The Seven Best Cities for Photography

Travel is the gift that keeps on giving. Ask any avid explorer, and they’ll tell you: the real value of a journey goes far beyond a handful of days spent in a foreign land. It’s also in the excitement of planning, the anticipation, and the priceless memories that remain long after the suitcases are unpacked. It’s the reason we’re so eager to immortalize our most cherished adventures through souvenirs, stories, and of course, snapshots.

A great travel photo tells a story. Whether you’re sipping a hot café au lait on the banks of the Seine, mugging for the camera atop the summit of Machu Picchu, or huddled under an umbrella on the rain-slicked streets of Dublin, what makes a travel photo truly special isn’t just the exotic locale, but your unique experience within it.

Of course, it doesn’t hurt to start with a breathtaking setting. With that in mind, we wanted to share a few of our favorite destinations for incredible travel photography.

One of the world’s oldest cities, no destination is as instantly recognizable as incredible Athens. Known as the cradle of European civilization, this 3,500-year-old Greek metropolis offers a bounty of snapshot-worthy sights for every traveler, from foodies and history buffs to shopaholics and amateur antiquarians.

Marvel at the bevy of landmarks to be found along Vasilissis Amalias Avenue, a major thoroughfare leading to the Olympieion, Ancient Agora, and Arch of Hadrian (among innumerable others). Afterward, unwind with a dose of retail therapy at Monastiraki, an eclectic street market offering everything from textiles and home goods to vintage books and antique coins. You just might stumble upon that perfect, one-of-a-kind gift for a loved one back home — but either way, you’re sure to capture some striking photos among the densely packed stalls.

Of course, no voyage to Athens would be complete without a visit to the city’s most iconic site: the Acropolis. Join a scenic, guided driving tour to this 2,400-year-old citadel, where sweeping views of both the Parthenon and the ancient city below will have you saying tyrí (cheese) and smiling from ear to ear. 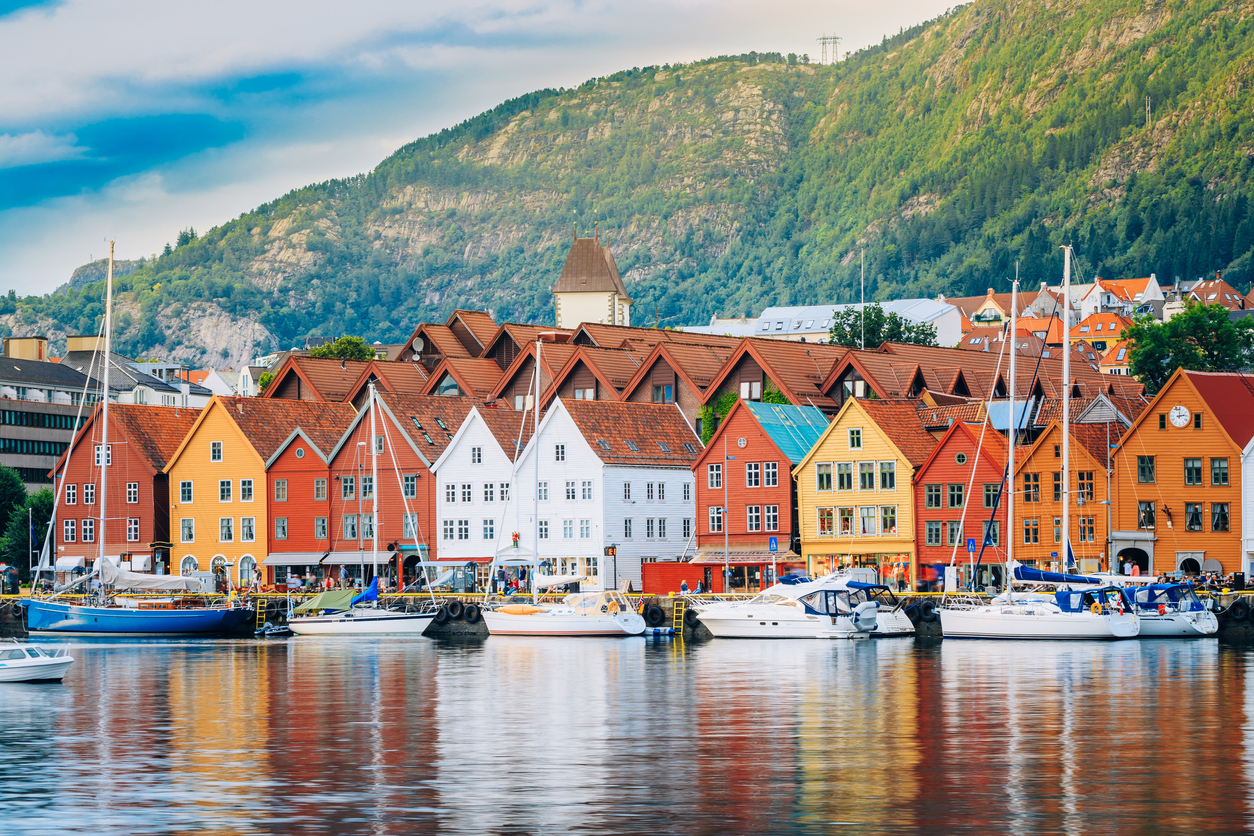 As a gateway to awe-inspiring fjords, it should come as no surprise that Norway’s second-largest city is a shutterbug’s paradise. Located on the country’s western coast and framed by towering mountain ranges, Bergen’s quaint, cheerful streetscapes and abundant natural beauty make it an ideal destination for those intent on honing their craft behind the camera.

Affectionately dubbed the “City of Wood”, Bergen is home to the charming Bryggen district, a UNESCO World Heritage Site of brightly painted wooden buildings that line the eastern side of the city’s Vågen harbor. Snap a few photos as you stroll along the colorful docks, then warm up with a cup of fresh-brewed kokekaffe before boarding the Mount Floyen funicular for breathtaking views of the town below.

Looking to immerse yourself even more deeply in Norway’s stunning landscape? Make a day trip out of town to a charming hotel in nearby Norheimsund. Along the way, you’ll pass through quaint market towns, rugged mountain gorges, and windswept plateaus. You’ll even get the chance to snap a few pictures in front of the stunning Fossen Bratte waterfall.

Start planning your photographic journey through the Land of the Midnight Sun when you browse our upcoming voyages to Norway. 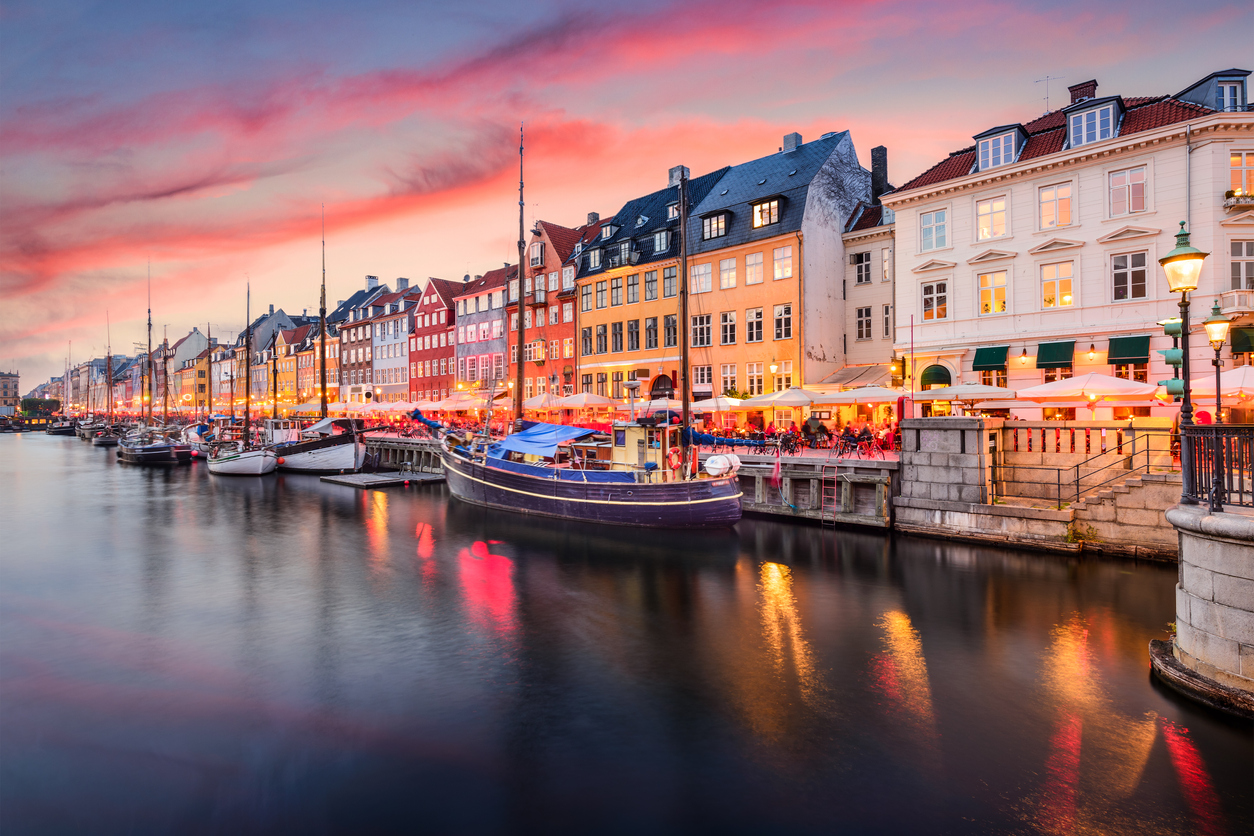 History buffs, art aficionados, and literature lovers alike will fall hard for the unforgettable beauty of charming Copenhagen. A city cyclist’s wonderland, Copenhagen’s streets are among the most bike-friendly in the world, making it a breeze to explore on two wheels. Infused with a laid-back, coastal vibe, this exceptionally photogenic city consistently ranks among the happiest on earth — and it’s easy to understand why! In true Danish fashion, Copenhagen’s abundant historic buildings and colorful homes are infused with a hygge (coziness) that is sure to make you feel right at home.

Of course, Copenhagen isn’t all cozy cafés and warm woolen socks. Travelers yearning for a touch of grandeur can give their photos the royal treatment on a tour of Christiansborg Castle, Rosenborg Castle, and Amalienborg Palace, the present-day home of the Danish royal family. Gaze on the glittering crown jewels and sumptuous coronation regalia before continuing on to Tivoli Gardens, where you can pose for photos under the amusement park’s imposing stone archway.

Hoping to capture the City of Spires from an exciting new vantage point? Embark on an evening cruise through the canals, where you’ll be treated to the intoxicating romance of the city lights and breathtaking panoramas of the Copenhagen skyline.

Browse our upcoming voyages to Copenhagen and start daydreaming about your next Danish adventure today! 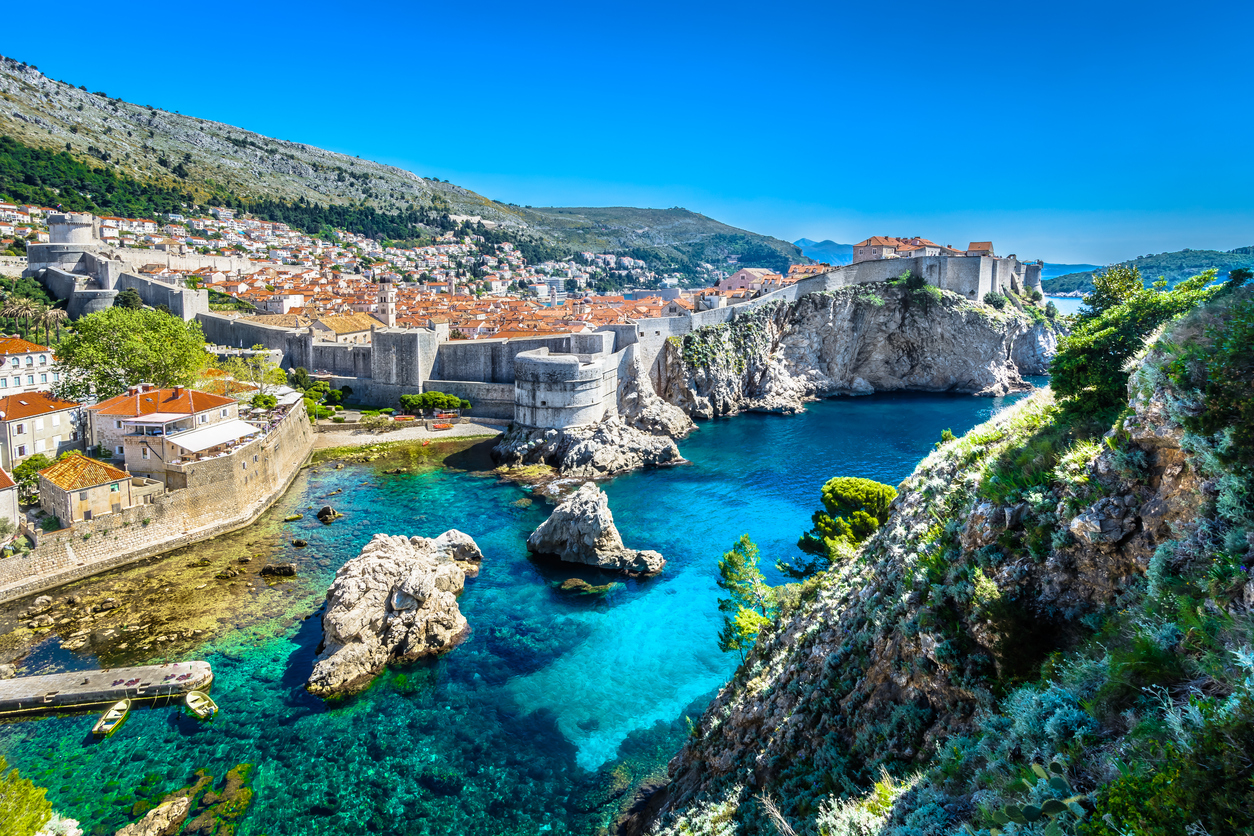 The great Irish playwright George Bernard Shaw once quipped that “those who seek paradise on earth should come to Dubrovnik and find it” — and honestly, we’d have to agree. A UNESCO World Heritage Site, this spectacular walled city boasts an impeccably preserved Old Town that’s no stranger to the camera, having stood in as the port of King’s Landing in HBO’s hit Game of Thrones series.

Affectionately dubbed the “Pearl of the Adriatic”, Dubrovnik’s domed churches, verdant gardens, and distinctive red roofs of vibrant kupe kanalice tile are nothing short of breathtaking. Walk the medieval walls of the city to the imposing Pile Gate, a 15th-century stone fortification that will make you feel as if you’ve stepped back in time. Or, for a bird’s eye view, ride a cable car up to the top of Mount Srd, where you can capture breathtaking vistas of the city below.

Of course, a seaside town like Dubrovnik offers much to see beyond the city’s walls. For a taste of stunning coastal scenery, board a sleek Mercedes Benz Sprinter van for a panoramic tour of the Adriatic Coast, stopping for photographs at Franjo Tuđman Bridge and the charming fishing town of Bosanka.

Plan your own escape to paradise on earth when you browse our upcoming Azamara voyages to Croatia today. 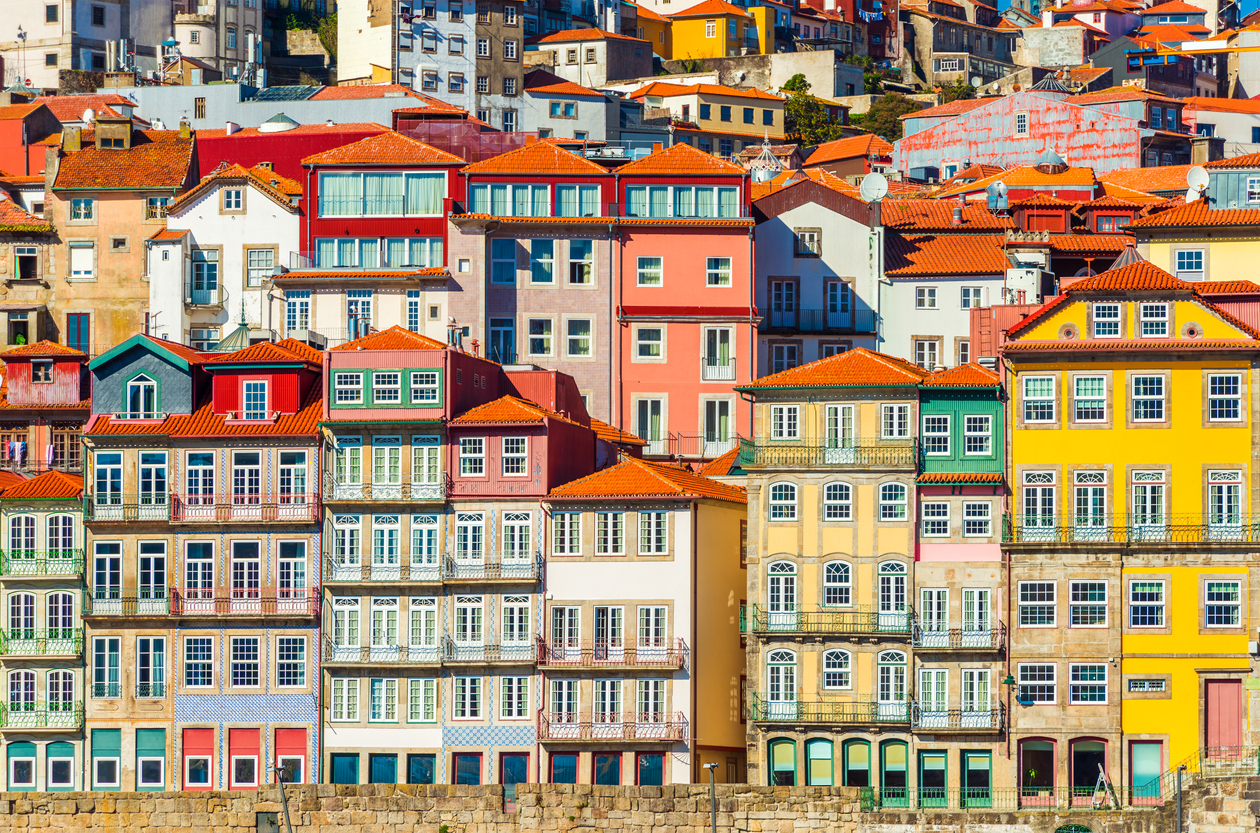 Famous around the world for its namesake fortified wine, Portugal’s second-largest city is, for our money, also its most photogenic. Dubbed the “City of Bridges”, Porto is a densely packed warren of Baroque, Gothic, and Romanesque buildings clinging to the undulating hills and picturesque banks of the Rio Douro, giving you no shortage of scenic locations to capture that perfect shot.

Start your day with a stroll through the iconic streetscapes of the Ribeira Quarter, a UNESCO World Heritage Site famed for its historic, brightly painted buildings and terracotta roofs. Then, be sure to snap a picture or two inside the nearby Livraria Lello, one of the city’s oldest bookshops, whose eclectic forked staircase is said to have been the inspiration for the interiors of the fictional Hogwarts castle.

For those looking to avoid huffing and puffing along Porto’s infamously hilly streets, a hop-on, hop-off bus tour through the city offers the ideal way to take in the sights at a more leisurely pace. Onboard, you’ll be provided with a route map and headphones narrating the various attractions as you go, so you can pick and choose the sites that most appeal to you (and your camera!), from the Gothic splendor of Porto Cathedral to the lush, swaying palms of Morro Gardens.

Dreaming of your very own picture-perfect Porto adventure? Explore our upcoming voyages to Portugal today. 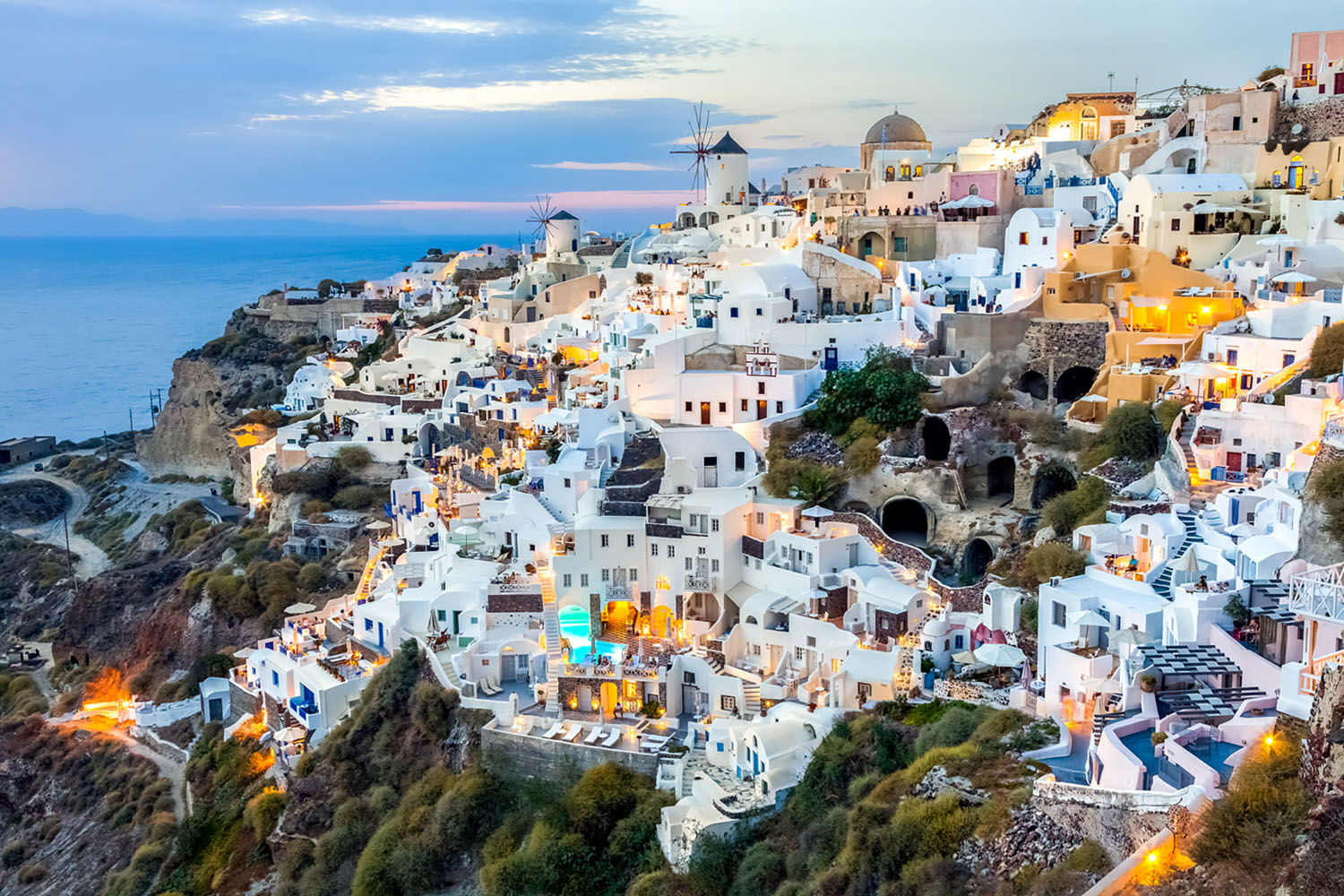 If you close your eyes and imagine a getaway to a sun-soaked Greek island, chances are Santorini is precisely what you’re picturing. Azure domes, whitewashed walls, sunsets bathed in an otherworldly golden light — that’s the magic of Santorini. Nicknamed “the Wine Island”, it’s the perfect place to slow down and savor life at a more relaxed pace.

With stunning streetscapes and incomparable ocean views around practically every corner, you won’t have to work hard to capture beautiful pictures here. From the harbor, take the cable car 900 feet up to the rim of the caldera and the island’s capital, Fira, where you’ll be treated to incredible views of the town and coast below. Or, for something truly spectacular, take a guided tour of the once-buried city of Akrotiri, a Bronze Age settlement destroyed in 1450 BC by the same volcano that’s said to have claimed the lost city of Atlantis.

Craving a dose of that famous Santorini sunset? Explore our upcoming voyages to Greece today. 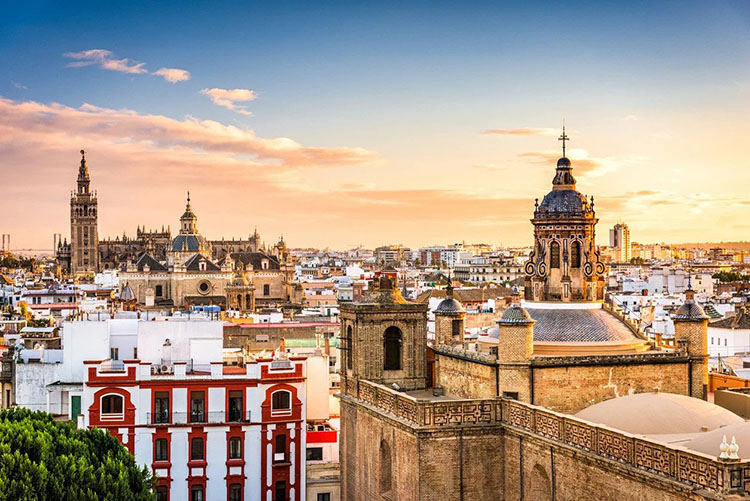 If you want to unleash your inner artist behind the camera lens, look no further than sun-drenched Seville. The cultural capital of Spain’s southern Andalusia region, Seville’s laid-back atmosphere, unique architecture, and world-class art scene offer ample inspiration for both visitors and locals alike.

The fourth-largest city in Spain, Seville represents a veritable crossroads of civilizations, where Roman and Moorish influence can still be seen in the design of some of the city’s most breathtaking buildings. See for yourself on a guided driving tour through the classic sites of Seville, including the Alcázar, a former royal residence, and the opulent halls and lush courtyard of the Palacio de las Dueñas.

Of course, no visit to the birthplace of tapas would be complete without an authentic Spanish tapas tasting. Cruise the Guadalquivir River and brush up on your food photography while sampling beloved Iberian Peninsula delicacies like caña de lomo, Andalusan fried fish, pork loin with patatas panaderas, and pionono de anís.

Hungry for a taste of spectacular Seville? Check out these upcoming Azamara voyages to the homeland of flamenco and fiesta.

If it’s true that a picture is worth a thousand words, then the photos from one of these incredible Azamara voyages would be enough to furnish the Great Library of Alexandria. From opulent palace halls to rugged mountain peaks, there are so many spectacular sights just waiting to be explored.

So, where will your camera lead you next? Start exploring our selection of unforgettable country-intensive voyages, immersive experiences, and exciting land programs today, and find your next picture-perfect adventure.

Bergen, Norway, has long been a favorite port for many of us here at Azamara, including Captain Johannes and Dale Gillings. Because we've had the...