Greek Music: The Sounds of Our Favorite Travel Destinations

If you’ve spent any time in Greece, you know there’s a rhythm to this sun-kissed nation. You see it everywhere, from the streets to the soccer pitches, the remote islands to the city centers. Music permeates the culture, and absorbing these songs is sure to be a highlight of any visit.

There’s no doubt about it, if you’re a music lover, a trip to Greece should be on your list of must-visit destinations.

Today, we’re sharing the sweet sounds of Greek music with you. We’ll explore its history and some of the signature styles that help make it so unique. We’ll even be sharing a few of our favorite Greek songs. So put on your dancing shoes, or at least your headphones. This guide is sure to have your toes tapping.

A Gift From the Gods 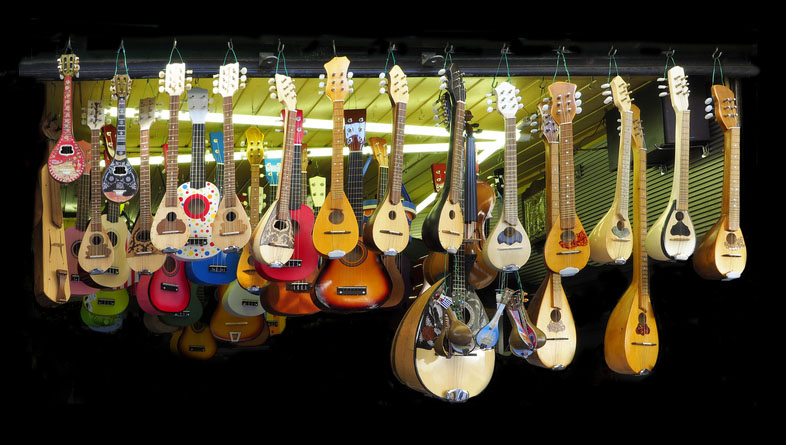 Music, the Ancient Greeks believed, was a gift from the Gods — and something that could have significant moral and emotional impacts on a listener. For many, these feelings still ring true today. Just think about putting on your favorite song and the way it makes you feel.

Many musical instruments, the Greek’s believed, were created by their ancient deities. For example, Athena created the flute, the panpipes were attributed to Pan, and the lyre to Hermes. In fact, the lyre is the oldest Greek musical instrument — and there are stories of the God Apollo mastering the instrument and using it to defeat the nature spirit Marsyas in a musical duel. For those keeping track, this is long before the devil and Robert Johnson made their infamous deal at a Mississippi crossroad.

It should come as no surprise that Greek music has a diverse history. After all, since ancient times, the Greeks have explored cultural influences from around the world — and the birthplace of Western civilization is not without its fair share of influence from the East. Today, our understanding of ancient Greek music comes from unearthed fragments and artifacts, literary references to musical practices, and archeological references to monuments paying tribute to accomplished musicians and elaborate music halls. Music has always played a key role in Greek culture, from as far back as Antiquity. Ancient Greek theater, dance, and poetry are all colored by music. In fact, a musical education was considered essential. Boys would begin an intense musical education beginning as early as age six, learning about acoustics, harmonics, and melody. As the boys grew into men, they would often sing in choirs, performing for important celebrations, marriages, funerals, and simple entertainment.

Over time, more and more influences made their way into Greek music — shaping its sound. During the Byzantine Empire era, the music of Greece shifted from entertainment to more of a pastoral style, with a focus on the church. Music became the center point of religious occasions (such as the Dionysia festival in Athens), with hymnals being sung during processions. During the Ottoman era, Greek music was once again inundated with outside influences. This time, from the East.

The Music of the People 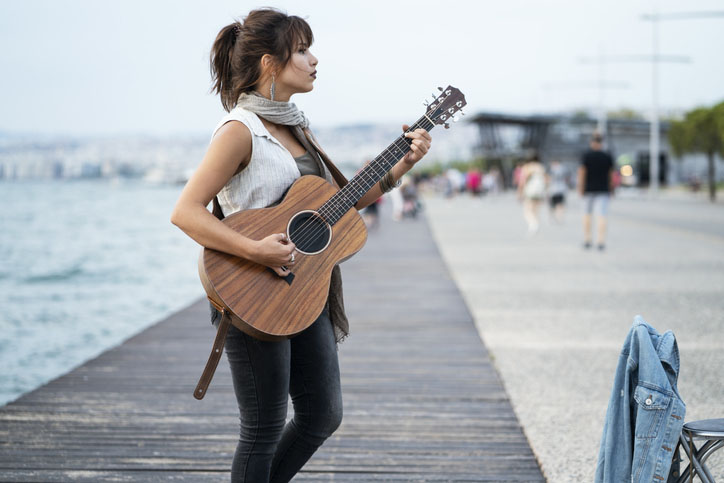 So much of the music of Greece was born out of Greek theater. Stories of love and loss, bravery and struggle, freedom and hardship have always been at the center of the country’s musical repertoire. So it should come as no surprise that folk music has a special place within Greek culture. Spread across Asia Minor by Greek refugees, Greek folk music is continuously evolving and is full of fascinating regional distinctions. One of the most popular forms of Greek folk music is Rebetiko. Roughly translated, Rebetiko is the plural form of the English word, rebels, which makes sense, given its origins as a form of protest music. This music takes cues from a variety of European styles and mixes them with distinct Greek musical sensibilities. Look closely enough, and you can find Rebetiko influences in modern Greek pop, rock, and even hip-hop music. Rebetiko was even named to the UNESCO Intangible Cultural Heritage List in 2017 for its profound impact.

Emerging from Rebetiko was another popular type of music, Laïko. Meaning the song of the people, Laïko gravitated toward more pop sensibilities and was the premier form of Greek popular music for many years. Even today, it continues to cultivate a strong following throughout the nation and around the world. 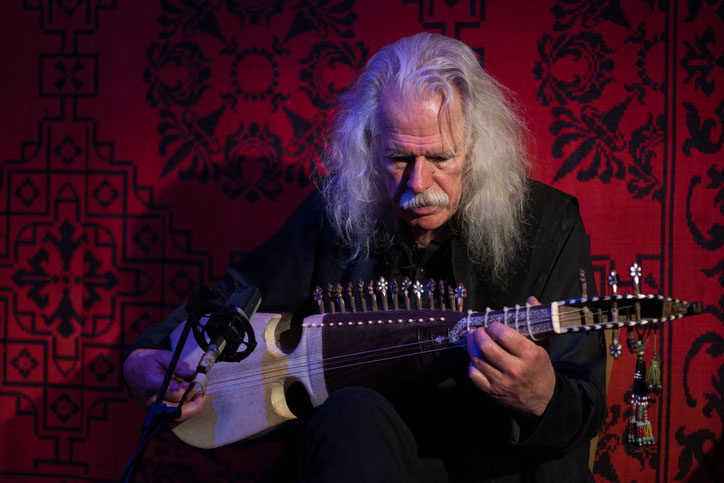 Of course, like most countries, the music of Greece is not merely one style. Throughout the country, there are regional varieties that offer plenty of music to your ears. In Crete, for example, the Cretan Lyra is a dominant instrument, often accompanied by the laouto and the askomandoura. Crete also has a rich folk dancing tradition in addition to music, and the songs you’ll hear here is often paired with pentozali, sousta, and syrtos (popular folk dances).

In the Cyclades’ ports like Syros, Paros, and Milos, Nisiótika folk music is popular. Meaning from islands, Nisiótika music enjoyed a level of isolation in its development that separates it from a lot of other Greek music. The violin is a popular instrument of choice here, as are folk dances like the ballos, lerikos, and trata.

The Instruments of Greek Music 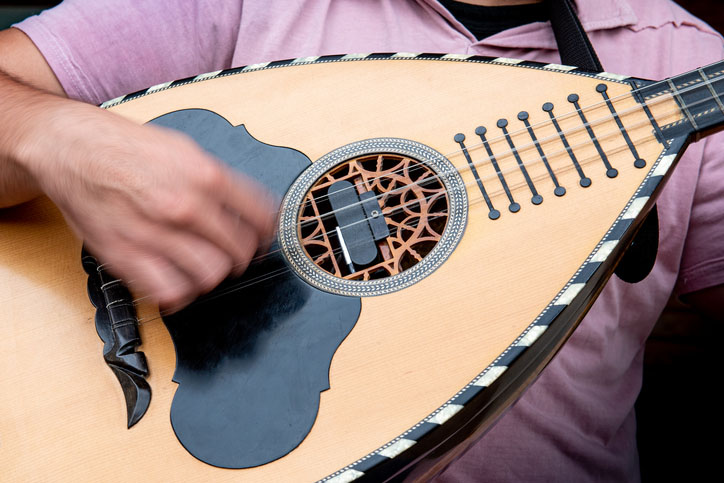 While Greek music is full of diverse instrumentation, there are a few instruments that most consider to be essential, including:

Hearing Greek Music For Yourself 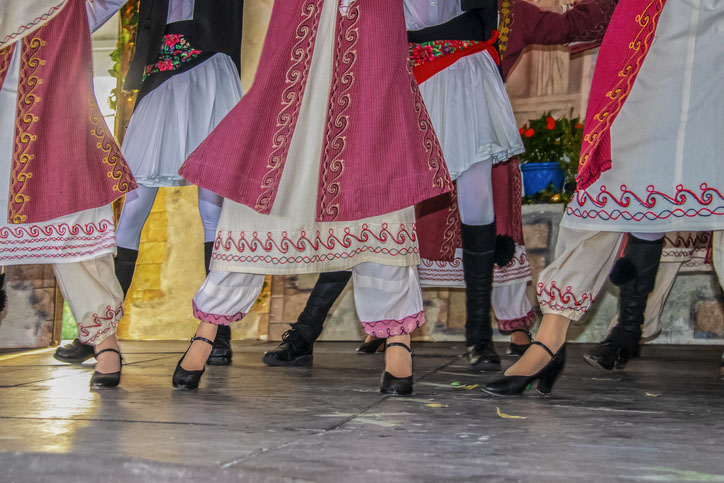 For many, talking about music is a lot like dancing about architecture. To truly understand its beauty, you must experience it. That’s why we’ve put together this playlist of Greek music for you. It explores different styles and eras, giving you a high-level look at the fantastic melodies drifting out of the nation’s bustling cities and remote islands.

Be sure to follow us on Spotify, where we’ll be sharing even more sounds of our favorite travel destinations in the future.

Are you ready to experience these sweet sounds for yourself? Then join us for an unforgettable musical journey through Greece! Check out our upcoming cruises to Greece today. And to stay up-to-date on the latest news, be sure to sign up for our email newsletter.