In a place as deliciously diverse as the Mediterranean, the variety in cuisine is reason enough to visit. And it wasn’t long ago that we brought you on a culinary journey through this region. Of course, as with every great recipe and dish, sometimes you just want to come back for seconds. That’s why today, we’re returning to the shores of the Mediterranean for another tasty tour of its culinary creations.

This time around at the buffet of Mediterranean meals, we’re taking a closer look at four countries. From the diverse landscape of Morocco to the harbors of Cyprus and Croatia, to the bustling streets of Egypt—foodies, pack your appetite (and maybe a notebook to jot down a few of your new favorite recipes)! 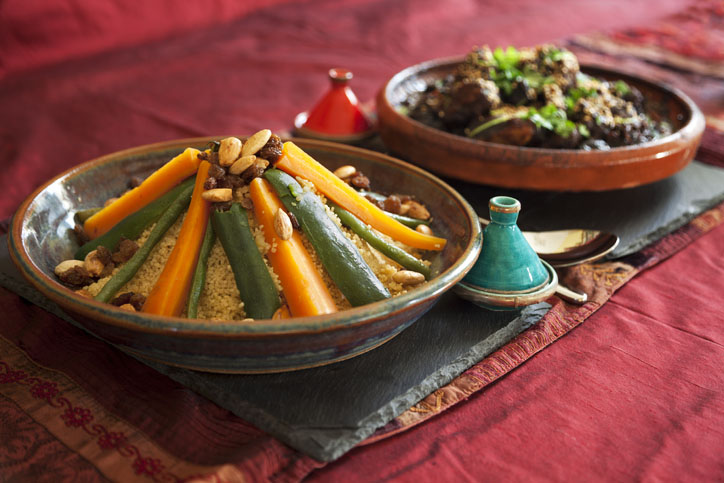 Amid spiny mountain ranges and sand-swept deserts, you'll find colorful heritage bursting with unique flavors in Morocco. At first glance, combinations like rich chicken pie dusted with icing sugar and cinnamon, or the tartness of preserved lemon rinds and green olives cooked into a chicken tagine, may seem at odds with your palate, but trust us—you'll be pleasantly surprised. Influenced by Berber and Arabic cuisine on the African continent and Andalusian and French cuisine from across the Mediterranean, these spice-forward but delicately balanced dishes should be on your must-taste list. 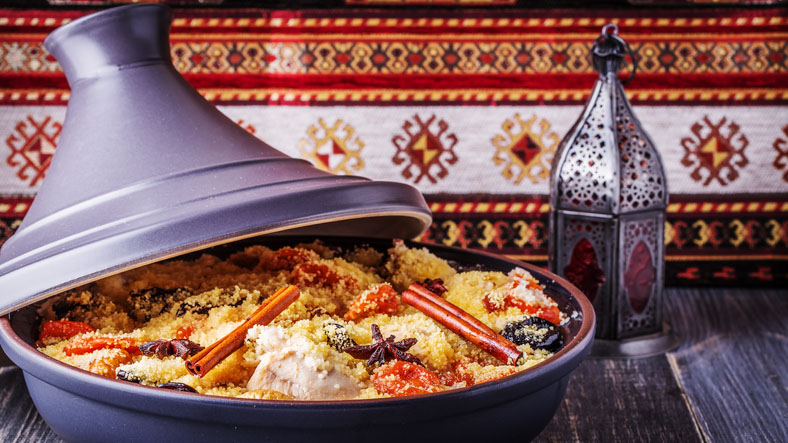 You’ve likely heard of, seen, or tasted this Moroccan staple served in a cone-shaped, clay cooking pot. Because a variety of meat and vegetables can be used to create the dish, the name refers more to the cooking vessel and method than the final results. Traditionally, when water was scarce, the domed lid was useful for keeping all those incredible juices and flavors inside, similar to a slow cooker. One of our favorites takes on the dish is lamb tagine, which takes on sweet and sour notes from the addition of dates and spices. Served everywhere from roadside stalls to gourmet restaurants, you’ll want to try it more than once. 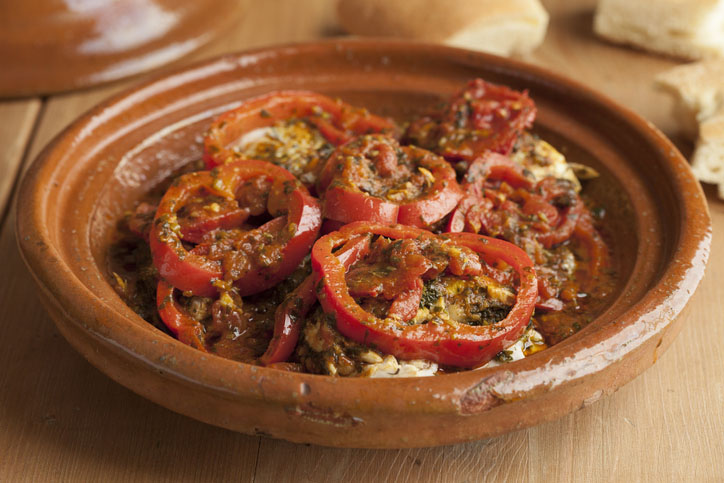 Part marinade, part relish, this pesto-esque sauce is most often used to cook and flavor seafood—which is served in abundance along Morocco’s Mediterranean and Atlantic coasts. Also found in Algerian, Libyan, and Tunisian cooking, the Moroccan version of chermoula includes dried parsley, cumin, paprika, salt, and pepper, along with olive oil and lemon juice. Sardines are popular here, and chermoula is often stuffed inside before they’re grilled over smoky coals.

Moroccan meals are typically served with a variety of hot and cold salads and sides to start. Zaalouk is common among them and is made from smoked eggplant and tomatoes with garlic, olive oil, paprika, cumin, and chili powder. If you're a vegetarian, you’ll be spoiled for choice in Morocco. 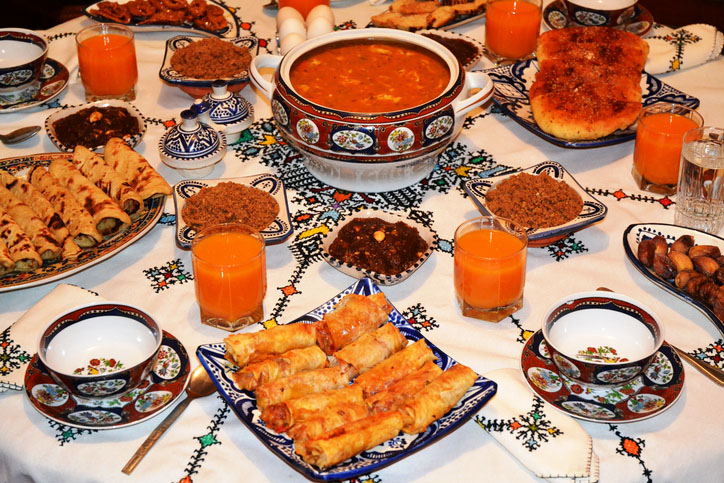 Served year round, harira soup takes on special meaning during the holy month of Ramadan. It is often served to break the daily fast at dusk. It's one of those dishes that cooks all day, and is definitely filling after an afternoon of exploring souks and fortresses. With a base of lentils, chickpeas, and tomatoes, it's regularly topped with a bit of chicken, beef, or lamb, and a squeeze of fresh lemon.

Want to try your hand at cooking some of these dishes yourself? Set out on this Moroccan Cooking Class shore excursion when you call on Agadir. 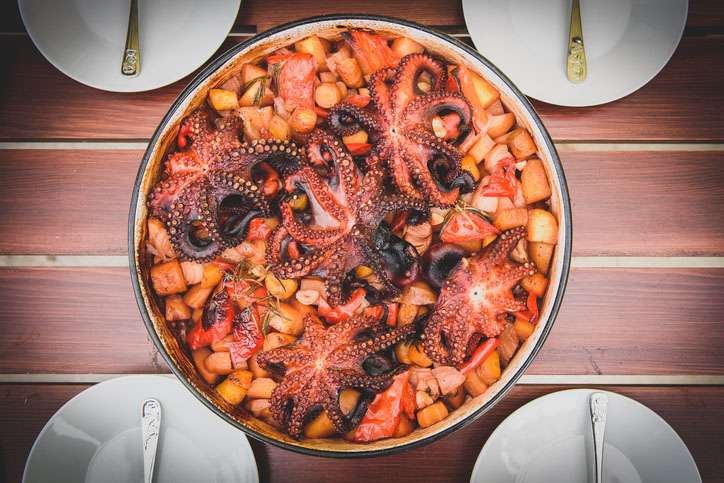 Picture azure waters framing medieval walled towns, lavender and coffee scent in the air and lemon trees lining the walkways. This is Croatia: rich in natural beauty, history, culture, and an array of culinary traditions. The country’s location at the intersection of Southeast and Central Europe along the Adriatic Sea means it has several influential neighbours, like Hungary, Italy, and Serbia. While many of Croatia’s more popular dishes can be found across the country, each is likely to have a local variant (or two!) that you can sample when you cruise with us. 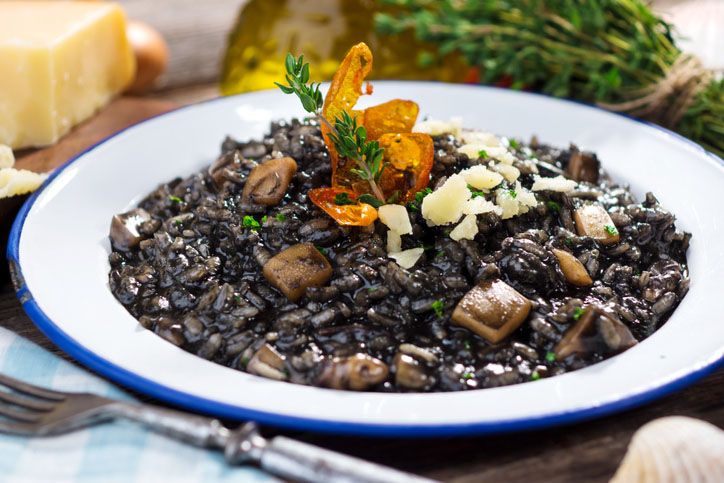 Known locally as Crni Rizot, this uniquely Croatian seafood and rice dish is dyed black thanks to it's not-so-secret ingredient: squid ink. Typically made with squid or cuttlefish, it’s a staple of menus along the Dalmatian Adriatic coast. Filling and flavorful, black risotto is sure to hit the spot for seafood lovers. 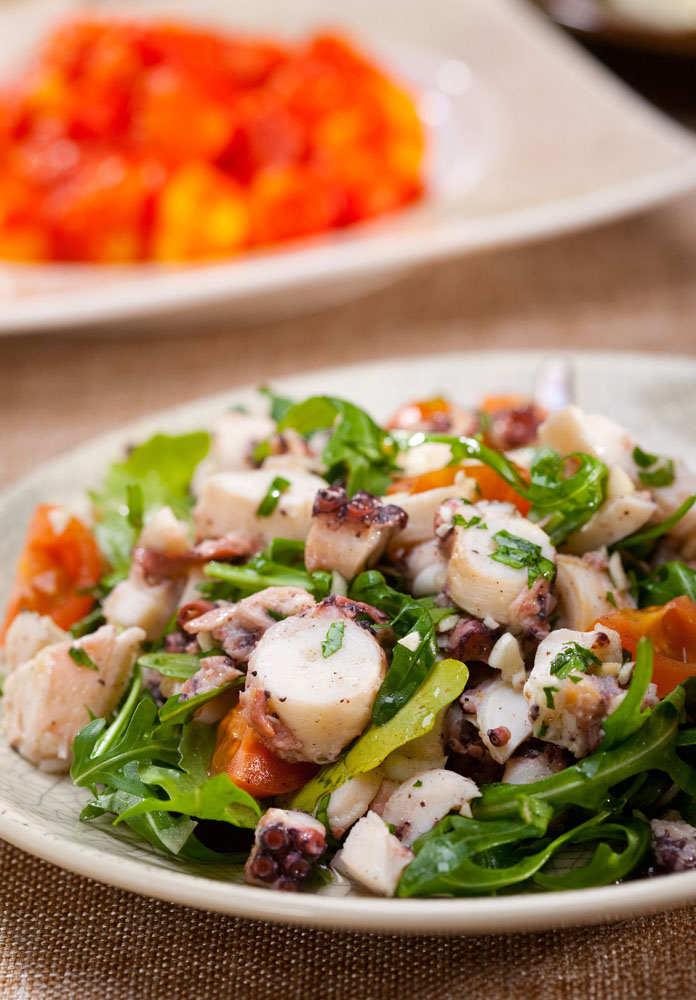 A refreshing appetizer for a light meal on a patio, salata od hobotnica is a medley of boiled octopus, onion, olive oil, parsley, and vinegar. You can find this dish scattered throughout the country with variants: try it on the island of Hvar (where they add potato and capers), or on Korčula (for an addition of zucchini and tomatoes). 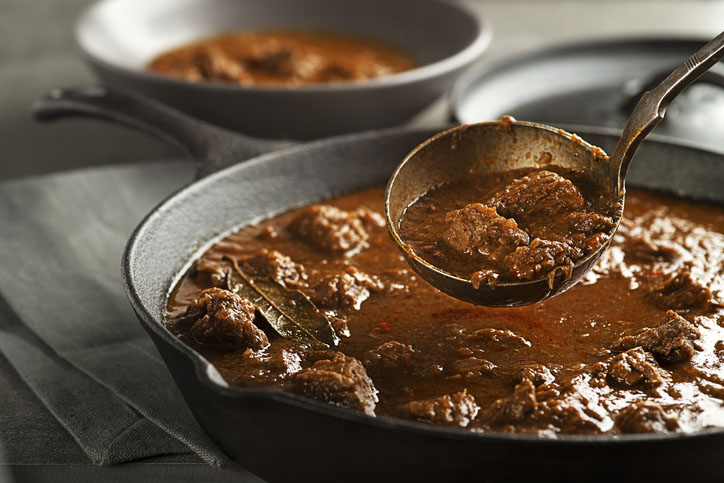 Thanks to the influence of their northern Hungarian neighbours, a range of goulashes (gulaš) are popular throughout Croatia. This slow-cooked stew is made with beef or game meat, white onion, garlic, carrots, and potatoes, along with generous amounts of paprika for seasoning. Like many of the stews in Central Europe, a hearty goulash is considered a signature comfort food for many Croatians.

The peninsula of Istria, jutting out from Croatia’s northwest region into the Adriatic, is an oasis of farmland and forest. The soil is so fertile here that, in fact, the area is known for its gourmet truffles. Locals say that once you get a taste of this earthy, woody delicacy, your taste buds won’t forget it. Try them in spreads, pastas, sweets or go hunting for them yourself!

Ready to taste the best of Croatia? Join us for a cooking lesson, or visit the Oyster Capital of Croatia on shore excursion.

Learn more about our upcoming cruises to Croatia today. 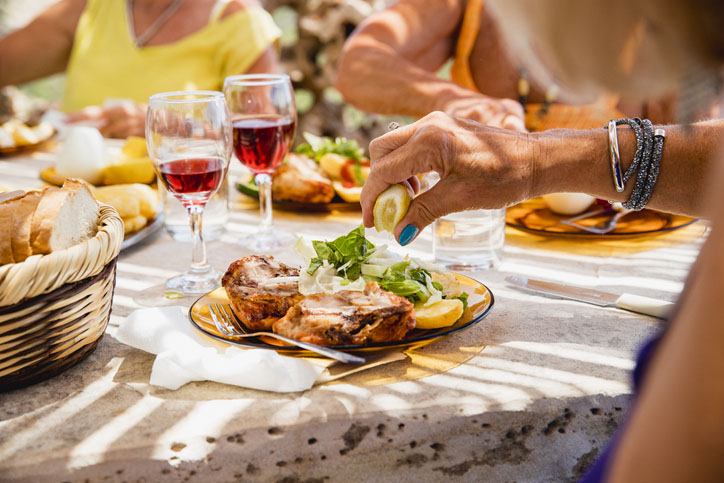 When most people think of an island nation, the first thing that may come to mind is beautiful beaches. And while the Cyprus coastline will not disappoint sun soakers, the island offers much more: from rugged landscapes to a hybrid of ancient cultures, Cyprus is rich with captivating experiences. Influenced heavily by Greek and Turkish culture, you’ll find many familiar dishes on the menu in Cyprus when we call on the port of Limassol. But where Turkish cuisines are more likely to heavily feature hot spices, Venetian flavors of mint, cardamom, and arugula have found a home in the kitchens of Cyprus over the centuries. 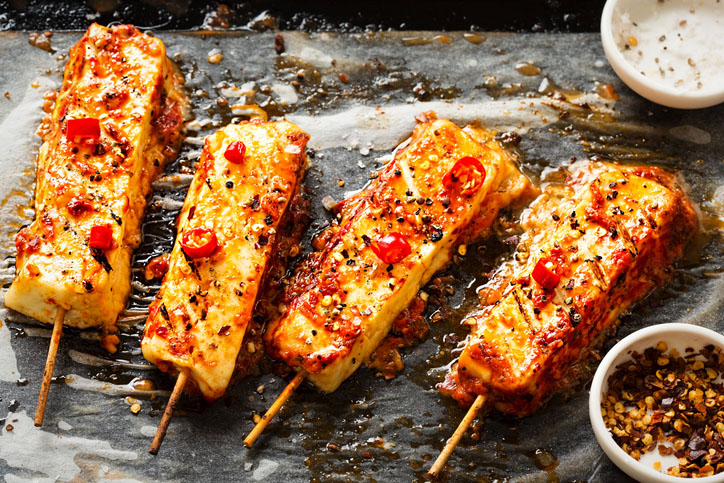 You’ve probably tried halloumi, but did you know its origins trace back to Cyprus? The rubbery cheese has a fairly mild taste and a squeaky texture. Its popularity extends to countries around Europe and throughout the Middle East. It’s made with a mixture of goat and sheep’s milk (and sometimes cow, as well). Unlike most cheeses, halloumi has a high melting point, meaning it can be easily fried up while still maintaining it’s texture. Try it on salads, in pitas, or simply grilled on it’s own. 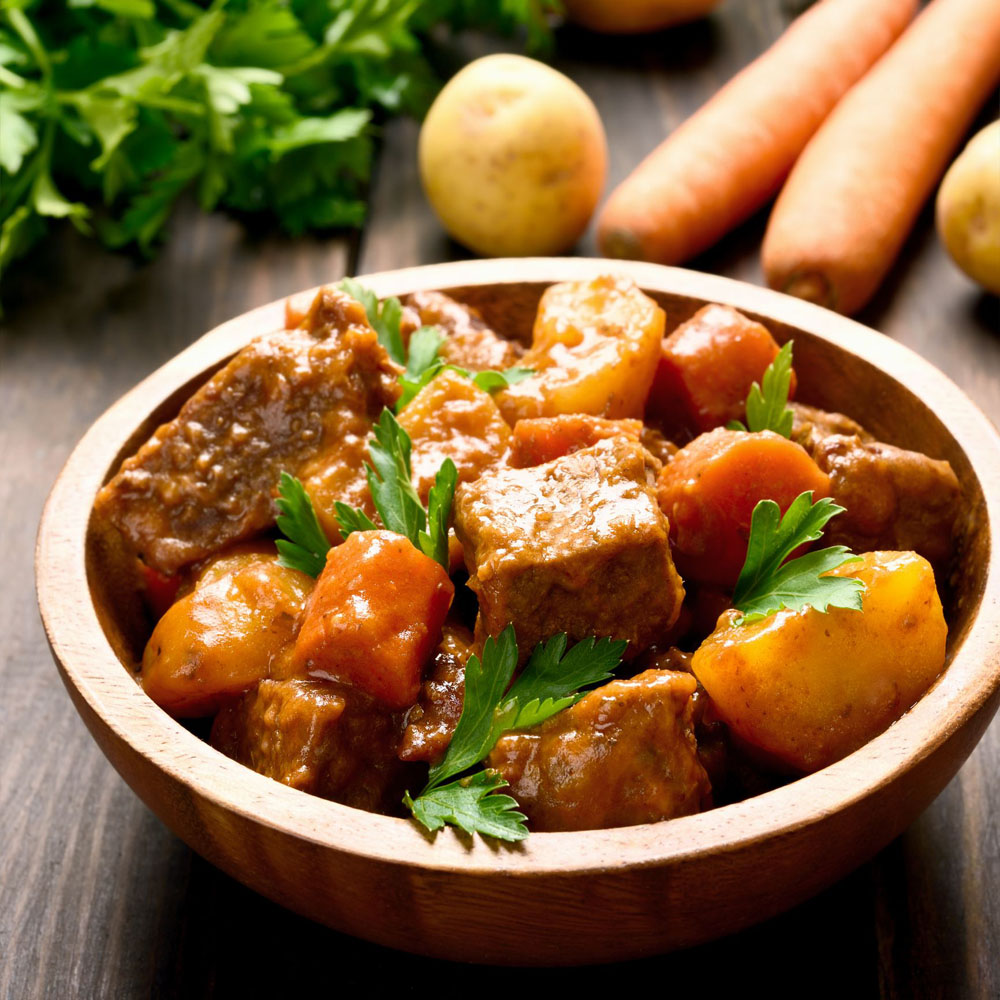 This traditional stew is popular in both Greece and Cyprus. The name comes from stufado, a dish originally brought over to Greece by the Venetians in the 13th century. It’s the kind of comfort food that reminds Cypriots of their childhood. Stifado is typically served with beef or rabbit, but may also be cooked with octopus, tripe or, sometimes, chestnuts. It’s a slow-cooked tomato-based dish, featuring whole onions for a robust flavor. 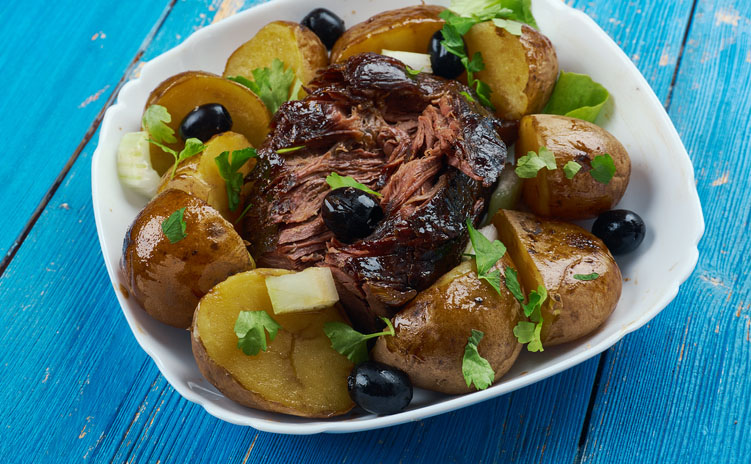 This dish has a great story: taken from the Greek word kleftes, meaning "thieves", the name of this meal translates to “stolen.” Myth tells us that bandits from the past known as the klephts would steal meat and hide it underground—allowing them to slow-cook it while also literally burying the evidence. Today, kleftiko has stolen the hearts of many a foodie. It’s a special-occasion lamb and potato dish made with patience. A leg or shoulder of lamb is marinated in garlic, olive oil and lemon juice for up to 24 hours before being cooked. Often served with a refreshing feta salad or yogurt dip, this dish is sure to steal your heart too. 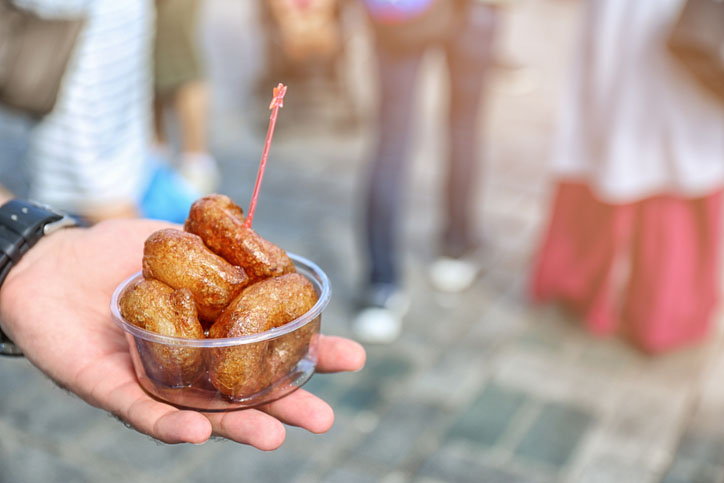 Fried, buttery dough, need we say more? These sweet, crispy balls are the perfect end to a meal, or snack amidst a day of exploring. It’s believed the loukoumades are among the oldest desserts on record in Greece. In fact, this treat can be traced back to the first ever Olympic Games in 776 BC. Coated in honey or sprinkled with cinnamon, loukoumades are a far cry from what today's olympic athletes eat, but they just might be the donuts of your dreams. Find them at festivals, sold from food trucks or fried up from street carts!

On a cruise to Cyprus with us, you’ll have the chance to learn the secrets of cypriot cuisine with talented local chefs, as well as take a tour of the homegrown flavors of the country. These are excursions you won’t want to miss! 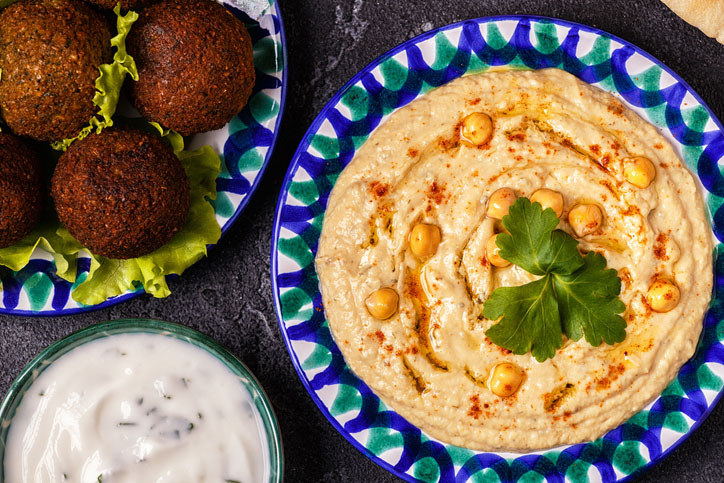 Egypt is known for its ancient pyramids and unforgettably blue waters. It’s the perfect destination for relaxing in the sun, as it’s said to be the driest and sunniest country in the world. The history of Egypt dates back to 3100 BC, making it one of the oldest civilizations in the history of humankind. Like the nation itself, Egypt’s food culture is deeply rooted in the past. Recipes are often passed down from generation to generation, with each adding their own touches—making for a thrilling dining experience.

One of the most common dishes in the Egyptian diet, ful medammes is made of lava beans cooked with oil, lemon juice, garlic, and onions. It can be served with a variety of different ingredients, including spicy oil, parsley, butter, tomato sauce, or boiled eggs—making it as versatile as it is delicious. For millennia, Ful medammes has been a staple of Egypt—by ancient pharaohs and contemporary Cairenes alike. Now that’s a throwback! 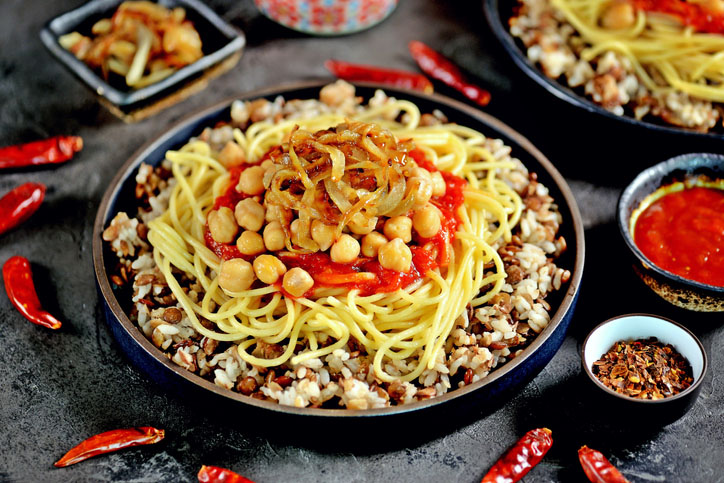 Street food is popular in Egypt, and kushari is the go-to on-the-go choice, especially in the capital city of Cairo. It’s a humble mashup of rice, chickpeas, pasta, and lentils sprinkled with fried onions and a dollop of spicy tomato sauce. Don’t let the understated ingredients shy you away: this local favorite is full of flavor and will keep you full all day long. 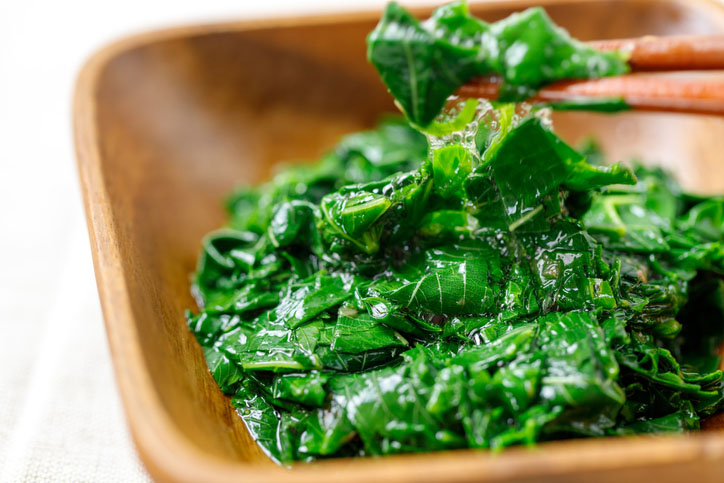 Mulukhiyah is made from the leaves of the corchorus olitorius vegetable: a somewhat bitter plant that is popular throughout Northeast Africa, and the Middle East. Like ful, it’s believed that mulukhiyah's origins also stem from Ancient Egypt. To prepare the dish, corchorus olitorius is boiled down into a soup and seasoned with coriander and garlic, and served with a protein, such as chicken, rabbit, or fish. 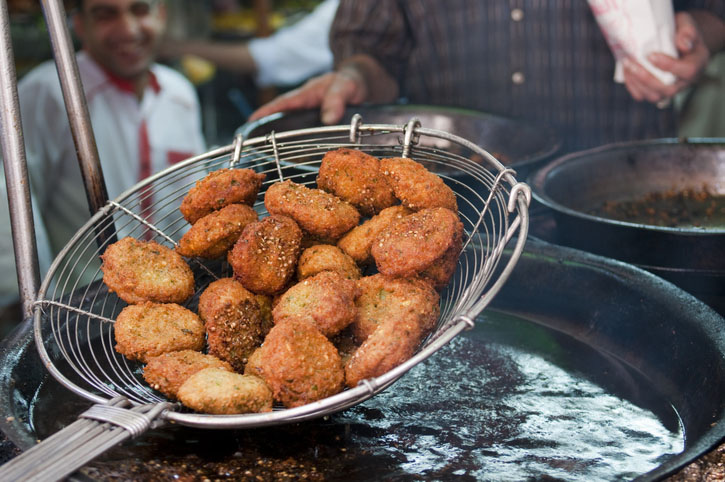 As is common throughout the Mediterranean, falafel is a popular option for vegetarians and meat-eaters alike. The Egyptian variation, known as ta’meya, is prepared with crushed fava beans as a base, and served on bread with tahini and vegetables. Famed by many news outlets, like the BBC and The Guardian, as “the world’s greatest falafel,” ta’meya is available everywhere from metal food carts to world-class restaurants.

Eager to explore Egypt? Check out our upcoming journeys to this ancient land.

Your Table is Ready

No matter your Mediterranean destination, the meals you enjoy along the way will play a huge part in your journey. They're a sign of love and community, and they bring people together. In this part of the world, sharing a meal offers a chance to celebrate the present, and appreciate the past. Visitors will find a meal for every mood throughout the Mediterranean, thanks to such a variety of rich flavours, and deep-rooted traditions.

Are you ready to dine around the Mediterranean? Join us for an unforgettable culinary cruise that’s sure to satisfy any appetite.