Culinary Culture Worth A Cruise to Alaska

Alaska is known for many things. It’s home to the highest peak in North America (Denali, which towers 20,320 feet above sea level), and more than half the world’s glaciers. It’s a vast and mountainous destination that has earned its nickname, The Last Frontier. Its national parks are an explorer’s dream come true, and it has more coastline than the entirety of the rest of the United States. Simply put, it is a region unlike any other on Earth. 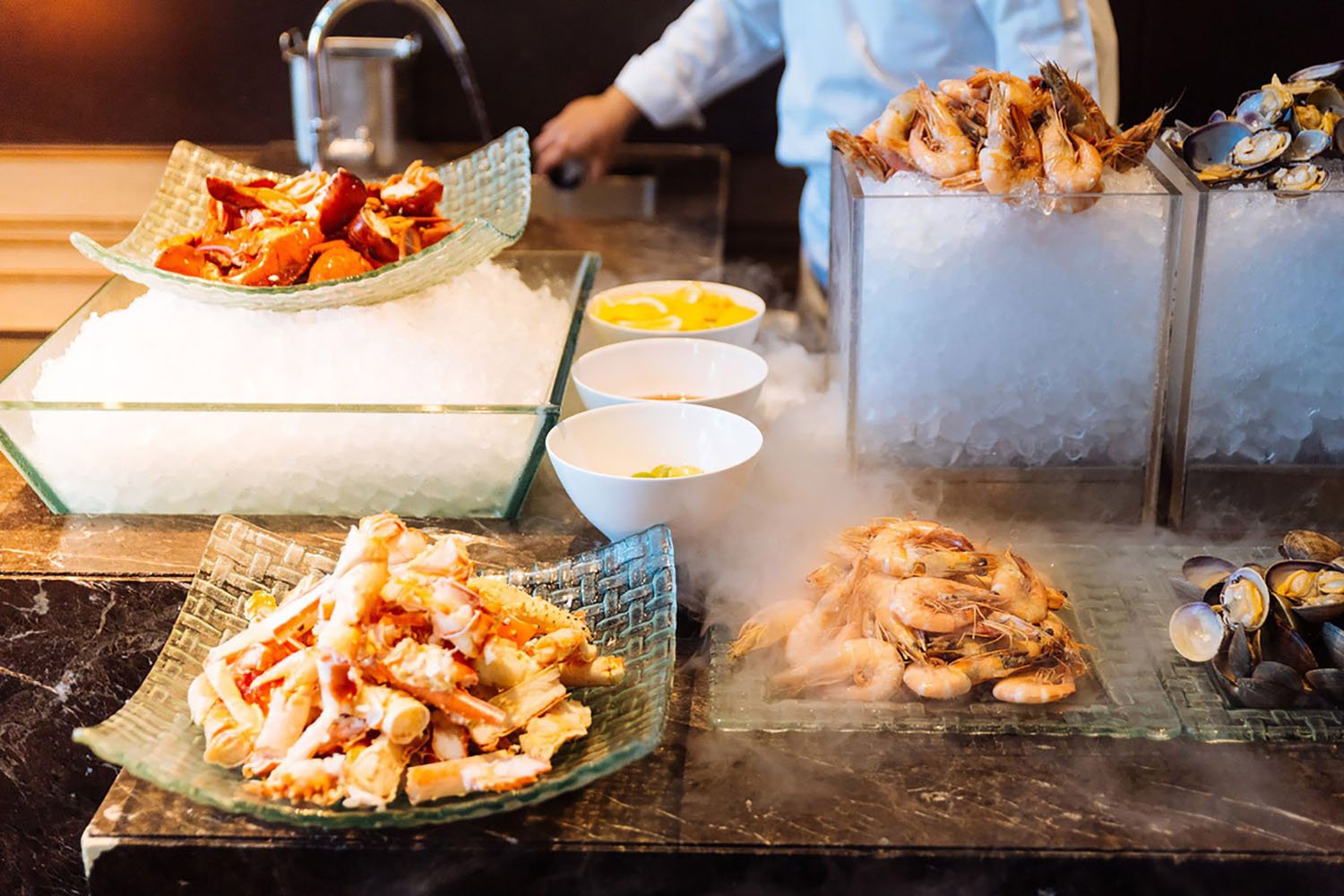 There’s something else Alaska is known for, though it’s easy to overlook amidst its natural wonders and rugged charms—its culinary culture. There’s no doubt this is a very unique foodie scene—one that may find you dining on some dishes you’ll never forget. When you cruise to Alaska with us, don’t forget to pack your appetite, and be ready to dine on a few of these distinctly Alaskan delicacies. 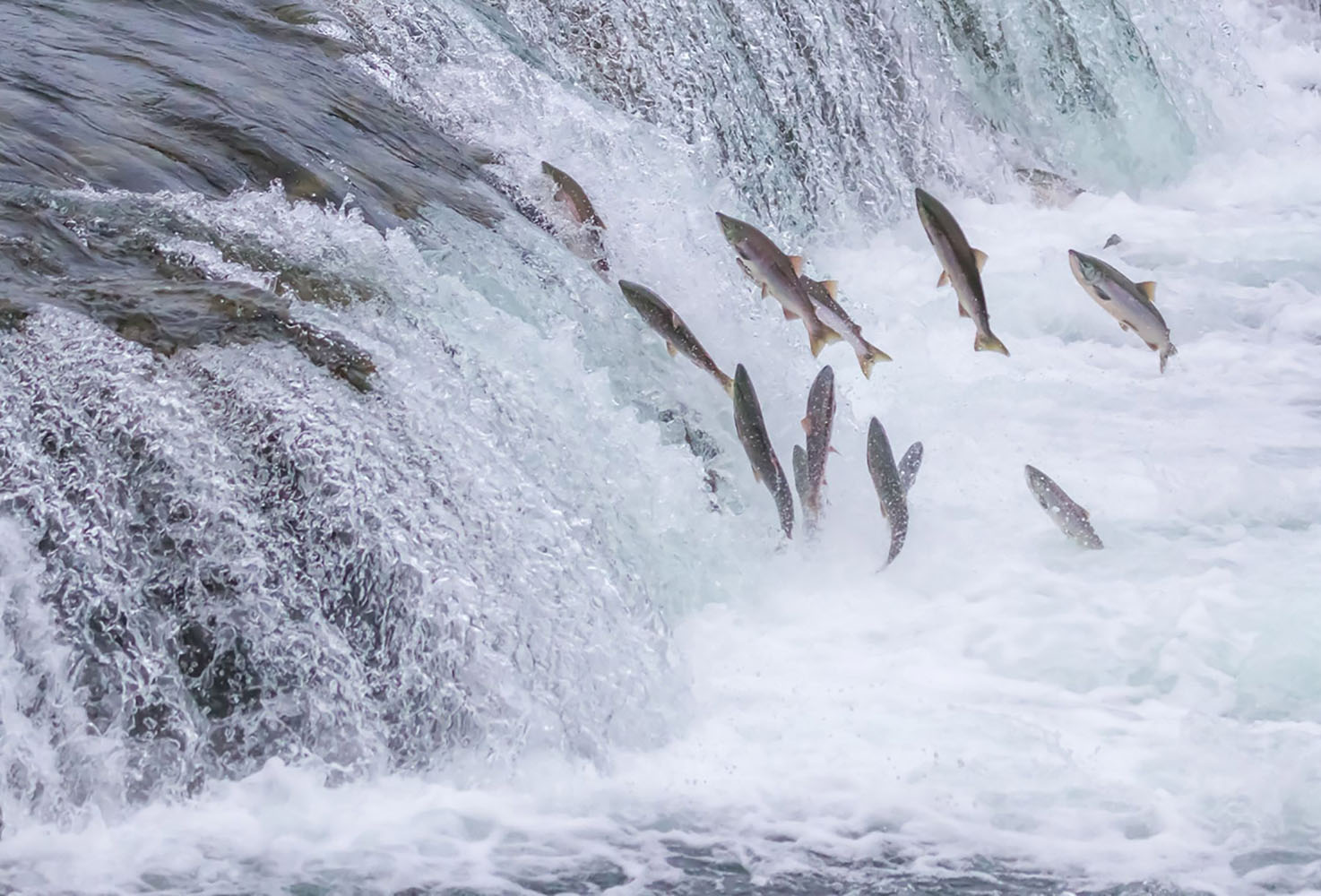 Fishing is a favorite pastime in Alaska, in fact, locals often refer to the sight of anglers lined up side by side in the rivers and streams as “Combat fishing.” Considering Alaska is known for producing some of the best fish in the world, this should come as no surprise. Of all the fish caught in Alaska, wild salmon is beloved by locals and visitors alike. It doesn’t hurt that there is such an abundance of wild salmon swimming through Alaskan waters.

Alaska is home to five unique wild salmon species: sockeye, silver, chinook, chum, and humpback. Of these species, the sockeye—also known as the red salmon—is arguably the most popular. It’s well known for its rich, full flavor, thanks in part to its high fat content (which it needs to survive in rough, frigid Alaskan waters).

Chinook salmon is also a beloved fish, especially with sport fishers and seafood connoisseurs. The largest of the wild Pacific salmon, the chinook is also known as king salmon. Its fat content is higher than the sockeye, and when properly prepared, king salmon is melt-in-your-mouth delicious. 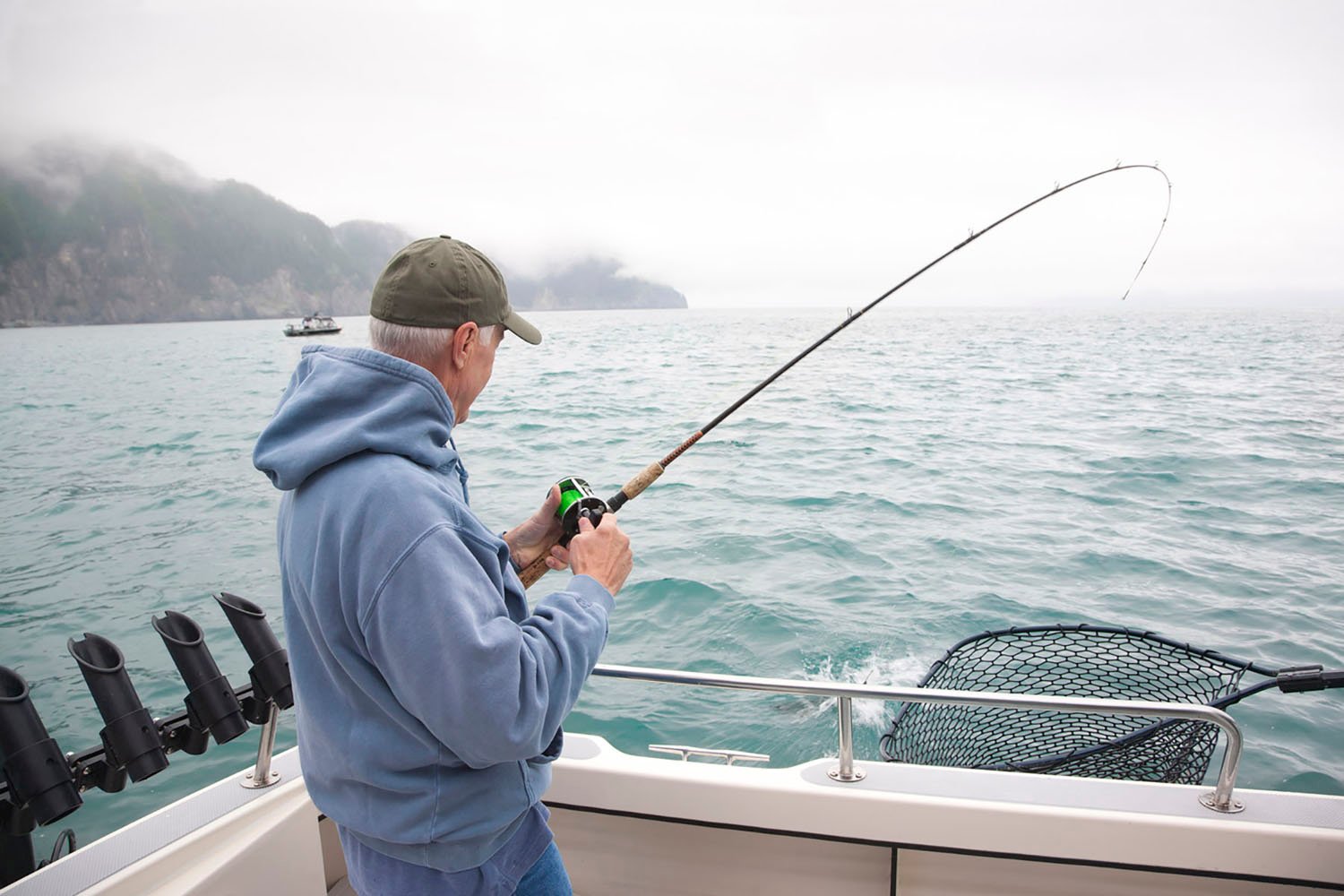 When you travel to Alaska with us, you can do more than dine on delicious salmon, you can hit the waters with experienced fisherman to try your hand at reeling in the catch of the day! You can even have your catch shipped to your home to enjoy when you return. 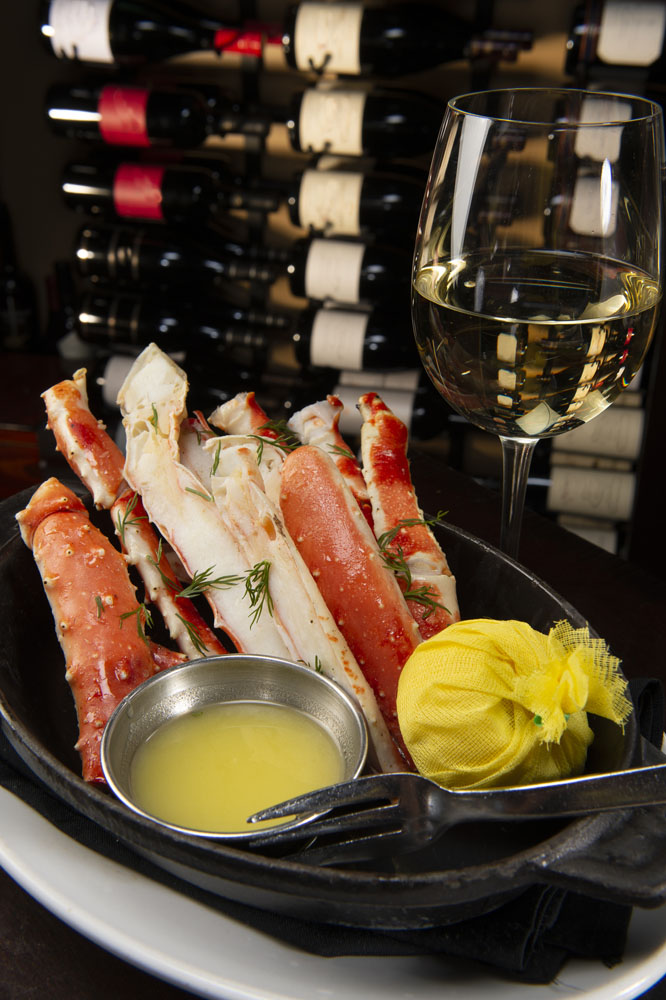 The king salmon isn’t the only royalty making its way through Alaskan waters. King crabs are also an unmissable treat to try during your cruise to Alaska. These crustaceans are hard to miss. In fact, they are among the largest in the world. Some weigh more than 20 pounds and sport legs that extend over six feet in length! As you can imagine, with legs that long, they are more than enough for a full meal.

Interestingly, size isn’t the most impressive thing about king crabs—that’s actually their unique flavor. Boasting a sweet taste in their tender meat that you won’t find in king crabs from other regions—this Alaskan specialty is best served with a side such as risotto and smothered in delicious garlic butter. 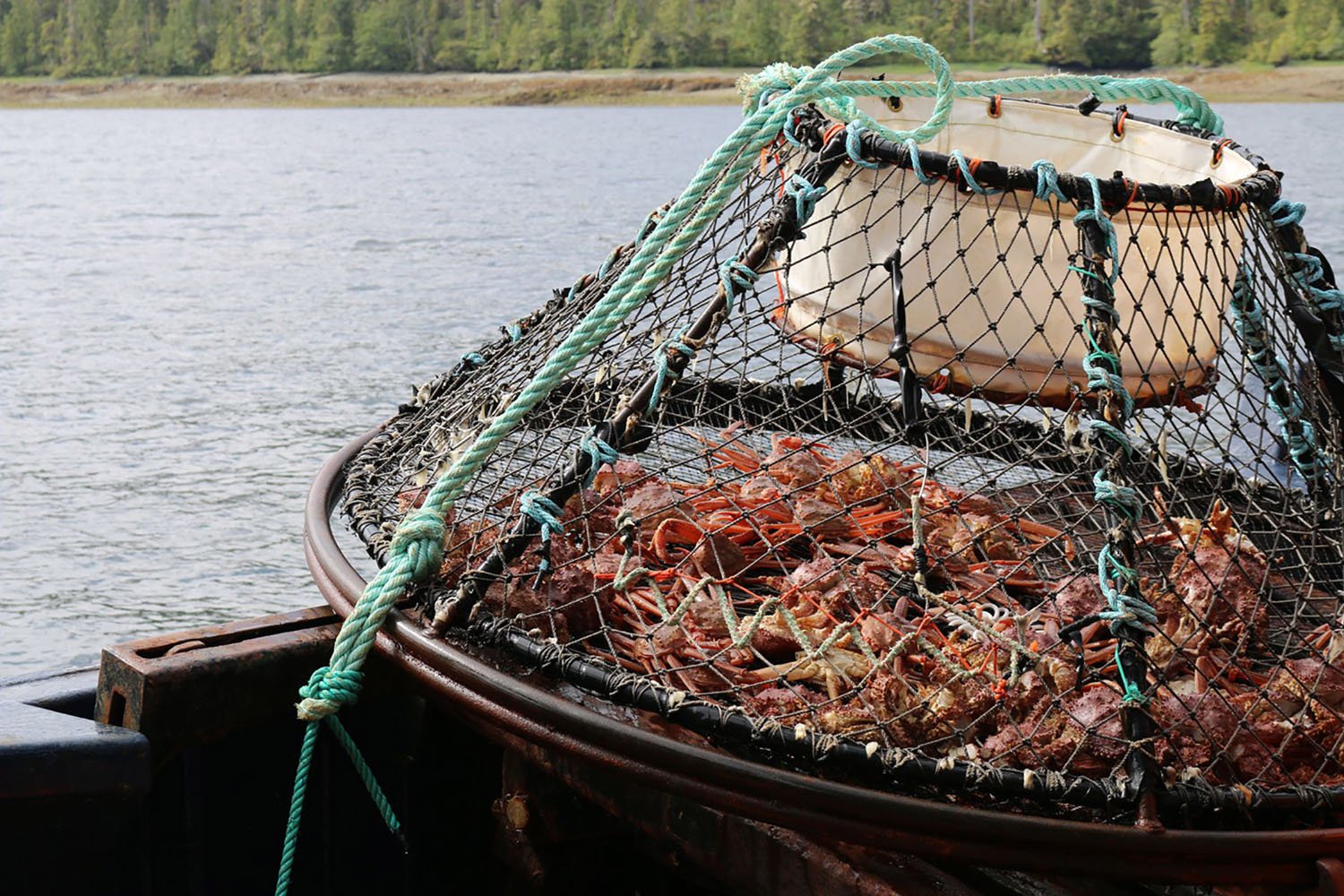 If you’re not only interested in eating crab in Alaska be sure to join us on our Bering Sea Crab Fishermen's Tour. This shore excursion will take you aboard the Aleutian Ballad—a crab fishing boat featured on the second season of the popular television show, Deadliest Catch—where you can see first hand how Alaskan crab makes its way from the water to the dining room. 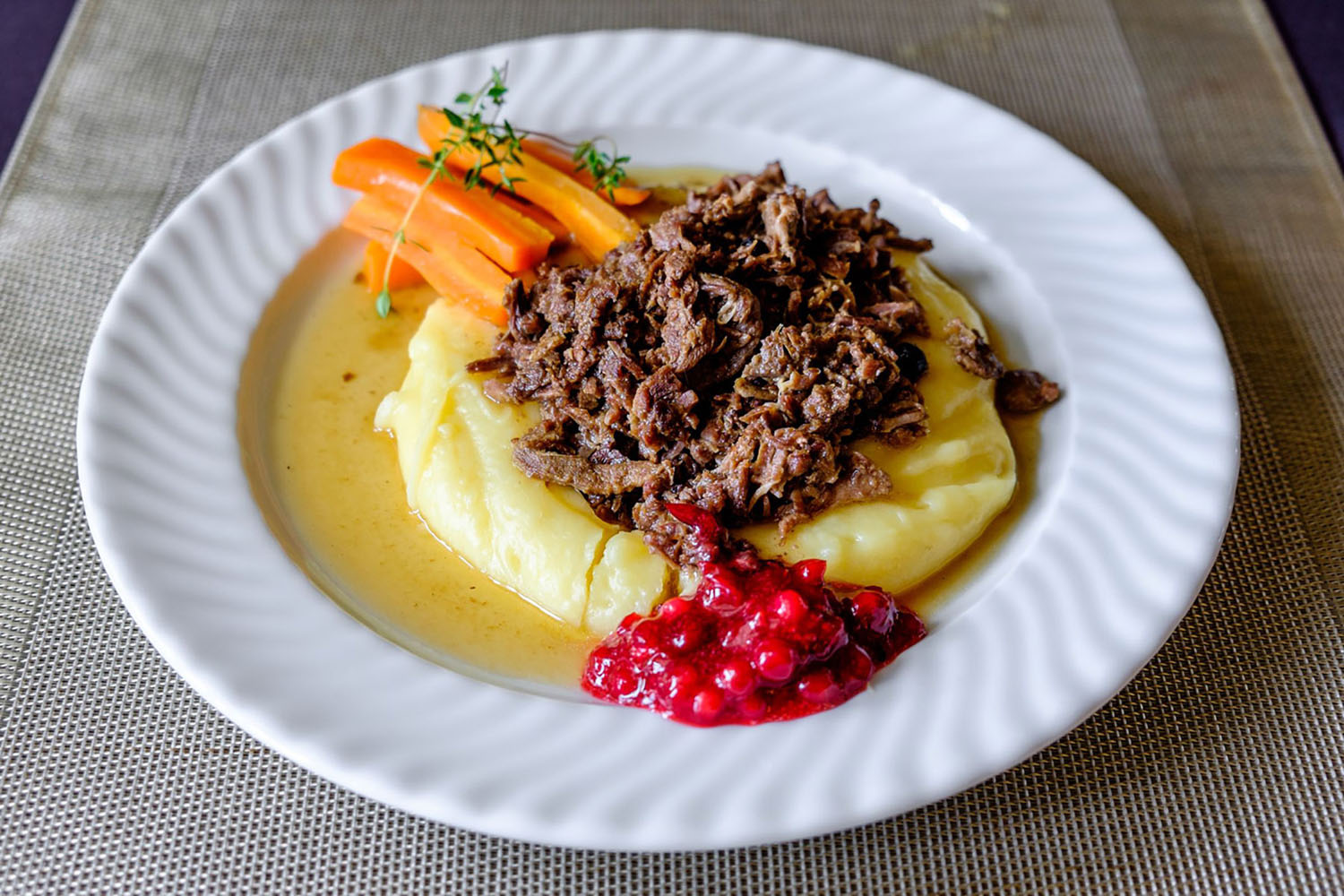 Don’t worry, taking a bite of a reindeer sausage or hotdog won’t get your name on any naughty lists. Reindeer meat is a popular option throughout Alaska because it’s leaner than alternatives such as beef or pork. Since their introduction into the Alaskan wilderness in the late 19th century, reindeer have proved to be a popular source of meat used for smoking and curing.

The beauty of reindeer meat (beyond its flavorful taste) is its versatility. You can enjoy reindeer sausage for breakfast, try a reindeer hotdog at restaurants around the state (or from street food vendors), dine on reindeer burgers or reindeer stew for dinner, and even grab a bag of reindeer jerky for your day of exploration. 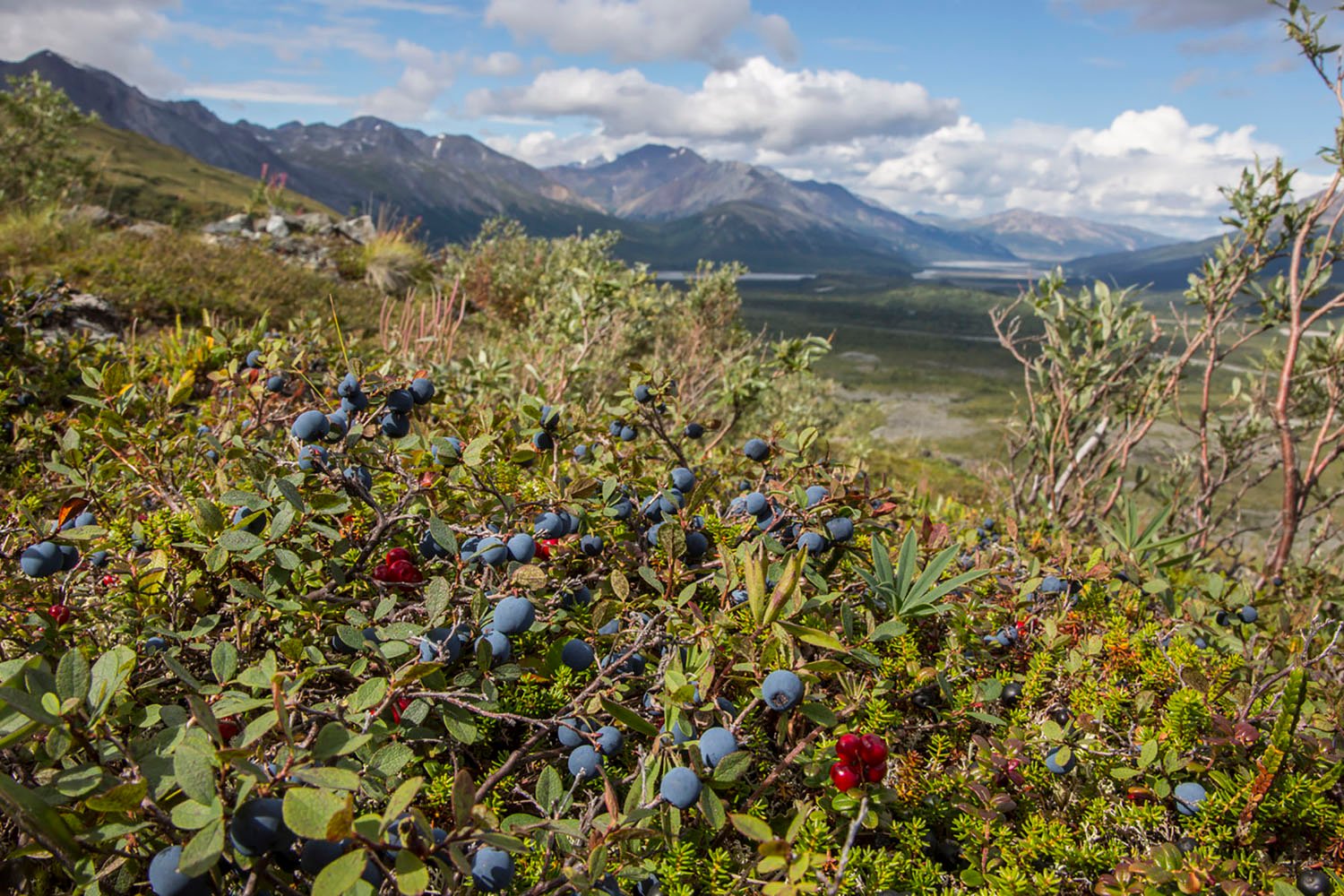 You’ll find berries everywhere in Alaska. There are over half a dozen varieties of blueberries alone, not to mention watermelon berries, salmonberries, Russian berries, lingonberries, and more—each with its own unique flavor that is worth seeking out (either in a restaurant or in the wild). We love a slice of gooseberry pie for dessert, especially after an exciting afternoon spent discovering Alaska’s natural beauty.

If you decide to forage for berries in the wild (perhaps as part of our A Taste Of Tlingit Cuisine shore excursion), it’s important to understand that, while most berries are delicious and harmless, some must be avoided. Specifically, all white berries—which can be poisonous—and the baneberry. The baneberry can be white or red with a black spot and is exceptionally bitter. If you think you’ve picked a potentially harmful berry, your best bet is to play it safe and ask an expert. 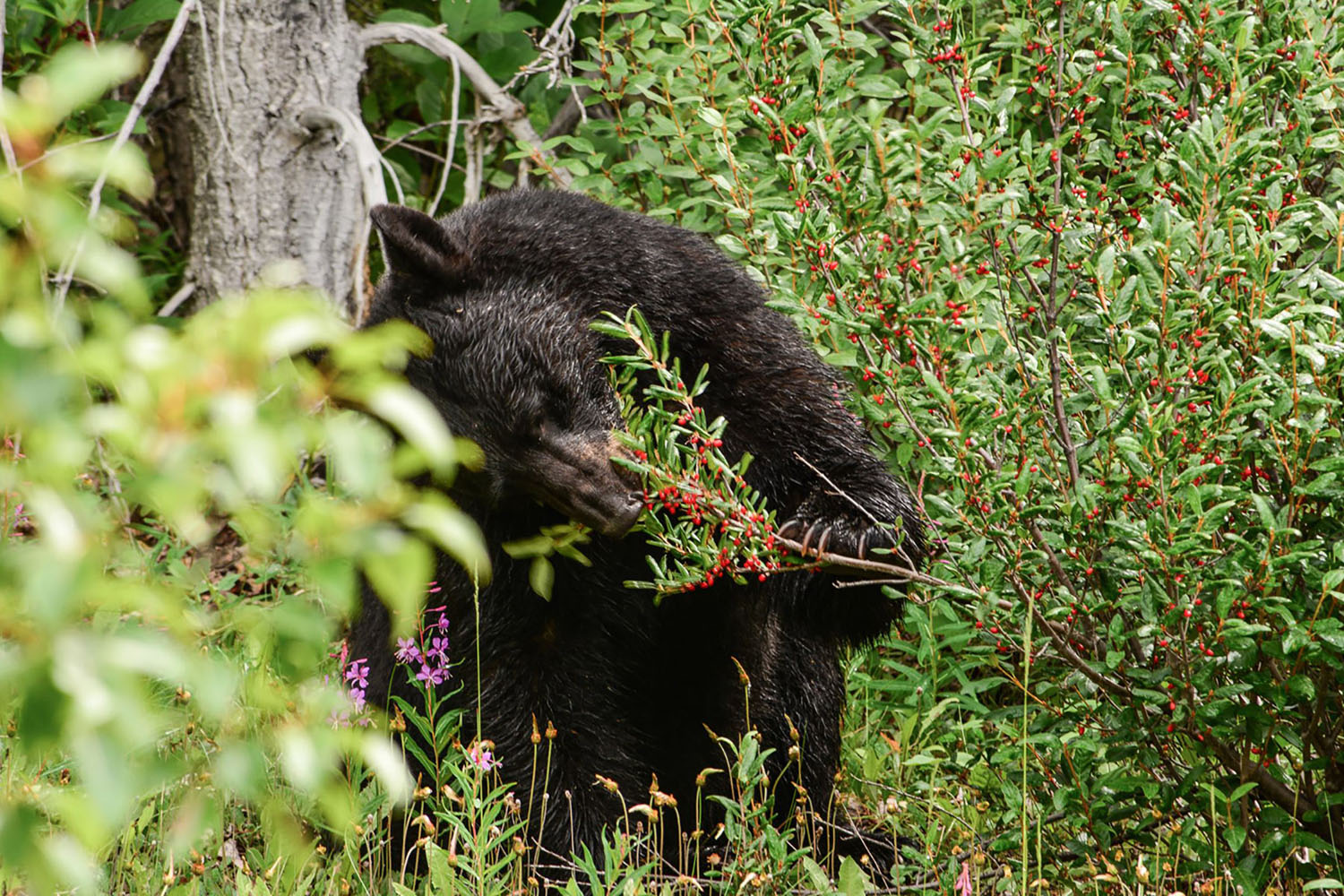 You’ll also want to keep your eyes peeled for other locals when you’re out picking berries. No, we’re not talking about sourdoughs (a common term of endearment describing folks who have lived in Alaska a long time)—we’re talking about bears. Bears love berries as much as we do, which is why Alaska.org suggests making calm noises such as conversations with fellow hikers, or even lighthearted singing when you’re out on the berry hunt. That way, any bears in the area will be alert to your presence and can easily avoid you. 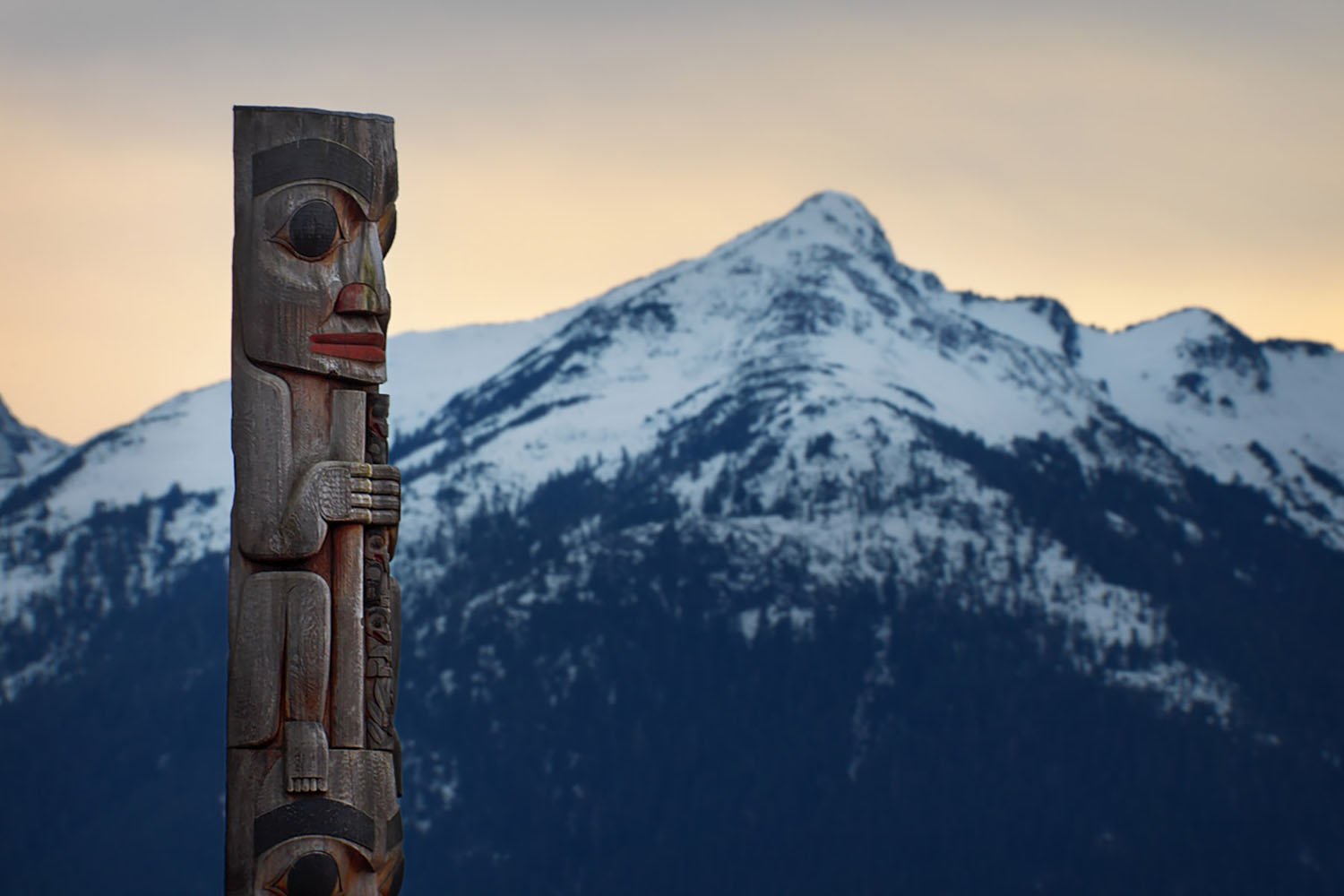 Most of the foods we’ve mentioned here, while exciting, might not be considered truly out of the ordinary for the established foodie. If you’re looking for a real culinary adventure (or challenge, depending on your palate), you’ll want to try a few of the more famous dishes passed down from generation to generation by Alaska’s Yup’ik people.

This traditional dish of the north consists of the skin and blubber of whales. Customarily, bowhead whales are used when preparing mangtak, though it's not uncommon to see the dish prepared with the blubber and skin of a beluga or narwhal. The skin and blubber are frozen and then eaten raw with a light sprinkling of salt. While this dish may seem unconventional to most, it’s been considered a Yup’ik staple for generations, and a vital source of Vitamin C and D for some of North America’s northernmost inhabitants. 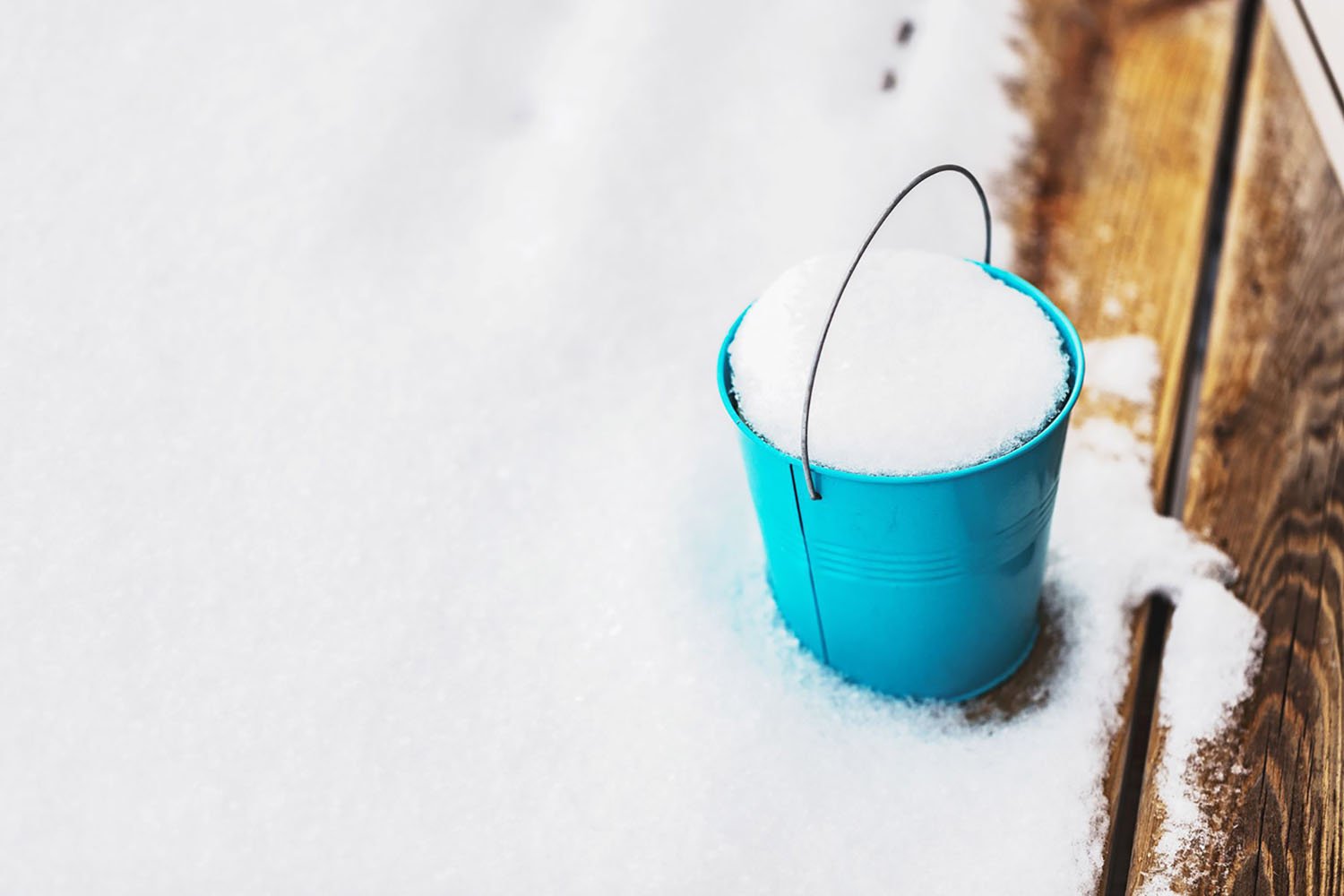 If you’re hungry for dessert after you dine on mangtak, consider a serving of a bowl of akutaq. Also known as Alaskan ice cream, akutaq isn’t quite like the ice cream you’re used to getting in a love grocery store. This is a combination of reindeer fat, seal oil, wild berries, and snow, all whipped together to create a tasty treat with a consistency that is often described as foamy. Because akutaq has always been dependent on the availability of local ingredients, recipes vary from place to place. Depending on where you sample this Alaskan staple, yours may include tallow from caribou, walrus, or moose, as well as a wide assortment of berries.

Work Up Your Appetite With Us 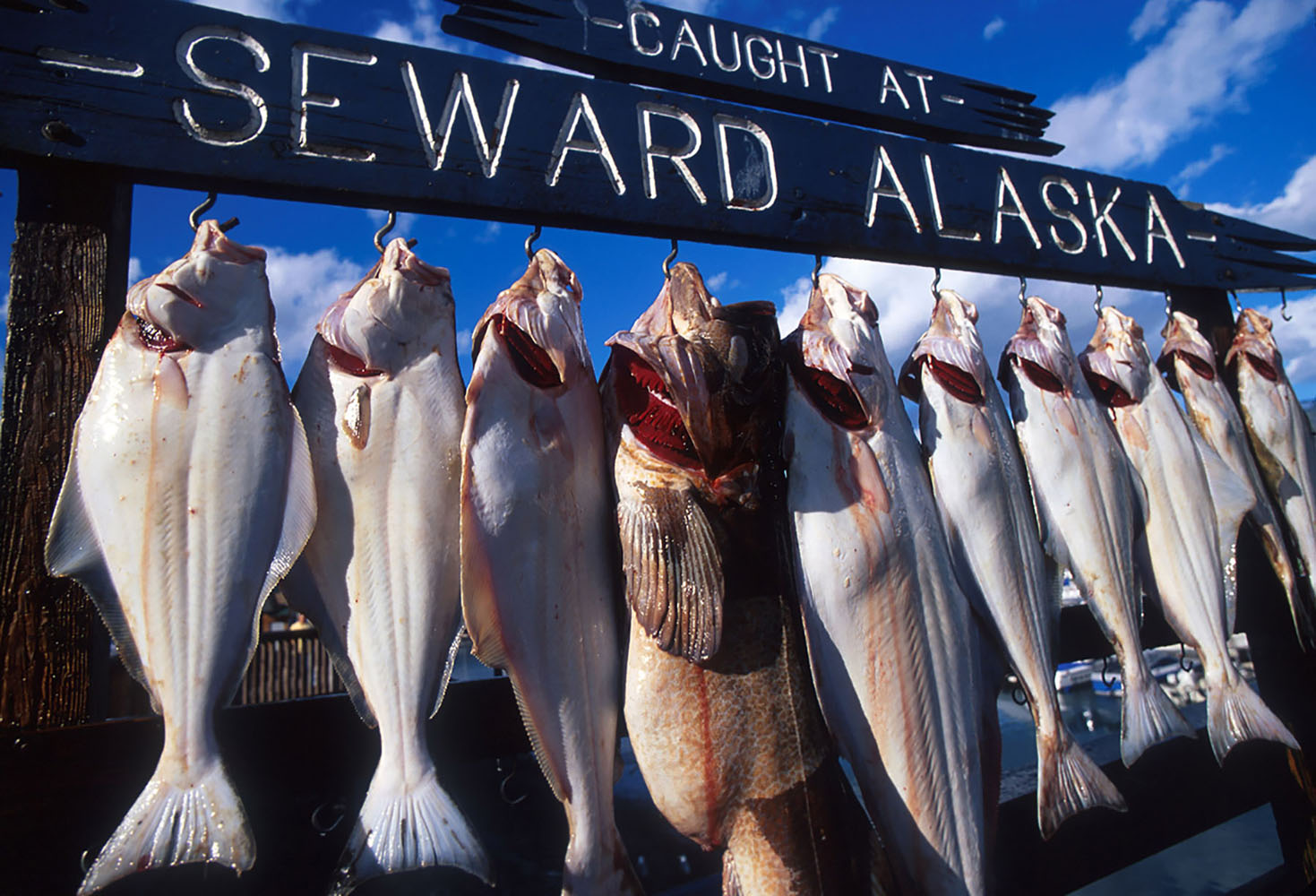 Are you getting hungry for more? When you join us in Alaska, you’ll have plenty of opportunities to experience local cuisine for yourself. You can step foot inside Alaska’s wildest kitchen, enjoy a sightseeing cruise that ends with a crab feast, or take part in a salmon bake in an Alaskan rainforest—and these are only the appetizers!

Start by browsing out upcoming Alaskan voyages, then prepare yourself for the main course that will serve as a visual feast for all your senses—an unforgettable journey through the Last Frontier.

Vast swaths of raw wilderness untouched by man, picturesque mountains capped in snow, rugged coastlines alive with the roar of the oceans and the songs of...

Check just about any avid traveler’s bucket list, and you’ll find sunny Australia near the top. A country that’s also an entire continent, this proud...

The Ultimate Guide to French Food and Wine: Part Four

Welcome to the fourth installment of our series on French food and wine! Catch up by reading parts one, two, and three. How can you enjoy French food and...