The Best of Bermuda

When it comes to island destinations, what springs to mind? For many, it’s the sandy shores of beautiful, balmy Bermuda. The beaches are the picture of paradise, and one could easily spend a lifetime with their toes in the sand and a drink in their hand. But move beyond the pink sand and turquoise waters, and you’ll discover an island nation that packs an entire world’s worth of cultural influence into 20 miles tip to tip.

Diverse and distinct, Bermuda has something for everyone, from the sun worshippers and history buffs to the culinary critics and the outdoor adventurers — and we’re excited to share it with you.

Here are our picks for the best of Bermuda.

Perhaps no other attraction on Earth is as aptly named as Bermuda’s Crystal Cave. Why? Because as soon as you step foot inside, you’ll realize this intimate, yet intricate space is a real gem.

Discovered over 100 years ago by Carl Gibbons and Edgar Hollis, Crystal Cave was uncovered by sheer luck. These two were not thrill-seeking explorers, and the only thing they were out to discover was the location of their lost cricket ball. While the ball’s location may remain a mystery, the cave has become well known as a must-see subterranean sanctuary. Inside, you’ll find stunning stalactites and stalagmites (icicle-shaped formations that hang from the ceiling or rise from the floor, respectively), as well as a crystal-clear lake you can cross on a platoon-style walkway. The cave is illuminated by a sophisticated lighting system that ensures a clear view without interrupting the natural order of things. 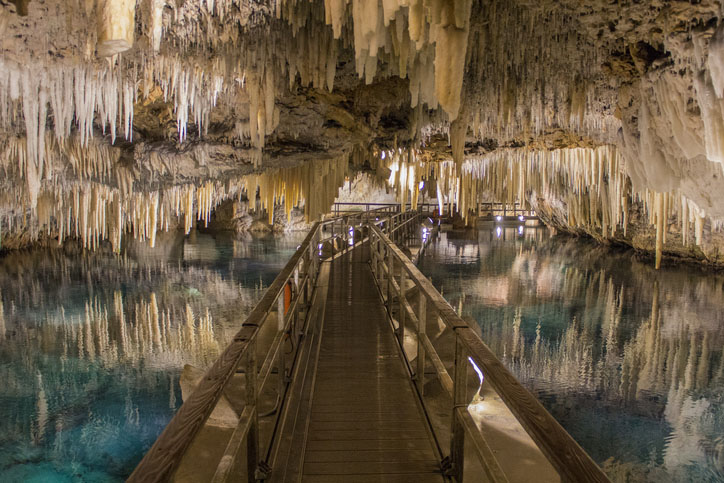 Look closely into the water below, and you’ll find a collection of cell phones that have become a bit of a humorous attraction for cave visitors over the years. It seems some explorers are so excited to snap that perfect photo, they forget to keep a firm grip on their phones. While pictures are encouraged, so is climbing out of the cave with all the accessories you had climbing in.

One final interesting fact about Crystal Cave (which, admittedly, might be more interesting for your children or grandchildren) — it directly inspired the setting of the show, Fraggle Rock. One look at the interior of the cave, and that connection becomes clear. It should also come as no surprise that the co-creator of the show, Michael Firth, was born in Bermuda’s capital city of Hamilton.

And speaking of Hamilton... 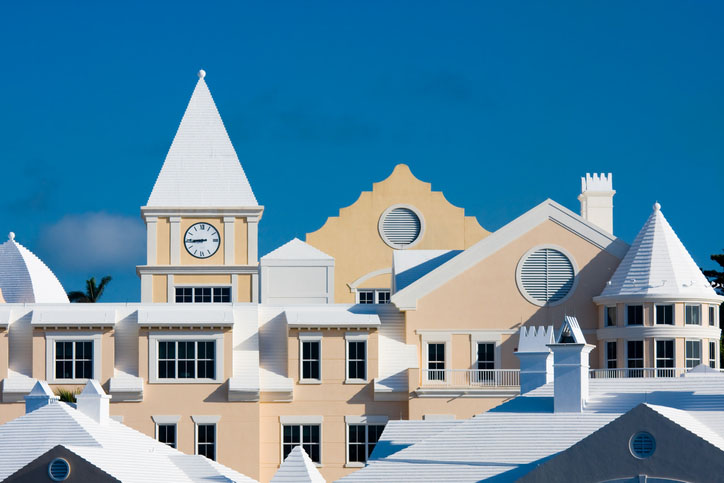 Hamilton is one of the smallest capital cities in the world — only about 1,000 people call the city home. But what it lacks in population and size, it makes up for with beauty and character. One of the most interesting attractions here is Fort Hamilton. 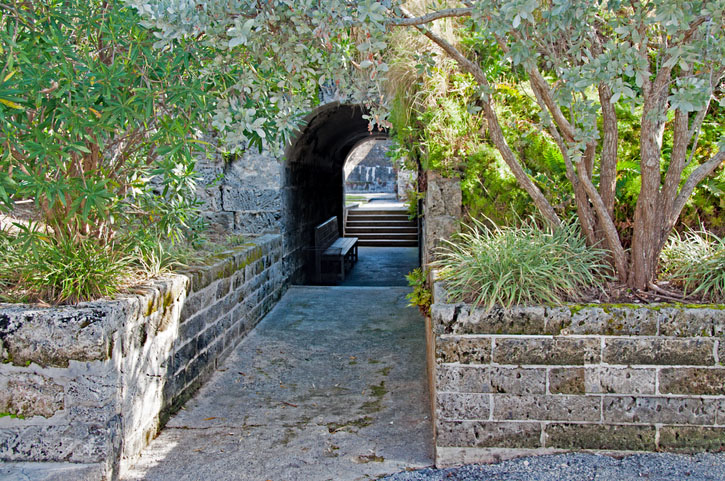 Located on a nearby hilltop, this well-preserved fort was built in the 1870s and formerly served as a means of protecting the harbor from enemy ships. Today, it’s more noted for its spectacular views than its military might. In fact, the cannons that stand guard atop its walls were never fired to defend against an enemy attack. While you’re here, stroll along the trail through the fort’s 30-foot wide moat, which has since been converted into a serene tropical garden — complete with varieties of bamboo, fern, and creeping plants.

Learn About Life Under the Sea 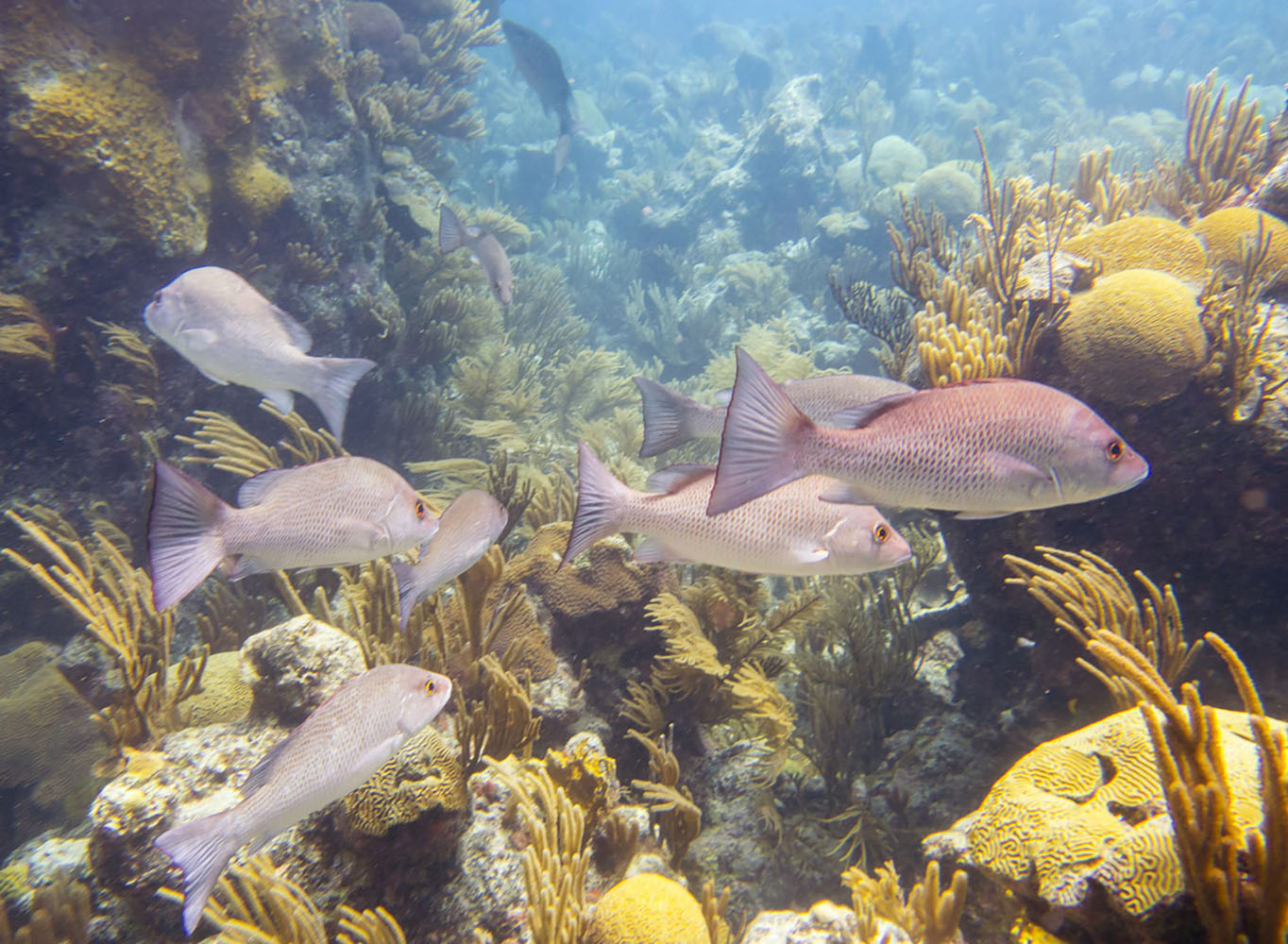 Hamilton is also home to the Bermuda Underwater Exploration Institute — a state-of-the-art facility focused on education, awareness, and uncovering the mysteries of the deep. Here, you’ll learn about the famed and feared Bermuda Triangle, experience what it feels like to dive 12,000 feet in the diving capsule simulator, and discover the history of diving apparatuses all the way back to the 17th-century. You can even participate in a virtual yacht race (but if you still prefer life aboard your boutique hotel at sea, we can’t say we blame you).

Lose Yourself in the National Museum 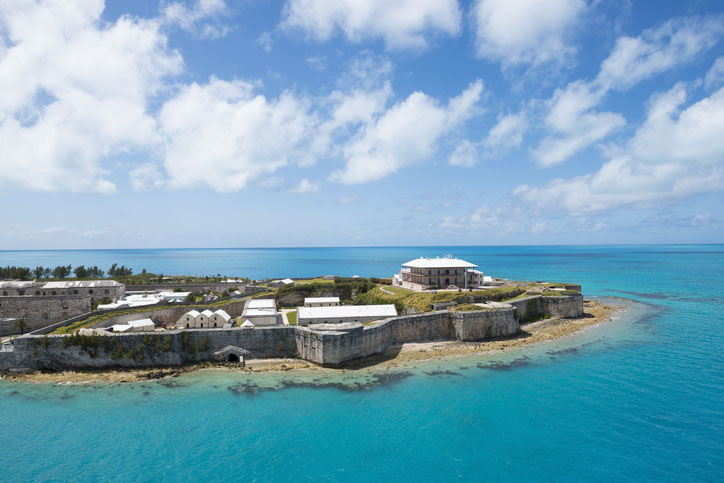 A crown jewel for history buffs, the National Museum of Bermuda brings the island nation’s vibrant past to life before your very eyes. In the Queen’s Exhibition Hall, you’ll find a wide assortment of treasures salvaged from the remains of 18 ships wrecked in Bermuda’s waters between the 16th and 18th centuries. Pottery, trade goods, and armaments are all on display here — pulled from ships that carried many of Bermuda’s original colonists. The hall also features videos highlighting the incredible work being done by underwater archeologists as they navigate and explore the world under the sea.

Beyond the Queen’s Exhibition Hall, make your way to the Commissioner’s House — renowned as the world’s first cast-iron building. Here, browse displays dedicated to Bermuda’s history. Highlights include exhibits exploring the cultural influence brought to the island by West Indian immigrants, Bermuda’s participation in WWII, and the island’s first Portuguese settlers. The house is home to an unmissable (literally) floor-to-ceiling mural depicting Bermuda’s fascinating history. Take some time to pour over this work — which took Bermudian artist Graham Foster three years to complete — and new details will continuously reveal themselves to you.

Rumble in the Jungle 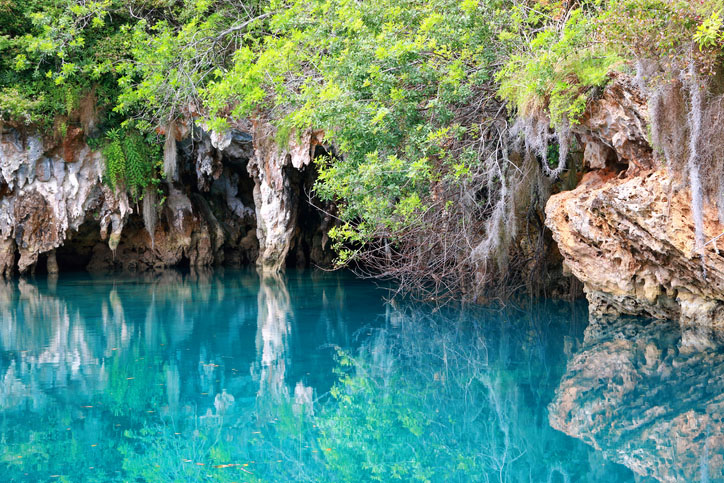 It may surprise you to learn that Bermuda is home to a jungle, but it’s true — and it’s yours to explore. Officially, it’s the Walsingham Nature Reserve, but most locals know it as “Tom Moore’s Jungle”. Now, you may ask yourself why a jungle in the middle of the Atlantic is named after a 19th-century Irish poet. The answer to this question is really quite simple. During his brief time in Bermuda, Moore captivated locals and found the area inspiring for his writing. Of course, it’s easy to understand why — this is a beautiful part of the world with lush greenery that may rival the Emerald Isle Moore so loved. It’s also home to exotic birds, mysterious caves, and beautiful blue swimming holes.

These natural swimming holes are the perfect spot to dive in and cool down when you’re out on a hike. They’re also the kind of place you can relax and watch brave locals make their way up cliff sides to leap into the deep waters below. Feeling adventurous? Join them for a dip! Elsewhere in the jungle, with a little exploration, you’ll find pools of water hidden inside caves and caverns, making for remarkably memorable swimming experiences. 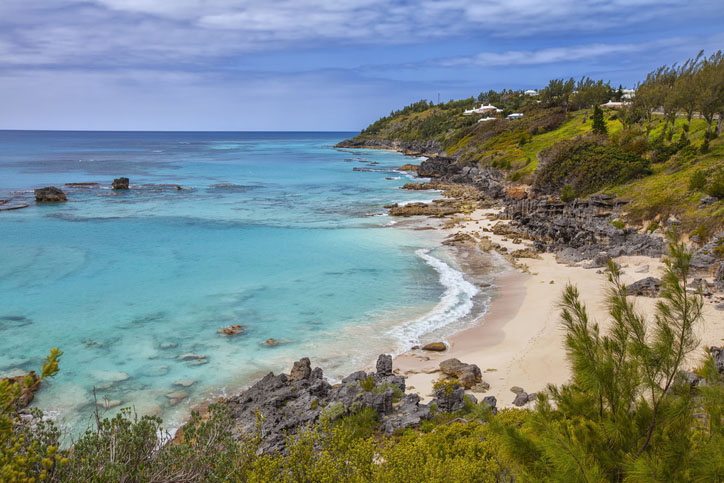 Turquoise, yet clear, Bermuda’s beautiful waters are the perfect place to spend a day snorkeling. And for us, there’s no better snorkel spot than Church Bay. When you arrive, you’ll find spectacular views of the bay from the park on the hill (which is also a lovely spot for a picnic). Make your way down the staircase, and you’ll find yourself in the sheltered waters of the bay.

Thanks to the boiler reefs located just offshore, Church Bay functions like a natural aquarium — housing marine life and plenty of colorful tropical fish. While here, be sure to keep your eyes peeled for angelfish, butterflyfish, and parrotfish (which look exactly as you imagine them). 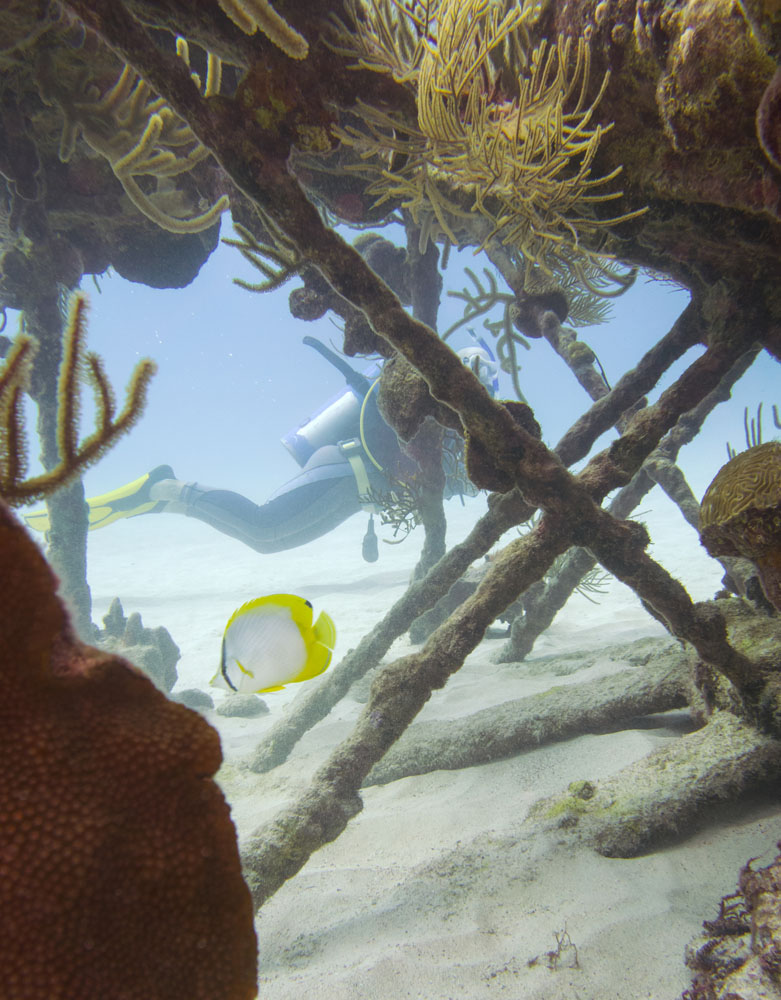 If you’d rather get even deeper underwater, Bermuda is also home to more than 300 thrilling dive sites. Our personal favorite spot is North Rock. This is where you’ll find Bermuda’s largest coral reef, as well as its most diverse assortment of sea life. That said, North Rock is about 12 miles from shore, so if you’re not interested in an all-day diving trip, here are a few other hot spots to consider:

The Two Tugs: This site comprises two boats: King, which was intentionally sunk in 1984 to become Bermuda’s first artificial reef, and Forceful. While King attracts plenty of underwater life, Forceful feels a bit more like an adventure movie come to life. That’s because divers can make their way under its enormous propeller and find themselves in the ship's engine room — move over, James Bond!

Tarpon Hole: Visually impressive, the Tarpon Hole is a honeycombed reef known for attracting big fish. In particular, you’ll find tarpon here. These prehistoric fish are known for having eyes roughly the size of tennis balls. While you’re here, also be on the lookout for the diverse variety of coral.

Cathedral: Overhangs, canyons, swim-throughs — Cathedral offers an array of delights for divers. The site gets its name from a swim-through that resembles a large room with a single beam of light shining through it. It’s truly a beautiful destination for divers to uncover. 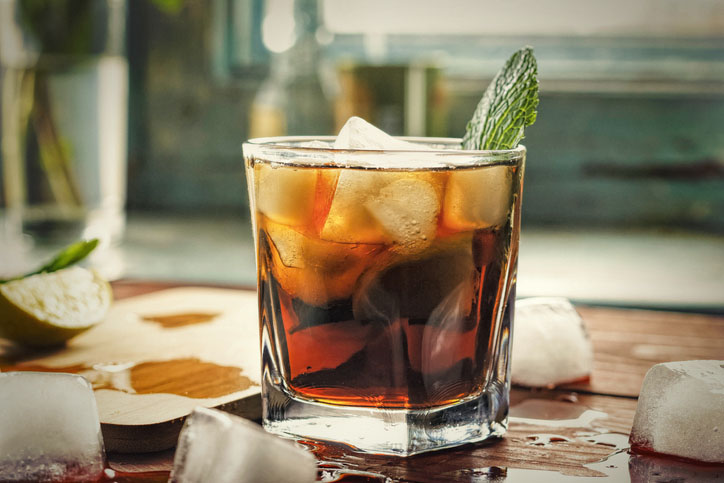 For more than 200 years, the Gosling Family has been blending their distinctive black rum in Bermuda — making Gosling’s Rum the oldest business on the island. It’s no wonder their Black Seal Rum is practically synonymous with Bermuda. Because it plays such an important role in the country’s history, we think it’s only right that you sample Gosling’s flavorful spirits for yourself.

Not sure which drink to try? We can help! Our recommendation is a Gosling’s Dark n’ Stormy, which, coincidentally, is Bermuda’s national drink. Imagine sitting oceanside with a drink in your hand as the sun sets and the sky explodes into a sea of colors. We’ll definitely drink to that. 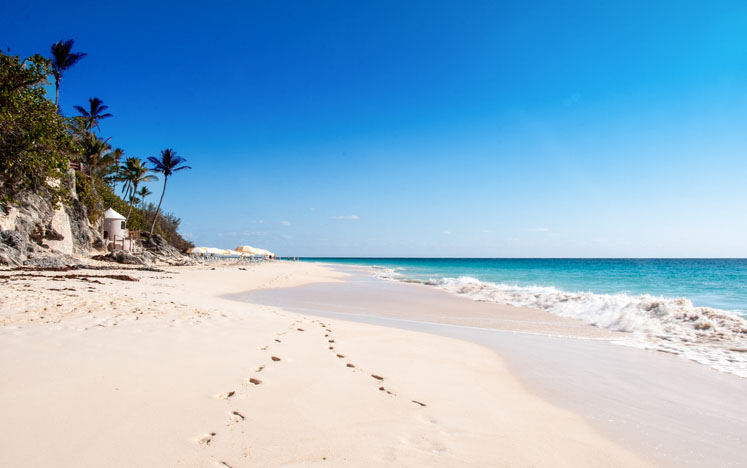 Mark Twain once said, “You can go to Heaven if you like. I’ll stay right here in Bermuda.” If you ask us, he was on to something. Start planning your cruise today and lose yourself in this sunny island paradise.

Browse our upcoming sailings to Bermuda.

A Quick Guide to Cruising to Bermuda

Did you know that Bermuda is not technically part of the Caribbean? The tropical oasis boasts the stunning beaches and warm climate we associate with...

Rhodes, Greece is a UNESCO World Heritage Site and popular tourist destination located twelve miles off the coast of Turkey. Besides going to the...