Greece, a land of ancient wonder, mythology, and serene islands. The thing that brings it all together? Food. Specifically, olives and olive oil. There’s no better way to experience a culture than through food, and Greece is an excellent example. The olive tree, its branches, its fruit, and the oil derived from its fruit all play a part in making this inconspicuous flora a vital part of Greece. In fact, the Mediterranean diet from this region, which includes olives and olive oil, is so essential to the planet that it’s recognized by UNESCO for its intangible cultural heritage. The etymology for the English word oil shows it actually comes from Ancient Greek and Latin words for olive tree and olive oil.

Today, we’re here to satisfy your appetite for knowledge with the story behind olives and olive oil in Greece. So get ready, here comes the appetizer! 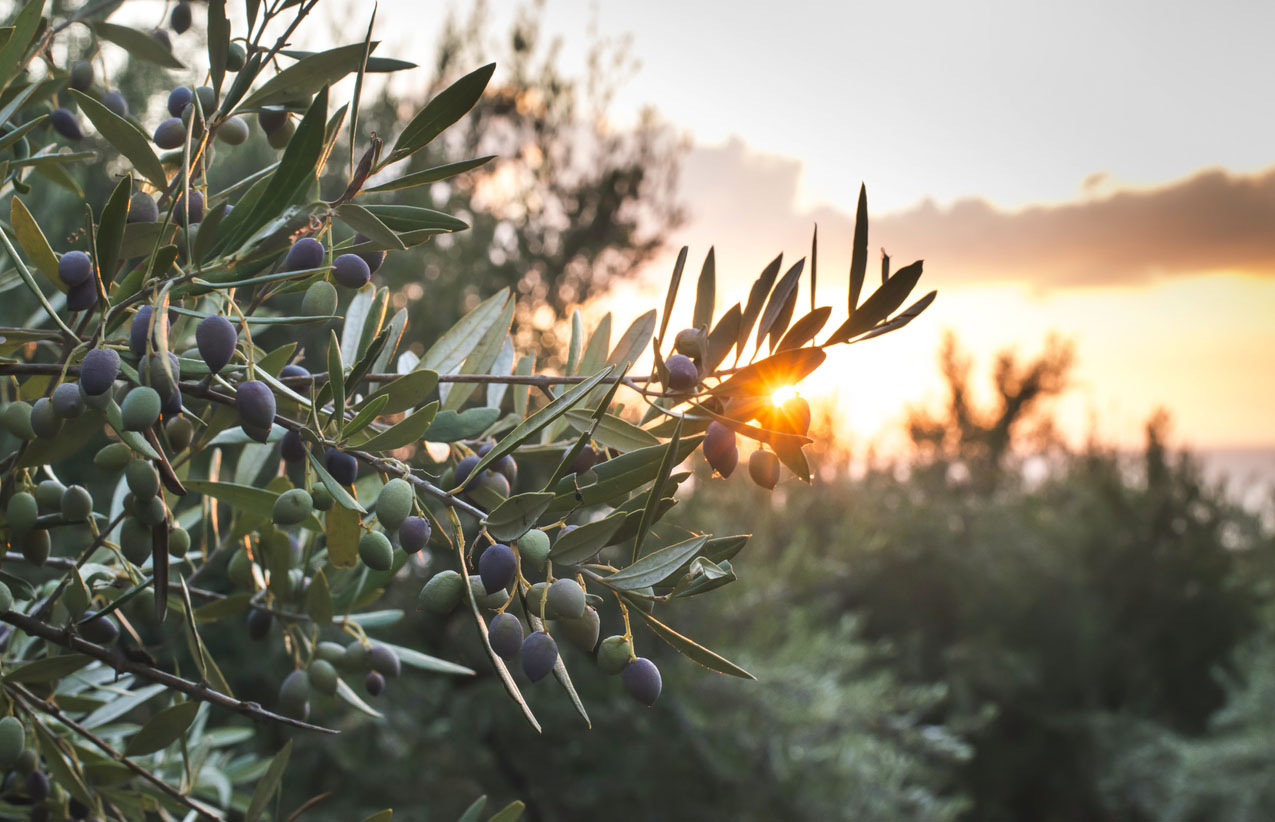 Olives have been at home across Greece for a long time, with fossils of olives trees found on the island of Evia dating back to 23 million years ago. The tree itself was first domesticated in the eastern Mediterranean around 6,000 years ago, back in the Neolithic period.

The earliest known use of olive oil comes from the Mycenaean Greek period of around 1,600 to 1,000 BC. Clay tablets found at archaeological sites show olive oil was quite versatile — it was used for everything from perfume to religious purposes. It was also important to the Minoans on Crete during the Late Bronze Age. This powerful ancient civilization cultivated olive trees to produce olive oil and use it as a trade commodity, bringing in even more power and wealth. It was a cornerstone of the Minoan diet and used for cleansing, medicine, massages, and more.

The olive tree didn’t compete in the ancient Olympic Games, but it did make the podium every time. Athletes would perform while slathered in olive oil, and winners would be given a crown made of olive tree branches. You can tour the site of these games, held initially between 776 BC and 393 AD, with an excursion to the Olympic Stadium in Olympia when you visit the colorful port of Katakolon.

As with everything in Greece, the olive tree has its roots in Greek Mythology. At the Acropolis in Athens, you’ll find a sacred olive tree that has survived — or at least its branches have been saved and replanted — for over 2,500 years. It was first planted by Athena, the Olympian goddess of wisdom and war, during the founding of Athens. A contest was held between Athena and Poseidon, the Olympian god of the sea, as the two tried to gain control of the city. Zeus, the god of the sky, oversaw the contest, and the people of the city would declare the winner. Poseidon used his trident to create an underground sea with a saltwater spring. However, since Athens is already near freshwater, the saltwater spring was not very useful for the people judging this duel. For Athena’s turn, she planted an olive tree that produced fruit. Along with wood, it grew olives that could be used for creating olive oil. The people saw this as a far more valuable gift, and Athena was declared the winner, with the city taking her name.

The Pitted Superstars of Greece

Olives are a drupe, a type of fruit with a single large stone with a seed inside, similar to peaches, dates, and cherries. A compound called oleuropein makes them incredibly bitter to eat raw, so most olives are cured to cut down on the unpleasant flavors while magnifying the good ones. 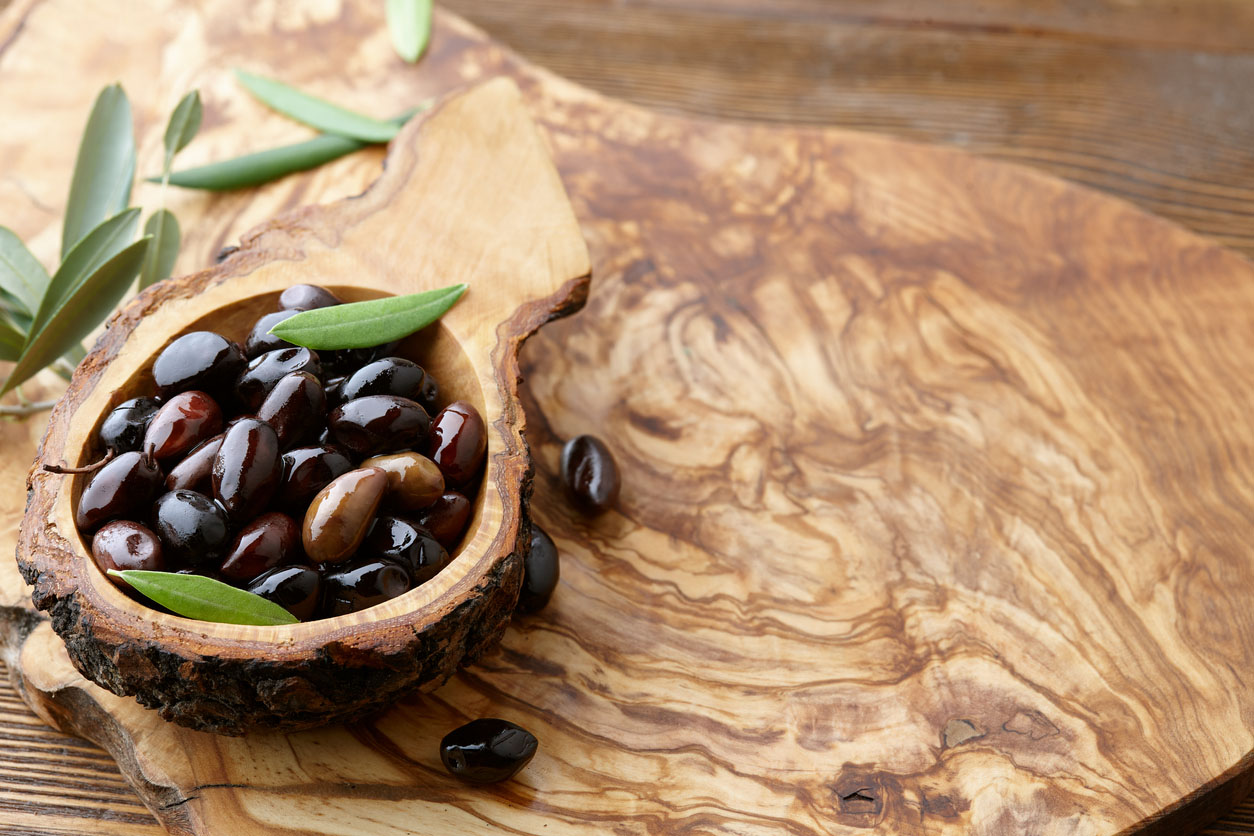 When it comes to Greek olives, Kalamata are the first that come to mind. They’re grown in the valley of Messina and get their name from the nearby town of Kalamata. You can recognize these olives from their dark black or purple color, almond shape, and shiny skin — a star ingredient of any Greek salad.

When you’re in Greece, keep an eye out for Nafplio olives, a green olive grown in the valley of Argos. While you may be able to import these Greek olives to other places globally, they’re primarily enjoyed in Greece. Typically brined, these small and crunchy treats are best served as table olives.

If you come across a wrinkled black olive, chances are it’s a throubes. These sundried olives mostly come from the island of Thassos, and their claim to fame is they’re the only olive you can eat right off the tree.

Cretan green olives from the island of Crete are sometimes enjoyed as table olives, but, more importantly, they’re full of oil. Also known as koroneiki, these small olives are responsible for some of the best olive oil in the world. 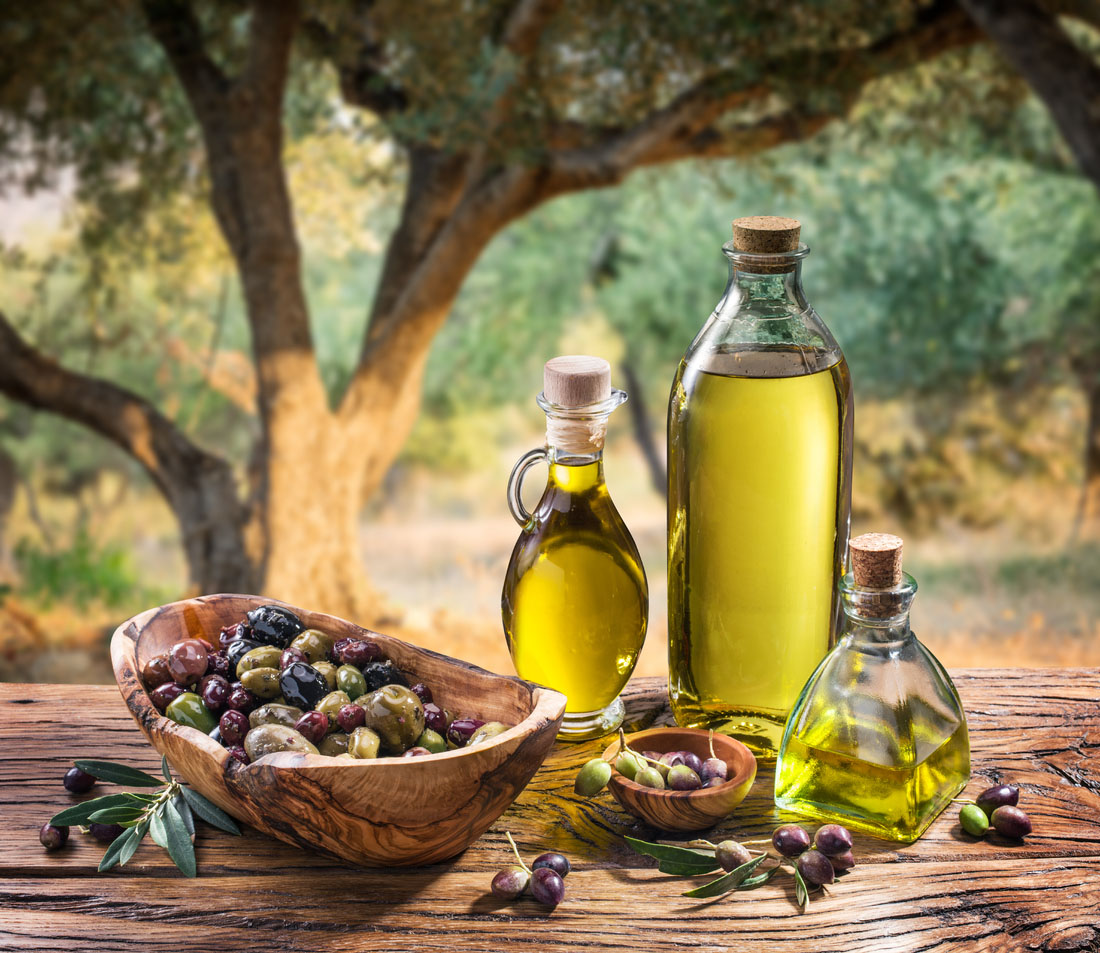 Now that we’ve covered some of the different types of olives you’ll find in Greece, let’s talk about the oil they produce. While olive oil is made in a handful of countries, Greek olive oil tends to be green and has a strong aroma and flavor. Approximately 13 percent of the world’s olive oil comes from here. Olive oil is made from harvesting olives, then crushing them. After this, they are slowly churned or mixed through a process called malaxation. The final step is the extraction of the oil before bottling it. You can learn more about this process while in Kalamata with a visit to Benakopoulos Olive Mill. Here, you’ll discover how olives are grown, harvested, and pressed. Most importantly, you’ll enjoy a tasting as well!

Ways to Cook With Olives and Olive Oil 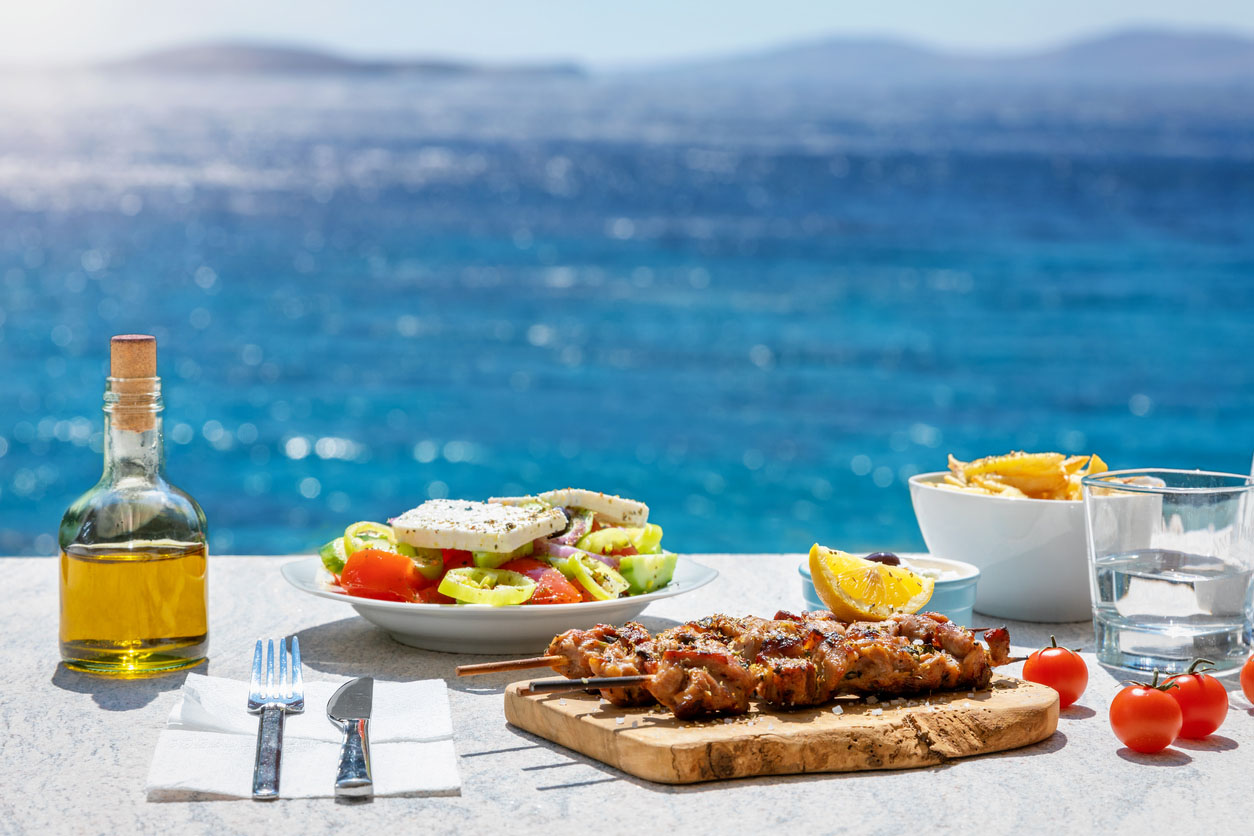 While ancient Olympians may have slathered their bodies with oil, chances are you’re more interested in using it with food. And luckily, it’s a versatile addition to any meal. When it comes to appetizers, a Greek salad just isn’t a Greek salad without Kalamata olives. Olive oil can also be used in pan-frying to add extra flavor, but avoid using it if you don’t want to overpower your meal.

Souvlaki is one of the more popular street foods across Greece. These meaty skewers are packed with flavor thanks to a marinade that typically stars extra virgin olive oil. And for a filling meal, olive oil is a crucial ingredient in Greek lentil soup, also known as fakes.

It’s also okay to let the olive oil steal the show, enjoying it on its own and paired with bread for dipping. Not only is it delicious, but extra virgin olive oil is full of healthy fatty acids and antioxidants that have several health benefits, including reducing the risk of heart diseases. It’s a big part of the Mediterranean diet that’s been enjoyed by some of the world’s healthiest people for a long time.

Azamara offers you the chance to eat like a local with exceptional food tours, such as the culinary walk through Mykonos. As you stroll this legendary island with a local expert, you’ll gain insider knowledge about Greek food while also sampling meals that are renowned around the world.

Get Ready for a Greek Getaway 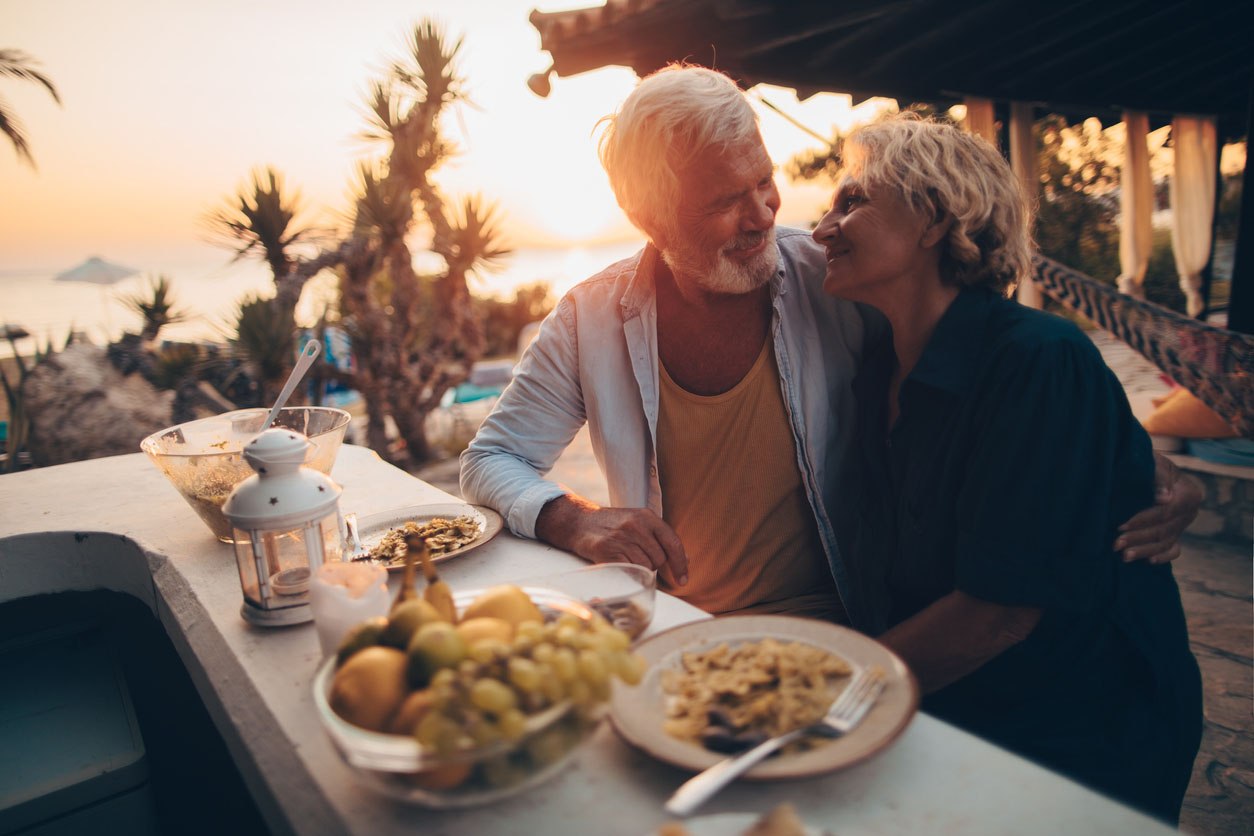 Have an appetite for exploring and tasting all the delicious flavors this part of the world has to offer? Good news, we’re returning to Greece soon, and we want you to join us!

Learn more about our exciting journeys through Greece and plan your next getaway. Don’t forget to pack your appetite. Opa!