Picturesque and pristine, Norway is, hands down, one of the most beautiful countries in the world. Famous for staggering fjords and majestic waterfalls, the rugged coastline of this adventurer’s paradise is dotted with charming hamlets, each a gateway to a new adventure. This is the kind of country you can spend weeks exploring, which is why we visit on unique country-intensive voyages. When you travel to Norway with us, you’ll have the time you need to take in its distinct atmosphere and culture. Become absorbed in the country’s diverse wildlife, sample cuisine that is an effortless blend of innovation and tradition, hike some of the most breathtaking trails in the world, or lose yourself in the cosmopolitan culture of Norway’s charming cities. Of course, some Norwegian experiences simply shouldn’t be missed, and here are seven of our favorites. 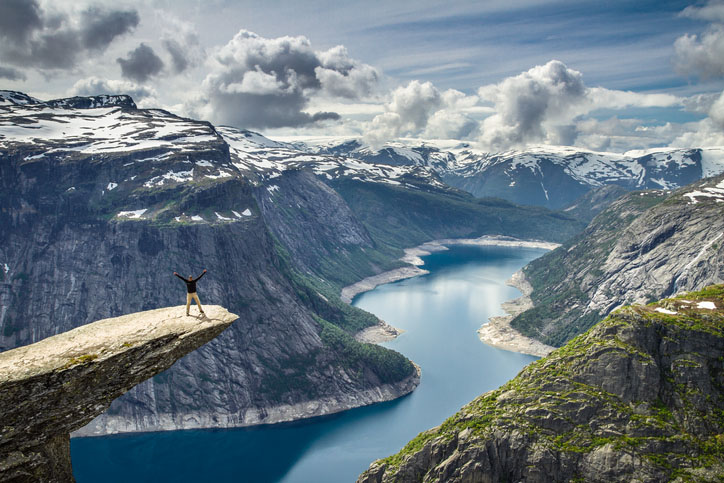 Practice saying this word: friluftsliv. (It’s pronounced free-looft-sleeve.) Friluftsliv translates to “free air life” and refers to the deep-rooted Norwegian philosophy of appreciating nature. Think of it as the opposite of the Danish word hygge (the art of living cozily that is currently a subject of fascination, and many a book, in North America).

Spending time in the great outdoors is an integral part of Norwegian culture and an aspect of life that is often attributed to the nation’s collective happiness (Norway is currently ranked as the third happiest country on Earth). If you want to experience some of this happiness for yourself, as well as discover Norway like a local, we recommend you get outside and embrace friluftsliv.

Of course, that’s easy to do when you cruise Norway with us. If you’re a dog lover and an avid hiker, our Walk With Huskies shore excursion offers a chance to join the pack and explore the wilds of Norway with a specially-trained group of curious, intelligent, and friendly huskies. If you’d rather explore on two wheels instead of two feet, our Sky to Fjord bike tour takes you 3,379 feet above sea level to the Djupvasshytta 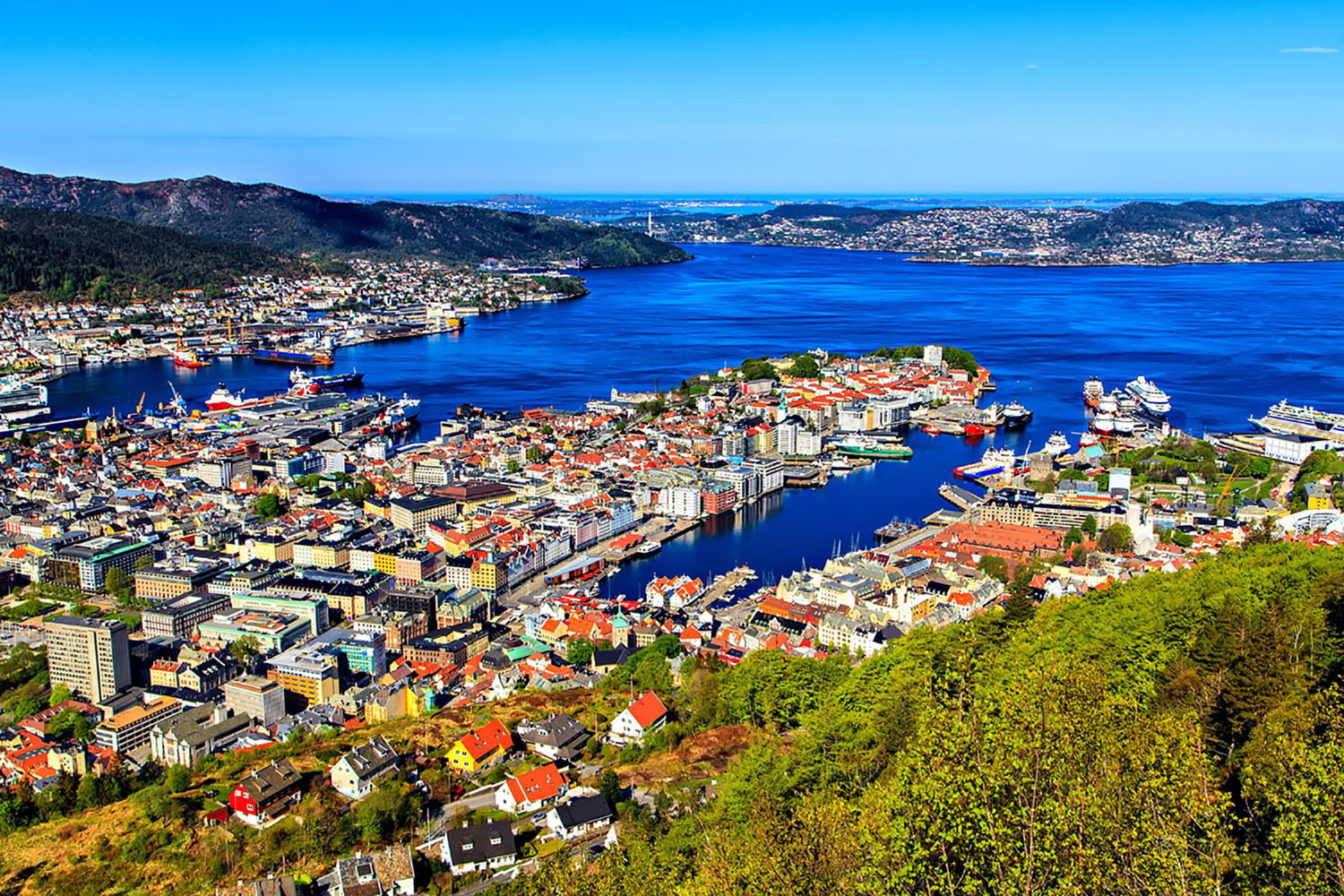 In Bergen, take the funicular to the top of Mount Fløyen.

Of course, hiking and biking aren’t the only ways to partake in friluftsliv. You can also enjoy the “free air life” by taking to the water. No trip to Norway is complete without exploring the country’s pristine lakes and astounding fjords. Simply cruising aboard the Azamara Journey allows for one unforgettable experience: traveling through Trollfjord, famed for its narrow entrance and steep cliffs.

Want a different perspective on the Geirangerfjord that is sure to be a thrill? Take a fast-paced RIB boat tour across this UNESCO Heritage Site. Or, if you prefer a slower pace, you can kayak the sparkling waters instead, getting an up-close view of the famous Seven Sisters waterfalls.

In a country of dramatic landscapes, the Lofoten archipelago stands out among the most breathtaking. Bridges and tunnels connect four main islands—Austvågøy, Vestvågøy, Flakstadøy, and Moskenesøy—while smaller, jagged, mountainous islands and skerries emerge from the sea all around. A RIB boat tour is a perfect way to see the area’s unique scenery, traditional fishing villages, and local wildlife. 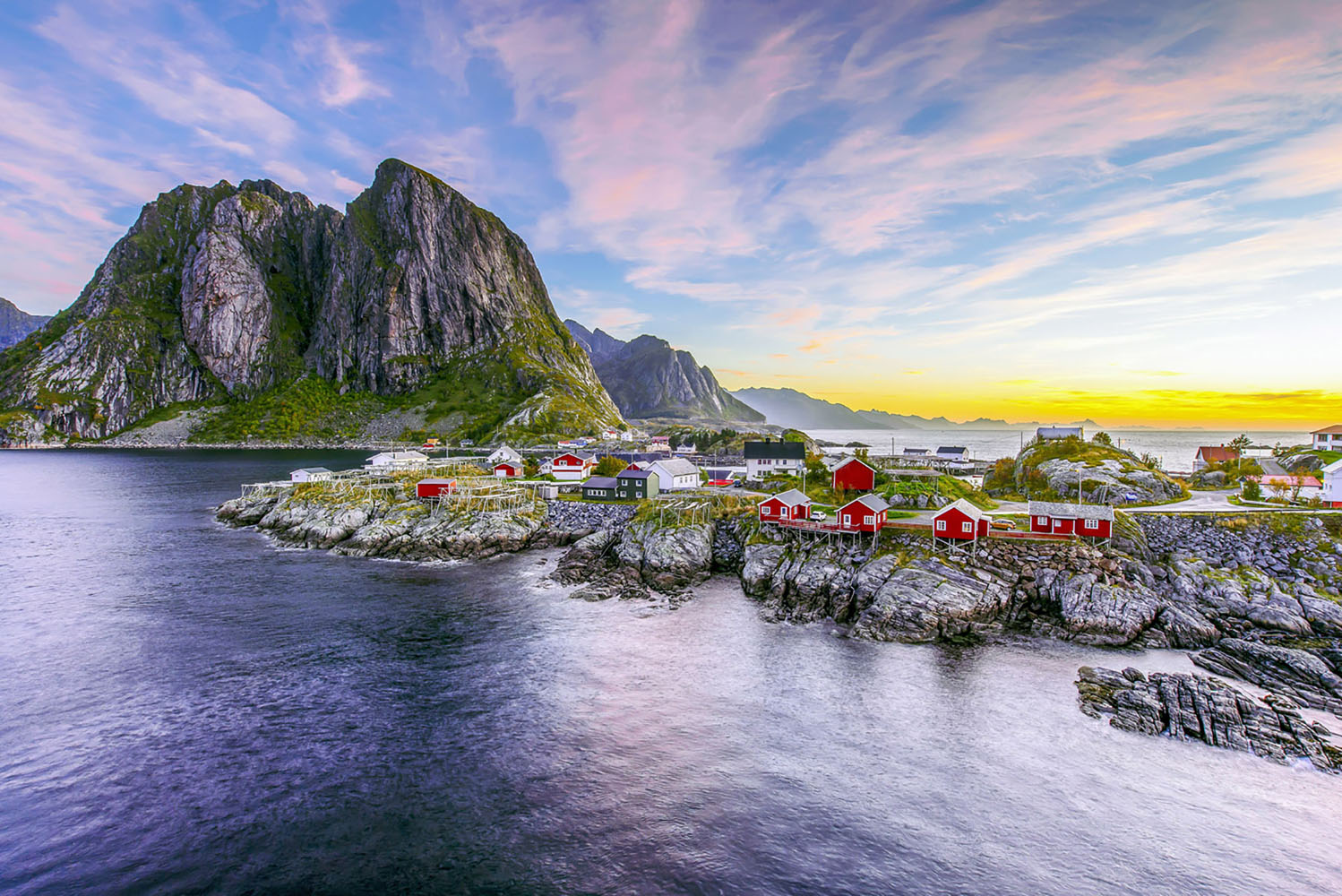 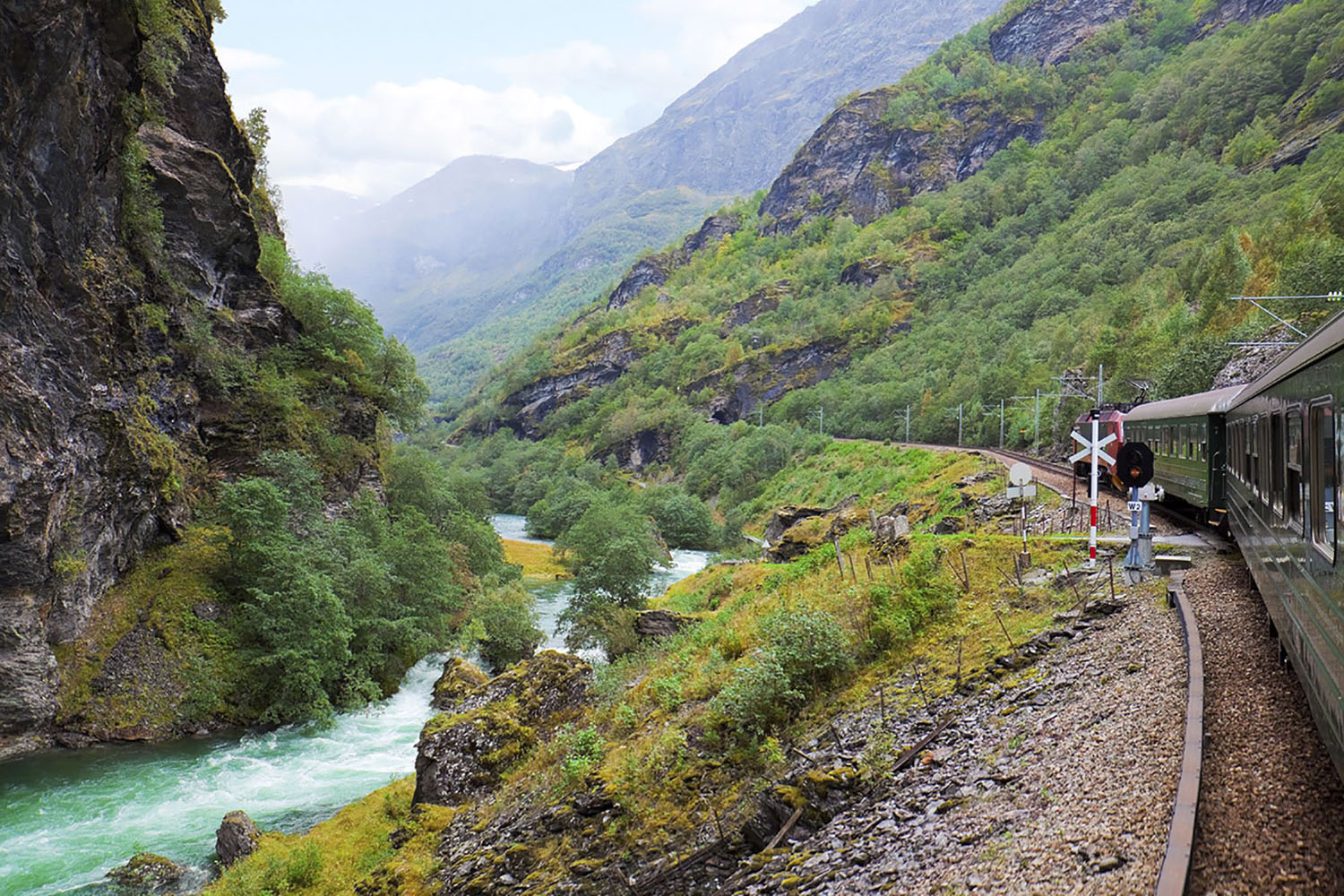 Flåm is a small town that packs a big punch. Sitting above Sognefjord, Norway’s largest and most famous fjord, the town is best known for the Flåm Railway—a 12.5-mile long route that climbs more than 2,800 feet from sea level. For peak sightseeing, when you ride the rails with us, the train moves at a slow pace and even stops at viewpoints along the way. The Flåm Railway is a quintessential Norwegian experience that shouldn’t be missed. And to top it all off, a stop at the Vatnahalsen Mountain Hotel mid-journey means you can dine on traditional Norwegian waffles with sour cream and jam. Yum! 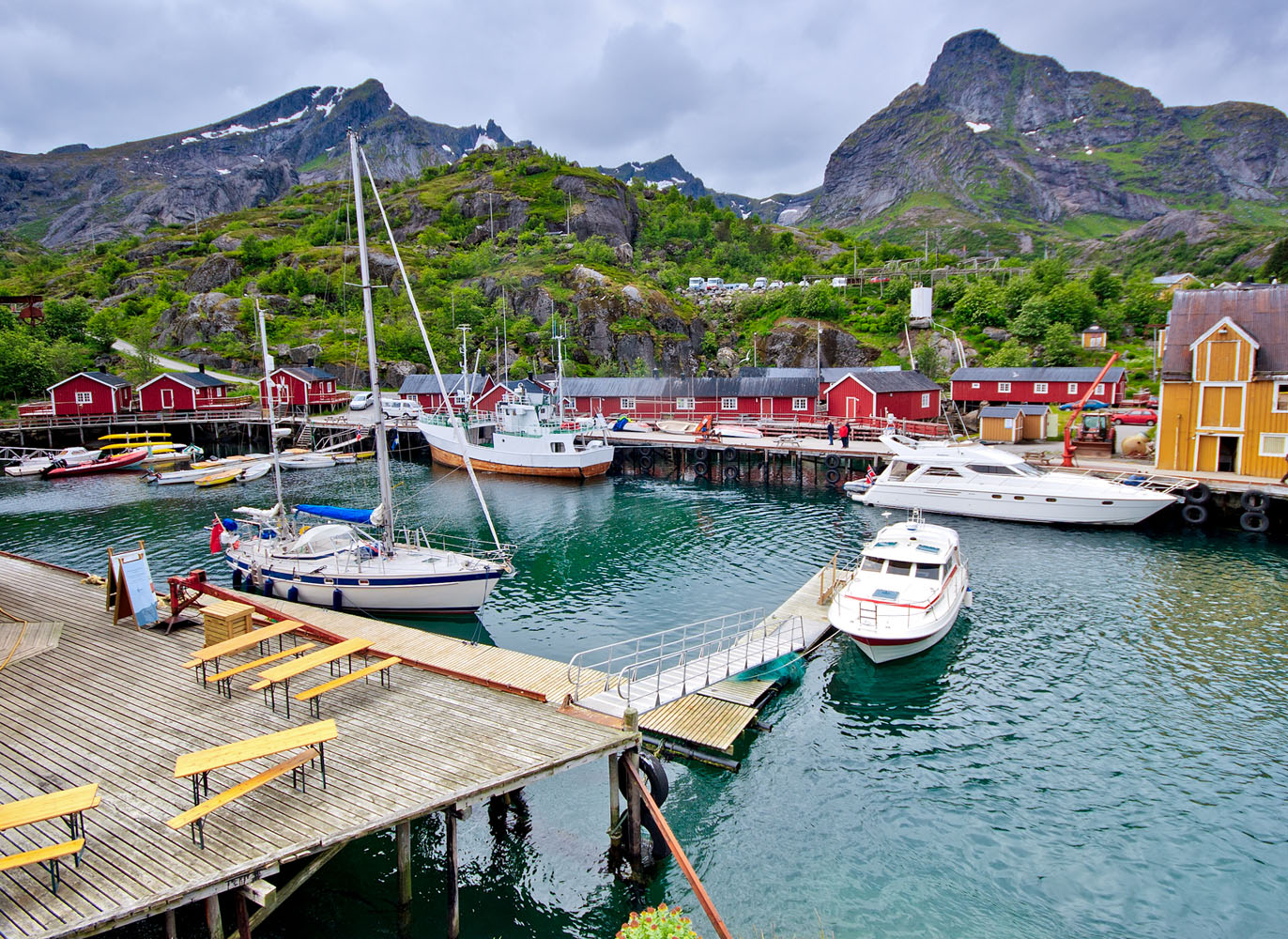 Speaking of food, don’t miss indulging in Norway’s traditional cuisine during your voyage. Fish and seafood aren’t just key parts of local food—they’re integral to local culture as well. As you cruise the fjords, you’ll notice tiny fishing villages along the coast. From Svolvaer, you can visit the UNESCO Heritage Site of Nusfjord. One of Norway’s oldest fishing villages, a visit to Nusfjord is like taking a trip through time for a fascinating inside look at how Norwegian life used to be. More interested in modern life? Join a local family in their home for a special tour followed by a round of delicious Norwegian waffles. There’s no better way to learn about local life than by talking to and dining with the locals themselves.

Norway is known for its seafood, so dining on the catch of the day during your visit is a must. Smoked salmon is a huge export and widely considered to be Norway’s most notable contribution to modern international cuisine. Trout, cod, herring, and sardines are also common. Shellfish, particularly king crab, is also popular. In fact, king crab is such a renowned meal that Norwegians will gather for krabbefests, or “crab feasts.” During these feats, which are typically held outdoors, live crabs will be cooked and immediately served with bread, mayonnaise, and lemon.

If you want in on the “feast”tivities, join us for a king crab fishing expedition in Sarnesfjord, or a crayfish trip in Nordfjord. Both local delicacies are served as rustic meals with fresh bread, mayonnaise, and lemon. Fishing tours are a great way to explore Norway’s beautiful fjords, learn about local fishing techniques, and partake in a delectable, authentic Norwegian meal. 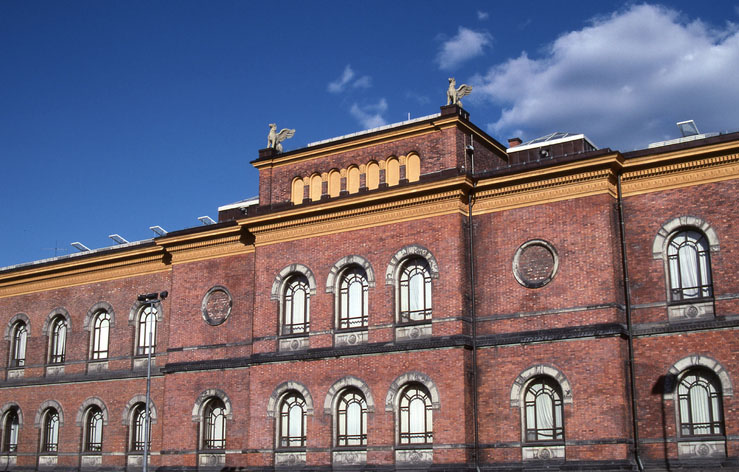 When it comes to Northern European cities, Oslo is something of a hidden gem. While Copenhagen and Stockholm have an ongoing rivalry for the most popular Scandinavian city, Oslo is quietly great. What makes Oslo so appealing? It’s a cultural hub. It’s home to striking architecture, a renowned Opera and Ballet, fantastic restaurants, beautiful parks, and several incredible museums.

Here are a few museums to visit while you’re there:

6. Journey to the Land of the Midnight Sun. 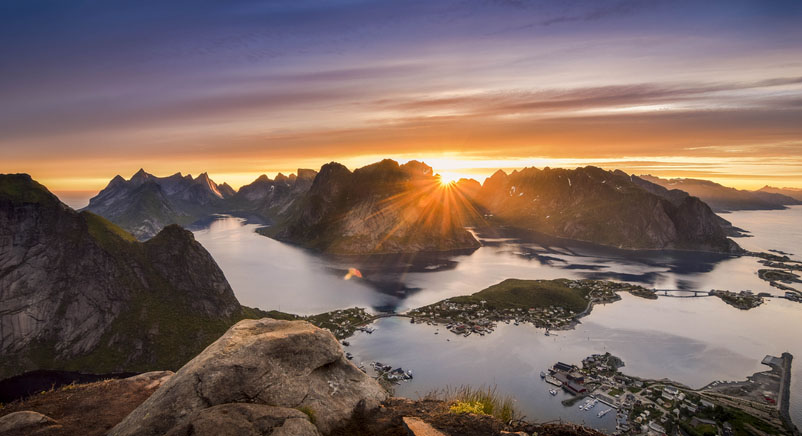 Part of Norway’s mainland and several islands are situated above the Arctic Circle, often referred to as the “Land of the Midnight Sun.” A midnight sun occurs during summer months when the sun is visible for the full 24 hours. Seeing the sun high in the sky in the middle of the night is a truly mind-bending experience—one that will undoubtedly be a highlight of your visit here with us.

Tromsø, Norway, is the northernmost city in the world with a population above 50,000. It’s a cultural hub in Northern Norway with a significant student population and a surprisingly warm climate, given its locale, thanks to the Gulf Stream. 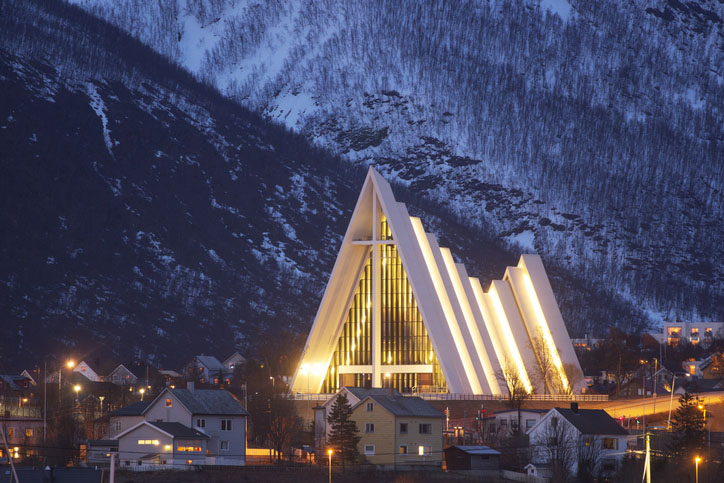 One of Tromsø’s most famous landmarks is the Arctic Cathedral, an iconic church built from glass and concrete that you can visit on our special city tour. While you’re here, you’ll also want to stop in for a drink at one of the city’s many pubs. And we’re not kidding when we say many. Tromsø is known for having more pubs per capita than any other town in Norway, making it the perfect spot to try some of the local brews. 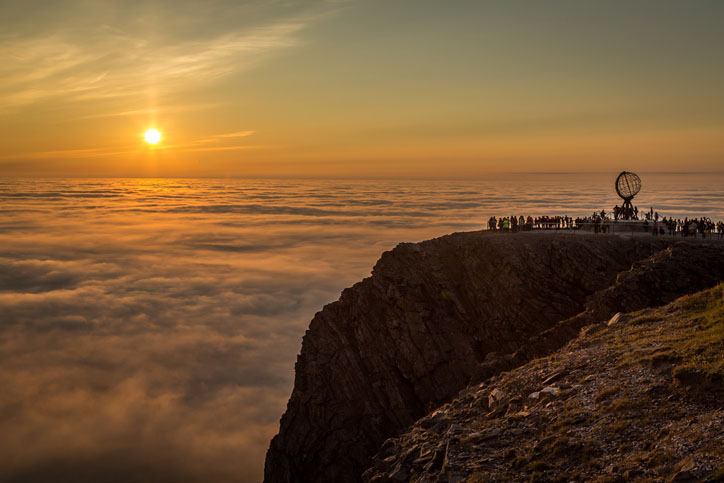 Eager to make your way even further north? Make your way to the North Cape. Situated along the island of Magerøya’s northern coast, the North Cape is where the North Sea meets the Arctic Sea. It’s highlighted by a flat, plateaued cliff over 1,000 feet high that offers sweeping vistas and a spectacular view of the famed midnight sun. Not far from here, you’ll also find the remote hamlet of Honningsvag, which animal lovers (and history buffs) will be interested to learn is the home of Bamse, the iconic St. Bernard who became a symbol of freedom for Norway during World War II. Be sure to snap a photo of the bronze statue paying tribute to the furry hero before making your way to Artico Ice Bar for a cocktail.

7. Fall in love with the glaciers and lakes of Olden. 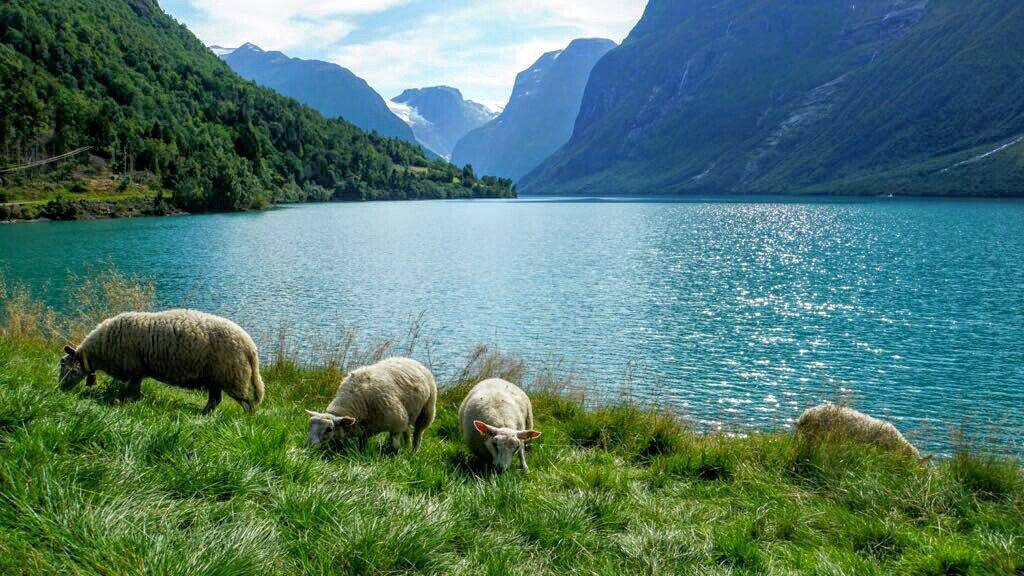 Have you ever seen an emerald green lake? You will when you cruise to Olden, Norway. The serene village sits on the edge of the massive Jostedal Glacier. In fact, it’s the largest glacier in all of continental Europe, covering 188 square miles. 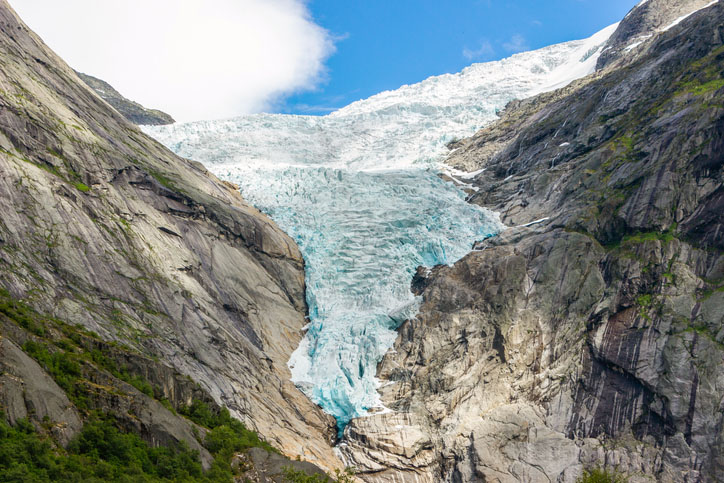 The most famous glacier arm of Jostedalsbreen, as it’s called in Norway, is Briksdalsbreen. When you visit this stunning landmark with us, you can trek the rugged terrain surrounding the mighty frozen glacier, taking in some of the most stunning scenery in Norway. The glacial waters melt to form lakes of such vivid colors they must be seen to be believed. 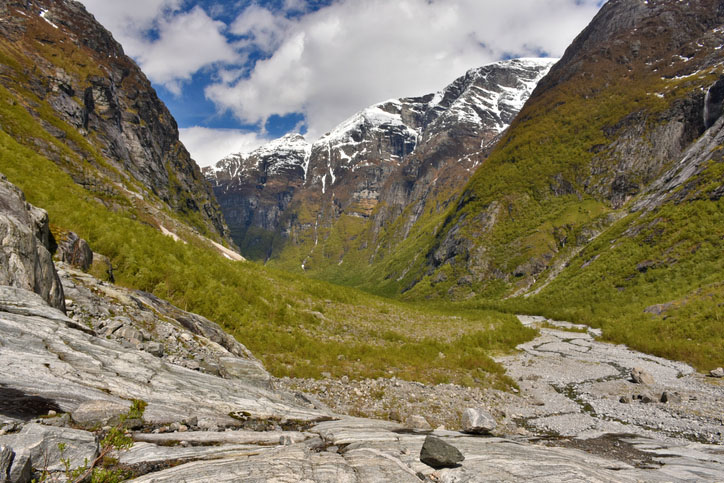 For a more leisurely experience, make your way from Olden to the nearby Lodal Valley and its famous Kjenndalen Glacier. Lake Loen is known for being particularly green in color because the glacier is constantly crushing up rock and clay particles, which are carried into the lake by rivers.

There’s no way to share everything we love about Norway in just one list. We could write about this fantastic country all day, but to truly appreciate it, you must visit for yourself! We look forward to exploring the stunning landscapes of Norway with you soon.