The Most Beautiful Churches in the Mediterranean

History. Spirituality. Art. Architecture. There are plenty of reasons to visit a church while traveling, and the Mediterranean is home to some of the most stunning and historic ones in the world.

These 10 must-see churches in the Mediterranean are renowned for their striking exteriors, breathtaking interior design, and cultural relevance. Within their walls, you’ll find incredible mosaics, sculptures, paintings, and other works of art.

It’s only fitting that we begin our tour of Mediterranean churches with St. Peter’s Basilica, the world’s largest—and arguably most beautiful—church. 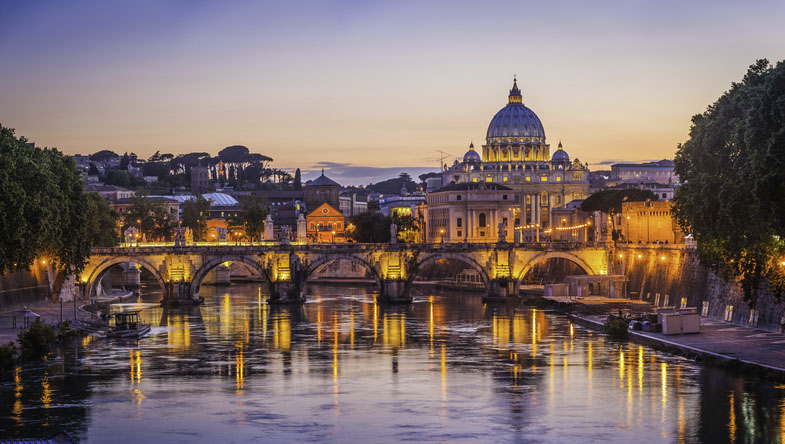 The stunning Renaissance church took well over a century to complete and is attributed to many architects. The original architect, Donato Bramante, died less than a decade after the church’s 1506 groundbreaking. Michelangelo eventually took over the project. He, too, died before the church was complete but left behind the design for his masterpiece: the incredible, iconic dome. Later, Carlo Maderno became involved in the project and designed the church’s façade.

In addition, the famous Baroque artist Gian Lorenzo Bernini had a significant influence on the aesthetic of St. Peter’s Basilica. He created the ornate Baldacchino, a pavilion-like bronze structure that stands above the church’s altar and beneath Michelangelo’s majestic dome. Bernini also designed a bronze encasing for the relic the Chair of Saint Peter and decorated the Chapel of the Sacrament. 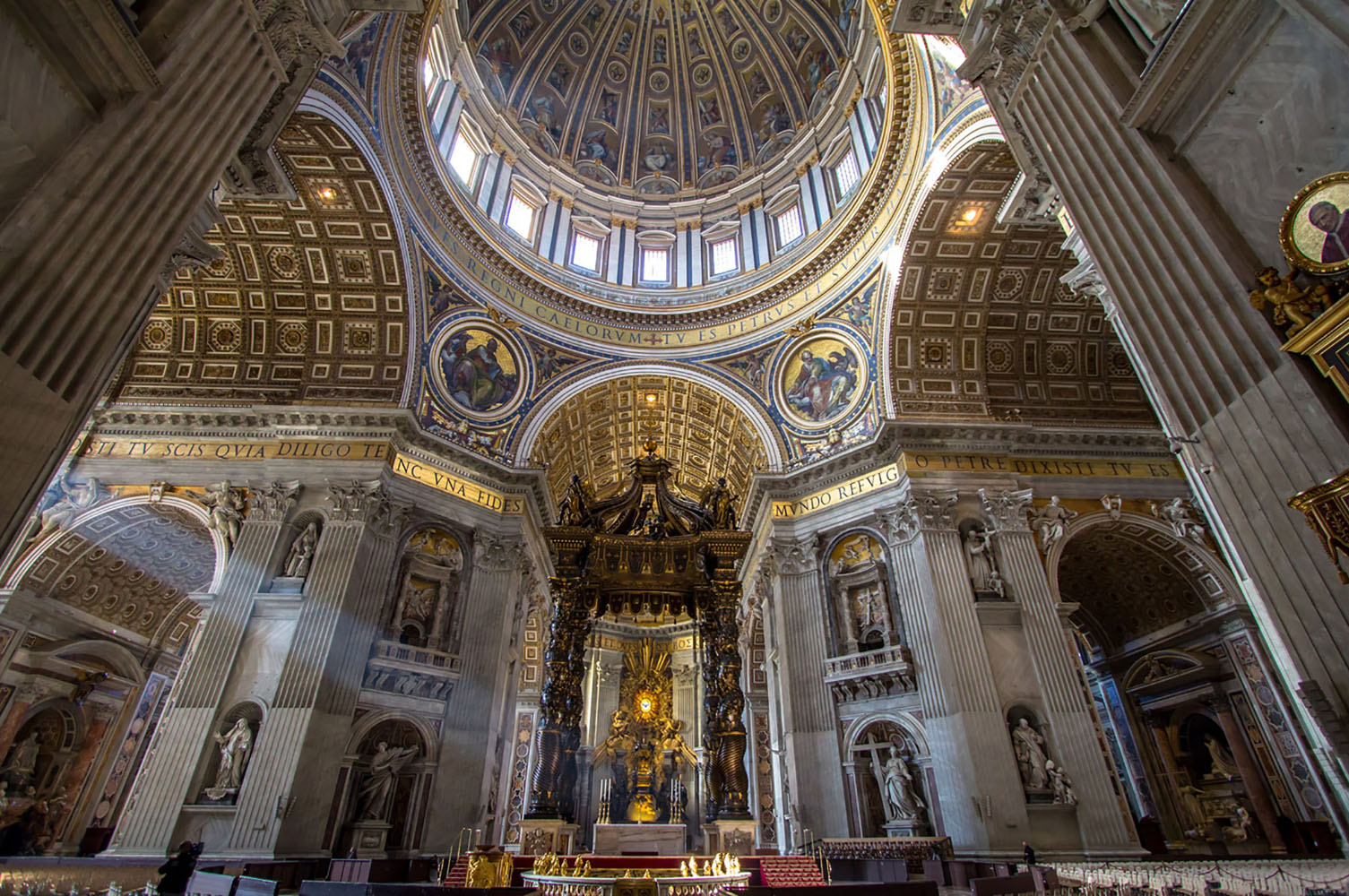 Of course, Michelangelo is renowned for more than just the dome at St. Peter’s. At just 24 years old, he sculpted the haunting Pietà, which resides at the Basilica. Then, of course, he painted the ceiling of the breathtaking Sistine Chapel. The Sistine Chapel is not part of St. Peter’s Basilica, but is the Papal Chapel in the Vatican Palace and is accessed via the Vatican Museums.

When you cruise to Rome with us, you can easily visit St. Peter’s Basilica, Vatican Museums, and the Sistine Chapel—plus, make a rare trip to the St. Peter’s in Chains Basilica—during our “Rome, the Eternal City” shore excursion.

It comes as no surprise that one of the Mediterranean’s most beautiful churches is located in Seville. After all, the city is home to one of the world’s best celebrations of Holy Week. 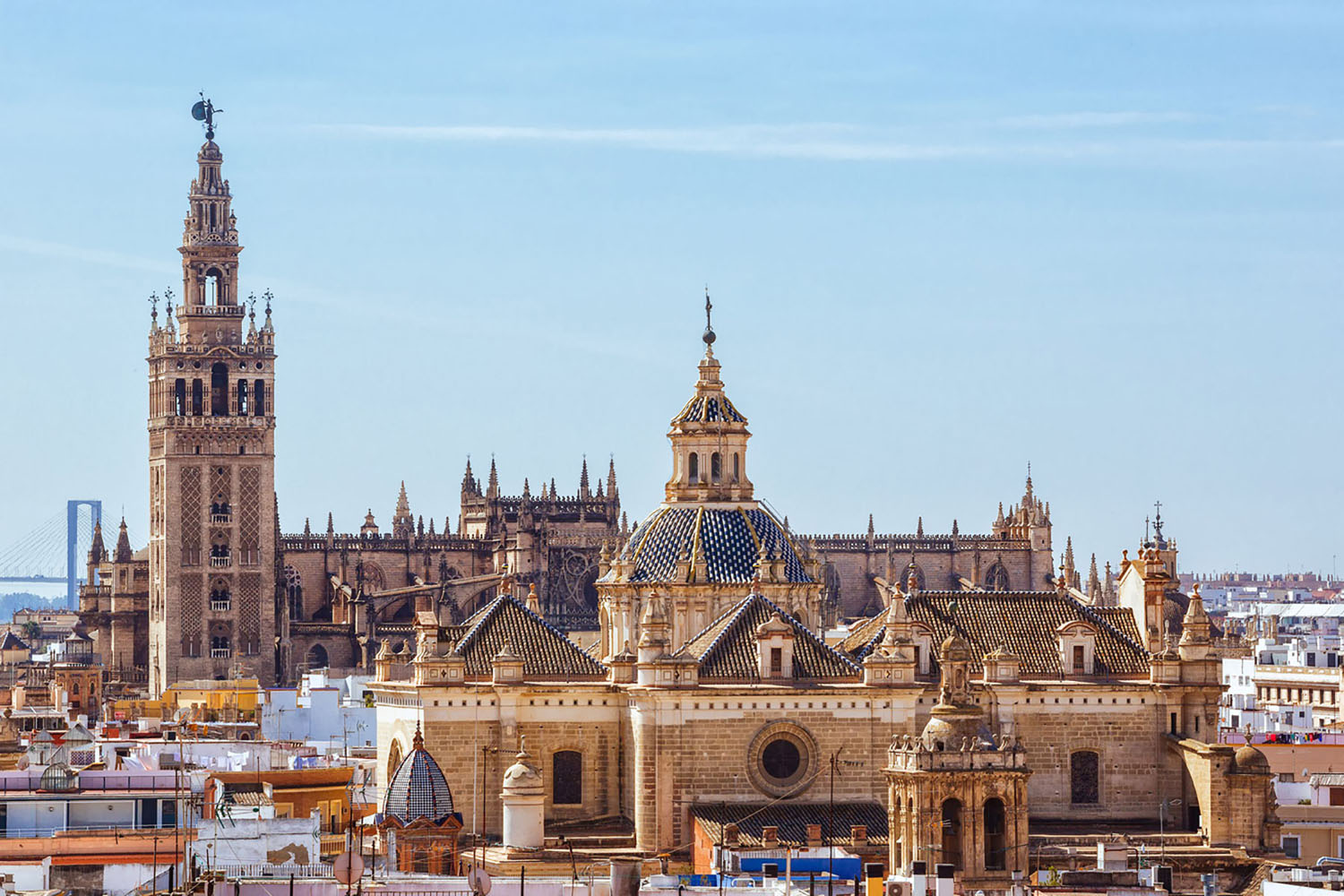 Also known as the Cathedral of Saint Mary of the See, Seville Cathedral is the third-largest church in the world and the largest cathedral (a designation related to whether a church is also the seat of a bishop). The gothic cathedral dates back to 1401 and was built on the site of the Almohad Mosque. 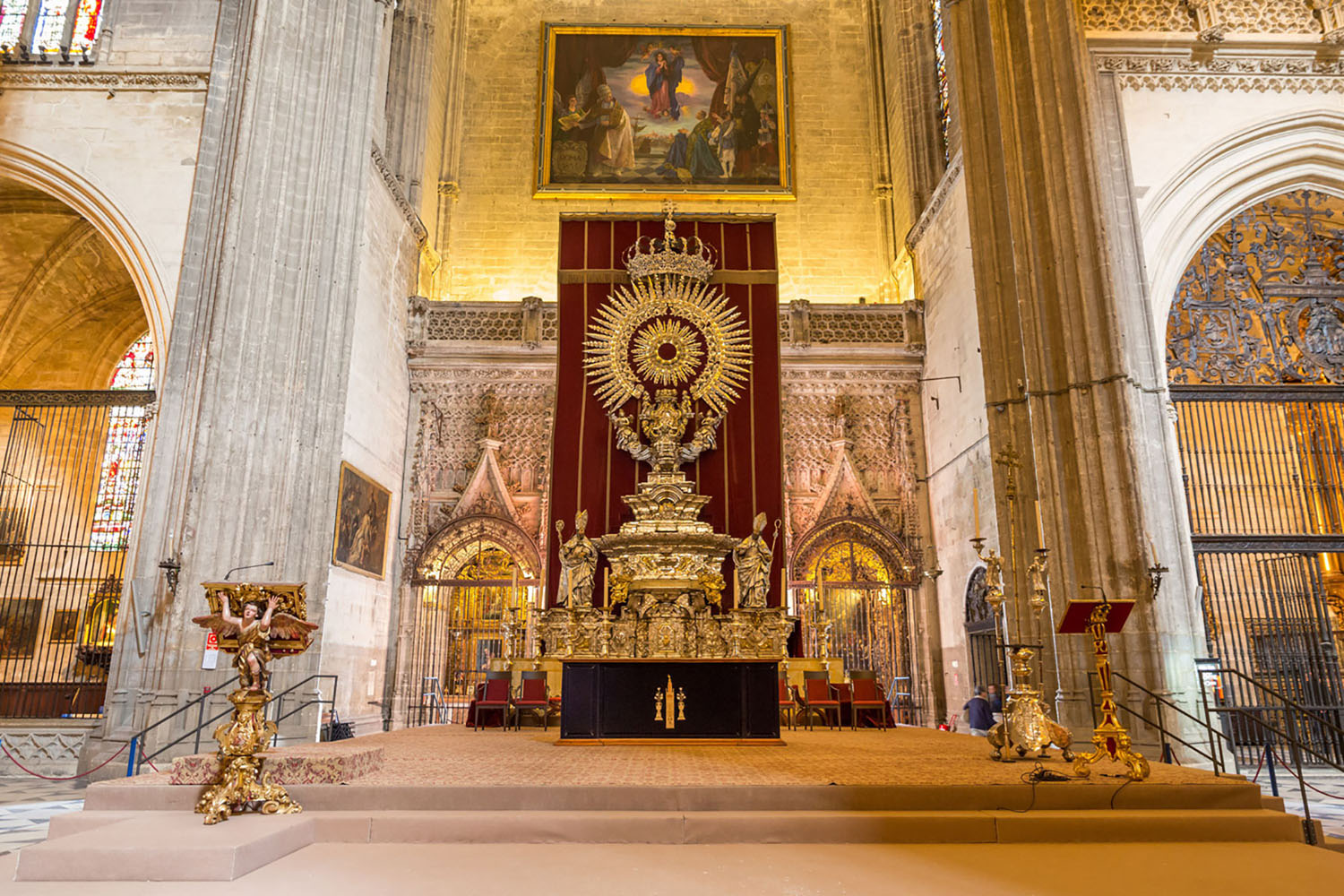 When you visit the Seville Cathedral, take note of the intricate bell tower called the Giralda. It was the Almohad Mosque’s minaret and dates back to the 1100s. Once inside, you can’t miss the cathedral’s glimmering gold altar, which features more than 1,000 wood-carved biblical figures. The cathedral is also the final resting place of Christopher Columbus’ tomb and contains many important works of art from Seville’s 17th-century Golden Age.

The Florence Cathedral in Italy

The iconic Florence Cathedral is a mix of several architectural styles (Italian Gothic, Renaissance, and Gothic Revival) as a result of initially taking 140 years to complete, and seeing multiple redesigns in the following centuries. 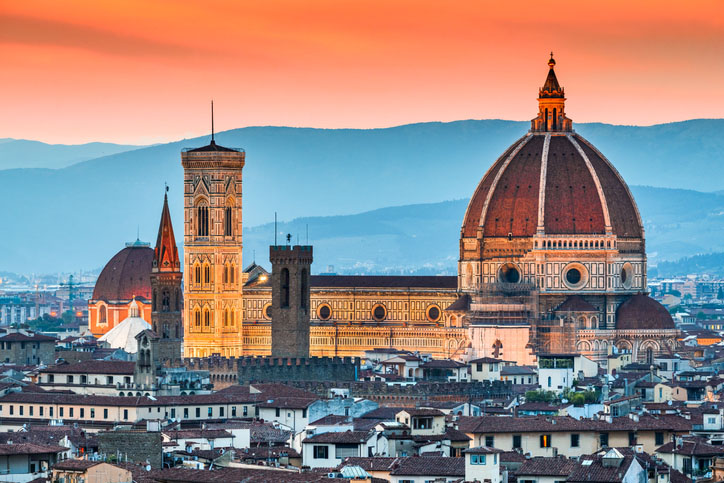 Like many of Florence’s major landmarks, il Duomo (as the church is known locally) is connected to the legendary history of the Medici family. On Easter Sunday in 1478, a Medici ruler was stabbed to death in front of the congregation. It was the first move in a failed plot by the rival Pazzi family to wrest control of Florence from the ruling Medicis.

Thanks to its magnificent brick dome—a marvel of engineering at the time—the Florence Cathedral is an emblematic feature of the city’s skyline. Designed by the famed Renaissance architect Filippo Brunelleschi, it’s still the largest masonry dome in the world. Inside, the dome is decorated with gorgeous frescoes depicting the Last Judgement. 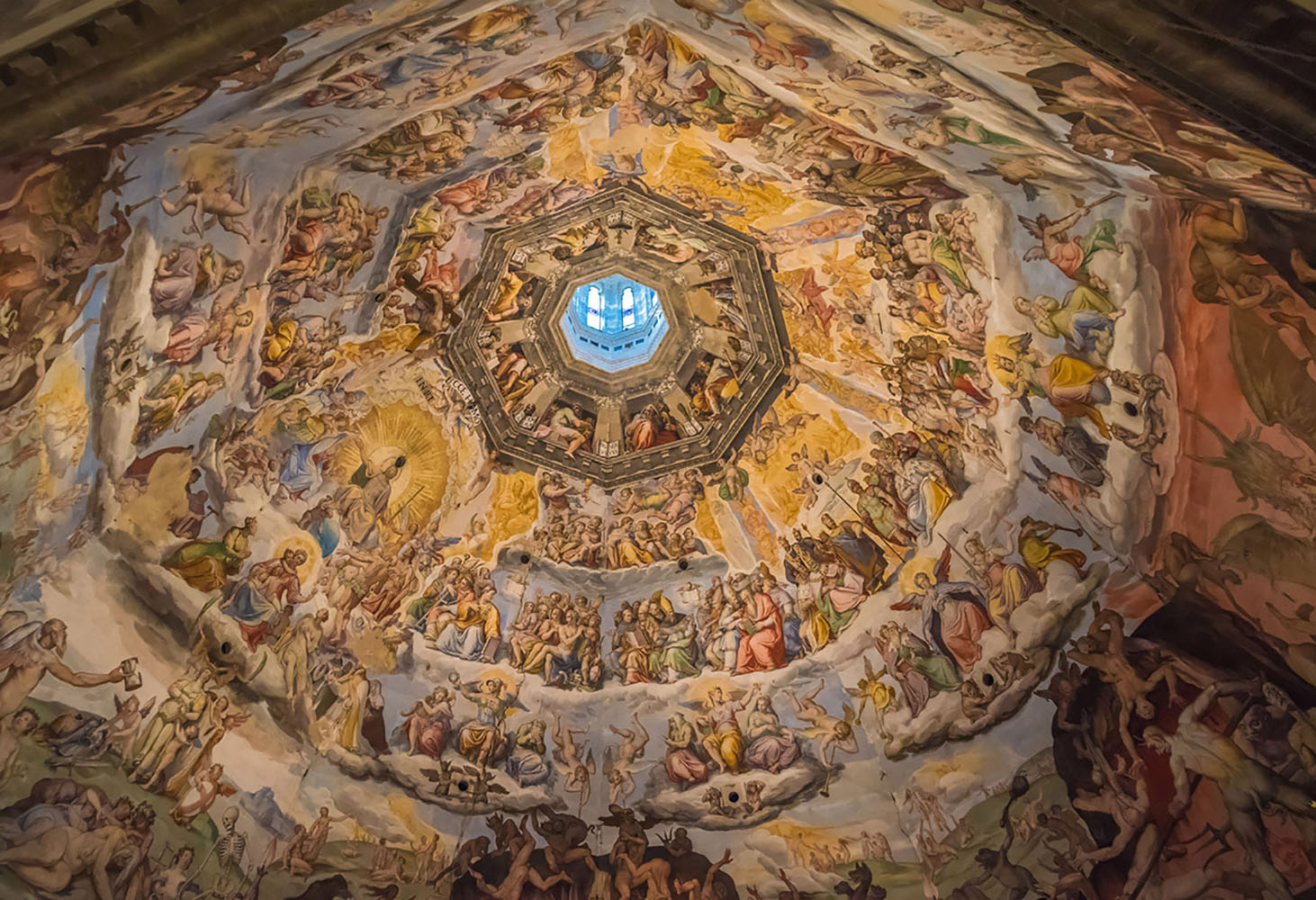 The vast, empty gothic interior emphasizes the size of the cathedral. It’s among the largest in the world, with an area of 8,300m2. (For comparison, St. Peter’s Basilica’s interior is an astonishing 15,160m2. Nearly double!) 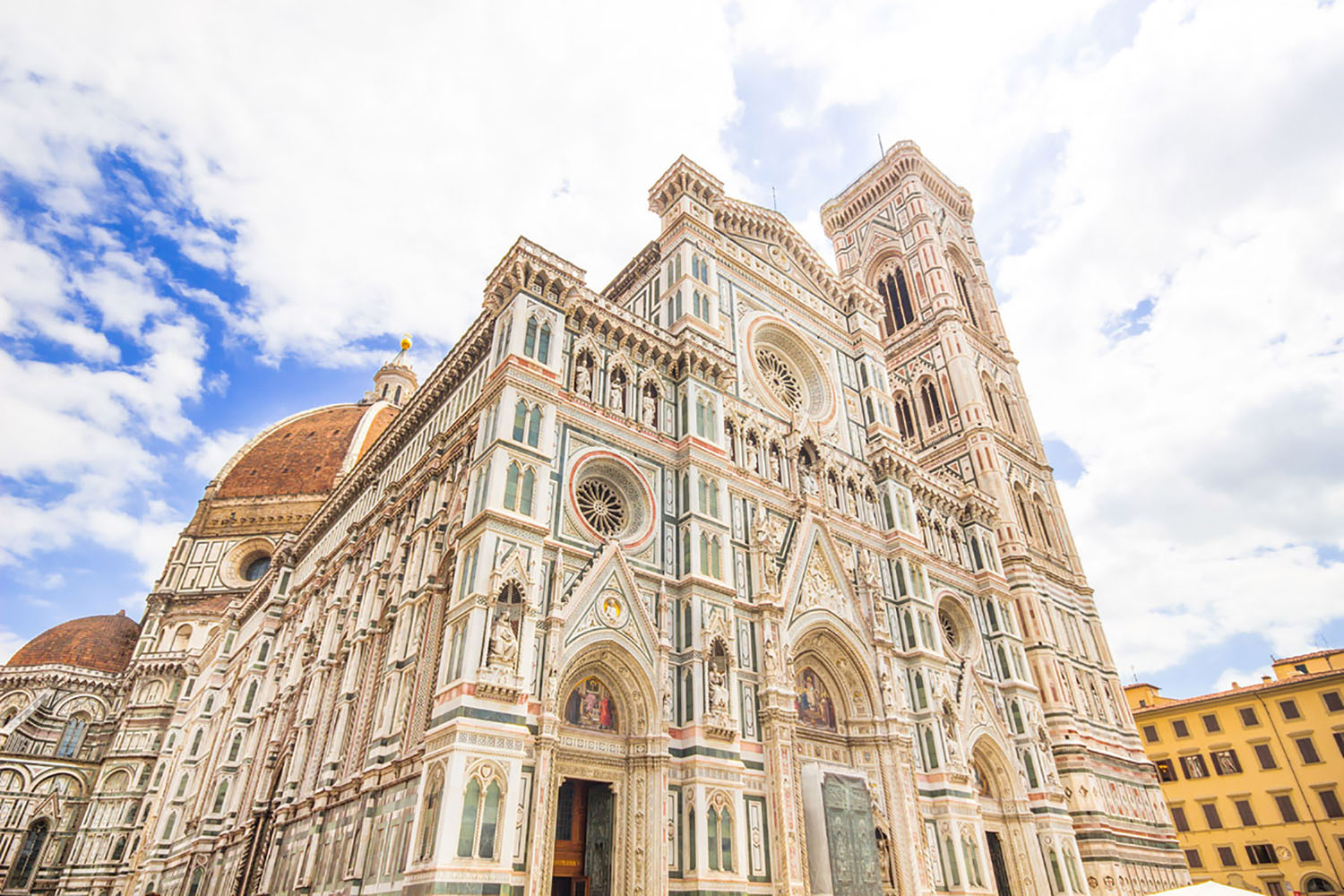 The church’s façade has been changed and redesigned several times. Today’s neo-gothic version was created between 1876 and 1887 and features green, pink, and white marble. Along with the Baptistery and Campanile, it makes for a stunning landmark in Florence’s historic center.

The Cathedral of Santa Maria of Palma in Spain

This Gothic cathedral, oft referred to as La Seu, is one of Palma de Mallorca’s most prominent landmarks. Its architectural interest is thanks to the Northern European influences on the otherwise Catalan Gothic design. The cathedral’s 1,236 pieces of stained glass and massive rose window are stunning, and the central nave is among the tallest in the world. The cathedral took 372 years to complete and boasts a fascinating history of ancient conquests and oaths, earthquakes, and restorations. 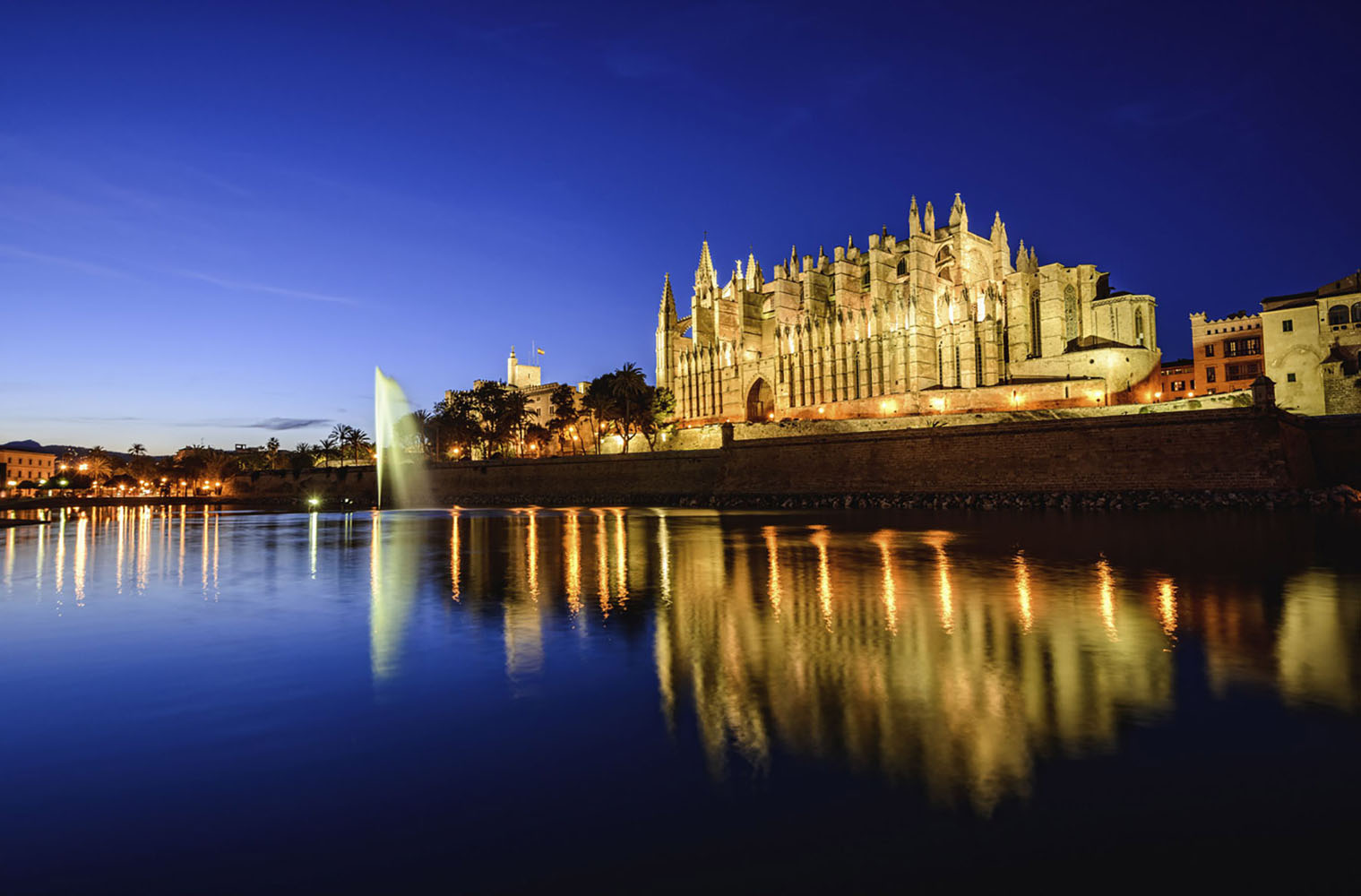 In 1901, three centuries after construction was complete, Antoni Gaudi was invited to take over a restoration project that had been ongoing for 50 years. He began work but abandoned the project after an argument with the contractor, with only a few of his designs implemented. When you visit the cathedral (you can do so during this shore excursion), take note of the altar canopy—that was Gaudi’s. 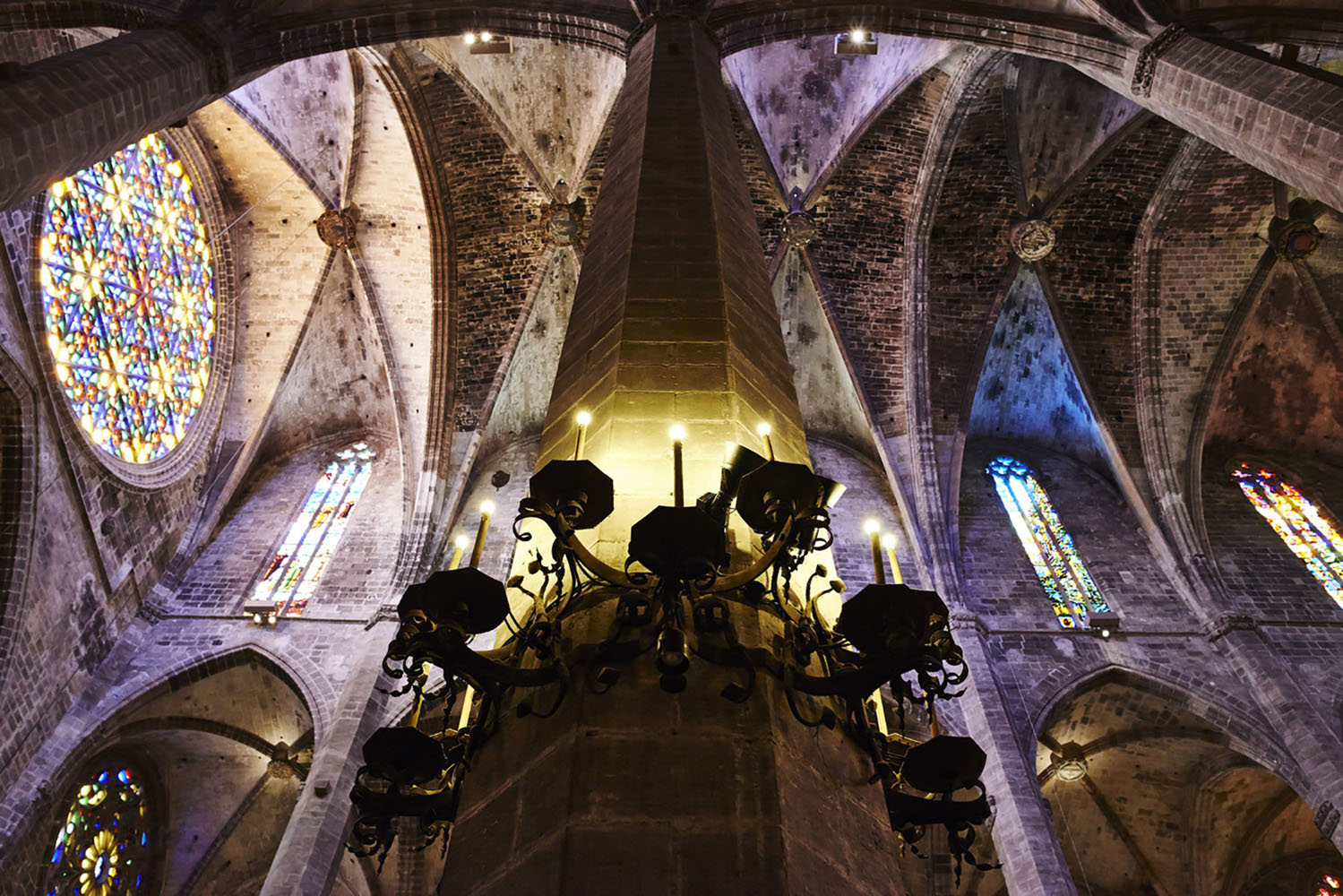 The cathedral’s sandstone exterior is particularly beautiful when illuminated at night and is a sight that shouldn’t be missed.

The Basilica of the Sagrada Familia in Spain

Antoni Gaudi’s architectural masterpiece has famously been under construction for well over a century. Construction of the Sagrada Familia began in 1882 and is scheduled for completion in 2026. Once complete, it will be the tallest church in the world with spires reaching 560 feet. 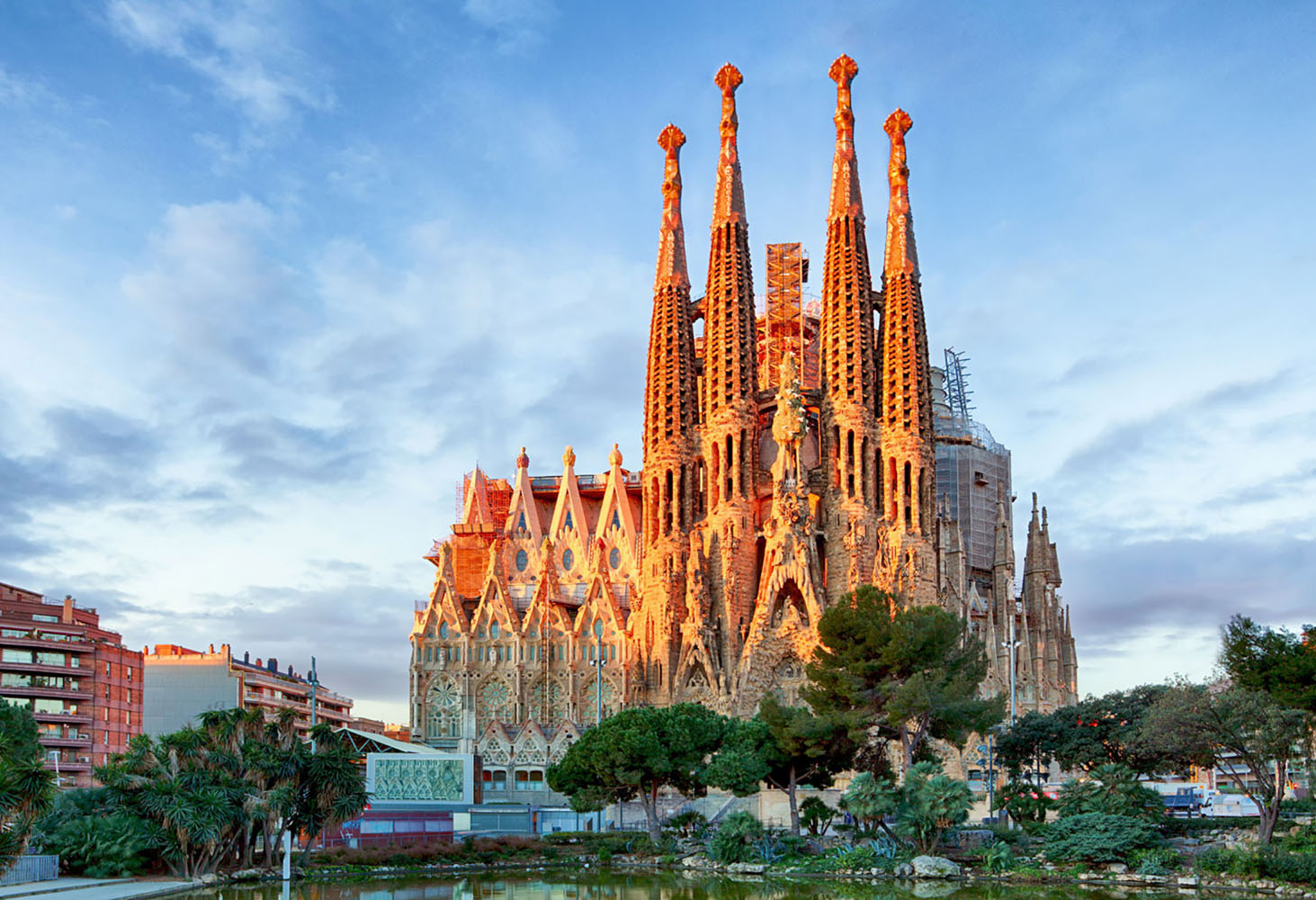 The Sagrada Familia’s construction originally began under the architect Francisco de Paula del Villar, but Gaudi took over just a year later. Gaudi worked on the project until his death in 1926. At that time, the project was less than a quarter complete. It’s one of the greatest examples of Catalan Modernism in architecture. 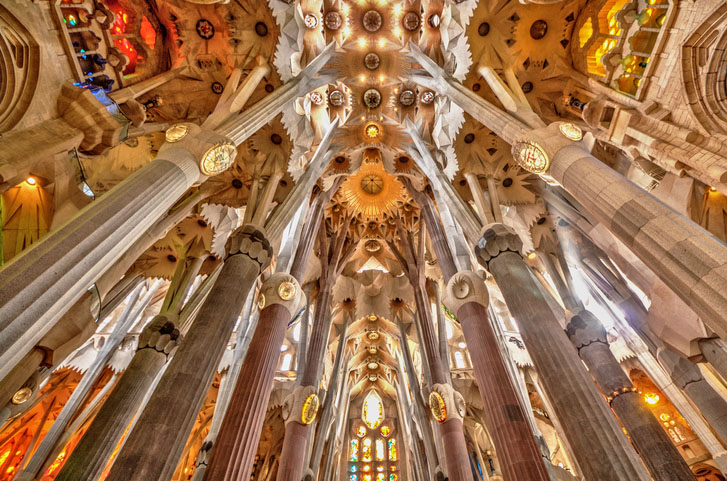 Seeing the Sagrada Familia is a must when in Barcelona. We recommend visiting with our “An Architect’s Perspective on Gaudi” shore excursion, which includes an interior visit to the basilica and stops at several of Gaudi’s other works. With a professional architect as your guide, you’ll come away with fascinating inside insights into the church’s design and Gaudi’s important contributions to Barcelona’s cityscape. Plus, the church draws almost 3,000,000 visitors annually; taking a tour with us will let you skip those time-consuming queues.

This basilica is the most-visited site in Marseilles. It’s also the site of a popular pilgrimage for Assumption Day, a Catholic feast and public holiday in France.

Notre-Dame de la Garde was built upon the foundations of an ancient fort at the highest point in Marseilles. The lower church was carved from rock in a Romanesque style, while the upper church is Byzantine Revival in design. It features stunning mosaics (meticulously restored in the early 2000s), murals, and a large, gilded statue of the Virgin Mary atop the bell tower. 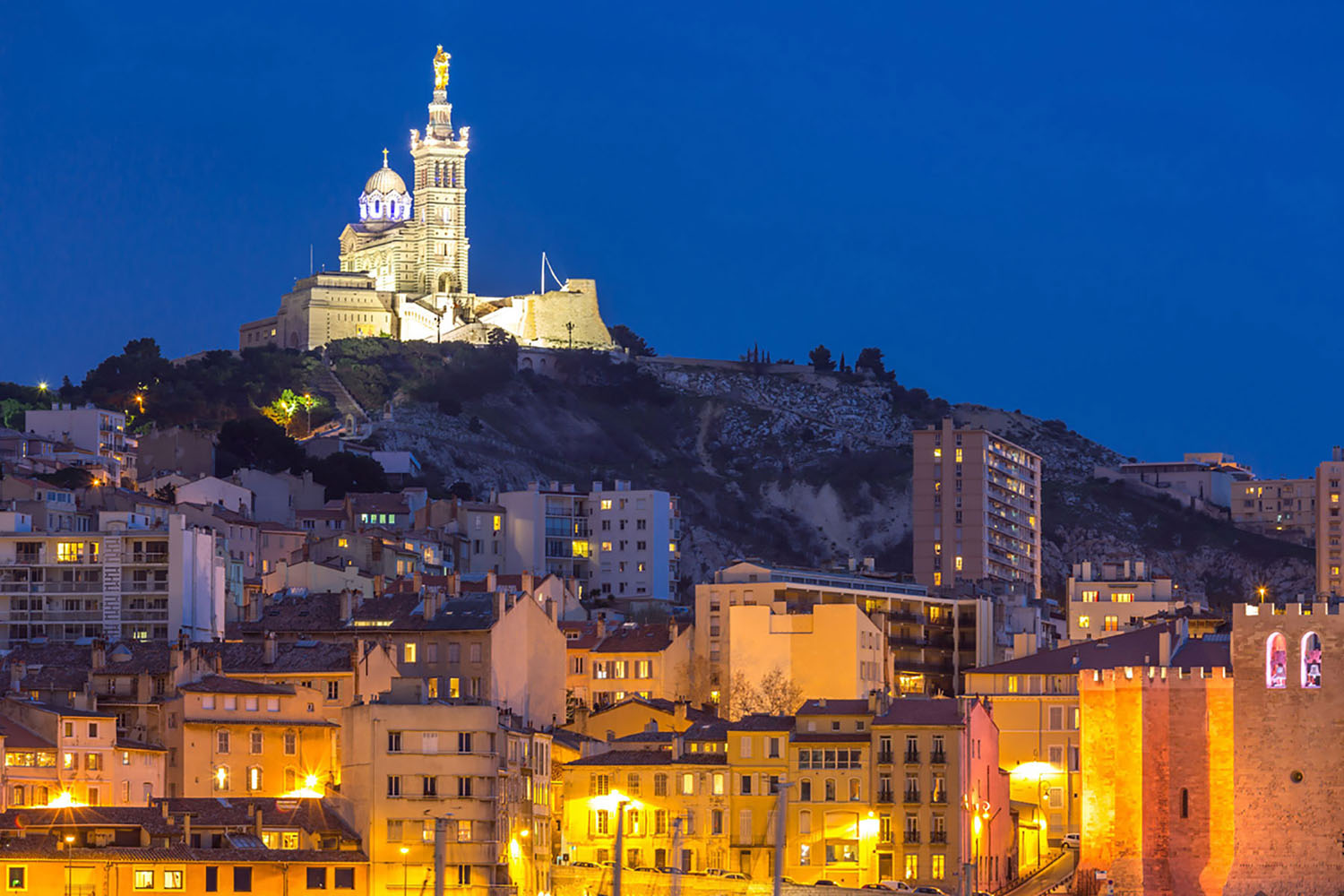 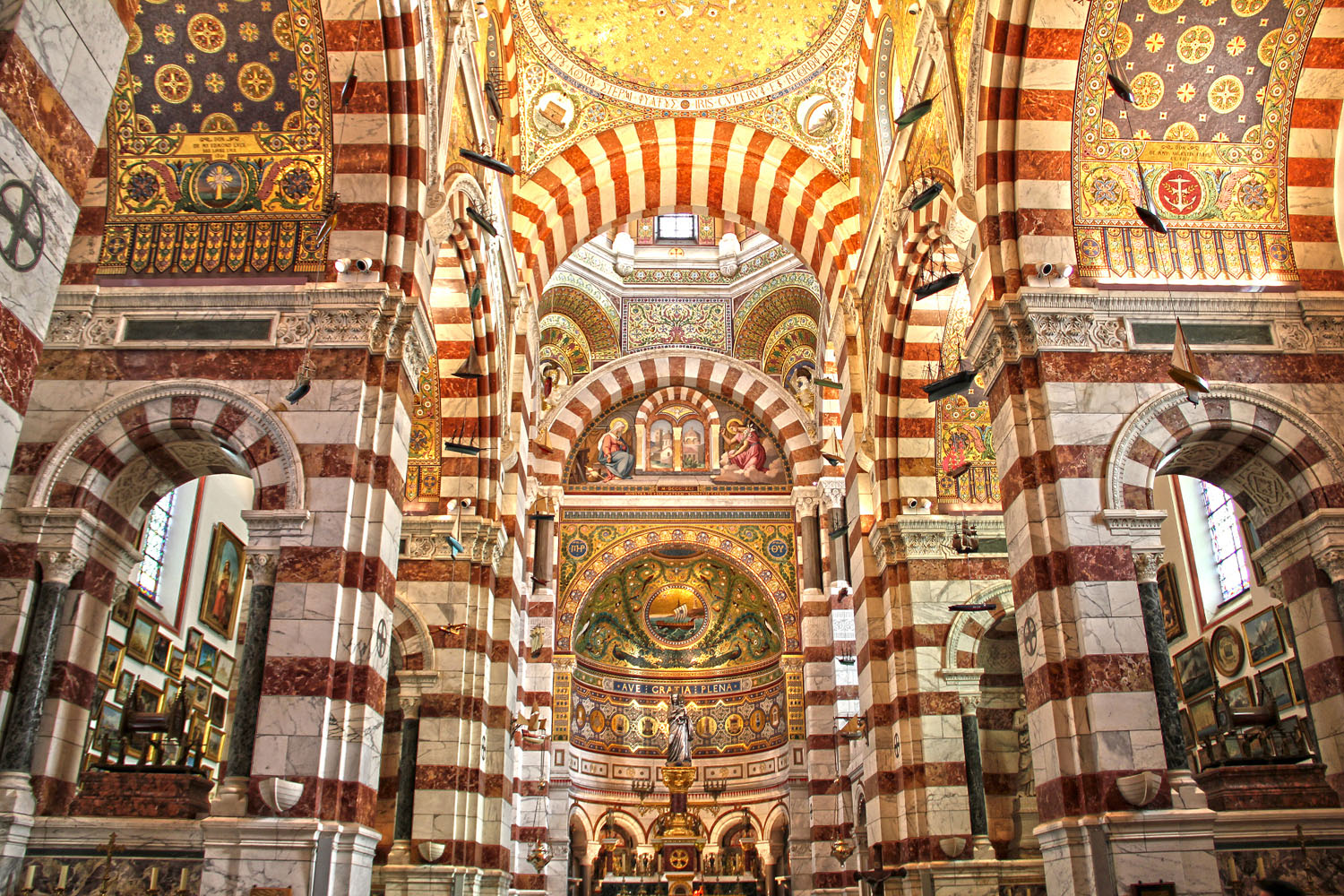 You can visit Notre-Dame de la Garde, along with other highlights of Marseilles like Longchamp Park and Old Port, during this shore excursion.

Once you’ve set foot in St. Mark’s Basilica, you’ll understand why it’s known as Chiesa d'Oro (Church of Gold). The basilica’s gilded mosaics glinting and sparkling in the sunlight is a sight to behold. 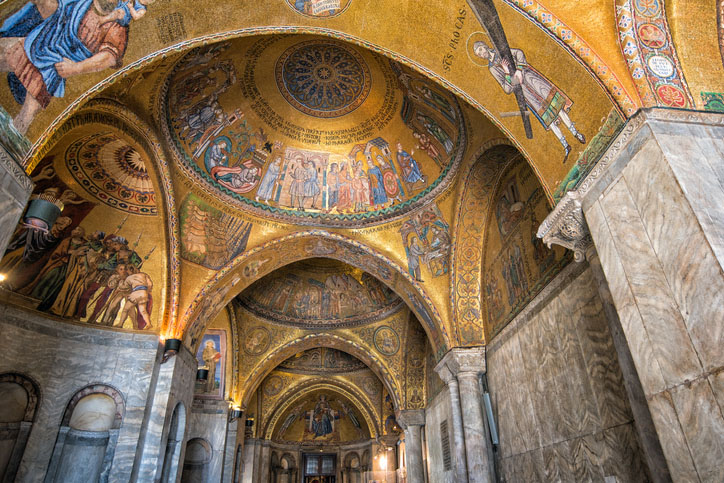 The basilica’s outlandish opulence is no accident. Constructed between 978 and 1092, it was intended to serve as a symbol of the Republic of Venice’s wealth and prosperity. St. Mark’s originally served as the private chapel of the city’s ruler, called a Doge (hence its proximity to Doge’s Palace) and only became Venice’s official cathedral in 1807.

The basilica has five domes and is considered one of the best examples of Italo-Byzantine architecture in the world. However, there are Gothic and Romanesque influences as well. The church’s famed golden mosaics cover an astonishing 8,000m2 of the upper levels. 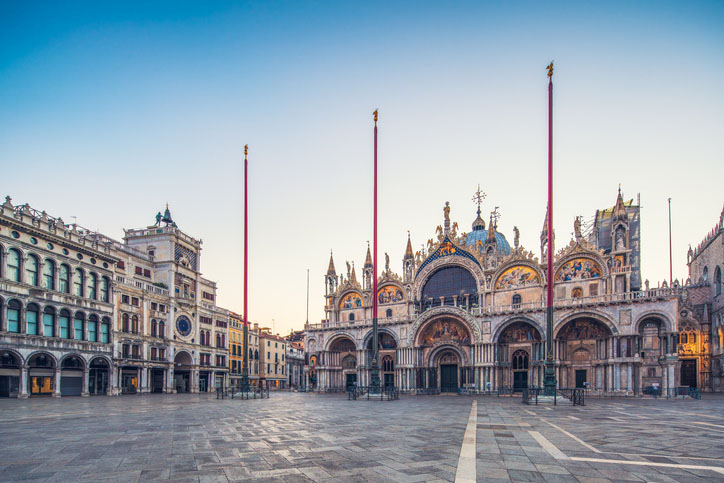 When you enter, take special note of the mosaics in the main porch. These are the oldest (dating back to about 1070) and are of the best quality. Only about 1/3 of the mosaics are considered to be original; the rest were “restored” or replaced by Doges, to a lesser quality. Better yet, book a guided interior tour of the basilica so you don’t miss a single detail.

Church of Panagia Ekatontapiliani in Greece

Panagia Ekatontapiliani translates to “the church with 100 doors”—but don’t waste your time counting them when you visit, because the Byzantine church complex falls short. In fact, the origin of the church’s name is unknown. 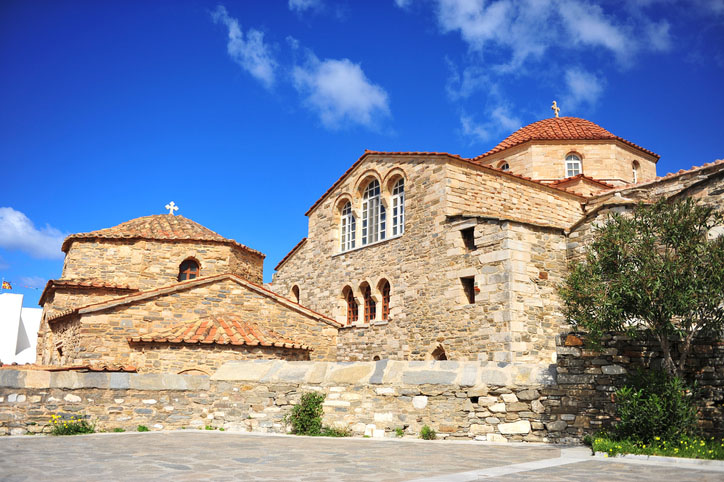 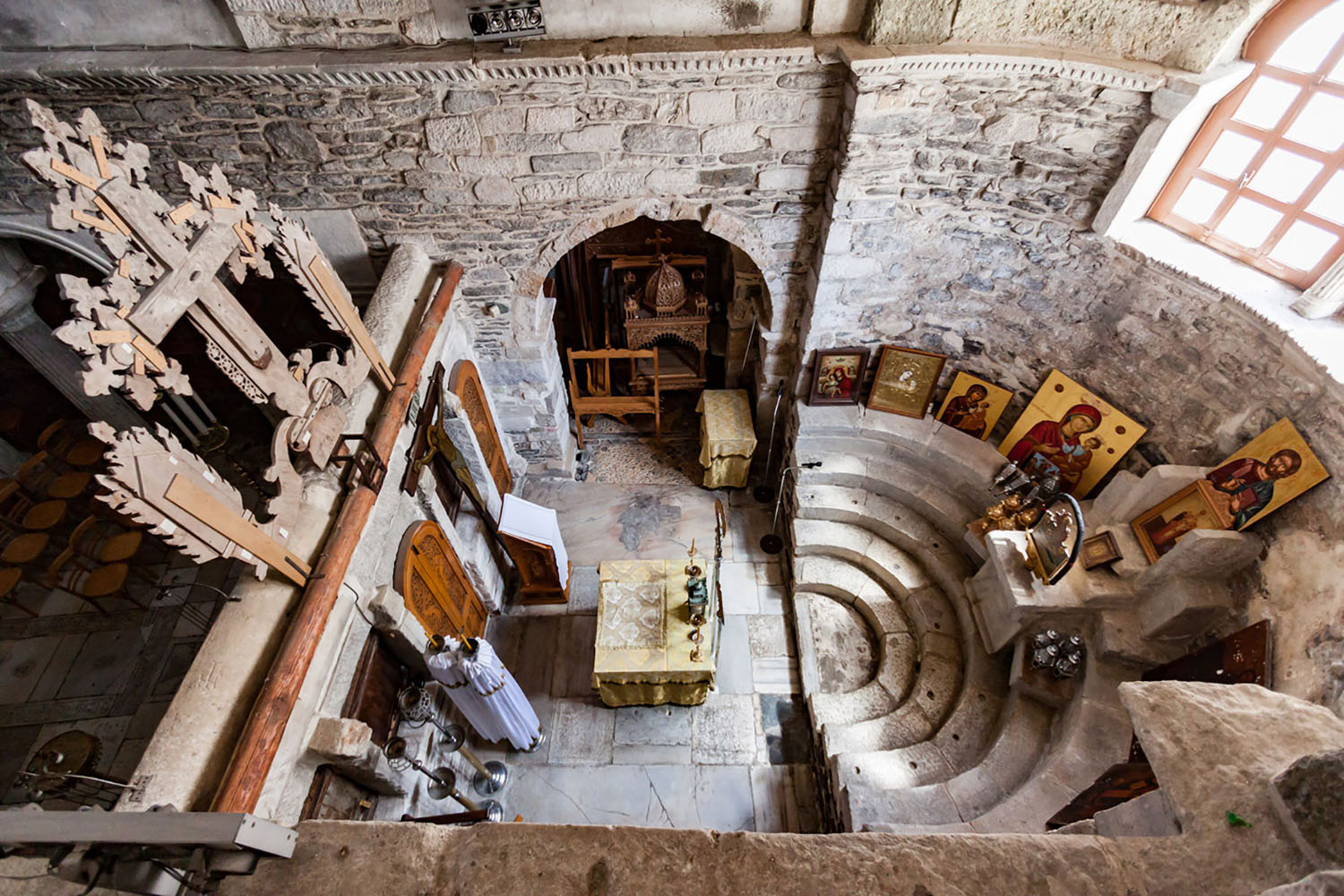 Panagia Ekatontapiliani is located in the idyllic town of Parikia on the Greek island of Paros. It dates back to 326 and even predates the adoption of Christianity as the state religion. (That didn’t occur until 391.) When you visit, don’t miss the silver-clad icon of the Madonna. Like Notre-Dame de la Garde, thousands make a pilgrimage to Paros on Assumption Day in her honor. Enjoy a guided tour of the church, followed by a visit to a historic winery, during this walking tour of Parikia.

The Cathedral of St. James in Croatia

It’s easy to see why this gorgeous stone cathedral made the list of the most beautiful churches in the Mediterranean. It’s the most important piece of Renaissance architecture in all of Croatia and the city of Sibenik’s most famous landmark. 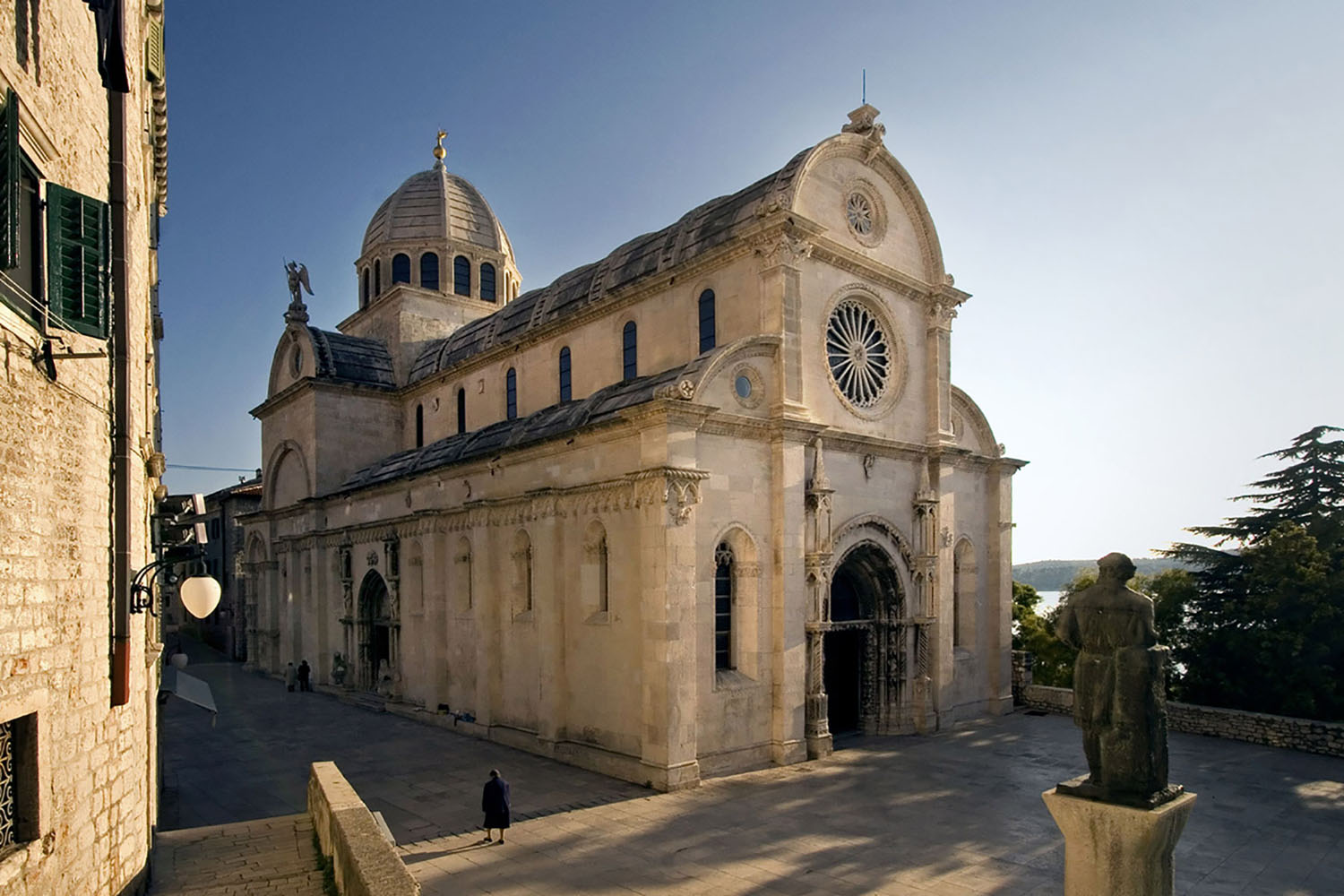 Constructed from limestone and marble, three architects contributed to the design of the church from 1431 until 1536: Francesco di Giacomo, Georgius Mathei Dalmaticus and Niccolò di Giovanni Fiorentino. All three employed constructions techniques that were unprecedented for the era.

St. James’s most renowned feature is an incredible frieze on the rear exterior wall—don’t miss it! It features 71 sculpted portraits of men, women, and children. Take your time, as you’re staring history in the faces. The features, hairstyles, and expressions all vary because they are portraits of actual townspeople who walked the cobblestoned streets of Sibenik centuries before. Visit the church and walk in their footsteps during this tour. 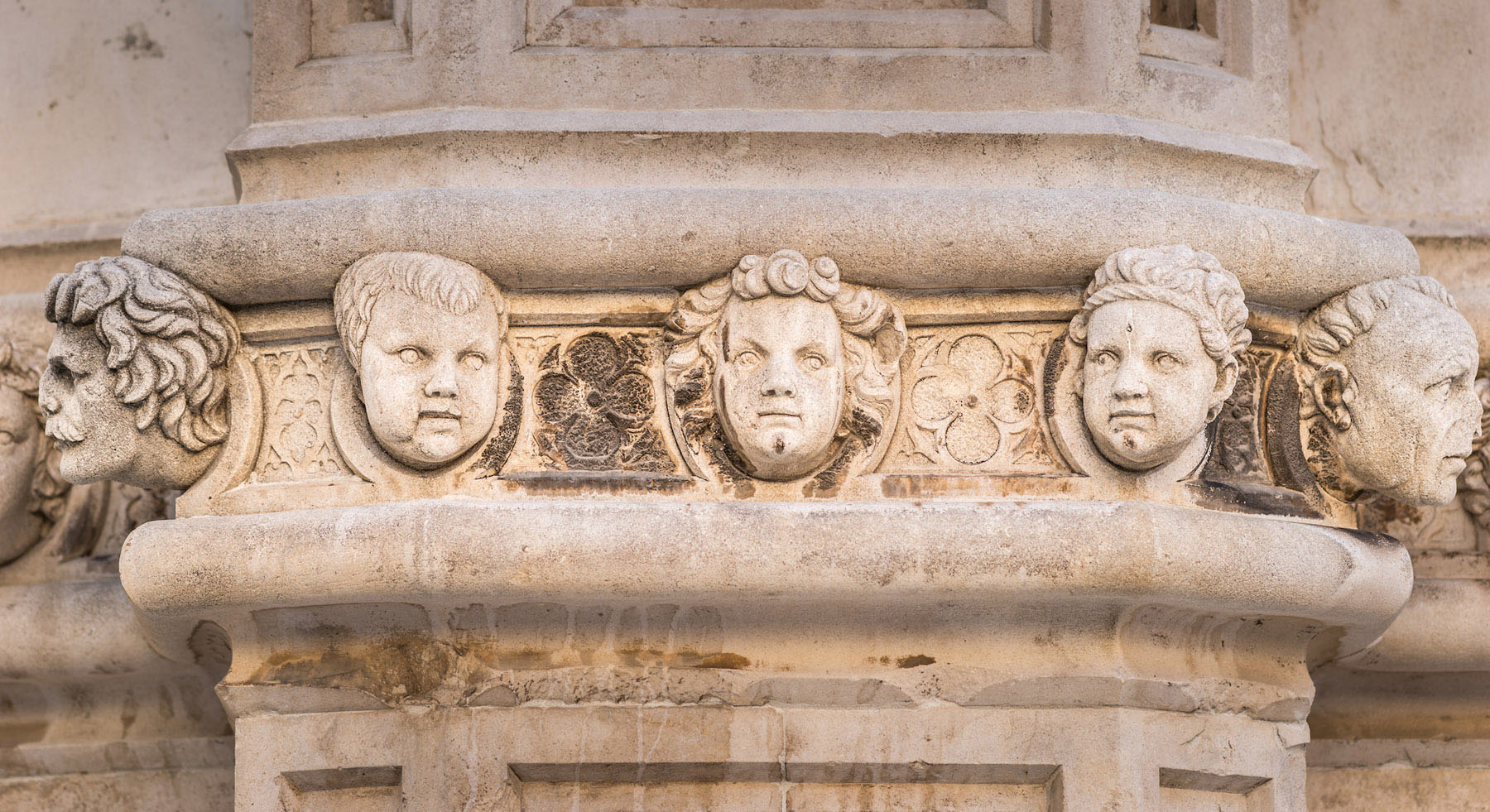 Our Lady of the Rocks Church in Montenegro

Kotor’s most impressive building, from an architectural standpoint, might be St. Tryphon’s Cathedral. But we’re partial to the much smaller Our Lady of the Rocks Church—it takes one’s breath away during a sail-in to Kotor’s Boka Bay. 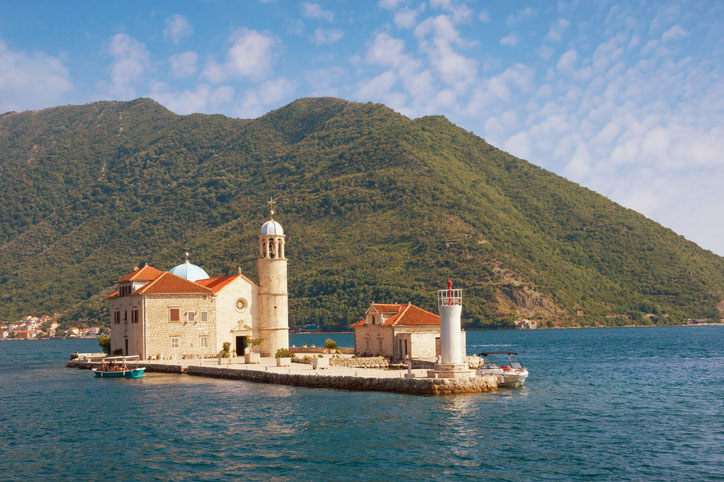 Built atop a small, man-made island, local legend says the islet was constructed over centuries after two fishermen saw an icon of Madonna in a pile of rocks and vowed to build a church there. Seamen would deposit a new rock on the island following each safe journey. The tradition of throwing a rock into the sea carries on even today. Hop on a boat and visit the church for yourself during this tour of Kotor, Perast, and the area.

Cruise to the Mediterranean with Azamara

Did our tour of the most beautiful Mediterranean churches leave you praying for a vacation? We’ve got you covered. With three boutique cruise ships that call on the big marquee ports and smaller hidden gems, we know the right Mediterranean cruise is here waiting for you. You can browse our Med itineraries here.