The Architecture of Spain

Sunny, spectacular Spain. It’s a country known for its passion and lust for life. Everywhere you look, you’ll find breathtaking sights, incredible food, and a diversity of culture that charms and captivates in equal measure. And it’s this combination of attributes — passion, diversity, creativity — that has made Spain one of the most architecturally fascinating countries in Europe and, indeed, on Earth. From towering churches to twisting terraces, you’re never far from a building in Spain that will stop you in your tracks in wonder. And today, we’re sharing some of our favorite Spanish architecture with you — all of which you can see when you cruise to Spain with us. 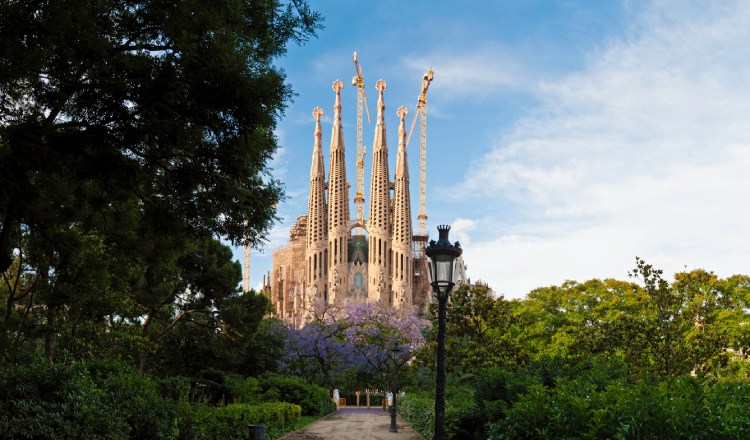 It would be impossible to discuss the architecture of Spain without mentioning the Temple Expiatori de la Sagrada Família (Expiatory Temple of the Holy Family). For many, this is the definitive landmark of Barcelona. And that’s saying a lot, considering the feast of architecture that awaits those exploring the Catalan capital.

The masterwork and vision of iconic Catalan architect Antoni Gaudi, La Sagrada Família is a complex combination of biblical allegories and natural symbols that reflect Gaudi’s philosophy that nature is the work of God. How complex? Well, the basilica has been under construction for nearly 140 years. And while plans were announced to have construction finished by 2026 — the hundredth anniversary of Gaudi’s death — that date has again been pushed, with a new completion date yet to be announced. Nevertheless, the seemingly endless construction time hasn’t stopped what will be the tallest church in the world from becoming Barcelona’s biggest tourist attraction and an absolutely iconic symbol of the city’s skyline. Gaudi wasn’t bothered by the long timeline either, having once remarked, “My client is not in a hurry”, when asked about construction dragging out potentially for decades (and, ultimately, more than a century). 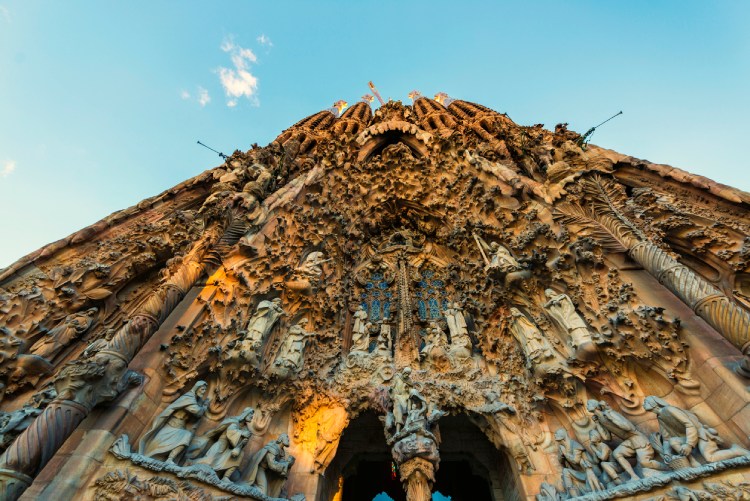 Gaudi was well aware that he wouldn’t live to see the completion of the project when he took it over just before the dawn of the 20th century. But that did not phase him as he worked to construct a church that told the story of the life of Jesus in three parts — Nativity, Passion, and Glory — through organic symbolism, breathtaking stained glass, and architectural design elements. Interestingly enough, Gaudi was well aware that others may not share his comfort in a long timeline. So to prevent his ambitious project from being halted after his death or once the basic functions of a church (worship) were possible, Gaudi put off work on the central nave and instead focused on the exterior of the church. We think he made the right choice.

Want to see La Sagrada Família through an expert’s eye? Join us for the An Architect’s Perspective On Gaudi shore excursion. We’ll tour several of Gaudi’s most famous works and offer analysis and insight that only a professional can provide. 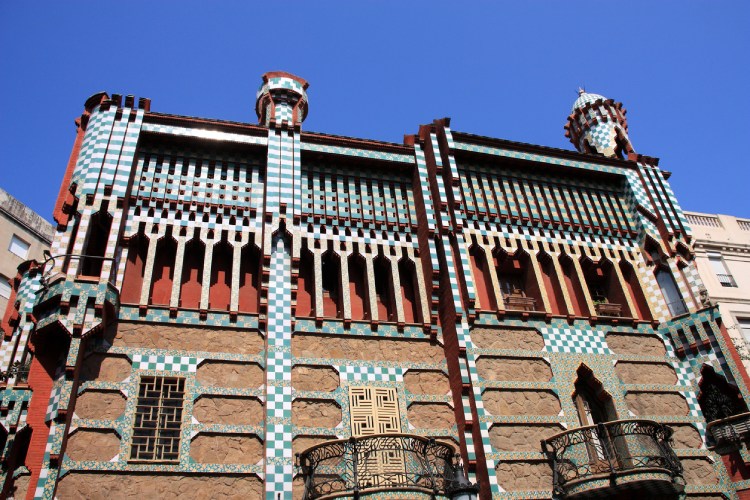 From Gaudi’s last major project in Barcelona to his first, Casa Vicens is known as Gaudi’s first masterpiece. Built between 1883 and 1885, the home laid the groundwork for what would become Modernism, with many of the movement’s regular features laid out here for the first time. There are also examples of the Orientalist style on display here, which incorporates elements inspired by projects in India, Persia, and Asia. This influence is particularly noticeable in Vicens’ ornate tiling and exposed brick.

What makes Casa Vicens so fascinating, especially for those interested in Gaudi, is how it helps trace his evolution as an architect and his distinct and innovative style. This is the first project he built that is authentically Gaudi through and through. It contains fully-formed ideas that would be revisited time and time again on his other projects. But it also features elements that would be fine-tuned and perfected over his years of activity. A visit to Casa Vicens is an opportunity to witness the first steps in what would become one of the most celebrated architectural journeys of all time. 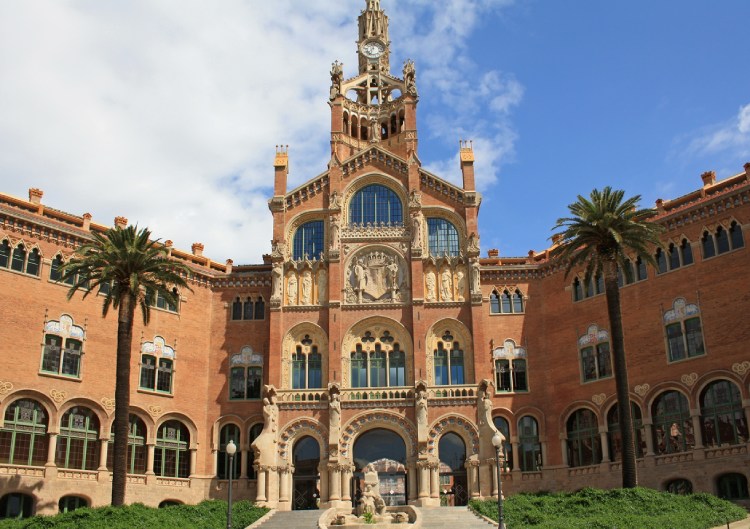 Of course, Gaudi may have been Barcelona’s most famous architect, but he wasn’t the city’s only architect. Lluís Domènech i Montaner is also known for his stunning Modernist works, including the Sant Pau Recinte Modernista, formerly Barcelona’s Hospital of the Holy Cross. This complex, built between 1901 and 1930 in the Art Nouveau style, comprises 12 pavilions connected through underground galleries. If this sounds large, that’s because it is. In fact, it’s the most extensive complex ever constructed in the Art Nouveau style.

Until 2009, this complex was a fully functioning hospital. However, when a new hospital opened next door, the complex was converted into a multi-use space that includes a museum and cultural center. This conversion and restoration took several years. Even though the space opened its doors to visitors in 2014, work remains ongoing. Of particular note, within the cultural center, you can explore a historical archive of remarkable occurrences related to the hospital and the city of Barcelona.

Both Casa Vicens and Sant Pau Recinte Modernista are on the itinerary when you join us on the Hidden Gems of Modernism shore excursion. We’ll dive deep into these two properties, visit Sagrada Familia (how could we not!?), and touch on Illa de la Discòrdia, Cases Antoni Rocamora, and Casa Bonaventura in Passeig de Gracia.

Explore our upcoming cruises to Barcelona.

L’Oceanogràfic has been making waves in Valencia since it was designed by Félix Candela in 1997 — and not just because its distinct hyperbolic parabola shape is reminiscent of the movement of water. This oceanarium is the largest of its kind in Europe. Spanning 1,200,000 square feet and holding 11,000,000 gallons of water, L’Oceanogràfic is home to 500 different species of marine life, including sharks, dolphins, whales, sea lions, penguins, and more.

A visit here offers an opportunity to get up close and personal with different marine ecosystems and the animals that inhabit them. And when we say “up close and personal”, we mean it. L’Oceanogràfic is home to Europe’s longest underwater tunnel, where you can see sharks from a whole new perspective and even meet Europe’s only family of beluga whales. 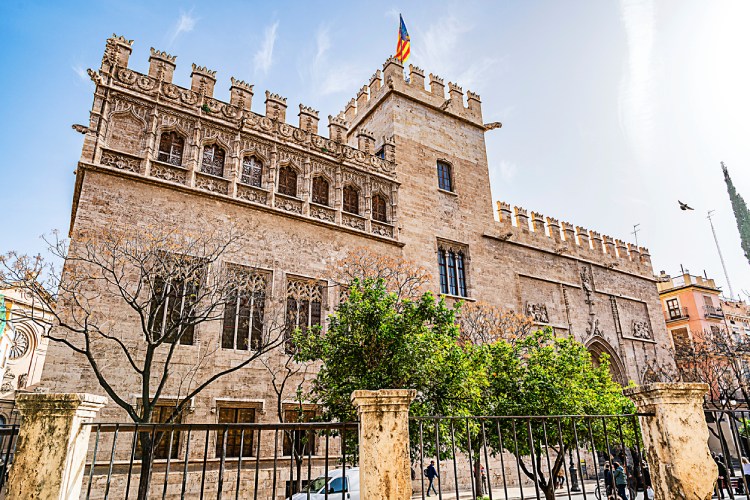 For a fascinating example of Gothic-style civic architecture in Valencia, don’t miss Lonja de la Seda, commonly known as the Silk Exchange. Built between 1482 and 1533, La Lonja originally served as the city’s silk and commodity exchange and today is a UNESCO World Heritage site. The building is highlighted by two main structures, the Sala de Contratación and the Consulado del Mar. Between the two buildings, you’ll find a lush orange garden. La Lonja was built by Pere Compte, who completed the project in just 15 years. 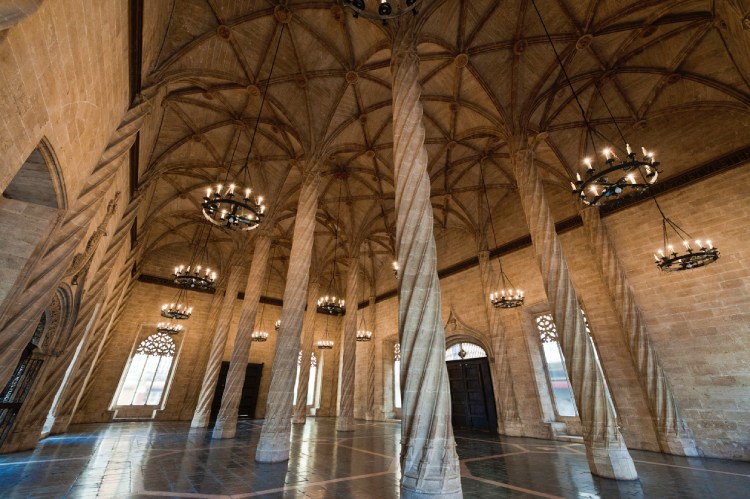 Keen-eyed visitors will notice an inscription that runs along the walls of the Trading Hall in a blue band. In Latin, it reads:

Roughly translated, this text serves as a welcome to traders and establishes the value of good, honest trade within the building.

Explore our upcoming cruises to Valencia.

Cathedral of Saint Mary of the Sea 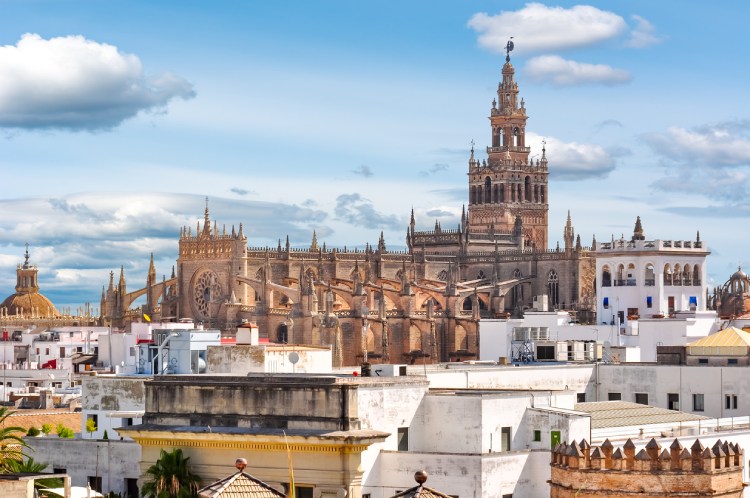 La Sagrada Familia isn’t the only impressive church in Spain. Just take one look at the Cathedral of Saint Mary of the Sea — better known as the Seville Cathedral — for proof of that. This Roman Catholic cathedral is the fourth-largest church in the world, and the largest designed in the Gothic tradition.

Much like La Sagrada Familia, construction on the Cathedral of Saint Mary of the Sea was a slow process. While the church had its groundbreaking in 1401 on the site of the Almohad Mosque, construction wasn’t completed until 1528. That note about the Almohad Mosque is important to remember; when you visit the cathedral, take a moment to note the intricate bell tower called the Giralda. At one point in time, it was the Almohad Mosque’s minaret and dates back nearly 1000 years. Stepping inside the church, you’ll discover the longest nave of any Spanish cathedral. Here, notice the impressive boxlike choir loft that fills the central portion of the nave and the intricate gold altarpiece carved in a Gothic retablo style. Featuring more than 1000 wood-carved biblical figures depicting scenes from the life of Christ, the altarpiece is the work of Spanish sculptor Pierre Dancart. He dedicated 10 years of his life to completing the project, and upon his death, other sculptors worked on the project for 70 years before its completion in 1564. 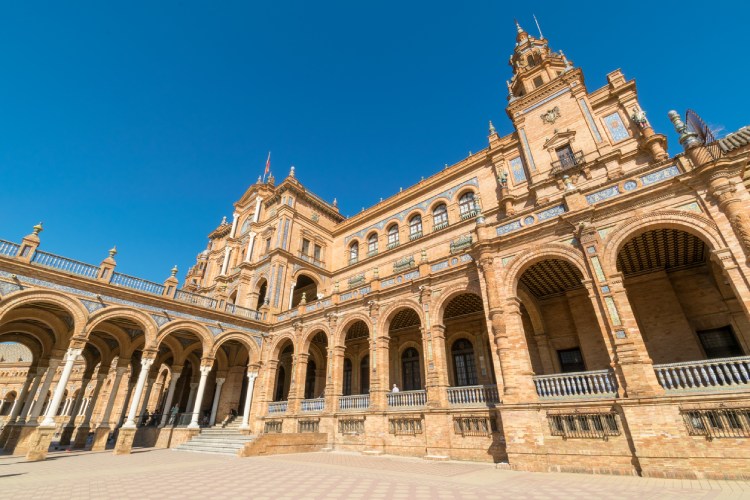 Constructed in 1928 for the Ibero-American Exposition of 1929, Seville’s Plaza de España is a perfect example of Regionalism (architecture conceived with the context and customs of a particular region in mind). In this case, the Plaza de España mixes elements of three major movements of Spanish architecture, Baroque Revival, Renaissance Revival, and Moorish Revival — with Art Deco elements included for good measure.

The building was designed by Aníbal González, and showcased Spain’s industry and technology exhibits during the Ibero-American Exposition. Around the plaza, you’ll find tiled alcoves, each representing a different Spanish province. These alcoves have become a popular spot to snap photographs, especially if you have ties to a specific province.

You know we’re movie lovers here at Azamara, so we can’t mention Plaza de España without noting its history as a shooting location for some of the biggest films of all time, including Lawrence of Arabia and Star Wars: Episode II - Attack of the Clones.

Explore our upcoming cruises to Seville. 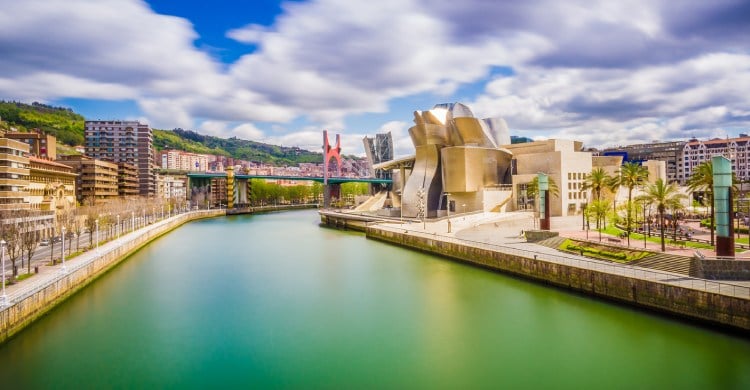 When it comes to contemporary architecture, few buildings exist on the level of the Guggenheim Museum in Bilbao. Conceived by the iconic Frank Gehry, the museum was heralded as one of the most important works completed since 1980 by architecture experts in the 2010 World Architecture Survey. It’s also been called “A masterpiece of the 20th century”, “The greatest building of our time”, and “An astonishing architectural feat”. And with one look, it’s easy to see why. Gehry was encouraged to design something bold and daring when planning the museum. The result almost feels like a random assortment of curves and dips. Many call it the world’s most spectacular example of Deconstructivism. It’s worth noting, however, that Gehry does not associate himself with this particular movement. The reality is that each curve on the exterior serves a purpose — catching and projecting the light. Inside, the shape of the atrium has earned it the nickname “The Flower”.

Speaking of inside the Guggenheim, the museum is known for hosting “large-scale, site-specific works and installations by contemporary artists.” There is only one permanent exhibit here, Richard Serra’s The Matter of Time, which consists of eight weathering steel sculptures. You can learn all about this exhibit and its history while also getting an inside look at the museum when you join our Guggenheim With An Art Aficionado shore excursion. During this tour, a local art expert will provide details you might have missed, all while exploring the history of this incredible museum and the works on display inside.

Explore our upcoming cruises to Bilbao.

Set Sail for the Architectural Wonders of Spain

From ancient beauties to modern masterpieces, the architecture of Spain is unmistakable. Start planning your cruise to Spain with us today, and, more importantly, be sure to make your list of can’t-miss architecture to visit while you’re there.

Get started by exploring our upcoming cruises to Spain.