Why a Spice Route Cruise Should Be Your Next Vacation

They say variety is the spice of life, and it’s certainly true when it comes to a cruise along the legendary Spice Route. Connecting Europe, Africa, and Asia, the Spice Route certainly offers plenty of variety across its ports. There are lush, green rainforests teeming with wildlife, dusty, pink desert rock with ancient tales to tell, and everything in between — all waiting for you.

Thinking of spicing it up and taking a cruise along a spice route? Here are seven ways a spice route cruise is guaranteed to add a little flavor to your fantastic voyage.

Browse your spice rack at home, or flip through menus at your local restaurant and discover the spices and herbs that bring life to your meals. Naturally, what better way to taste these fresh flavors than right from the source, on a spice route cruise. 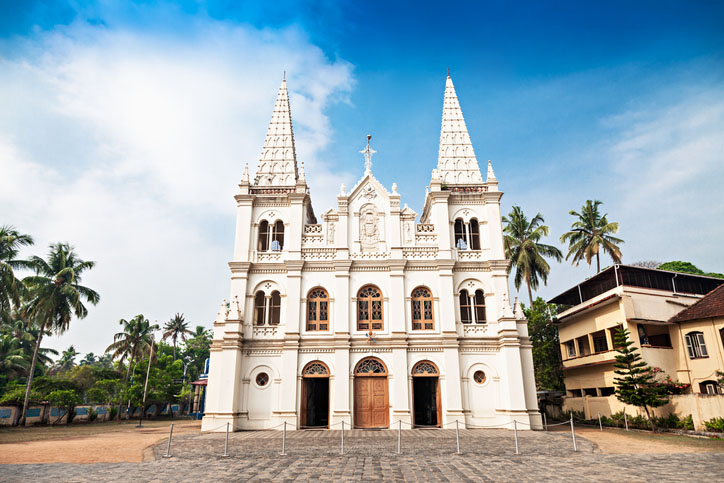 Cochin, India brings together a mixture of cultures and influences from all over the world. Here, Portuguese-style homes and crumbling remains of the British Raj are found in a city with a 400-year-old synagogue, ancient mosques, and giant fishing nets from China. It’s a reminder that this city was once a central location for the Indian spice trade, bringing together merchants from all over the world.

The land of pyramids has an ancient history, with culinary cues from the past influencing the memorable meals made in Egypt today. The Mediterranean is known for the popular falafel, but the Egyptian variation belongs in a class of its own. Known as ta’meya, instead of chickpeas, it has crushed fava beans as a base then is brought to life with a mixture of fresh herbs and spices. This Egyptian falafel is just as at home on a food cart in Luxor or at a sit-down restaurant.

In Colombo, sip on Ceylon tea, made from the dried and processed leaves of the tea plant found in the highlands of Sri Lanka. The origins of this tea’s name can be traced back to Sri Lanka’s former name — Ceylon — when it was a British colony. 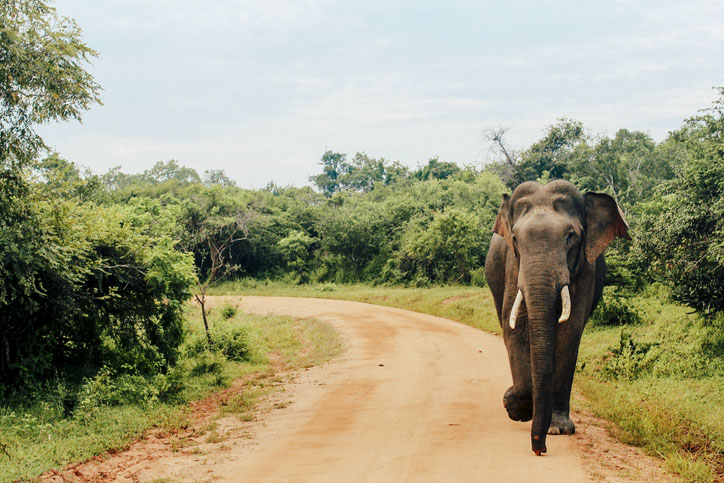 The stunning Yala National Park in Hambantota, Sri Lanka, is like The Jungle Book brought to life. The world’s largest concentration of leopards and elephants calls this park home, making it just one of the many reasons Sri Lanka is considered a biodiversity hotspot. To be considered a biodiversity hotspot, the region must have two things. First, it must have at least 1,500 vascular plants as endemics, which means they are plants you won’t find anywhere else in the world. Second, it must have 30% or less of its original natural vegetation, meaning it’s threatened.

This designation helps protect Yala National Park and the 44 mammal species and 215 bird species that call this area home. Here, you’ll find magnificent elephants and exotic birds of prey that you can observe from afar. This means you won’t disrupt their home but can still capture a photograph of a beautiful area you’ll never forget. 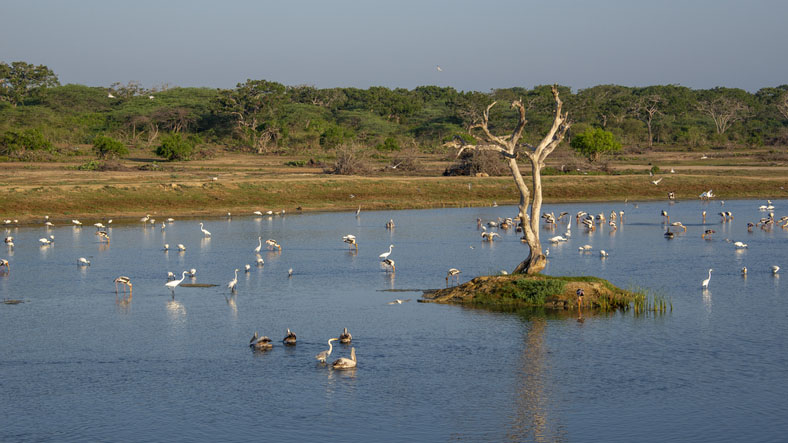 Bundala National Park, also near Hambantota, is a popular destination for both human travelers and migratory birds, such as fabulous flocks of flamingos. This biosphere reserve hosts around 15,000 shorebirds between August and April. Keep your eyes open for the 149 different bird species that you can see here.

3. Step Back in Time 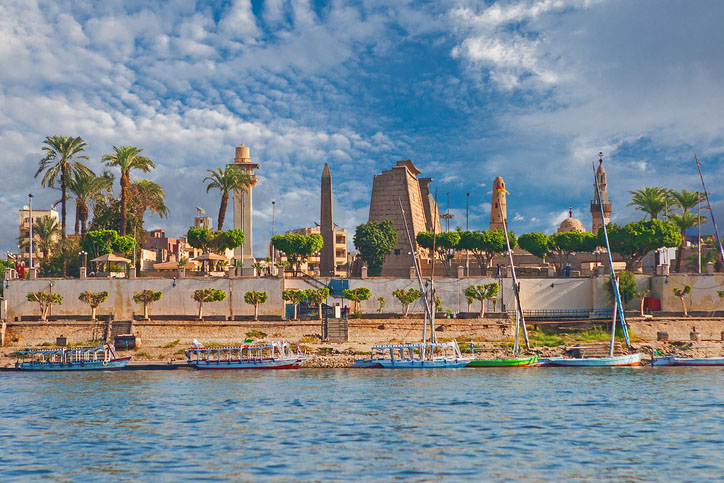 Trade the lush landscapes of Sri Lanka for the sandy surroundings of ancient Egypt in Luxor. This city is known as “the world’s greatest open-air museum,” and there’s no shortage of attractions from the past to explore in the land where powerful pharaohs once ruled. At the heart of the city is the Luxor Temple, home of two massive seated statues of Rames II, just one of the rulers who ordered work on this fantastic temple. 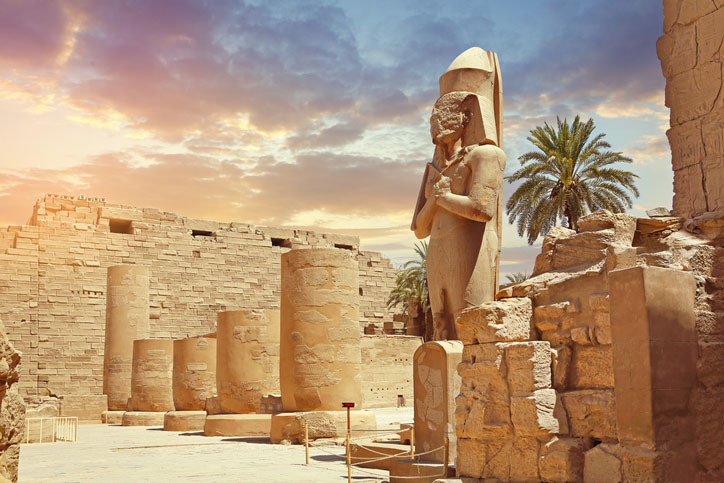 Further down the Nile river, find the vast temple complex of Karnak, first built over 4,000 years ago. Each ruler in the area, over 2,000 years, added new elements to Karnak. Take a leisurely stroll down the Avenue of Sphinxes, with ram-headed statues lining both sides of this grand pathway. See The Great Hypostyle Hall and the 134 papyrus columns that once held up the roof of this extravagant building. Or marvel at the obelisk by Queen Hapshetusut, with one of the twin structures still standing.

Cross the famous Nile river and discover the Valley of the Kings, where the past Egyptian civilization took their elaborate structures underground with tombs. Here pharaohs, queens, high priests, and other vital members of this society were prepared for a passage to the afterlife through mummification. There are at least 65 tombs here, including the final resting place of King Tutankhamun.

4. Discover the Remnants of Past Civilizations 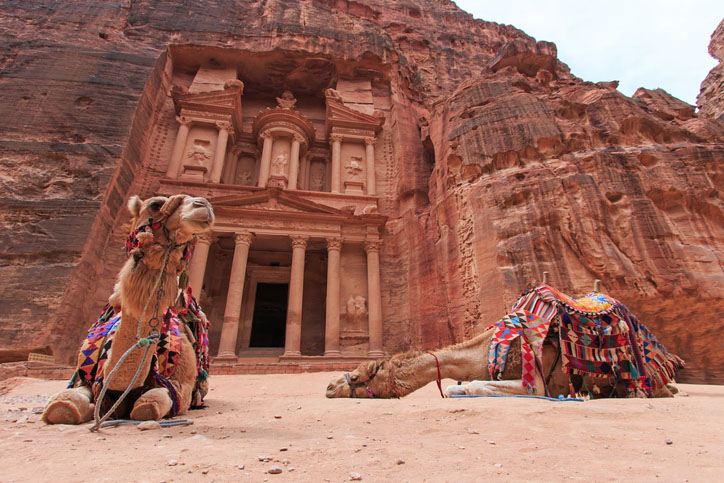 The Egyptians weren’t the only ones who created intricate and hidden architectural feats. In Jordan, the ancient caravan city of Petra was constructed and carved into dusty pink rock by the Nabateans over 2,000 years ago. Located between the Red Sea and the Dead Sea, Petra was an important hub that brought together different cultures to trade the spices of India, the silks of China, and the incense of Arabia. 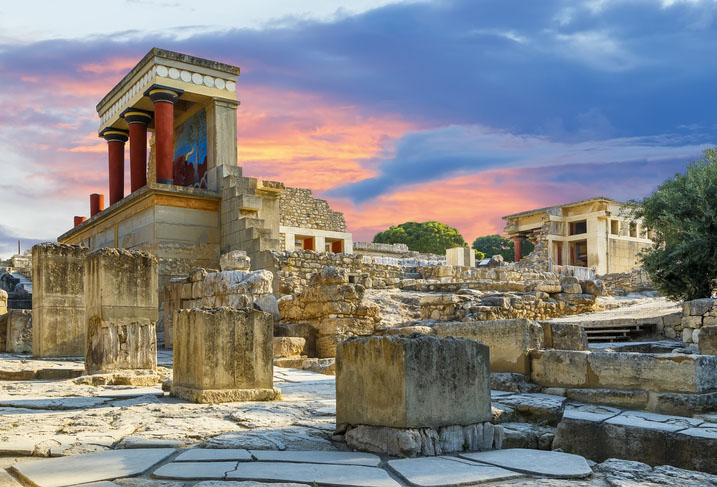 Discover Europe’s oldest city on the island of Crete, just outside of Heraklion, Greece. Knossos was the center of the Minoan civilization, with the first Neolithic settlements here dating back to 7000 BC. Step back in time as you explore the palace, home of the legendary King Minos and its mythical Minotaur.

Jerusalem holds special meaning to people of many faiths and philosophies. Some of the most significant moments in history have happened here, making a visit to the sacred sites of the holy city of Jerusalem is a genuinely moving experience you won’t experience anywhere else. 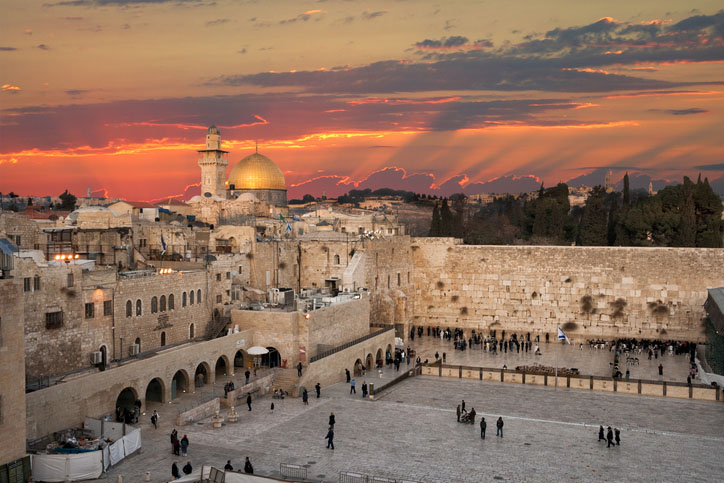 The Western Wall, also known as the Wailing Wall, is a place of prayer and a sacred pilgrimage site for the Jewish people. It’s a few steps away from the Temple Mount, a place with special meaning for Jewish, Muslim, and Christian people. It’s where you’ll see the exquisite Islamic shrine, Dome of the Rock, with its gold-plated roof. It’s also close to many biblical landmarks, including the Garden of Gethsemane and the Church of the Nativity in Bethlehem. 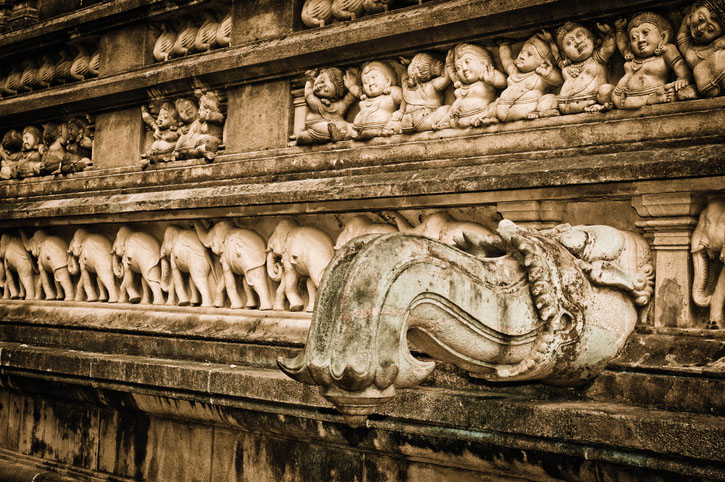 The spice route is full of important sacred sites from start to finish. An hour away from Cochin, India, you’ll find the temple town of Vaikom. The oldest temple in Kerala is here, Vaikom Sree Mahadeva Temple, dedicated to the Hindu god Shiva. One of the main pilgrim areas in the south of India, this site is one of the few temples held in reverence both by Shaivaites and the Vaishnavaites.

In Colombo, Sri Lanka, marvel at Kelaniya Temple, a site visited by Buddha. For an adventure outside Colombo’s city limits and deeper into Sri Lanka, travel to the Temple of the Tooth. With a distinctive gold roof, this UNESCO World Heritage site holds one of the most important relics in the country, a tooth belonging to Buddha that’s safely stored in a gold casket.

7. Relax on the Water

On an immersive Azamara voyage, opportunities abound to experience the water from a different perspective. In Egypt, have a blissful beach day on the shores of the Red Sea Riviera. Feel the gentle sea breeze with the perfectly soft sand between your toes just before a dip in the welcoming waters. Or relax on a private beach in Aqaba, complete with stunning views of the Red Sea and the mountains nearby. 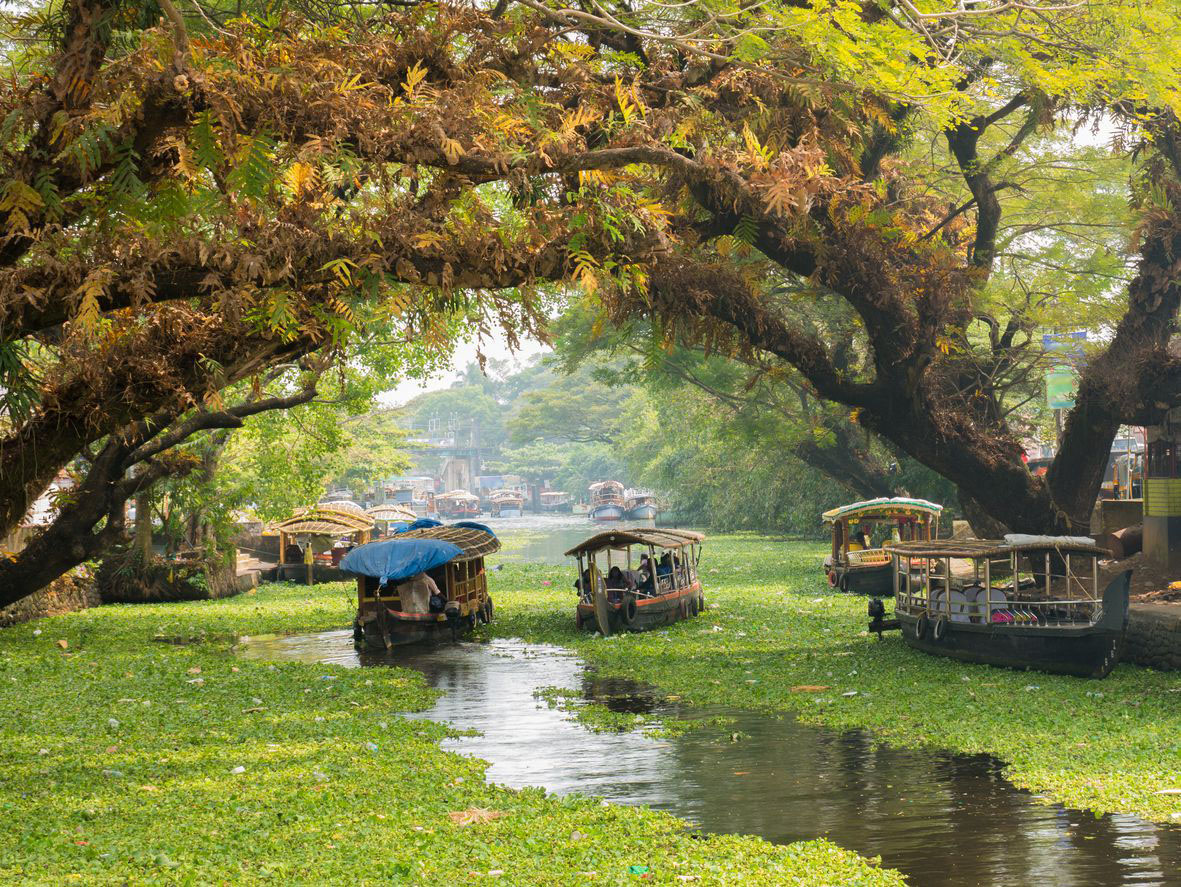 Explore the backwaters of Alappuzha near Cochin, India, a town surrounded by a network of canals and lagoons. Hop onboard a kettuvallam, a traditional wooden houseboat, and take in the panoramic views that offer a unique glimpse into the local life of this region.

Spice Things up With a Spice Route Adventure

Ready to delight your senses with the sights, sounds, tastes, and smells of a spice route cruise? Learn more about our exciting upcoming journey.

There's no place quite like Northern Europe. Castles tower over rolling hills. Folklore captivates in a way that brings new life to centuries-old. And the...