Azamara World Voyage 2024: The Wonders of the World

The Seven Wonders of the World are extraordinary. They encapsulate so much of the magic, the ingenuity, and, well, the wonder of not just the human imagination, but also the human spirit’s innate drive to leave a lasting impression. Of course, it’s not every day you get to visit one of the New Seven Wonders of the World. But you’ll have the opportunity to see each of them on our incredible upcoming World Voyage. That’s right, all Seven Wonders in one trip — from the Mayan ruins of Chichen Itza in Mexico to the ancient gladiator grounds of the Colosseum in Rome. You’ll walk through timeless monuments and iconic UNESCO World Heritage Sites that have inspired awe and wonder for centuries.

Let’s take a closer look at the Seven Wonders of the World — and all that awaits you — when you join us on our upcoming World Voyage. 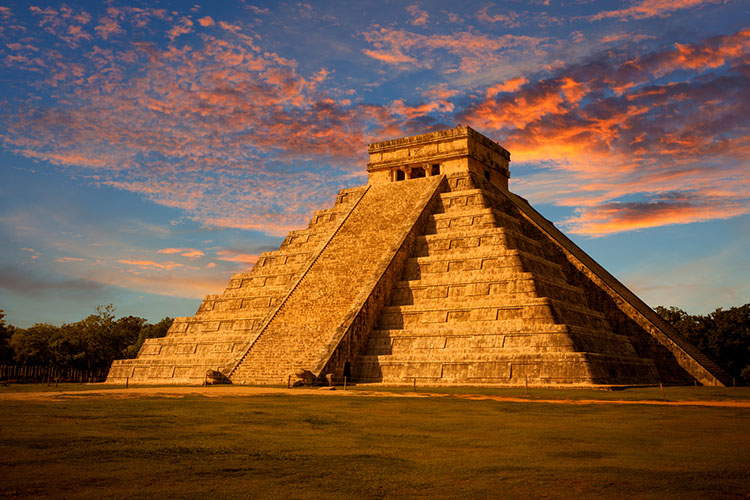 The site of one of both the largest and most notable of all Mayan cities, the ruins of Chichen Itza offer a glimpse into the life of an ancient civilization. This city was the central location for the Mayans from 750 to 1200 AD, and is full of pyramids, temples, a ball court, and other ancient structures.

Astronomy was important to this civilization, and there’s no better way to see this than at the Temple of Kukulkan or El Castillo. This stunning pyramid features 91 steps on each of its four sides and a top platform. All told, there are 365 steps — each one represents a day in the calendar this civilization developed. Not only that, but it was built so the shadows from the sun make it look like a serpent is slithering down the stairs throughout the day. Elsewhere, find remains of observatory structures at the Temple of Warriors, where Mayan priests calculated when solar eclipses and other celestial events would happen long before the dawn of technology.

On your journey, you’ll enjoy a scenic 40-minute flight from Cozumel, Mexico over Caribbean waters and the tropical jungle of the Mayan Riviera before arriving at these ancient ruins. Once standing in the shadows of Chichén Itzá, you’ll learn all about life for the Mayan people through captivating stories from your tour guide. 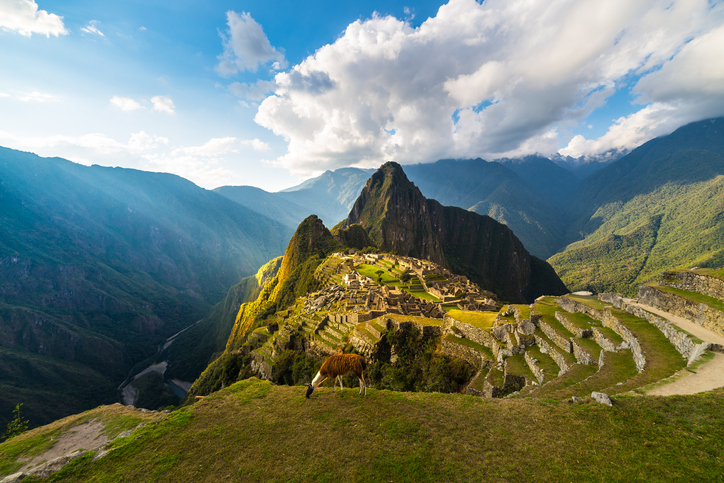 Nestled on a mountain ridge in the Peruvian Andes Mountains, 7,970 feet above sea level, lies the must-see Incan Citadel. The heart of Machu Picchu, La Ciudadela, was built around 1420 for Incan Emperor Pachacuti until the site was abandoned during the Spanish conquest around 1530. The Incans were known for their masonry. They created the 150 structures of this city — everything from hillside houses to intricate temples — using a method called ashlar, where stones are precisely cut and fit together without mortar. The result is magnificent architecture throughout a place where religious, ceremonial, astronomical, and agricultural pursuits all co-existed in one Incan city.

The Historic Sanctuary was only known locally until 1911, when a professor from Yale University re-discovered what is now the best-known archaeological site in South America. While most Incan cities were destroyed during the Spanish conquest, Machu Picchu remains well-preserved thanks to its remote location.

On the World Voyage, you’ll experience this archaeological gem with an in-depth guided tour of Machu Picchu. Then, visit the Sacred Valley further below in the foothills of the Andes, before exploring Cusco, the former capital of the Inca Empire. 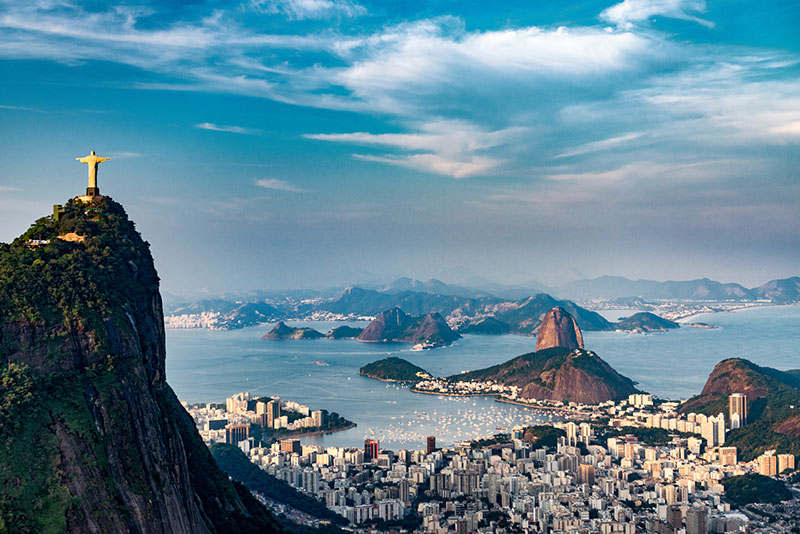 This Art Deco statue of Jesus Christ stands with arms outstretched high above Rio de Janeiro, Brazil. Completed in 1931, this wonder is 98 feet tall — nearly 125 feet including the pedestal — and has an arm span of 92 feet. This important cultural symbol of Brazil stands atop Mount Corcovado, 2,310 feet above the city below. Don’t worry, there are escalators and elevators that take you to the top of this mountain.

The initial idea for a Christian monument on the mountain came in the 1850s, but it wasn’t until the early 1920s when a statue of Christ was first proposed. A collaboration between French sculptor Paul Landowski and Brazilian engineer Heitor da Silva Costa, this statue took five years to complete. It’s crafted of reinforced concrete and thousands of soapstone tiles.

On the World Voyage, fly from Lima, Peru to Rio de Janeiro, Brazil, for a chance to fully explore this famous seaside city. Witness the wonder of Christ the Redeemer, ride a cable car to the summit of Sugarloaf Mountain, relax on the famous Copacabana or Ipanema beaches, and get a first-hand look at Carnival in Rio de Janeiro, complete with Samba dancing.

The Great Wall of China 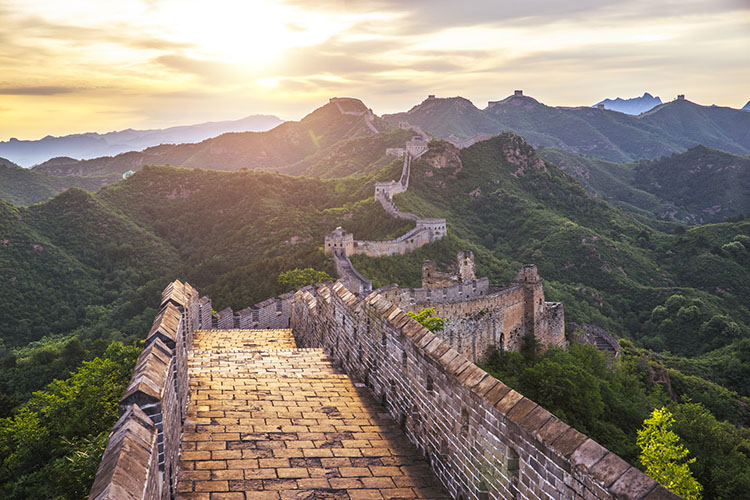 The idea that you can see the Great Wall of China from outer space may be a myth, but the 13,171 mile-long fortification is an out-of-this-world marvel. One of the most remarkable construction projects on Earth doesn’t just happen overnight. In fact, the Great Wall of China is a series of walls built across two millennia, stretching from the Bo Hai Sea to the Gobi Desert. The earliest parts were constructed in the 7th-century BC. However, it wasn’t until the Ming Dynasty, which spanned from 1368-1644, that the most iconic parts of the Great Wall were finished.

The World Voyage gives you a chance to visit the Great Wall, just one of the country’s treasures, with three nights in the Chinese capital city of Beijing. See the Forbidden City, take a guided visit to Tiananmen Square, taste a Peking duck dinner, and more. 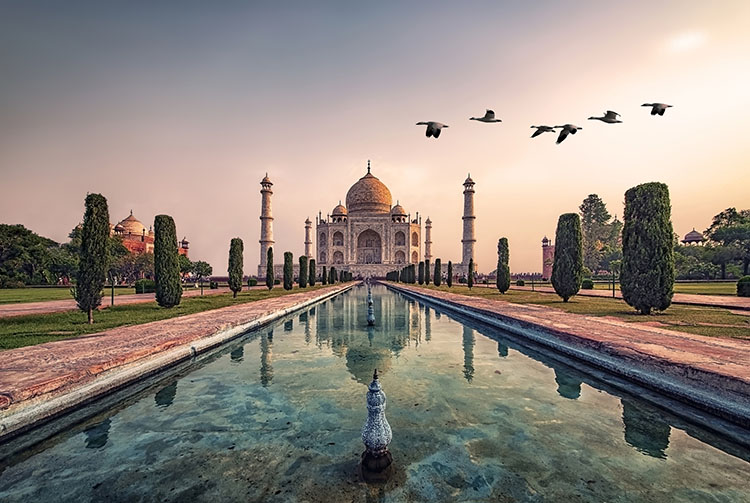 A white marble masterpiece of Indo-Islamic architecture, the Taj Mahal is a universally recognized icon visited by over 8 million people each year. Construction began in 1632 when Mughal Emperor Shah Jahan built this magnificent jewel as a mausoleum for his wife, Mumtaz Mahal. The monument took 22 years and 22,000 people to complete — including laborers, artists, stonecutters, dome builders, carvers, and calligraphers. Oh, and more than 1,000 elephants helped to move materials brought in from India, Persia, the Ottoman Empire, and as far as Europe. More than just a tomb, the Taj Mahal includes twin mosque buildings, stunning natural gardens quartered by pools, fountains, walking paths, and a museum.

Take in the domes and arches of the Taj Mahal during the World Voyage and see how the structure changes color based on where the sun is. We’ll also bring you to other landmarks in Agra, including Agra Fort and Itmad-ud-Daulah — sometimes called Bachcha Taj, which translates to Baby Taj. 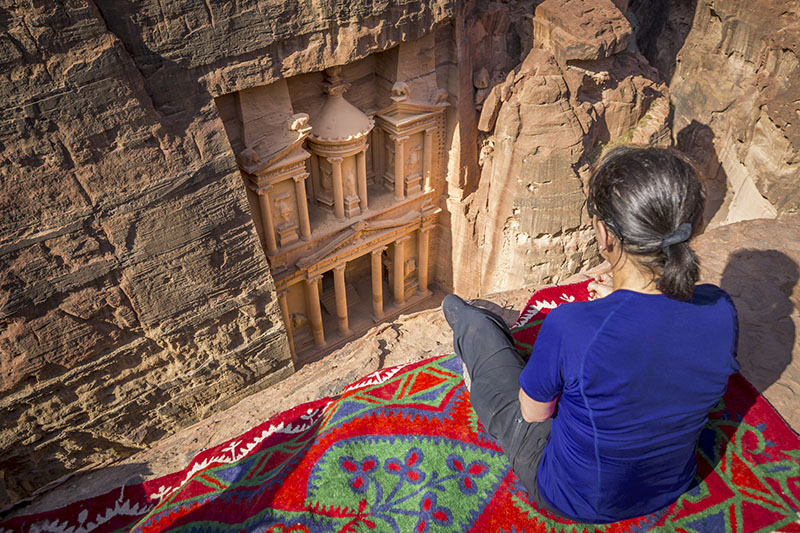 Known as the Red Rose City, Petra has historically served as a hub for trading in the ancient world. The incense of Arabia, silks from China, and India’s spice would all come through this city, half-built and half-carved into the mountains. Situated between the Dead Sea and the Red Sea, the area has been inhabited since 7,000 BC by the Nabataeans. The rock-cut capital city was built by the nomadic Arabs in the 3rd-Century BC. While its distinctive rose-colored carved sandstone architecture grabs attention, it’s also known for its sophisticated water collection system. In fact, this system allowed societies to thrive in the dry desert and mountains of the area in present-day Jordan.

Along with the water system, Petra features elaborate tombs and temples. Over the years, Petra was ruled by the Roman Empire, then the Byzantines, and eventually was abandoned in the 8th-century AD, when its culture and commercial significance faded.

During the World Voyage, journey into the desert to visit this mysterious city. Starting at the Siq, or main entrance of Petra, hike through the Rose Red City and stop at landmarks including the Greek Theatre, the Temple of Qasr Al-Bint, Colonnaded Street, the ancient Royal Tombs, the Treasury, and more. 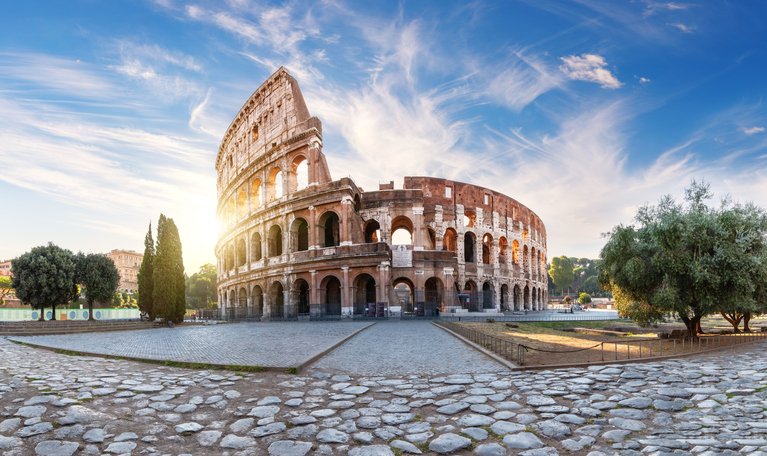 The Colosseum is easily the most famous amphitheater in Rome — and perhaps the world. Known for its gladiator games, it was built by the Flavian emperors as a gift to the Roman people. Construction began under Emperor Vespasian between 70-72 AD and was completed about a decade later. The official opening by Vespasian’s son Titus included 100 days of games, which meant a lot of gladiator fights.

This stunning amphitheater was the largest built by the Romans, capable of seating 50,000 spectators. Most other amphitheaters were built into the ground, but this colossal structure was freestanding. It featured three distinctive levels, each with a different type of column, for a total of 80 semi-circular columns. Eventually, gladiator fights ended, the Colosseum was damaged by earthquakes and lightning, and this once-glorious amphitheater was abandoned. In fact, at one time, it was used as a quarry to build other projects throughout the Roman Empire.

On the final segment of the World Voyage, we’ll takes you to the times of gladiatorial glory with a chance to step into the Colosseum and marvel at the architecture and engineering of this building, all while a local guide shares stories of this 2000-year-old wonder. 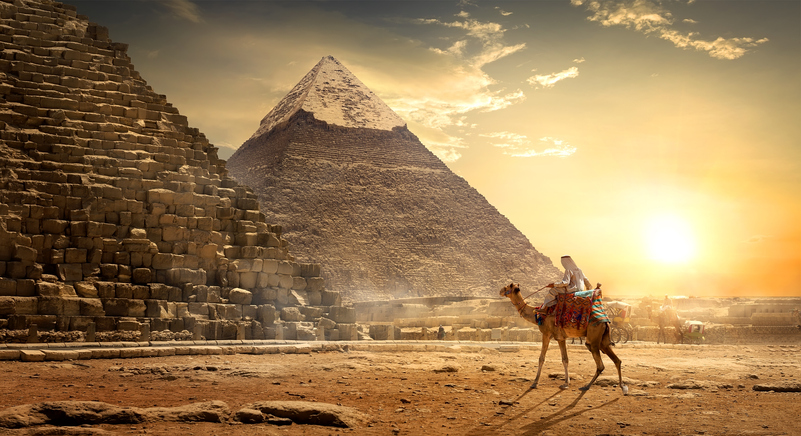 While the Great Pyramids aren’t one of the New Seven Wonders of the World, they are the only one of the Seven Wonders of the Ancient World still standing. So we couldn’t miss the chance to take you to these ancient Egyptian icons on the World Voyage. Travel to the Giza Plateau and explore the pyramids, the mysterious Sphinx, the Grand Egyptian Museum, and cruise down the Nile.

We can’t wait for you to experience the Seven Wonders of the World with an unforgettable World Voyage. So, start planning your cruise and get ready for the most AzAmazing adventure.

Learn more about the World Voyage.

Have you visited the Seven Wonders of the Ancient World? On my last voyage with Azamara®, we toured one of the Wonders, The Temple of Artemis. I loved it....

7 Wonders of the New World with Azamara

Built on four continents, most by ancient and medieval empires, the 7 Wonders of the New World are architecture marvels that must be seen to be believed....