From foie gras to boeuf bourguignon, and all kinds of delicious pastries in between, France is world-renowned for its delicious food. It is, after all, the country that coined the term ‘Haute Cuisine’. Producing over eight billion bottles of wine a year­ — from Champagne and fifteen other wine regions — France is also home to some of the world’s best wines. Study up on our guide to French food and wine, and on your next Azamara voyage to France, you’ll dine comme un rois (like a king).

In Part One, we’ll explore the incredible food and wine of Northern France.

The Food and Wine of Northern France

Along the French northern coast sit the regions of Brittany and Normandy — each with their own signature flavors waiting for you to discover. Both cuisines feature bountiful arrays of fresh seafood, including langoustines, plump oysters and more. The next time you find yourself in Honfleur, St. Malo, Brest, Cherbourg, or Nantes, look for the following dishes and drinks. 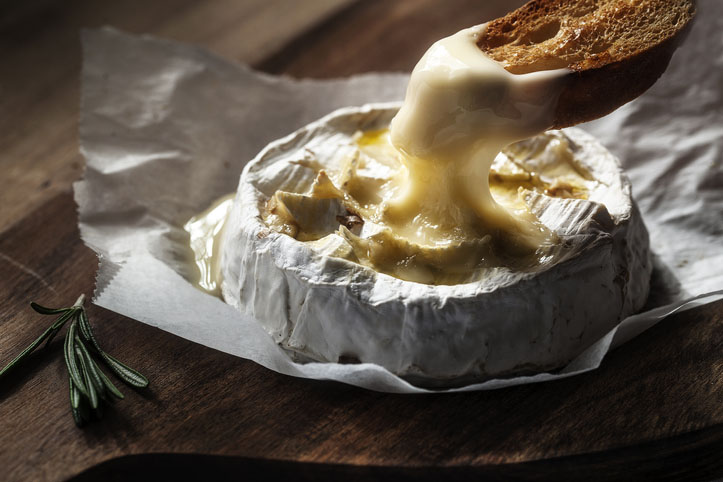 Camembert: This is a soft and creamy cow’s milk cheese from Normandy. Delicious at room temperature, it also becomes wonderfully soft when melted.

Cider: For many, the first food that comes to mind when thinking of France is grapes, but the north is home to another famous for another fruit — apples. That’s why here, instead of wine, locals produce cider. Apples are fermented to offer a delicious and slightly fizzy cider drink. Just like wine, you can find both dry and sweet types of cider. Normandy is also known for Calvados, a strong apple brandy. Try a tipple as a digestive. 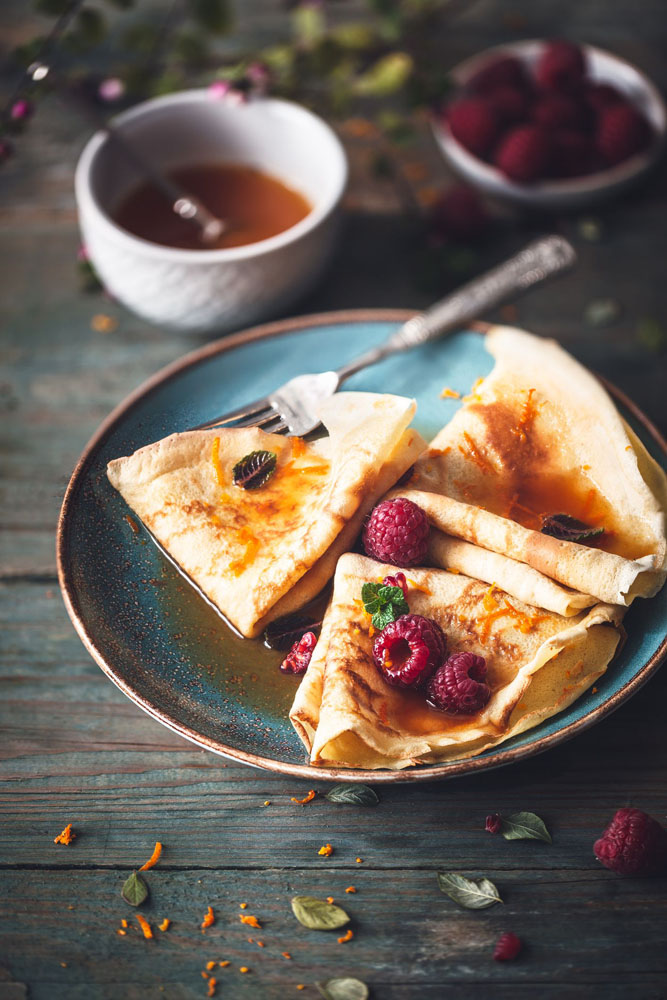 Crêpes: Brittany is home to some of the best crêpes in France, which puts them high in the running for best crêpes on Earth. In France, savory crêpes are called galettes. They’re made with buckwheat, a grain grown in the region, and often feature ham and cheese as classic fillings. But on menus across the region, you’ll also find galettes filled with eggs, seafood, or vegetables. For dessert, sweet crêpes are made with flour. Popular fillings include lemon, sugar, and Nutella. Then, of course, there’s the classic Crêpes Suzette, where the crepes are flambéed in a caramelized sauce of sugar, orange juice, and orange liquor. Simply put, when traveling through Northern France, don’t miss your opportunity to sample these different styles of crêpes. Try them all paired with cider on our Sant-Malo On Foot & Crêpes shore excursion. 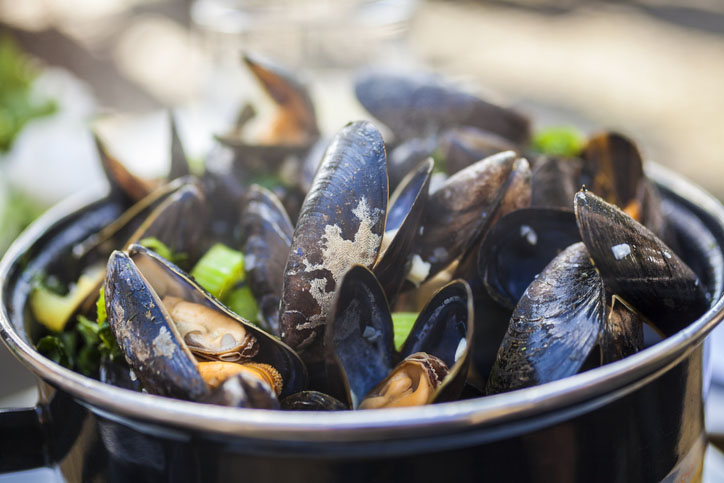 Moules Marinières: In this classic dish from Brittany, fresh-from-the-sea mussels are gently steamed in a mixture of garlic, shallots, leeks, cider or white wine, and sometimes a little mayonnaise. Neighboring Normandy has a similar dish, moules a la Normande, where instead of mayonnaise, double or heavy cream is added, making the dish extra indulgent. With either version, make sure to ask for a crusty baguette to sop up the delicious sauce.

Kouign-Amann: You don’t judge a book by its cover, and you shouldn’t judge this pastry by its look. Admittedly plain in appearance, it’s what’s on the inside that counts for this delicious dessert. It’s made from yeasted dough folded with lots of butter and sugar to bake a dense yet flaky pastry that’s wonderfully caramelized from all of the sugar. Kouign-amann has been described as “The fattiest pastry in all of Europe”. Trust us when we tell you that is most certainly a compliment. 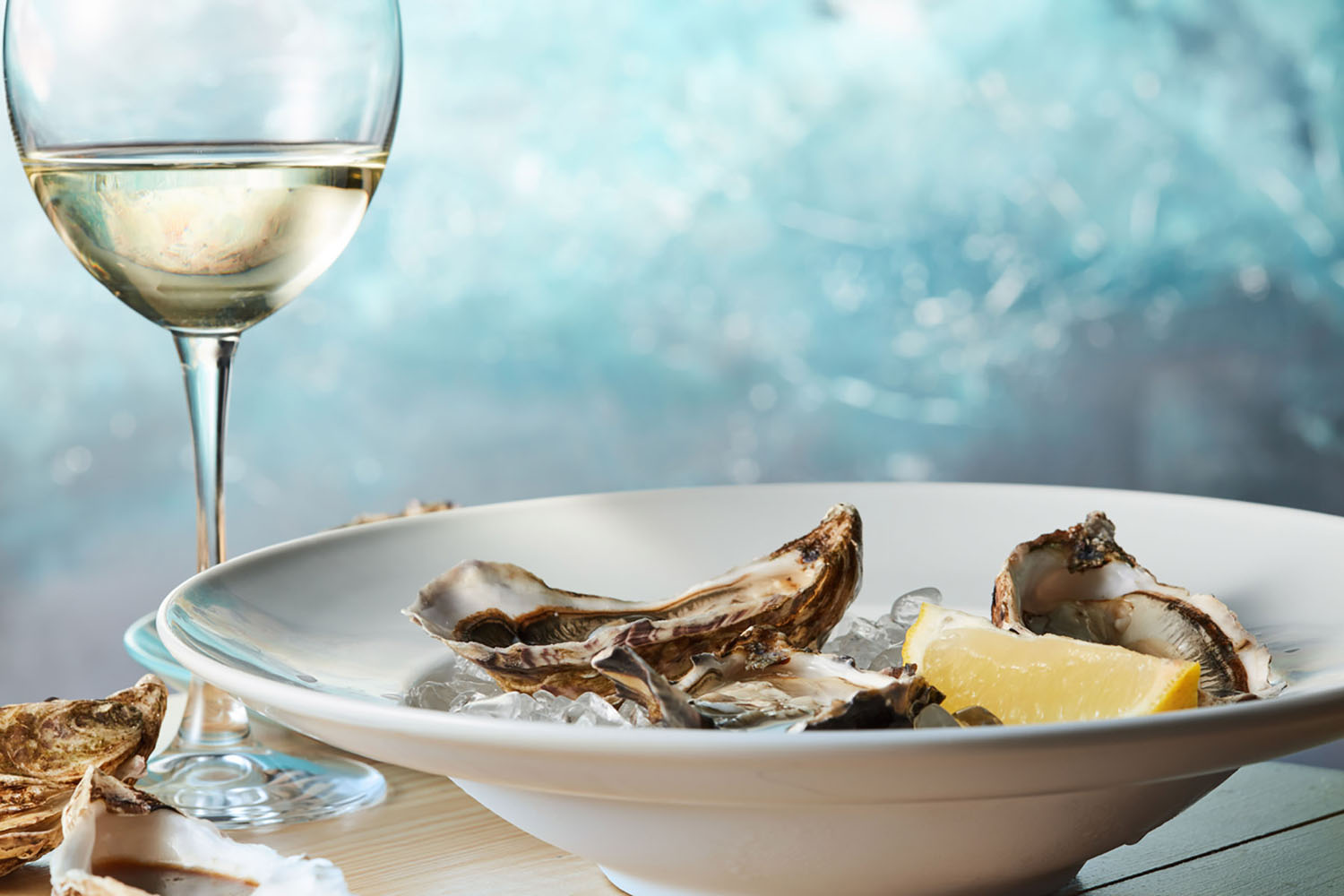 Oysters: You either love or hate these briny mollusks. For those who love them, Brittany is an oyster mecca, producing over 60,000 pounds of the delicacy every year. They are best enjoyed raw, with a squeeze of lemon and a splash of mignonette sauce. For the freshest and tastiest oysters, enjoy them in season — any month with an “r” in it (September–April).

Sables: From Sablé-sur-Sarthe in Normandy, sables are the French version of shortbreads. Delicious and buttery, these round cookies have a crumbly and sandy texture. 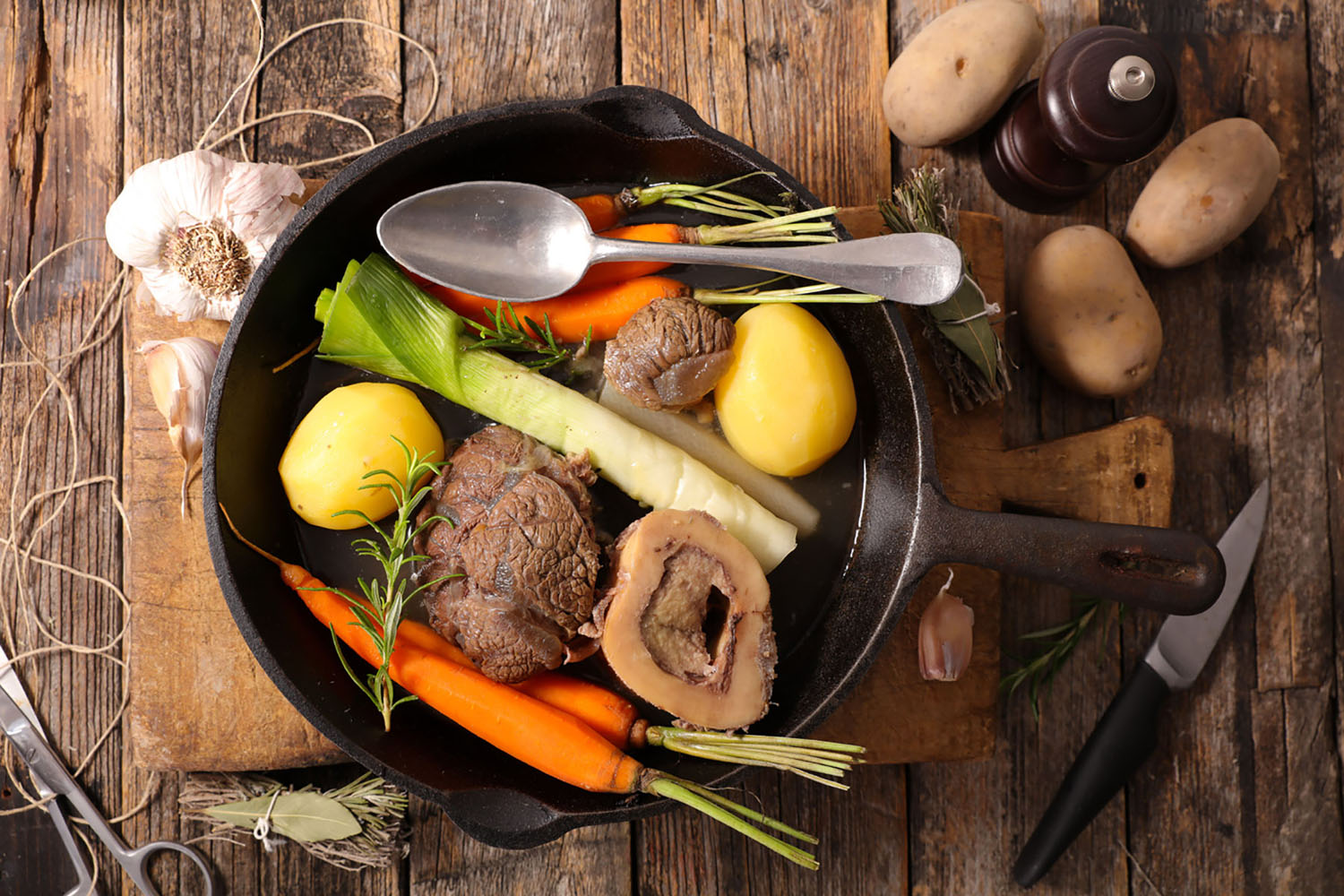 Pot-au-Feu: One of the ultimate comfort food dishes for the French, pot-au-feu is a hearty French beef stew, where cheap cuts of beef are braised for a long time with root vegetables. After a day exploring the D-Day beaches near Saint-Malo and Cherbourg, this is the perfect meal to way to end the day.

Fleur de Sel­: Salt may not be a French food per se, but we couldn’t talk about northern France without mentioning this prized sea salt. Harvested by hand from marsh basins, this salt has a unique shape, and the taste is said to linger longer — providing additional flavor and making a great finishing salt. Fleur de sel makes a great souvenir to keep in your kitchen or bring to loved ones. 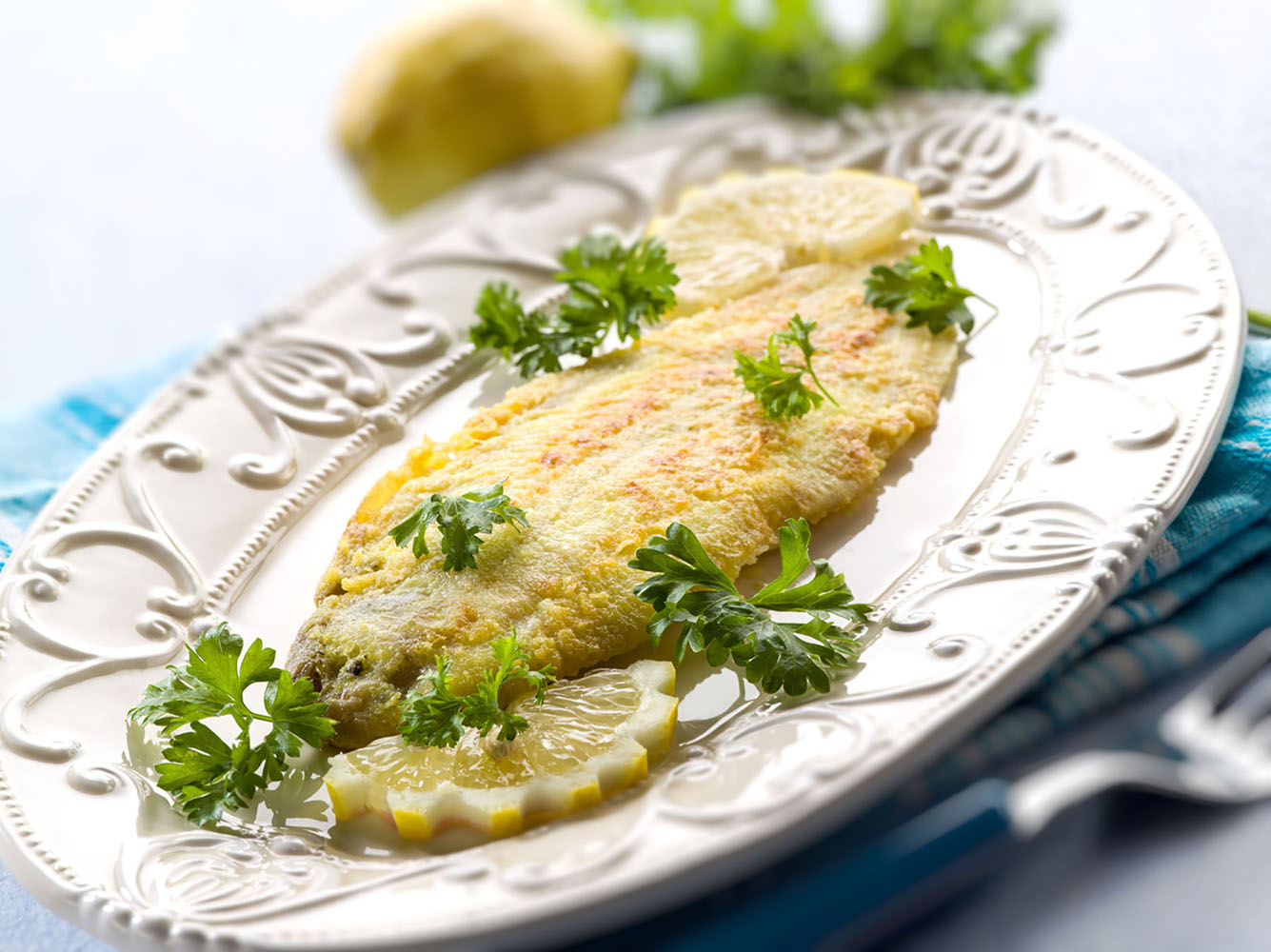 Sole Meunière: Whole sole (preferably Dover sole) is pan-fried in lots of butter and finished with lemon and parsley. When served at a restaurant, it’s deboned for you, tableside. Upon arriving in Rouen, Julia Child’s first taste of French food was sole meunière, and it sparked her lifelong love affair with the country’s cuisine. Order this dish on your next visit to France, and perhaps it will work its magic on you too.

If you’re ready to say “oui” to the journey of a lifetime, take a look at our upcoming voyages to France and discover the perfect itinerary for you.

Be sure to check back soon for part two of our Ultimate Guide to French Food & Wine. And for more travel inspiration, explore our guide to spending 36 hours in Paris.

This is a special guest post by travel writer Scott Eddy, who recently cruised as a guest of Azamara. Recently, I got to go on a 15-night expedition...

Seven Things to do in Croatia

In recent years, Croatia has transformed from a hidden gem of coastal delights to one of the hottest travel destinations in Europe. What makes this small...

Amsterdam is a place that everybody knows about but perhaps for the wrong reasons. Popular culture has tagged Amsterdam as the epicenter for legalized...