The Ultimate Guide to Arabian Cuisine

Cruising to the Arabian Gulf allows travelers to experience so much within a voyage. It's one of the most diverse regions in the world, home to desert sinkholes and towering skyscrapers, ancient souks and flashy shopping malls, luxury golf courses and Bedouin camps. This diversity extends beyond the region's cityscapes and rich history into its kitchens and restaurants. Simply put, Arabian cuisine's flavorful and fantastic recipes are more than enough to put this region on your menu of must-visit destinations.

And now, with this handy guide to local cuisine in your back pocket, you'll have the inside scoop on the foods to keep an eye out for when you cruise the Middle East and Arabian Gulf with us. 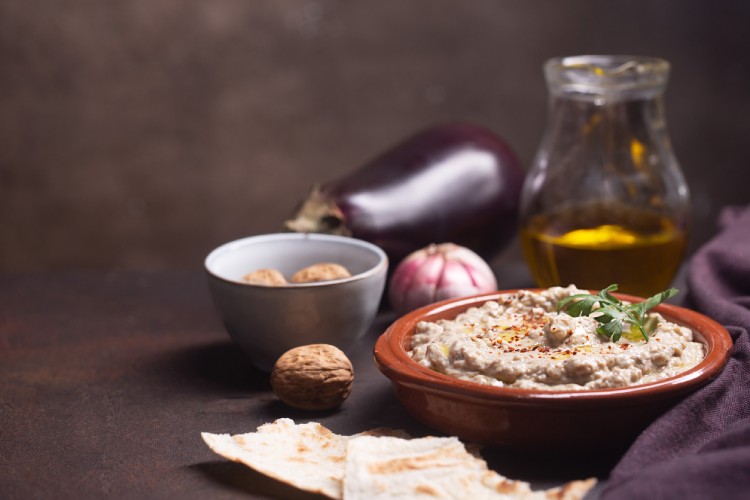 The Levant may not be the first word that comes to mind when you think of Arabian cuisine. After all, the Levant is not an Arabian country — or a country at all! Instead, Levant is a term used to historically describe a large area in the Eastern Mediterranean region of Western Asia. Today, countries like Syria, Jordan, Lebanon, Palestine, Israel, and Southern Turkey make up this region that serves as the land bridge connecting Africa and Eurasia. And this connection is one of the reasons this region, and the Levantine cuisine that emerged from it, is synonymous with Arabian cuisine. After all, the "crossroads of eastern Asia, the eastern Mediterranean, and northeast Asia" has seen many traders, explorers, and adventurers over the years. And each of them brought spices, recipes, and ingredients that changed the world's gastronomy forever.

Arabic dishes like hummus, falafel, and kebabs are popular worldwide and a staple of meals in the Middle East. These all come from Levantine cuisine, the traditional food of the Bilad ash-Sham region. The most distinctive aspect of Levantine cuisine is mezze, small dishes served at the beginning of a multi-course meal.

It's important to note that, though Levantine cuisine is both famous and influential, it is not the traditional food of every Arabian country. You'll find it across the region, but there's much more to sample during your time cruising the Middle East and Arabian Gulf. 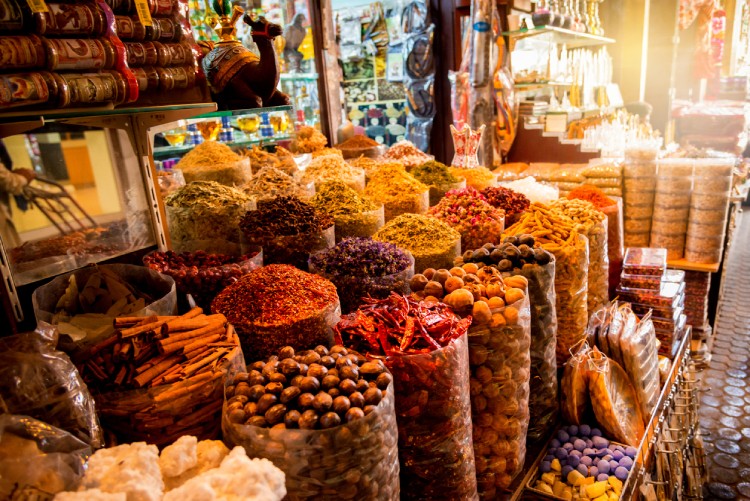 The United Arab Emirates is home to the cosmopolitan cities of Dubai and Abu Dhabi. Here, you'll find the cuisine to be creative and globally inspired. Much like Levantine cuisine, this inspiration reflects the UAE's history as a trading hub. Flavor is the name of the food game here, with many of the region's most-popular dishes enjoying an infusion of spices and ingredients sourced from across Asia, the Arabian Gulf, and the Middle East. Some of the more common ingredients in Emirati cuisine include cinnamon, turmeric, nuts, saffron, limes, and dried fruit.

It's easy to think of the UAE as the desert, but cities like Dubai are coastal. As such, you can expect fish to be a highlight of many local dishes. Ask locals, and they'll tell you the most popular seafood dish in the city is madrooba. This dish, consisting of salted maleh fish, and spices in a thick sauce, has its origins in Bahrain, but has won over many an Emirati over the years. We think it will win you over as well! Many regional restaurants also serve jasheed, a traditional dish of minced shark meat with onion, spices, and rice.

Speaking of tradition, in classic Emirati cuisine, camel meat is commonly served in the region. Often, this meat was reserved for special occasions like weddings or Eid-al-Fitr. These days, however, you'll see it on the menu at most traditional restaurants. In addition, lamb and seafood stews are popular.

Of course, pork is one thing you might not find on menus in the UAE. This is because Muslims are prohibited from eating this meat. As a result, you'll frequently see pork substitutions on menus, such as beef and veal. Now, this doesn't mean you won't find any pork in the UAE — it just takes a little more work! Typically, if a restaurant does serve pork, it's clearly labeled as such.

Finally, if you have a sweet tooth and a love for traditional desserts, try luqaimat. These sweet dumplings typically consist of milk, sugar, butter, and flour fried up and covered in delicious date syrup. Perfectly named (luqaimat means bite-sized), this famous traditional dessert is the best way to cap off any meal. 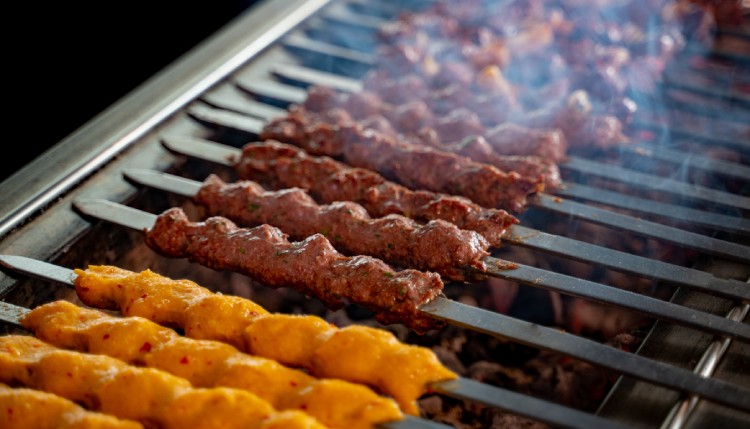 The cuisine in Qatar is constantly evolving, which makes sense when one considers the growth and evolution of this country over the last several decades. Qatari cuisine takes plenty of influence from the region surrounding the country, and you'll quickly find sway from India, Lebanon, North Africa, India, Iran, and more. There's also a large ex-pat community here, so you'll find restaurants expertly serving up dishes from around the world.

If there's one dish that is unmistakable Qatari, it's machbous. In fact, it's so beloved that it has become known as the country's national dish. Machbous features basmati rice, pine nuts, raisins, onions, tomatoes, and a mix of spices with mutton, chicken, or fish. Often, it's served with a side of spicy salsa for an added kick.

Mathrooba and margooga are two other popular traditional Qatari dishes. Mathrooba is often eaten to break the fast of Ramadan and is a rich, buttery porridge-like chicken dish. Margooga is a hearty and healthy stew of meat, eggplant, carrots, and spices. It's usually enjoyed with a piece of farrago bread.

Oman is a small country on the Arabian Peninsula. Like the other countries we've covered, Oman's geographic position at the crossroads of Asian and African trade routes has created a culinary culture as distinctive as it is flavorful. North African, Persian, Arab, and Indian influences play a huge role in the cuisine here. Dates and seafood are Oman's most common local ingredients, and the cuisine relies on imported ingredients like black limes, coconut milk, and clove. 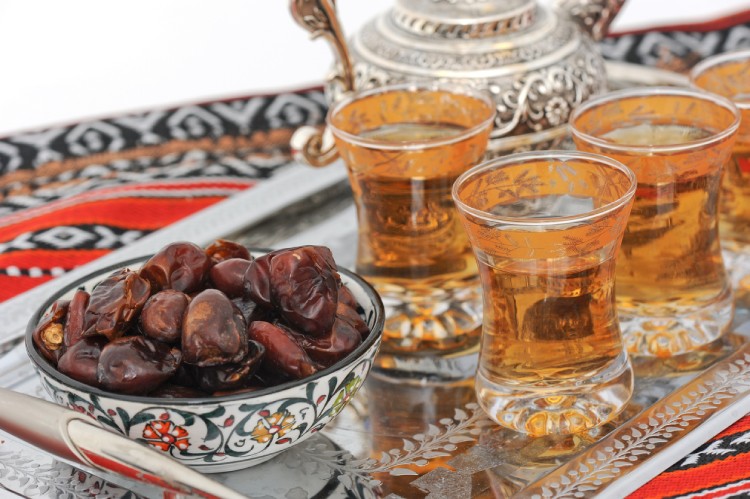 As soon as you arrive in Oman, you'll discover that locals love dates. And for good reason. The dates produced in this region are delicious. Mouth-watering and — occasionally — massive, dates are essential to Omani cuisine and are often served on their own, as part of Omani sweets, or with kahwa.

Omani coffee flavored with cardamom, called Kahwa, is integral to local culture. Visitors are held in high esteem and hospitality is of the utmost importance. Kahwa is always served to guests, typically with traditional sweets.

For many, Shuwa is considered to be Oman's signature dish. Meaning grilled meat in Arabic, Shuwa is often prepared for special occasions such as Eid. This isn't a quick dish. In fact, it takes several days to prepare, but like most time-honored recipes, the wait is worth it. Preparation begins by marinating the meat in spices, then wrapping it in banana leaves or palm leaves. From here, the meat is placed in an underground sand oven, where it is slowly cooked over one to two days. Finally, when it's ready, the meat is served on a bed of rice. As we mentioned, this dish is usually prepared for special occasions, and the meal is a communal event that brings out locals in celebration. 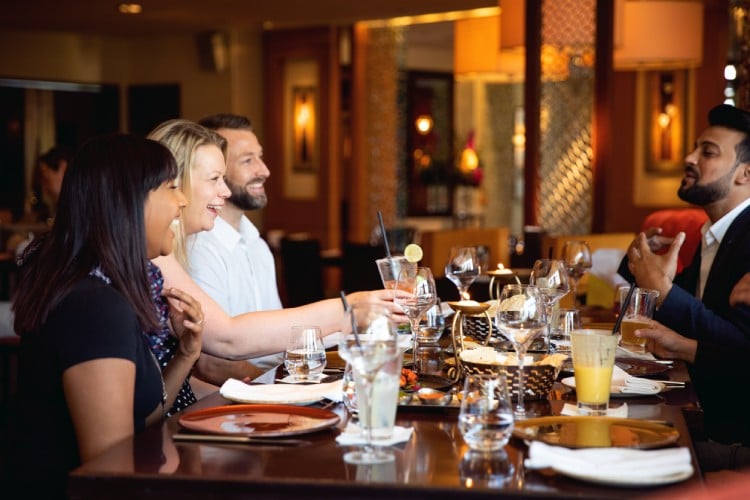 If you're a foodie, you'll find some fantastic Shore Excursions that explore the cuisine of the Arabian Gulf. In Dubai, you can travel to the Sahara Desert Resort for an authentic desert dinner experience. Here, enjoy an array of five-star cuisine infused with authentic Arabian flavors as local performers delight with music, fire dances, belly dances, and more. Or, enjoy a Bedouin dinner on the dunes, where you'll indulge in grilled meats and Arabian sweets under an unforgettable blanket of stars. In addition, there's gold cappuccino in Abu Dhabi and High Tea in Muscat. So whether you're craving something small or a feast fit for royalty, you can find it when you cruise the Arabian Gulf with us.

From high teas at luxury hotels to traditional barbecues at Bedouin camps (not to mention the incredible food onboard), an Arabian voyage will delight your taste buds.

Explore our upcoming voyages to the Arabian Gulf today.