Inside the famous Sambadrome you can feel the rhythm of the music pulsing. Tens of thousands of spectators fill the stands, bedecked in extravagant, shimmering costumes with cocktails in hand. The tourists have been celebrating all day, but the locals (known in Rio as cariocas) have been celebrating for weeks. When the parade begins it’s like a real-life kaleidoscope of color and movement.

This is Rio’s Carnaval, and it’s so much more than the world’s best-known party—it’s the greatest show on Earth.

Get Schooled In Samba

What is Carnaval, anyway? It’s a festival observed in the days leading up to the Catholic fasting season of Lent. It’s thought that the origins of Carnaval might be found in early European Pagan celebrations. Traditionally, Carnaval was seen as a final opportunity to eat decadently before a period of restraint. The festival evolved to include parades, masquerades and costuming, and general revelry.

Carnaval is celebrated worldwide. Although Carnaval isn’t unique to Rio de Janeiro, Rio’s Carnaval is unique. It’s the largest festival in the world, blending together a variety of cultural traditions, music, and dance in a way that no other celebration does. 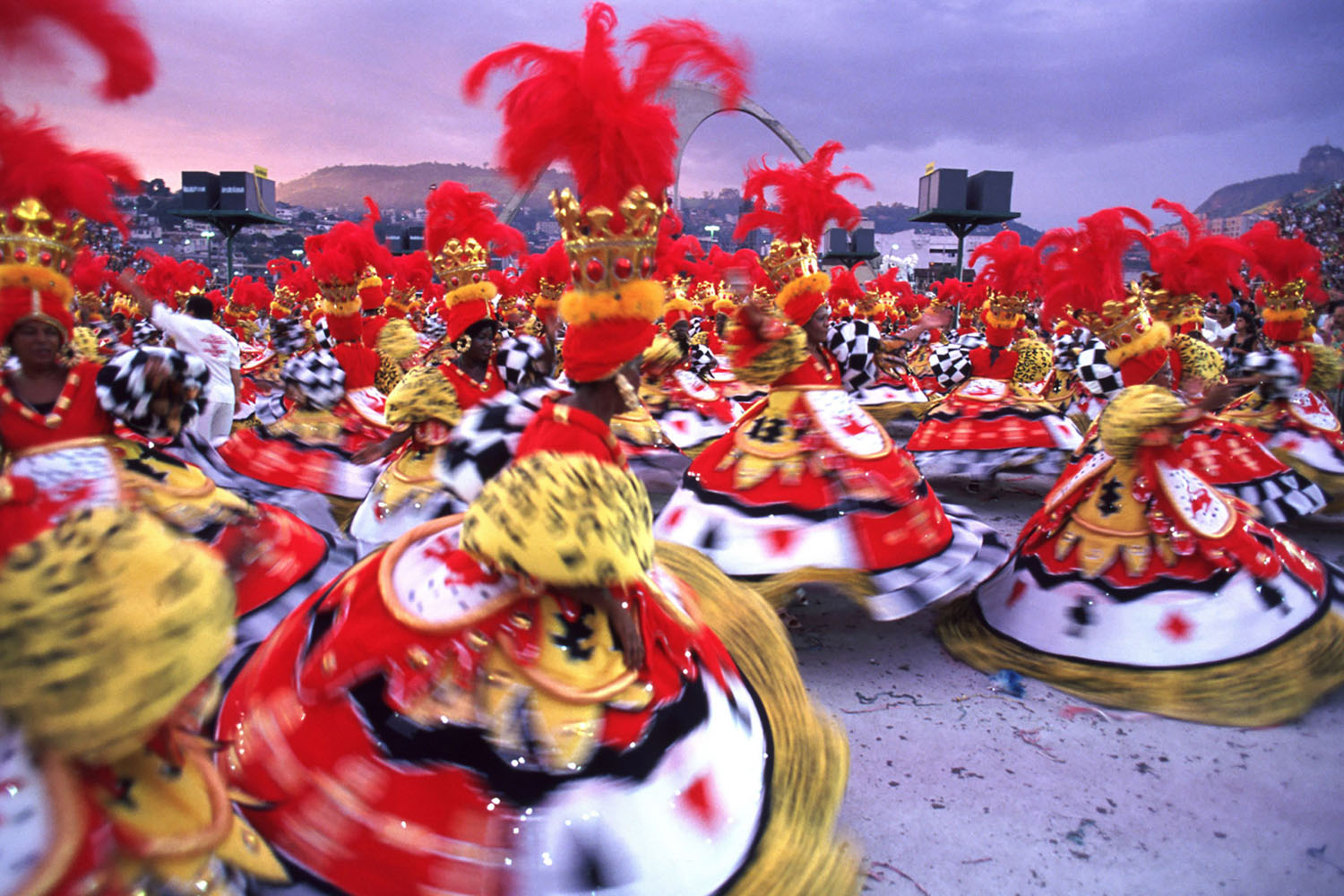 Carnaval came to Brazil by way of the Portuguese, who began colonizing the country in 1500. Though Portuguese settlers didn’t introduce the concept of slavery to Brazil, they enslaved both indigenous and African peoples. Between 1500 and 1866, close to five million Africans were brought to Brazil as slaves.

Early iterations of Carnaval included European traditions, like the masquerade ball. But Brazil’s unique Carnaval developed as these traditions melded with aspects of African culture preserved by slave communities. Over time, the music and dance of the West African diaspora evolved into samba.

Slavery was abolished in Brazil in the late 1800s and former slaves moved to the outskirts of Rio de Janeiro. It was in these communities that samba took off. By 1917 samba had become synonymous with Rio’s Carnaval. In the 1920s, samba schools began to emerge.

Rio’s samba schools aren’t really schools—they’re more like community-based dance clubs. A competition among the schools is Carnaval’s signature event. Each year, schools from across the country parade down the massive Sambadrome all night long (we’re not kidding, competitions usually begin around 8pm and don’t let up until as late as 7am). Lesser-known schools perform on Friday and Saturday, while the twelve best samba schools in the city duke it out on Sunday and Monday. Each school has around an hour to strut their stuff. 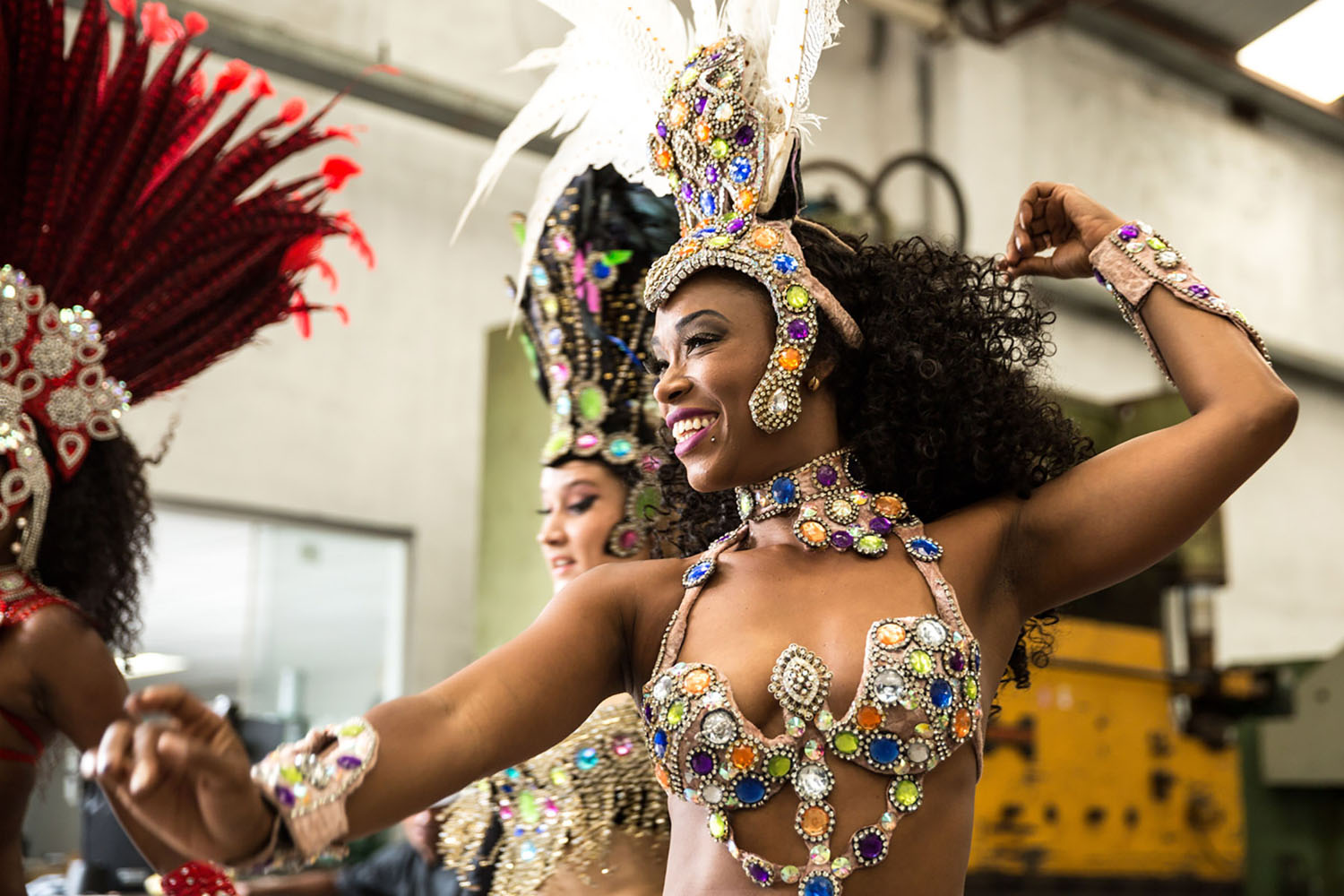 First comes the Porta Bandeira, a costumed female flag-bearer. She leads her samba school’s parade, accompanied by her protector, a male dancer called the Mestre Sala. Keep your eyes on these two, as they’re typically the samba school’s best dancers. The school’s Queen—a beautiful woman dressed in an elaborate costume—leads the drum section. Every school is comprised of hundreds, even thousands, of participants. The outlandish costumes, mesmerizing moves of the performers, and dazzling floats combine to create a stunning, unforgettable spectacle.

Get Loco at Blocos

You know the saying, “When in Rome, do as the Romans do.” Well, when in Rio, do as the cariocas do. The Sambadrome competition is a sheer spectacle, and a great way to witness the best of the best when it comes to music and dance—but it isn’t the only way. If you really want to experience Carnaval—live it, feel it, soak it all in—blocos are your ticket to authentic Carnaval celebrations that take place across the city—away from the TV cameras and commercial sponsorships.

Blocos are massive street parties featuring parades, music, and dancing. From dusk until dawn, hundreds of blocos take place across the city. Typically, these parties begin up to a month before Carnaval and continue for weeks afterward. 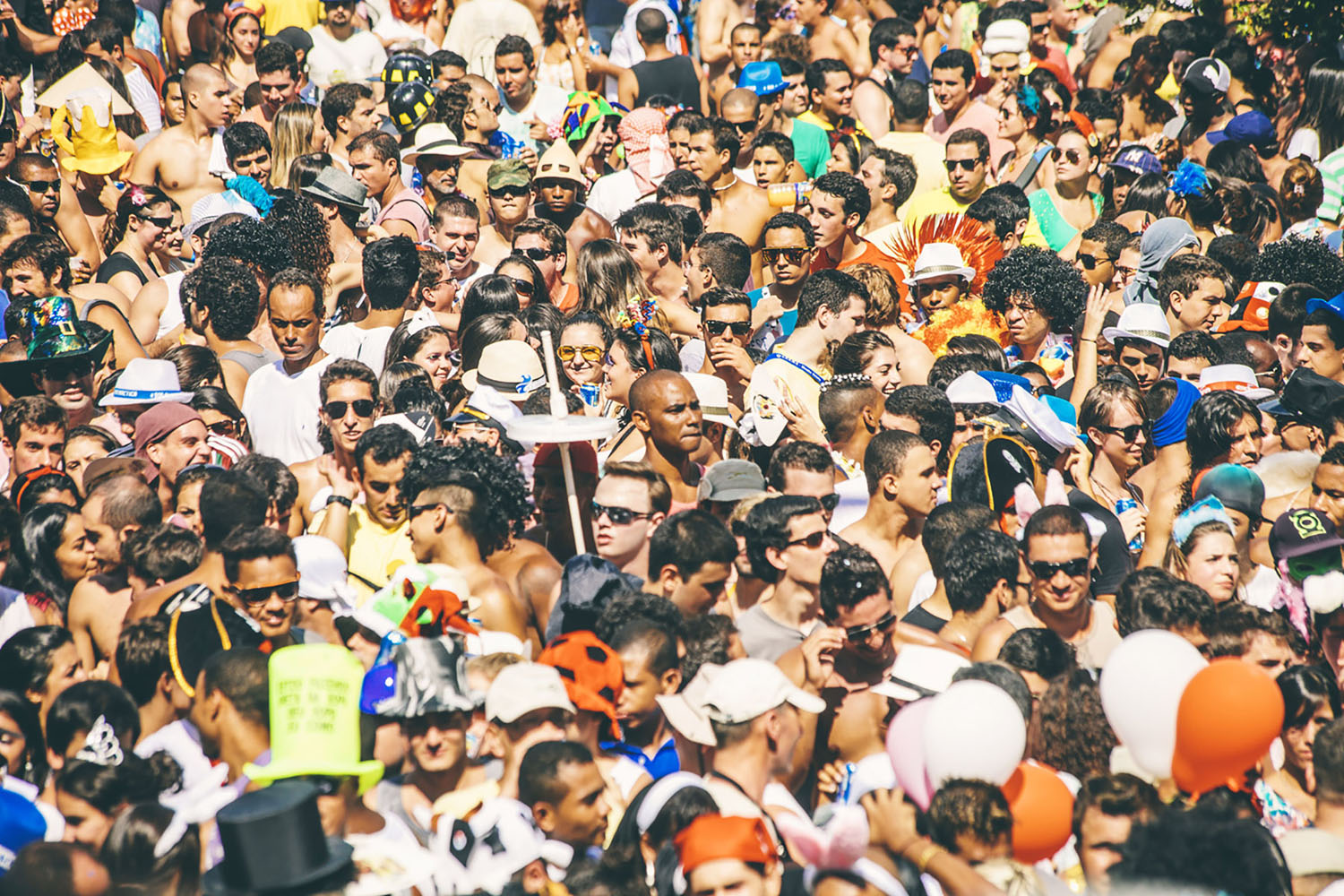 During Carnaval, millions of people take to the streets of Rio every day and turn the city into one giant party. Batucadas bands play their percussion-heavy style of samba. Music thumps across Rio like a heartbeat. Samba isn’t restricted to the streets, either—Rio’s beaches have a party-like atmosphere year-round, but they really heat up during Carnaval.

Every bloco has a unique vibe and personality, and even its own theme song. Cordão do Bola Preta in the city center is Rio’s oldest and largest bloco. Sargento Pimenta is a bloco inspired by The Beatles, featuring floats and effigies dedicated to the Fab 4 and many of their most famous songs reimagined with Brazilian rhythms. Most blocos are mobile and follow a particular route, but trust us—you won’t have any trouble finding a party during Carnaval. They’re everywhere. Some blocos have themed costumes, but as long as you’re dressed in fun, bright colors you’ll blend right in. Add some feathers or sparkles to your outfit for fun! 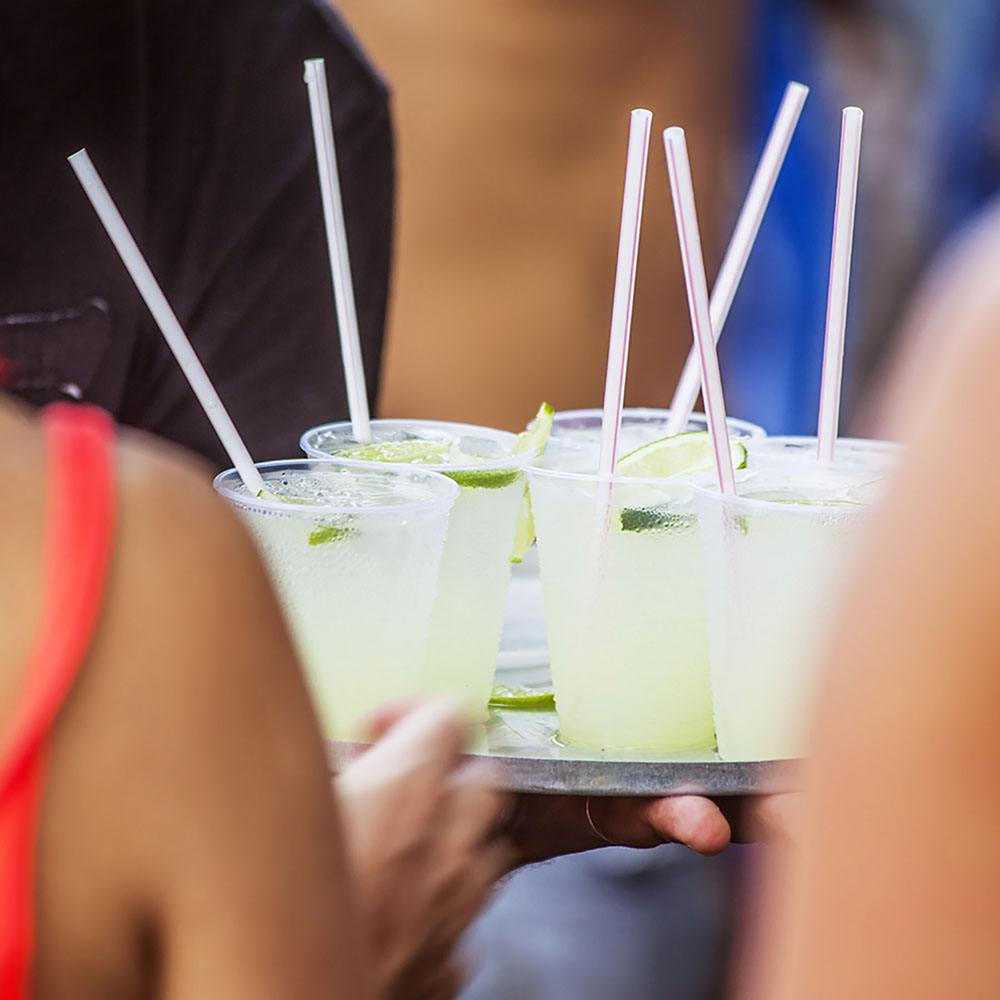 On every street corner and along every beach, vendors are hawking beer and spirits. Caipirinhas (Brazil’s national cocktail, made of cachaça liquor, sugar and lime) are flowing plentifully at bars and restaurants. They’re perfect for washing down espetinhos, a popular street food in Brazil. Espetinhos are basically barbecued sausage skewers served with hot sauce. Feijoada is another popular dish to try during Carnaval. This slow-cooked pork and beans with rice is a Brazilian staple popular amongst cariocas and visitors alike. And, of course, smart partygoers know it’s important to make sure you’re getting enough water—especially during the summer in Brazil!

Feel the Electricity of Rio 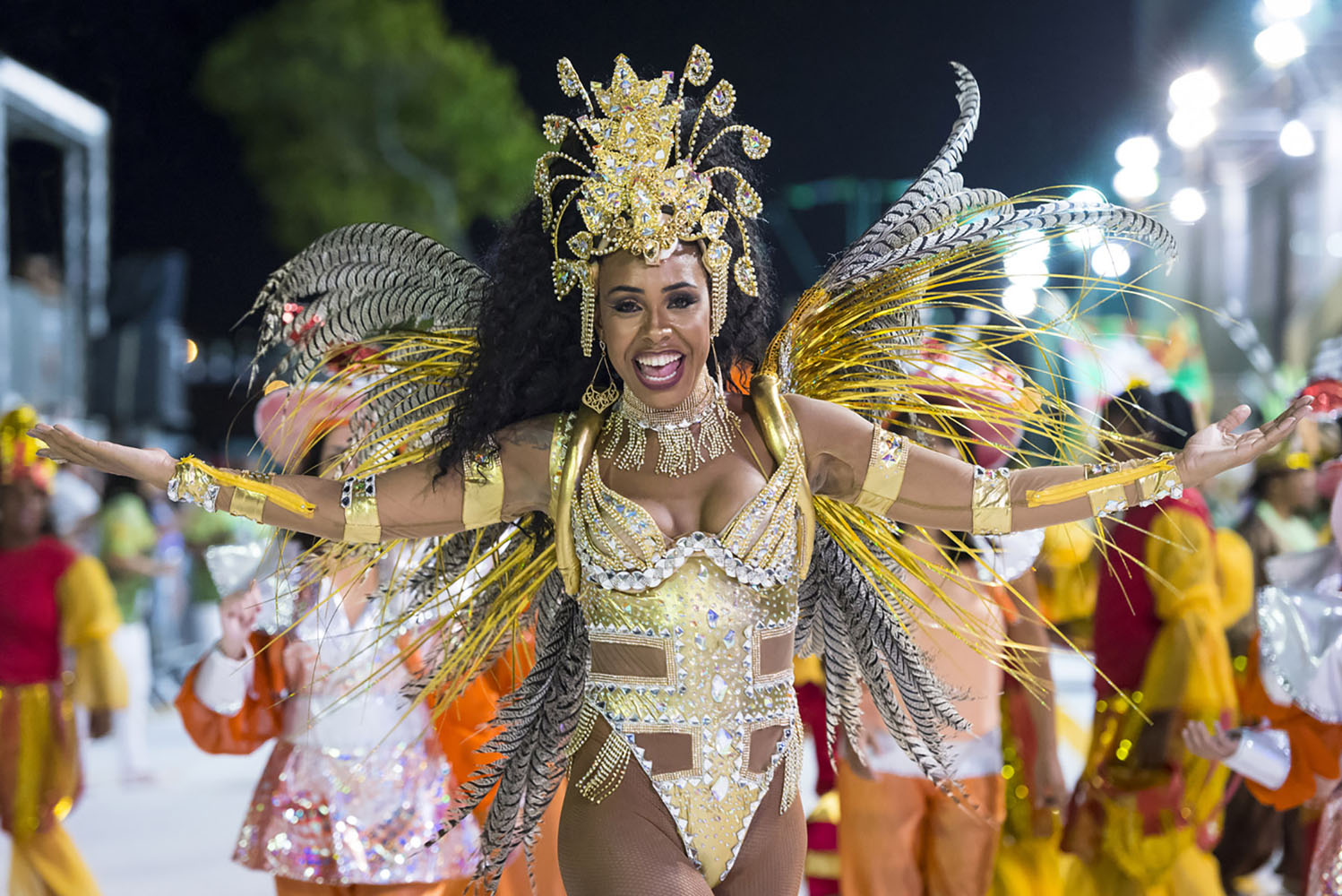 Rio’s Carnaval is the greatest show on earth and draws hundreds of thousands of tourists each year—but it’s not all the Cidade Maravilhosa (Marvelous City) has to offer. Here, you’ll find endless beaches, world wonders, and a lust for life that is absolutely second to none. Enjoy a healthy açaí juice, or indulge in delectable cheese-filled pão de queijo and a few tall glasses of chope (draft beer). Whether you prefer to stroll the city streets or take it all in from above in the cable cars of Pão de Açúcar, traveling with us offers an opportunity to discover the authentic Rio.

Join us aboard the Azamara Pursuit for the experience of a lifetime. Our mid-size ship is like a boutique hotel at sea. With all the inclusive amenities onboard, you won’t need to worry about a thing. Pack your feathers and sequins; we’ll handle the rest.

We can’t wait to samba through Rio with you. Browse our upcoming cruises to Brazil today.

The Art of Travel: de Botton And van Gogh in Provence

I have a favorite book on travel; one of many, but today I’m musing on this wonderful little book. It is The Art of Travel, by Alain de Botton, 2002....