The news is out! In August of 2021, we’re once again setting sail to uncover the beauty of the world around us. And our first stop is one of our favorite places on Earth, Greece. Sun-kissed and sensational, with sparkling blue waters, Greece has earned its reputation as a destination for explorers and merry-makers alike. But there’s more to this nation than endless beaches and beautiful views. Vibrant culture, rich history, delicious food, and an unmistakable love of life blanket every inch of the country — from the myriad of islands to the magnificent mainland.

Yes, Greece is one of a kind, and we’re looking forward to exploring every aspect of it. And if you’re planning on joining us on a Cruise to Greece, there’s plenty to look forward to — starting with these five destinations we can’t wait to visit! 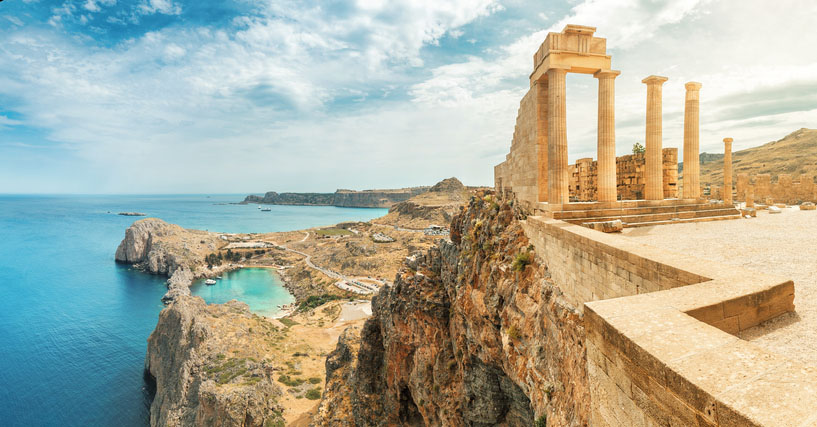 If you hold history near and dear to your heart, then Rhodes should absolutely be high on your list of must-visit destinations. After all, this was the home of the Colossus of Rhodes, one of the original Seven Wonders of the World. There are more than 10,000 years of history waiting to be discovered here on this Dodecanese island. In fact, the city of Rhodes is one of the best-preserved medieval cities in the world. A UNESCO World Heritage site, the city’s sandstone buildings rise above cobblestone streets overflowing with charm. You can enjoy an insider’s look at historic Rhodes when you join us on a shore excursion for a fascinating walking tour. This excursion will give you a look at the real, authentic Rhodes, including a stroll through Old Town, a stop at the Inn of Knights, and a tour of the Palace of the Grand Masters. 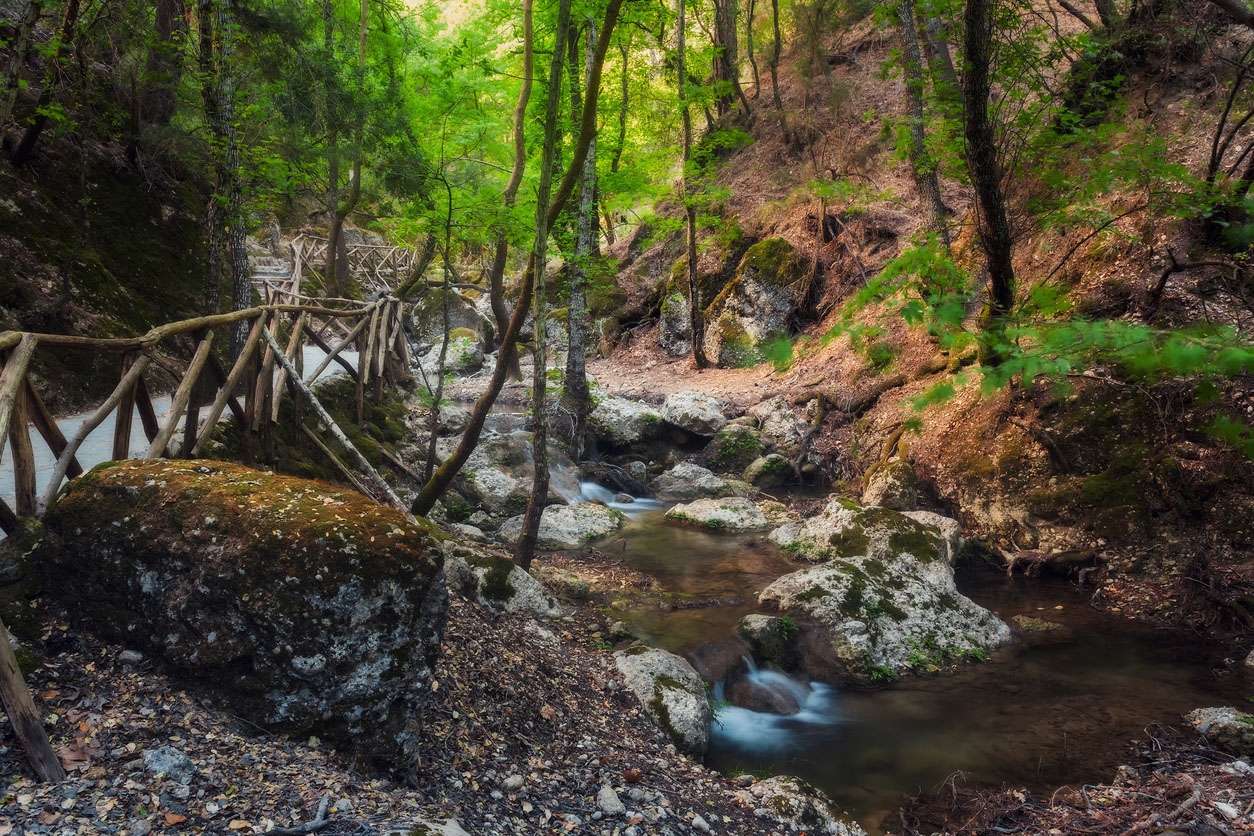 If you’d rather escape the city, join us on a hike through two of the most gorgeous natural attractions in all of Rhodes — the Valley of the Butterflies and the Seven Springs. From early June through September, the Valley of the Butterflies is awash with color. Butterflies flock here, in part because of the resin found in the storax trees native to the area. You’ll learn all about this resin on your guided hike, while also taking in a landscape dotted with waterfalls and lush greenery. From here, we’ll visit Seven Springs, an absolutely stunning series of natural springs that come together to form a secluded and shimmering lake. Generally known as one of the most romantic spots on the island, Seven Springs is an unmissable stop for you and that special someone.

During our time in Rhodes, you can also join us for an all-new Destination Celebration — Greek Gods and Violins. This enchanting evening brings the Greek Isles aboard your boutique hotel at sea for an evening of delicacies, drinks, and the delightful sounds of Duo Violins. This complimentary evening of revelry is sure to be one you’ll never forget. 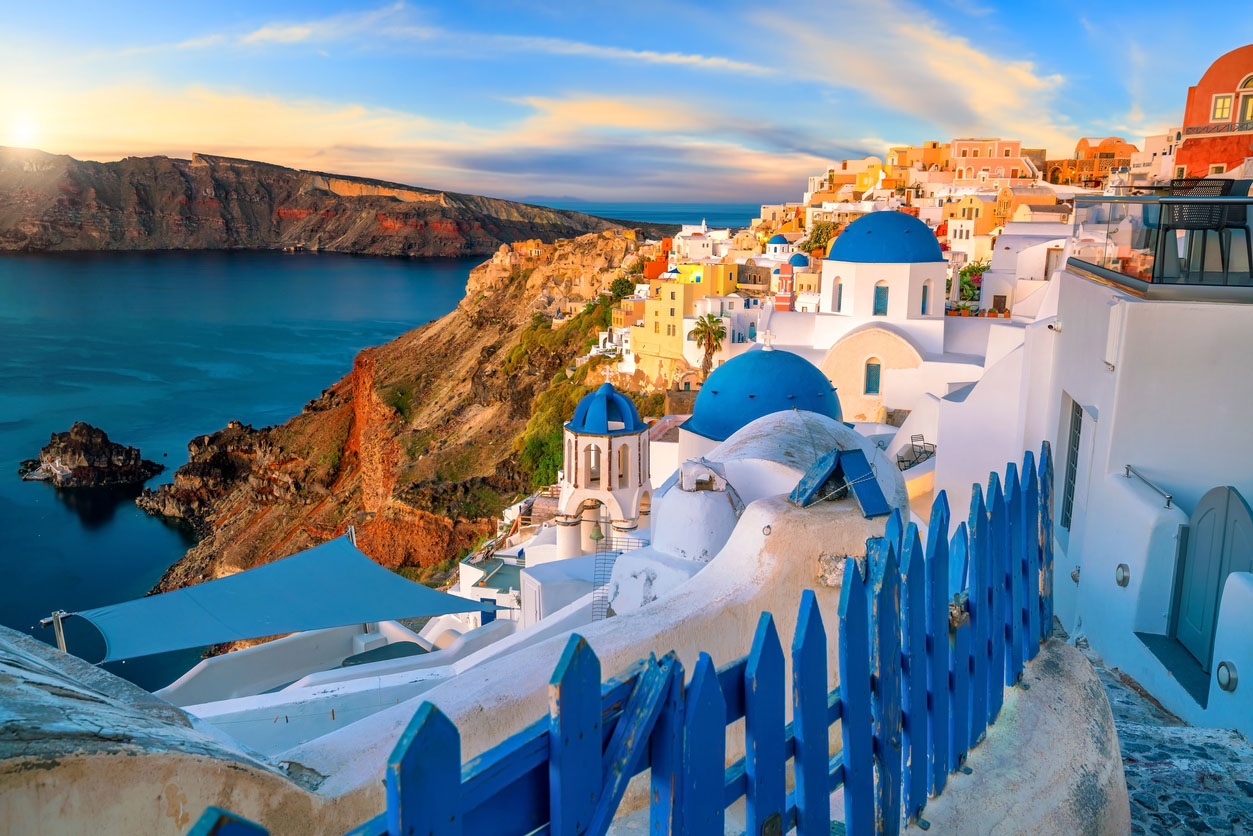 For many, Santorini defines the Greek Island experience. And it makes sense. This is an island known as the Gem of the Aegean. It’s home to cliffside villages, whitewashed, sun-bleached buildings, pristine panoramic views, and sunsets that will take your breath away. Simply put, it’s not just one of the most beautiful destinations in all of Greece; it’s one of the most beautiful destinations in the world. 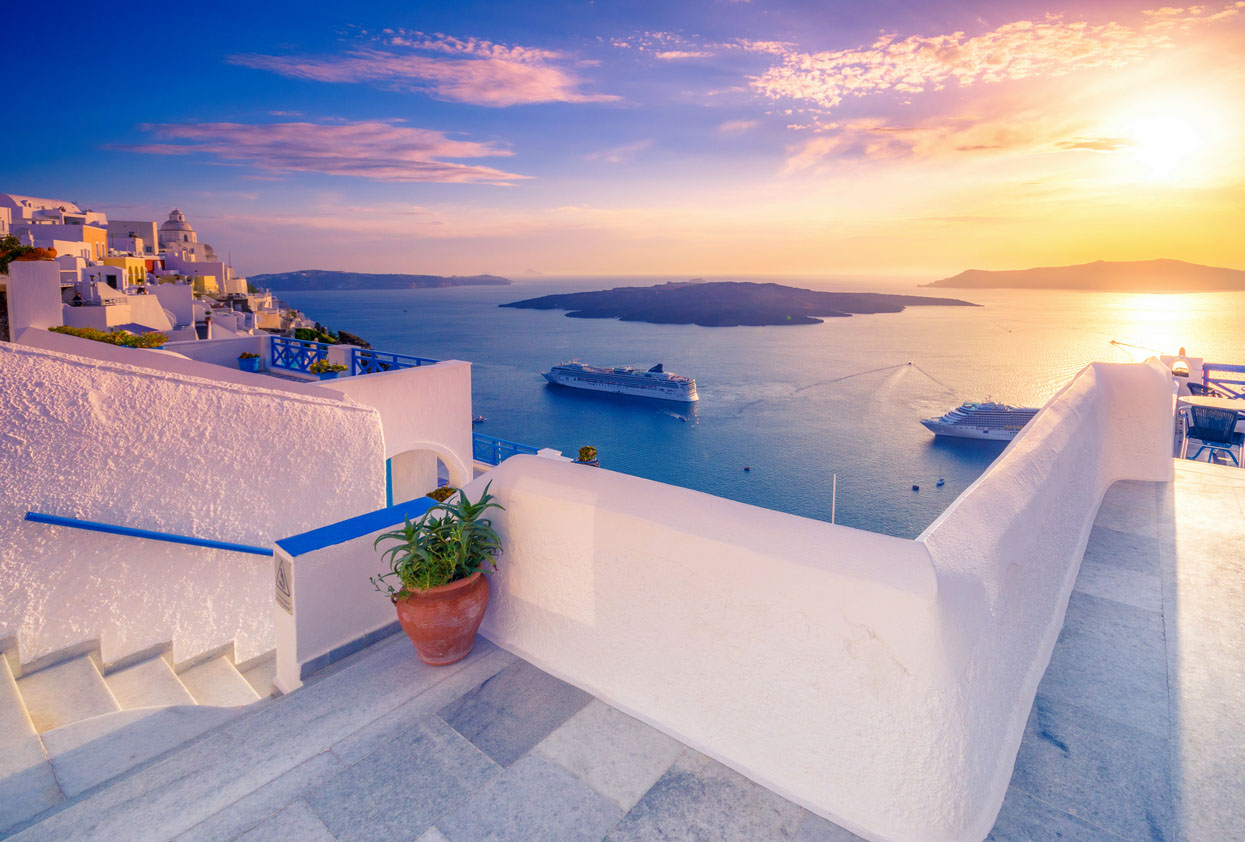 Santorini’s main town is the vibrant, visually stunning community of Fira. Nestled on the rim of a caldera some 900 feet above the sea, Fira is the quintessential town of the Greek Isles — white cobblestone streets, bustling cafes and tavernas, and spellbinding views. Seriously, you’ll want to find the perfect cliffside seat around sundown for an absolutely spectacular show.

You can explore Fira, as well as other villages of Santorini, when you join us on the Villages and Vintages shore excursion. And as an added bonus, you’ll have a chance to sample the fabulous flavors of the island’s iconic wineries. This sightseeing excursion will take you to the charming village of Oia at Santorini’s northernmost point. Here, you can enjoy classic Cycladic architecture before visiting a local winery to sample various vintages paired perfectly with delicious Greek mezes. Looking for more wine-tasting opportunities? Try an Evening at Sigalas Winery or the Traditional Tastes of Santorini. 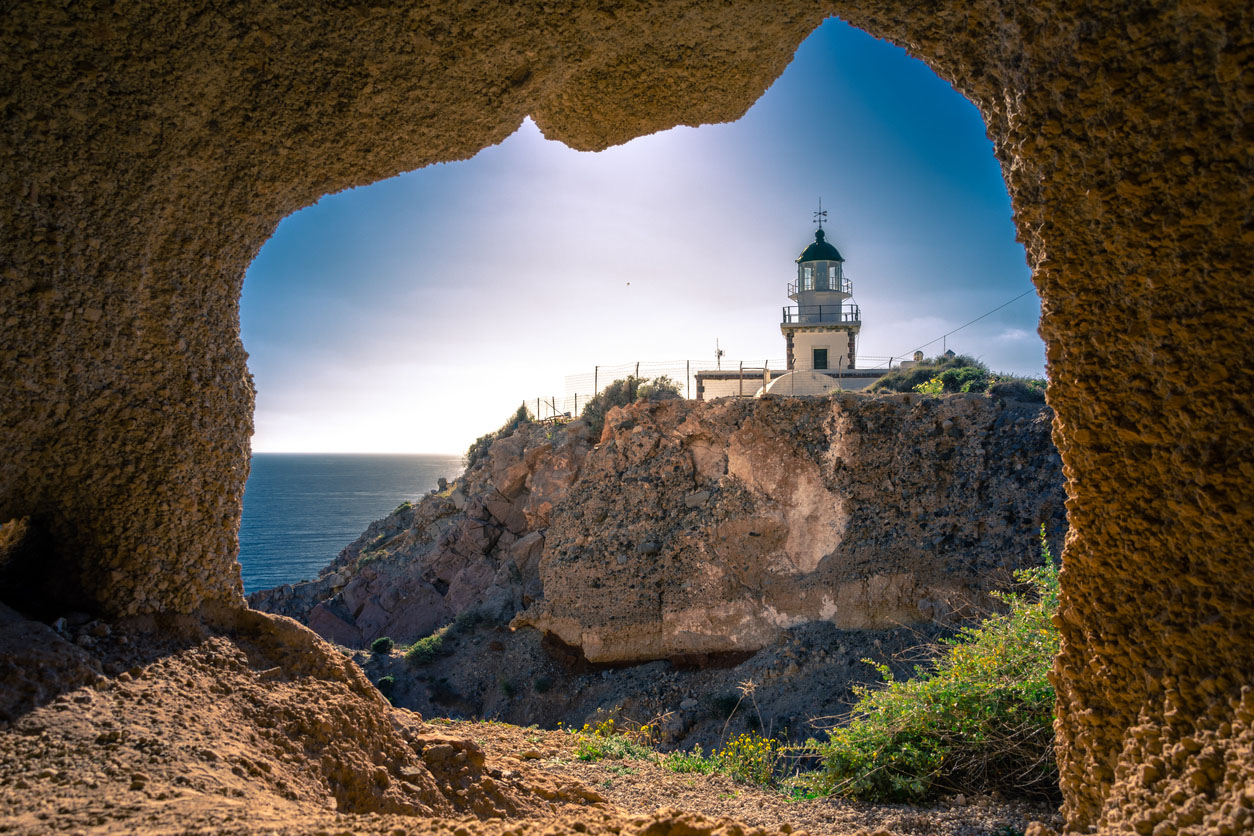 History buffs seeking a once-in-a-lifetime opportunity will love the Lost City Excavations. On this excursion, you’ll travel by private car with an English-speaking guide for a tour of Akrotiri, a fabled Bronze Age city lost to a volcanic eruption over 3500 years ago. Sometimes called Greece’s Pompeii, you’ll learn how the citizens of Akrotiri lived from your personal guide, while also exploring an authentic architectural excavation site. From here, you’ll visit the modern-day village of Akrotiri to enjoy a narrated exploration of the surrounding medieval settlements. 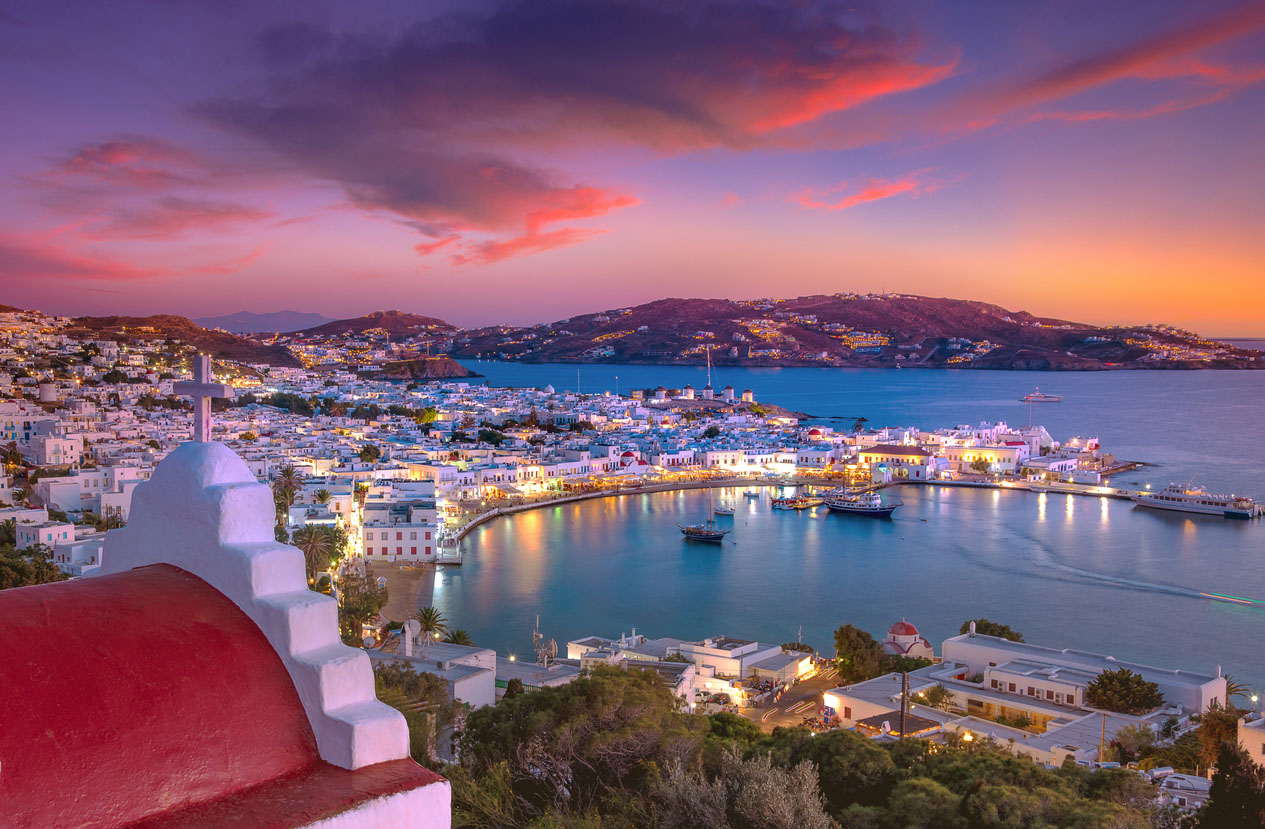 While Santorini may be the quintessential Greek Isles, Mykonos is arguably the most well-known. Often referred to as a hedonistic paradise, Mykonos is a cosmopolitan destination that attracts revelers and relaxation seekers in equal measure. Exuding a St-Tropez-by-way-of-Ibiza atmosphere, there’s an authentic glitz and glamour to Mykonos. Whether you spend your time worshipping the sun on the brilliant beaches or enjoying a glass or two of ouzo in Hora, you’re sure to feel like you’re living your own version of Lifestyles of the Rich and Famous during your time here.

To get a feel for Mykonos Town, we recommend exploring by foot on shore excursion. After all, there’s no better way to learn its history, explore its architecture, and get the inside scoop on its food than with help from a local guide. This walking tour will take you through colorful gardens, underneath Mykonos’s iconic windmills, and along narrow roads less traveled lined with whitewashed homes and blue shutters. Prefer to immerse yourself even further into local life? Take a cooking class at a Mykonian home, where you’ll join a local woman for culture, conversation, and cuisine — all while learning about life on the “Island of the Winds”. Be sure to bring your appetite because you’ll be enjoying some fantastic Greek mezes served straight from the kitchen. 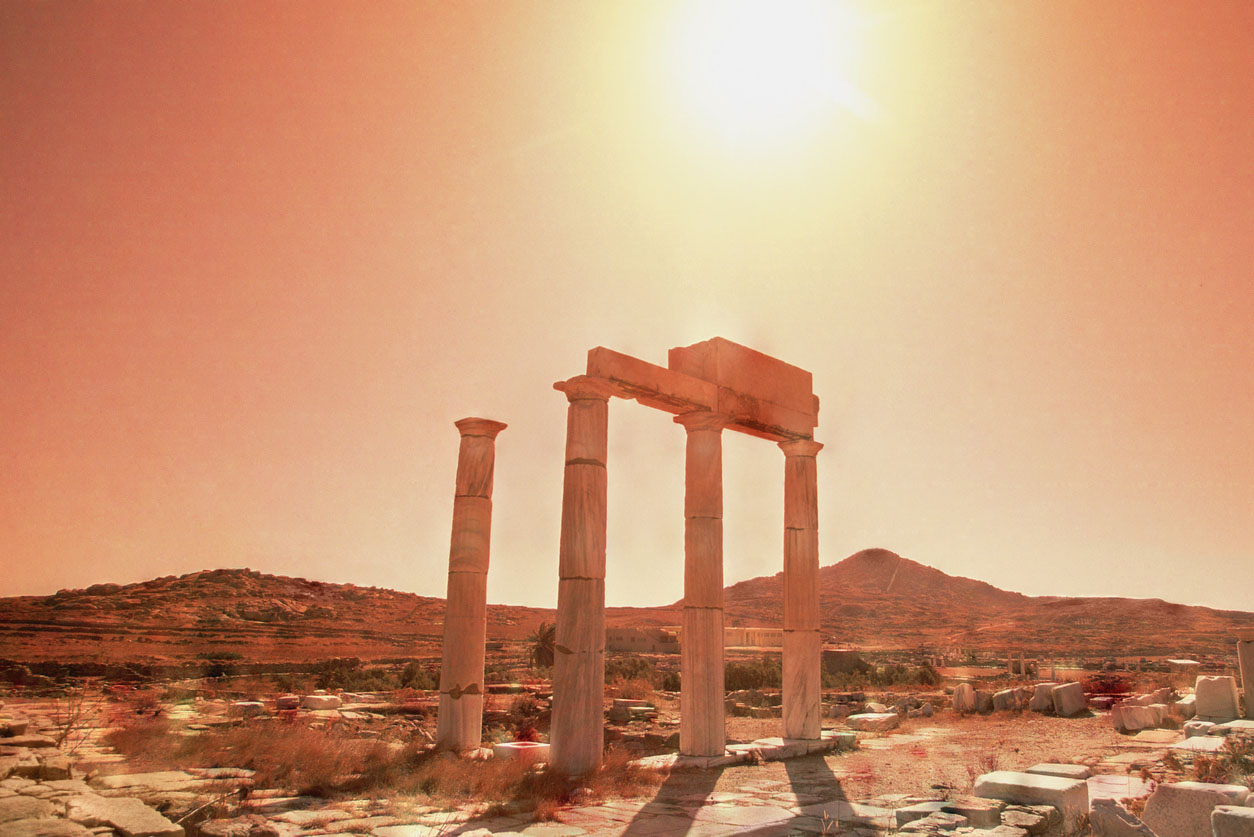 Beyond the villages of Mykonos, across the water, you’ll find the uninhabited island of Delos. Once home to a bustling ancient settlement, legend has it that this was the birthplace of Apollo — the son of Zeus. You can learn all about these legends, as well as stroll an island frozen in time when you join us on the Ancient Delos shore excursion. This in-depth guided tour will take you through the ancient ruins, highlighting monuments like the Great Temple of Apollo and Terrace of the Foreign Gods, as well as the ancient Hellenistic mansions. Instead of hearing about history, this excursion offers you an opportunity to live it. 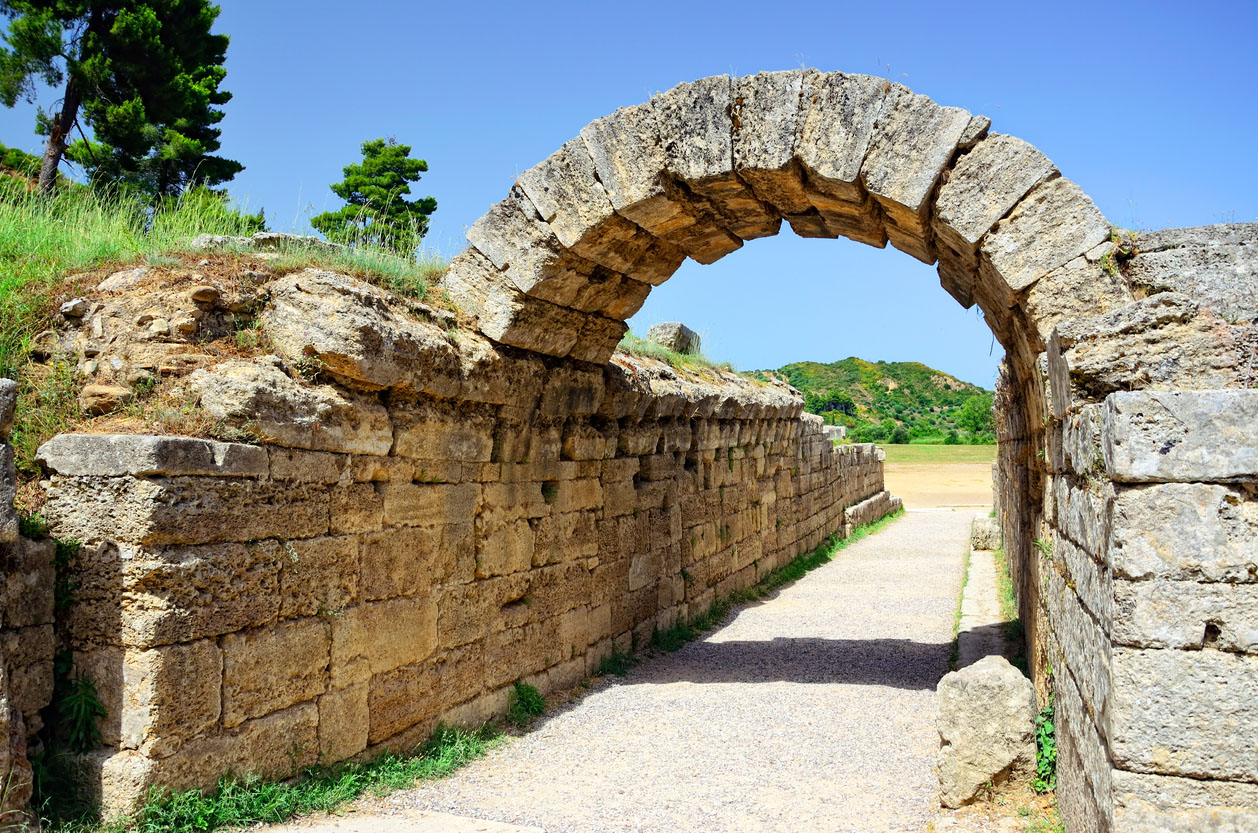 As we mentioned earlier, history runs deep throughout Greece. In many respects, this is where Western Civilization was born. Many traditions celebrated the world over began here — perhaps none more famous than the friendly competition that first took place in Olympia some 2800 years ago. We are, of course, talking about the Olympic Games, which grew out of a celebration — legend has it — of Zeus defeating his father Kronos in a wrestling match to become one of the most significant annual events on the planet.

Today, the sites where these initial games took place are mostly in ruin, but there are still stories to be told, and your imagination is sure to win a gold medal. For example, you can visit what remains of the Olympic Stadium. Once, this stadium could hold 30,000 visitors, making it the largest stadium of its kind. If you join us on the Ancient Olympia & Archaeological Museum shore excursion, local guides will bring the ruins of the stadium and other sites to life in vivid detail. In fact, close your eyes, and you may just find yourself transported to another time when Greek athletes stepped to the starting line before competing in the greatest spectacle in all of sports.

While sports may have put Olympia on your radar, there’s certainly more on the menu here, literally! Join us on the Lunch with Franca at Magna Grecia Agriturismo shore excursion to enjoy an assortment of delicious local foods at the Magna Grecia Farm. And to work up your appetite before lunch, you’ll enjoy a tour of the property, including its great olive groves and vineyards. Does the thought of a vineyard capture your attention? If so, you may want to try the Wine Tasting at Mercouri’s Vineyard shore excursion. On this outing, you’ll visit the heart of Grecian wine country for an unforgettable tour of the Domain Mercouri Winery — complete with samples and snacks. Ya mas! 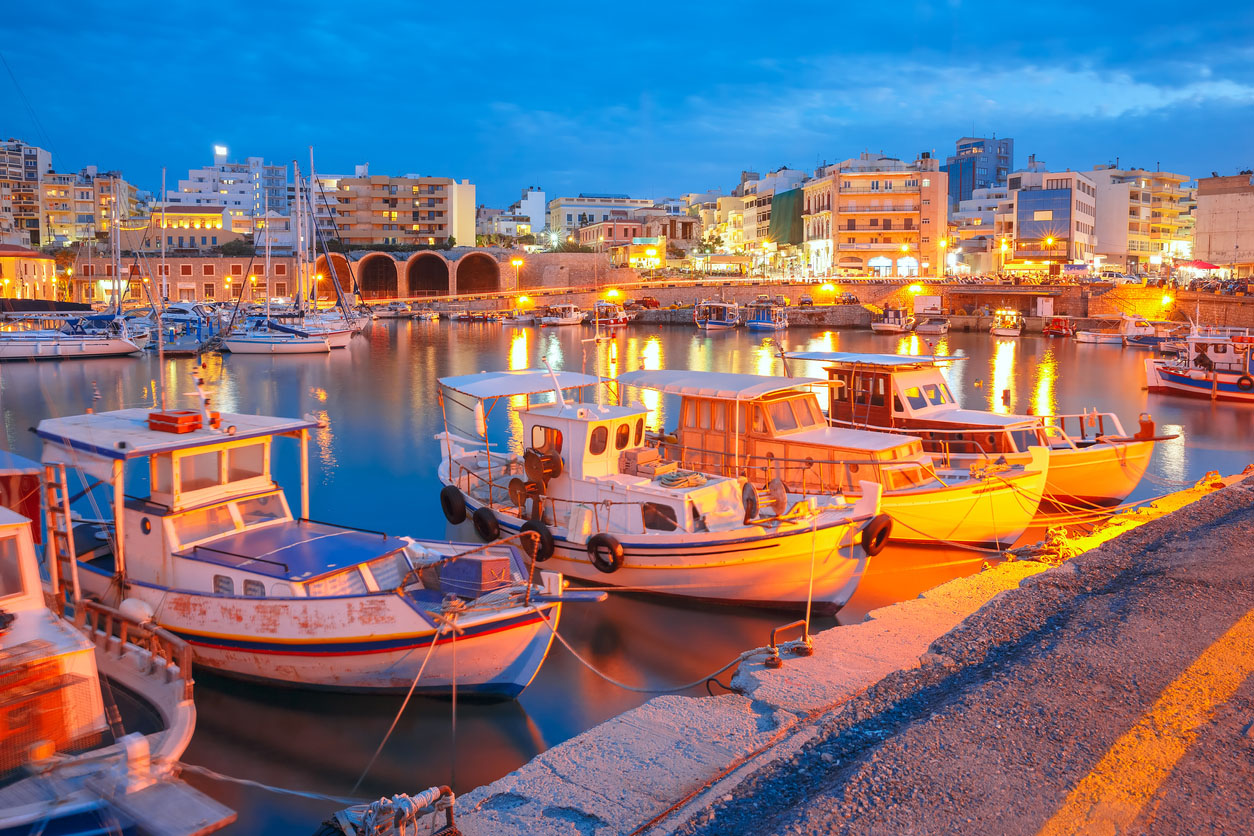 Crete’s largest city (and the fifth-largest city in all of Greece), Heraklion’s roots date back to the 9th century. Over the years, the Arab, Venetian, and Ottoman empires have all laid claim to this city, and this rich and diverse history is on display at every turn. In fact, many of Crete’s can’t-miss sights (and sites) are located right here in Heraklion, from the incredible Archaeological Museum to Liontaria (the city’s main square, highlighted by a 1628 Morosini Fountain). 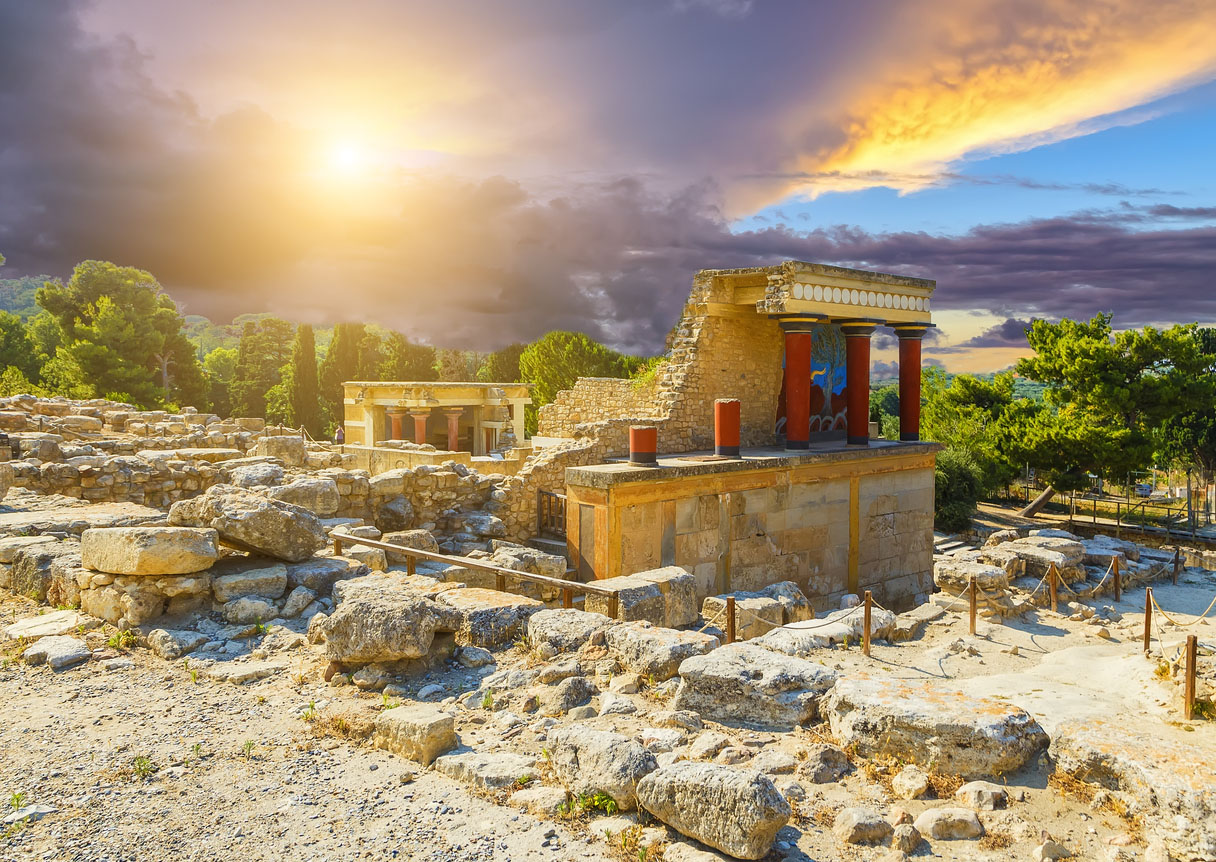 Not far from Heraklion, you’ll find one of the true heavyweights of European history, Knossos. Said to be Europe’s oldest city, this Bronze Age archaeological site was once home to the mythological labyrinth watched over by one of history’s most extraordinary beasts, the Minotaur. You can learn all about its fascinating history when you join us on the Knossos Palace & Museum shore excursion. This in-depth excursion takes a deep dive into the history of Knossos, as well as its larger-than-life legends. You’ll also have a chance to visit the Archaeological Museum mentioned earlier to admire its collection of ancient frescoes, Minoan jewelry and artifacts, ivory figurines, and more.

If Greek wine is your passion, join us on an exploration of Crete’s ancient vineyards and olive groves. This excursion features a special stop at a winery in Scalani Village, where you’ll learn the secrets that make Cretan wines so distinct, as well as sample a few for yourself! If you’re revved up to explore even more of Crete, consider the Minoan Route by 4WD shore excursion. When you join us on this excursion, you’ll be whisked through the mountains along ancient Minoan roads to take in gorgeous vistas, legendary landmarks, and a delicious assortment of snacks and local libations. Or, hop aboard a traditional wooden boat and journey to the island of Spinalonga, home of a magnificent fortress with an intriguing history. 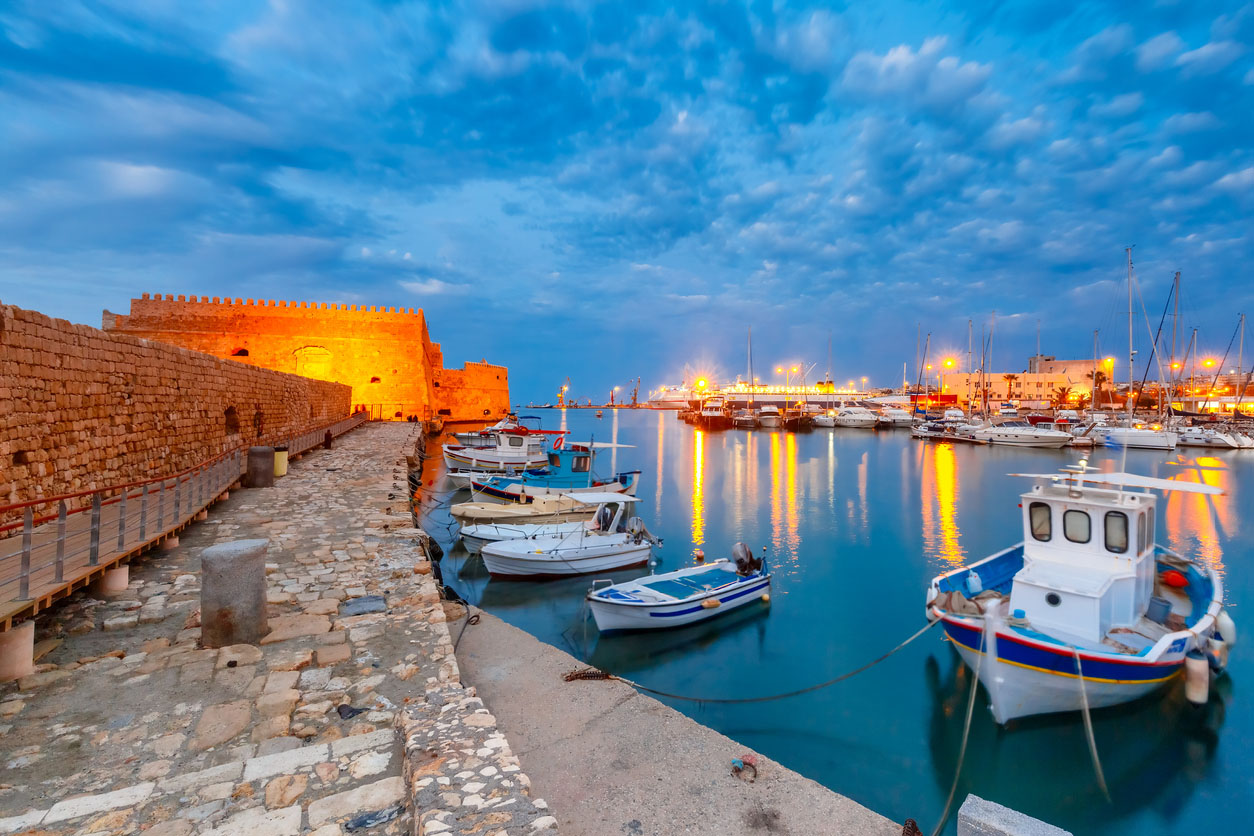 No matter how you spend your time in Heraklion, be sure to end it with a relaxing stroll along the city’s recently revitalized waterfront, where its subtle sophistication is on full display. 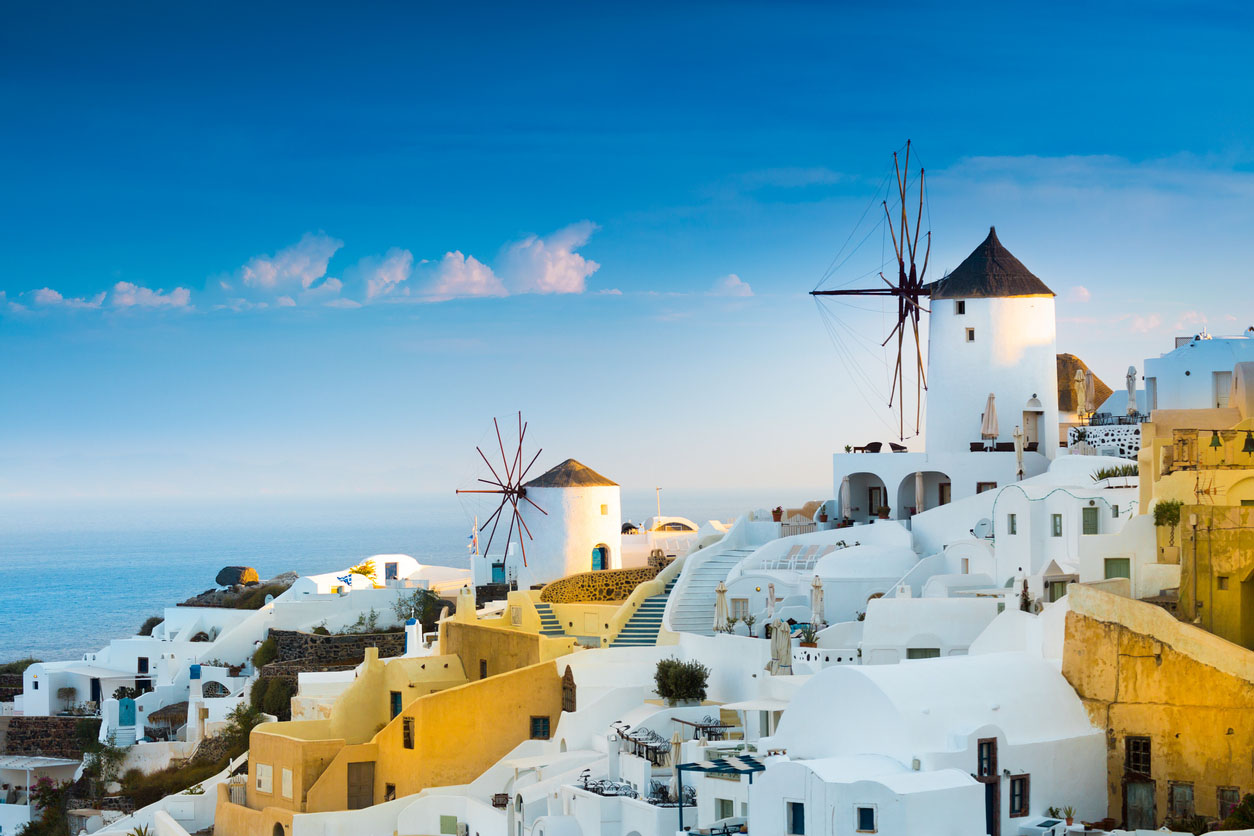 Foodies, history buffs, sun-seekers — no matter your passion, odds are you’ll find it in Greece. The only thing we’re more excited about than returning to Greece is visiting with you. Take a look at our upcoming cruises to Greece and get ready to explore the world once again. Opa!