From the Desk of Captain Carl Smith, Master, Azamara Quest 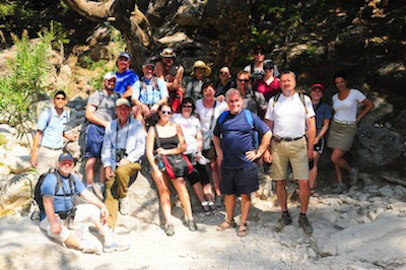 A Walk in the Park: How Little Did We Know...

At the end of last week, Adriana, our Shore Ex Manager called me to let me know that there was a possibility of running the Samaria Gorge Excursion in Chania, Crete. The problem was that there were only 2 guests who had booked, and unless we could meet the minimum participation numbers, the excursion would likely be cancelled by the operator. Samaria Gorge is somewhere which has held my interest since first hearing about it from our Deployment Manager, Claudius Docekal last year, and I have wanted to experience it ever since.

The Challenge: To find and entice sufficient guests to book this excursion, given that it would involve walking 12 miles through a dry riverbed over Libyan Seaterrain, which I had found, described as "Rocks, rocks, and more rocks". Not easy.

Lunch on Embarkation day was spent rounding up likely looking candidates, and giving them the hard sell. This was followed by a further sales pitch at the end of the Guest Drill, and voila. Minimum numbers met, then exceeded, though barely, and the trek was on!

We arrived Chania Anchorage early. The day was beautiful, not a breath of wind, no swell, perfect. I had kind of hedged my bets by checking the weather forecast prior to commencing on the sales, as if there had been any wind, I would not have been going.

We were 20 in total. 16 guests, Jazar (our shore ex rep), Jason (ships photographer), Nigel Marven (Destination Lecturer), and myself.

After spending an hour or so on the coach listening to all the different problems which can happen in Samaria Gorge we arrived at the entrance, over 1200 above sea level, deep in the "White Mountains". The trip up had been exciting, the twists and turns on the quiet country road. The view as the coach rounded one hairpin after another, looking back down the hill at the serpentine way we had come, was fairly awe inspiring on its own. 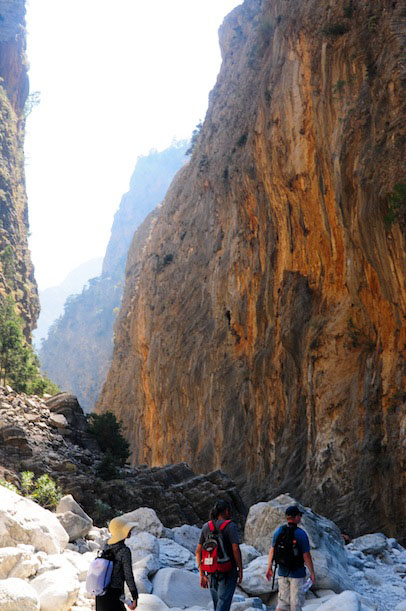 In the coach park we gathered what ever packed lunches we wanted from the baggage bay, and realised that there was entirely far too much food. Typical of any day onboard a cruise ship, but Philip (our Hotel Director) had sent each of us a packed lunch in addition to the one provided by our tour company. Well, it was going to be a long walk.

Within 5 minutes of entering Samaria Gorge, it became apparent that I would be bringing up the rear. This was partly planned. I had no intention of exiting the gorge at the bottom, and finding that I had to return back up 6 or 7 miles to help any guests who had become injured. I had not planned however on seeing a Kri Kri wild mountain goat within the first 500 meters! As it happened, Nigel Marven was right next to me, and we spent a long time pointing different wild life out to each other, with Nigel telling us where to focus our attention and binoculars. 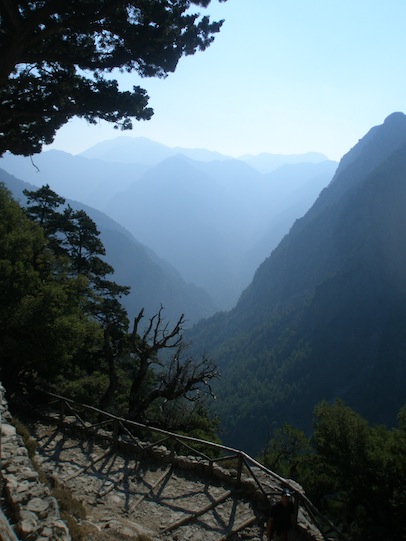 During the descent, we managed to see other "domesticated" Kri Kri's, several different species of lizards, some beautiful birds including the smallest bird in Europe, the Fire Crest, and one of the largest, the Griffin Vulture. Butterflies abounded, and also a kind of Donkey that I had never heard of before, and which I could not understand being told about at first…The Red Cross Donkey.  It took a while to sink in. This was the ambulance! 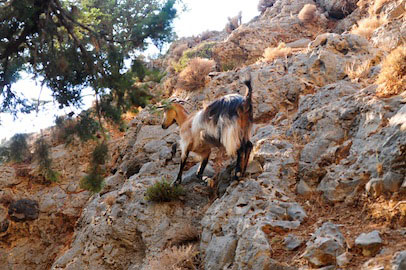 The scenery during the entire hike was spectacular. This caused some major problems though, as when ever we looked up AND took a step, a slip or sprain was immediately experienced to focus our attention back on the ground. In the end, in order to walk the 12 miles down to the bottom of the gorge took us 7 hours. 7 hours filled with pure wonder that somewhere so beautiful and full of wildlife could exist.

There were so many picture stops, I lost count. The most memorable of these, apart from the wild life, is without doubt the "Iron Gates" near the bottom of the gorge, where the cliffs are around 600m high, and separated on either side of the river bed by only 9 feet. The sides of these cliffs are washed to a silky smoothness by the winter river flooding the gorge to around 12 feet, and being forced out through this tiny gap. The park is closed all through the winter and spring for that very reason.  Its not safe. Or should that be its simply more dangerous, as safety is not guaranteed at any time of year. 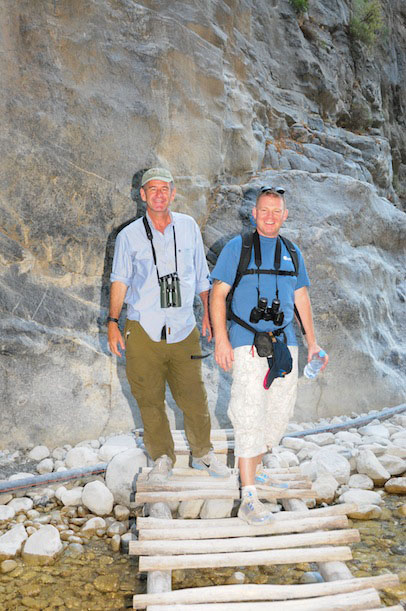 At the end of the hike, we had a wonderful cooked evening meal, followed by a swim in the Libyan Sea. Then a boat trip during which we got to watch a perfect sunset, to the nearest town with a road, Sfakia. A short climb to the car park in Sfakia and the coach was waiting to take us home, dirty, disheveled, and very tired. A wonderful day out.

A Guide To The Greek Isles

Year after year, The Greek Isles is at the top of every list as one of the most popular cruise destinations in the world—and for good reason....

To me, temples and castles seem to be magical, and they take me back to a time in the past. I left Asia as a...

The Seychelles is without a doubt one of the world’s most breathtaking destinations. Everywhere you look there’s an Instagram photo opportunity (if...