Five Things to do in Lisbon

Lisbon, Portugal is one of Europe’s most charming, and often overlooked, cities. Yes, tourism titans like Barcelona, Paris, and Rome may grab much of the attention, but that doesn't bother those who love Lisbon. In fact, ask anyone who’s been, and they’ll tell you the city's under-the-radar position only adds to its appeal. Lisbon offers the energizing pace and exquisite culture of large cities in a smaller, more approachable package. A gothic beauty cradled by seven magnificent hillsides, Lisbon is a city that is certain to capture your heart when you travel here with us.

You’ll have no trouble filling your days in Lisbon, especially with these five tips on things to do.

1. Relax by the riverfront in Baixa. 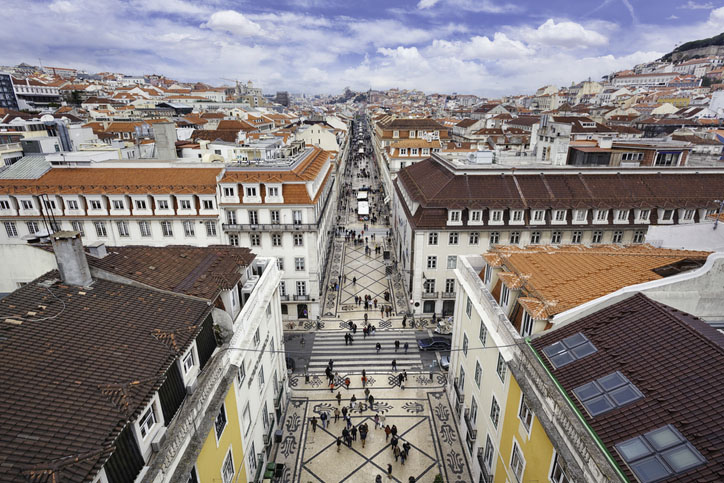 Lisbon is situated on the Rio Tejo (also called the River Tagus), and no journey here is complete without a stroll along the city’s riverfront. Lisbon’s central district, Baixa, lies right on the river and is home to many great restaurants, boutiques, and cafes. You wouldn't know it, but this neighborhood was devastated by an earthquake in 1755. This quake, and the neighborhoods reconstruction, gave rise to the Pombaline style of architecture. Known for its anti-seismic design features, the Pombaline-style buildings in Baixa are some of the first examples of earthquake-resistant architecture in the world. 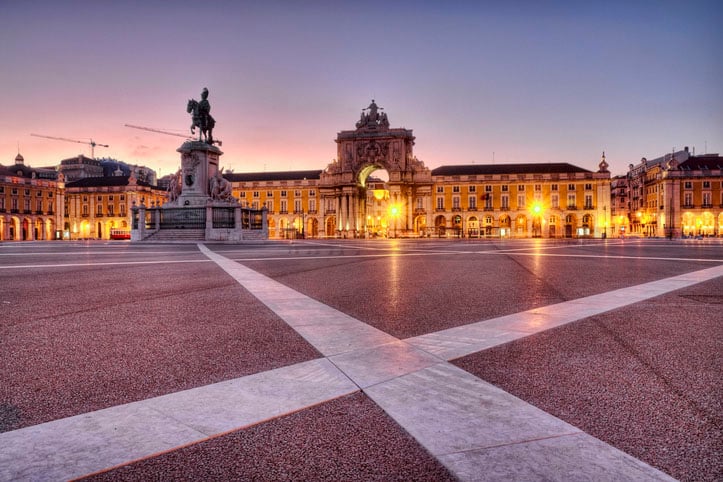 A stroll along the Ribeira das Naus promenade with a coffee to go is the perfect way to start a morning in Lisbon. Begin at the Quiosque Ribeira das Naus (this is where you can get a coffee) and walk about 5-10 minutes to Praça do Comércio, a bustling 18th century public square known for its bright yellow facades and grand arches. Once upon a time, this is where everyone arriving in Lisbon by boat would disembark, making it a fitting first stop for cruise passengers.

A highlight of Lisbon’s Baixa neighborhood is the Núcleo Arqueológico da Rua dos Correeiros. This ruins site and museum is located only a few minutes walk from Praça do Comércio. You can join an archaeologist-led tour of the ruins, which date back to the Iron Age and were exposed during the construction of a parking lot in 1991. During excavations, archaeologists discovered layers of many stages of ruins, including medieval and Islamic, before making the incredible discovery of a Roman sardine factory dating from the 1st century AD. 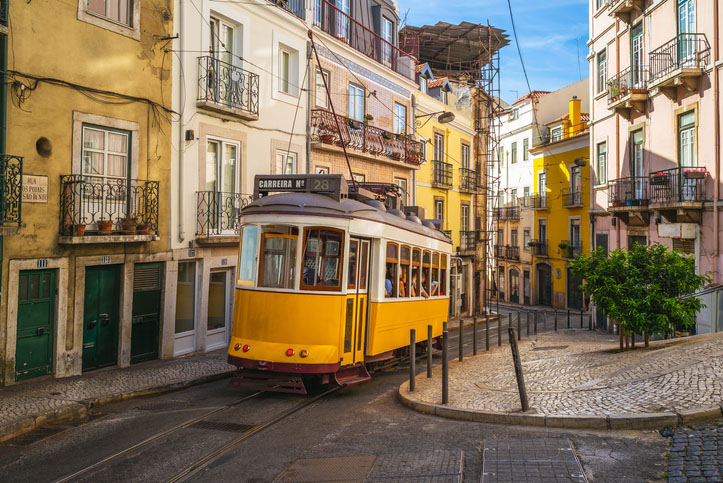 The best way to get a feel for Lisbon is by taking a tram ride through the city. Tram 28 is the most popular route with travelers, as it loops through some of Lisbon’s most charming neighborhoods and provides easy transportation up steep hills. Ride the loop through Baixa, Alfama, and Graça, before hopping off to do some sightseeing.

Unlike Baixa, many buildings in Alfama and Graça, as well as in the adjacent neighborhoods of Castelo, Sao Vincente, and Mourari, managed to survive the 1755 quake. These areas form the historic heart of the city. You can easily spend the better part of a day exploring Alfama and Graça, which have a quieter, folksier vibe than the rest of Lisbon. 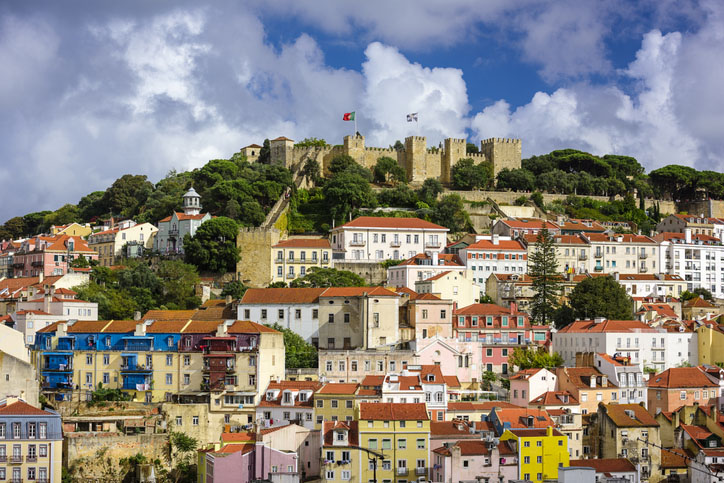 The most famous landmark in this area can be seen from almost anywhere in the city. Castelo de São Jorge (sometimes referred to simply as Lisbon Castle) is a Moorish castle that has towered over the city since the 11th century, though fortifications on the hilltop date back much further. There are tours of the Moorish castle thrice daily, at 10:30 a.m., 1:00 p.m., and 4:00 p.m. You can also tour the archaeological site, visit a permanent exhibition displaying castle artifacts, and enjoy panoramic views of the city below.

In Alfama, don’t miss visiting the oldest church in Lisbon. Sé de Lisboa was built in 1147 and has survived several earthquakes. It’s been modified and restored many times, and thus the architecture is an intriguing mix of several styles. The gothic cloister inside the church is a must-see for history buffs, as it opens onto archaeological excavations.

If you’re a history buff, you’ll want to stop in at Panteão Nacional, a museum that celebrates famous Portuguese figures. Perched on a hill above Campo de Santa Clara in Graça, the museum’s baroque architecture, lavish marble interior, and great views of the river add to the overall experience.

If you prefer art and architecture to history, opt instead to join us on shore excursion to the Lisbon Tile Museum. Dedicated to the beautiful ceramic tiles that decorate many of Portugal’s buildings, the museum is home to tilework dating back to the 15th century. 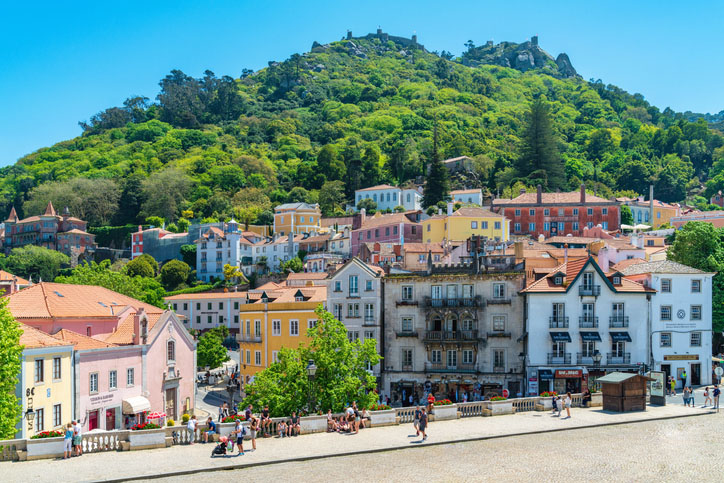 If you’re looking for a day trip outside of Lisbon, visiting Sintra makes a great day trip. The idyllic village is located only 28km away from Lisbon and is easily accessible by car, train, or shore excursion. 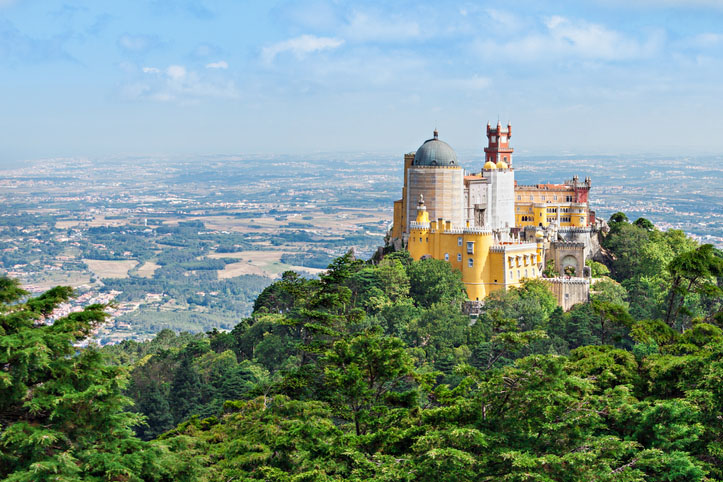 Sintra is a popular day trip destination thanks to a few memorable landmarks. The most iconic is Pena Palace, a spectacular Romanticist castle perched high in the Sintra mountains. It’s simply stunning, and a must-visit. The palace dates back to the Middle Ages and has served as a chapel, a monastery, and a summer royal residence. Today, it is a UNESCO World Heritage Site and one of the Seven Wonders of Portugal. In addition to touring the palace, you’ll want to devote time to exploring the surrounding forests and garden. 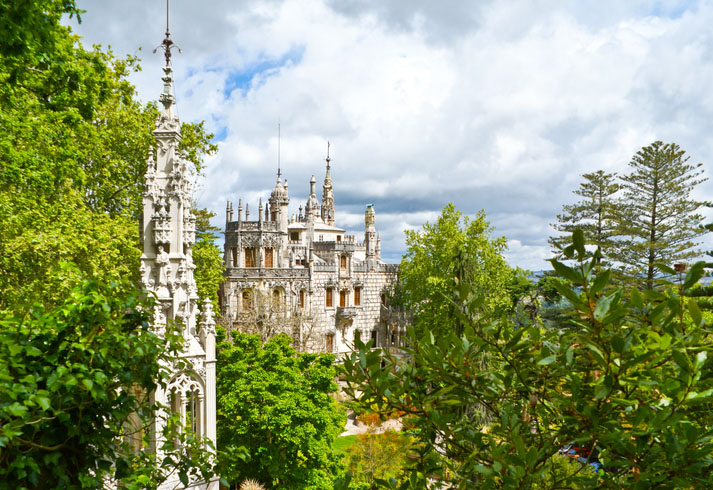 Your next stop in Sintra should be Quinta da Regaleira, which answers the age-old question "What do you get when a Brazilian coffee tycoon commissions an Italian opera set designer to create his villa?" The sprawling estate is most notable for its exterior. A vast park complete with a labyrinth of tunnels and grottoes surrounds the intricate, palatial home. Two ceremonial “Initiation Wells” on the property more closely resemble underground towers, which visitors can descend via spiral staircases.

If you haven’t yet had your fill of palaces and castles, you can visit the mountaintop Moorish Castelo dos Mouros, and the Gothic-meets-Manueline Palace of Sintra in the town’s historic center.

4. TAKE THE FUNICULAR TO BAIRRO ALTO.

Lisbon’s Bairro Alto, or “Upper City” neighborhood is perched on one of the city’s famous “Seven Hills of Lisbon”. This part of the city is home to eclectic antique shops, great restaurants and bars, and beautiful, historic buildings. 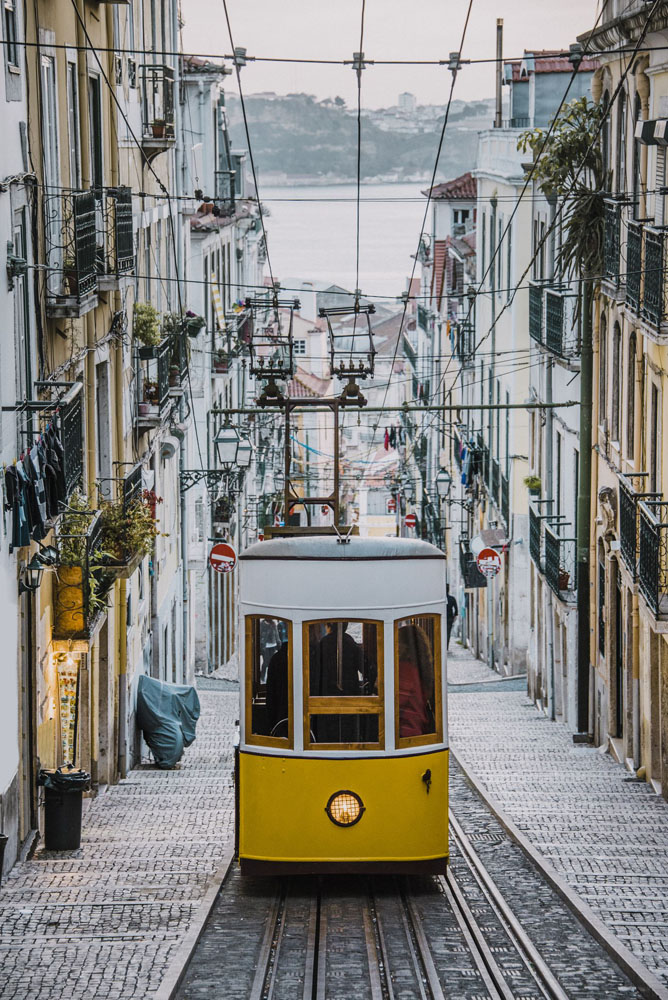 Avoid walking uphill to the neighborhood by taking the historic Gloria Funicular. Opened in 1885 and is considered a national monument, the Gloria Funicular is a railway line that makes it easy to navigate Lisbon's hills. Just hop on at Restauradores Square in Lisbon’s Pombaline downtown and enjoy the ride all the way up to the Miradouro de São Pedro de Alcântara. This look-off point is the perfect place to snap photos and enjoy views of the city, including the iconic São Jorge Castle. Take some time here to enjoy the beautiful gardens, complete with fountains and Greek busts. You can even order a glass of wine or beer from one of the hilltop’s open-air stalls.

While you’re exploring Biarro Alto, pay a visit to the Igreja & Museu São Roque, a stunning 16th-century cathedral and adjoining museum. Don’t let the plain façade fool you — the marble and gold interior of this church will take your breath away.

Biarro Alto is known for its great nightlife scene. Settle in at a rooftop restaurant, take in some live music at a jazz club, or dance the night away.

5. BREEZE OVER TO BELÉM.

Belém is a district in Lisbon located at the mouth of the Rio Tejo, just west of the iconic 25 de Abril Bridge. The area is home to two of Lisbon’s most iconic sights: the Torre de Belém and the Mosteiro dos Jerónimos. 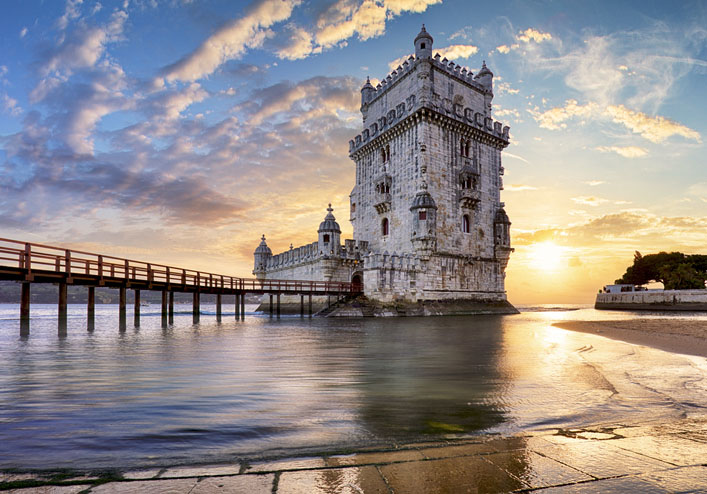 The Tower of Belém is a perfect example of Manueline architecture, with its elaborate vaulting, fanciful armillary spheres, and nautical-inspired detailing. It’s a UNESCO World Heritage Site that dates back to the 1500s. It served as the first line of defense at the mouth of the river and is a ceremonial gateway to Lisbon. Inside the fortress you can explore dungeons and, if you’re up for it, climb the tower’s narrow spiral staircase. You’ll be rewarded with breathtaking views at the top.

Belém’s other UNESCO-listed showstopper is Mosteiro dos Jerónimos, a monastery that serves as another pristine example of Manueline architecture. The site has a deep connection with Portuguese seafaring during the Age of Discovery. In 1497, Vasco de Gama and his crew spent the night at a church on the site before embarking on their Orient expedition. Construction of the current monastery and church began in 1501 and took 100 years to complete. Vasco de Gama is interred there today, along with the famous 16th-century Portuguese poet Luís Vaz de Camões. 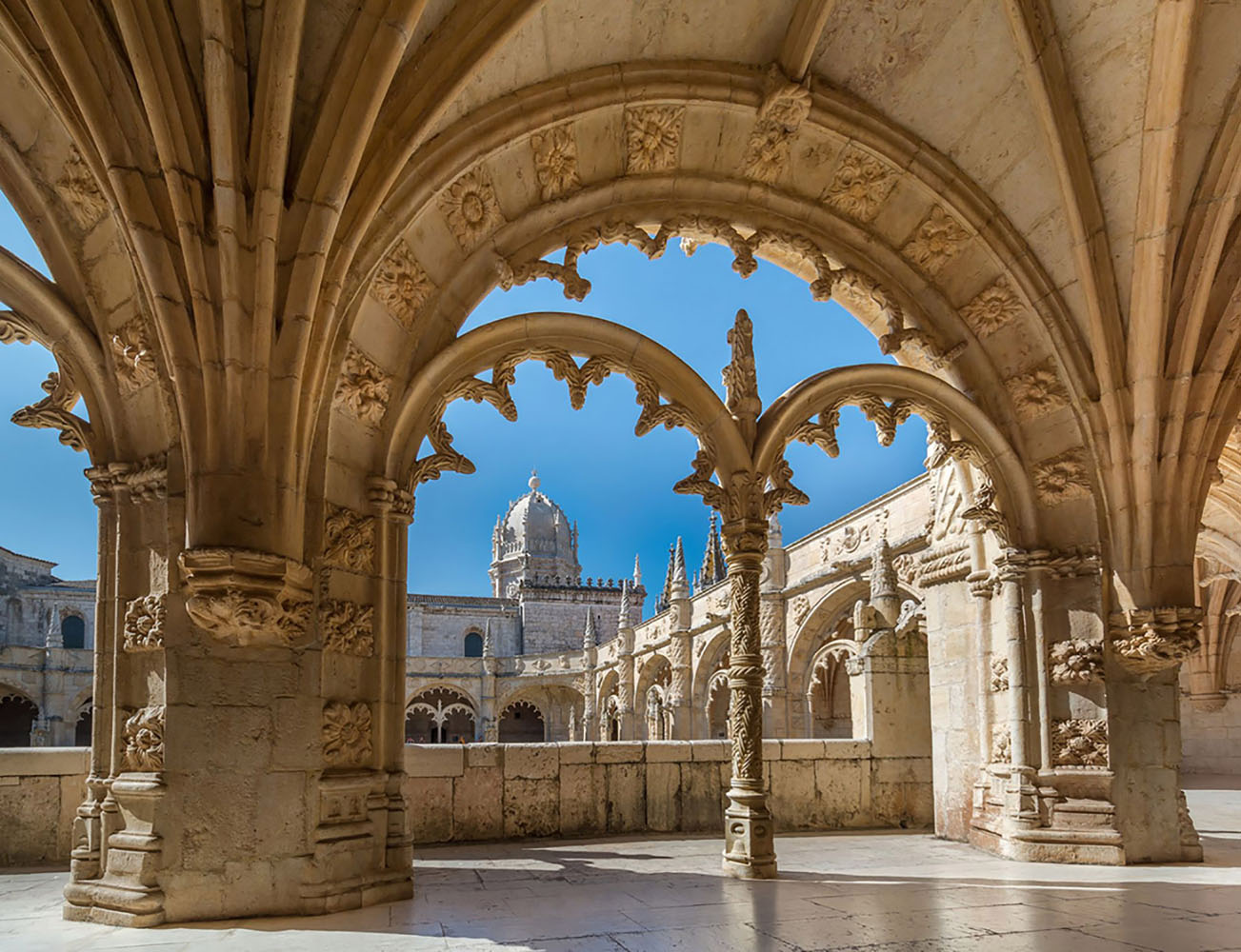 To say the monastery’s architecture is beautiful would be underselling it. It’s astounding. The cloisters are so intricate and detailed, you’ll want to pause to truly soak in your surroundings — appreciating the incredible arches, gargoyles, and turrets which have survived centuries. Take your time as you gaze upon the church’s ornate south portal and vaulted interior ceiling.

When all that sightseeing leaves you feeling peckish, stop in at Antiga Confeitaria de Belém – a patisserie that has been serving traditional pastéis de belém custard treats since 1837.

Of course, these suggestions for things to do in Lisbon have only scratched the surface when it comes to what the city has to offer! Because so many of our voyages embark or debark in Lisbon, it's easy to extend your stay here with our fantastic Land Program. Whether you want to explore Portugal's Sunshine Region or simply stay longer to see more, you can do it with us.

A Conversation with Elisabeth Vogel
Category: Stories to Inspire Your Future Travels

Vacations are made for indulging. And if you’ve been on an Azamara voyage before, you know we just love to spoil our guests. From incredible onboard...

Cape Kidnappers sounds like a fictional place. In fact, it even looks like a fantasy! However, I can assure you that it's a real place and it's...

Lee Abbamonte's Top Four Things to do in Melbourne, Australia

Melbourne is known globally as the little sister to Sydney, but those in the know...