Japan, “The Land of the Rising Sun”, has a way of shining a light that captivates every style of traveler. For those interested in urban living, Japan’s cities are bright and modern, combining technology that often feels futuristic with timeless traditions. Meanwhile, its rural areas offer an escape from the pace of city life, allowing you to dive in and explore the distinct charms and history of this fascinating part of the world. Perhaps most importantly, the people are warm and welcoming, and eager to share their experiences. A country-intensive voyage to Japan gives you time to immerse yourself in Japanese culture, all on one unforgettable adventure.

As you make your way through Japan with us, you’re bound to notice the country’s many castles, shrines, and temples. These beautiful, sacred places offer a unique glimpse into the history and customs of Japan. To help you as you plan your travels, we’ve highlighted some of the most striking of these structures to see and explore in Japan.

Japanese castles date back to the 14th century, and were a mainstay in fortifying Japan’s defensive forces in the years following. 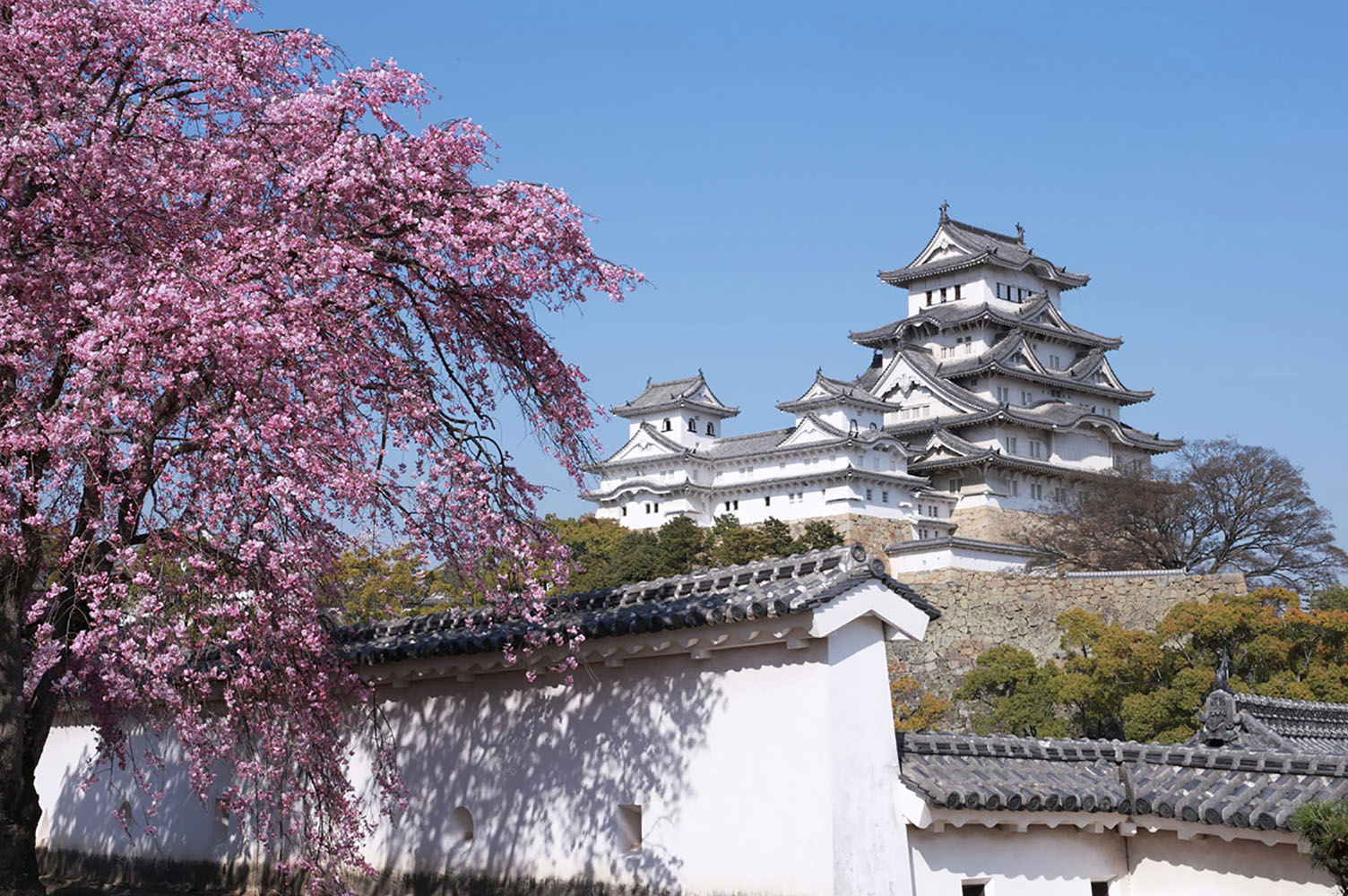 On a trip to Kobe, you’ll find two incredible castles. Himeji Castle, located in the nearby city of Himeji, is considered the best surviving example of classic Japanese architecture, and is recognized as one of Japan’s 12 original castles. Often referred to as the “White Heron Castle” due to its elegant bright white exterior, it was constructed in 1333 and remained in use until 1868. Across the castle grounds there is an impressive network of 83 buildings and advanced feudal defenses—making Himeji a must-see. Fans of Sean Connery’s James Bond might recognize the castle from You Only Live Twice. In fact, its use as a location in the film caused a bit of an uproar when rumors began to spread that steel darts used in the film became embedded in the castle’s wooden walls. Luckily, the castle was able to withstand this attack and is still standing today. 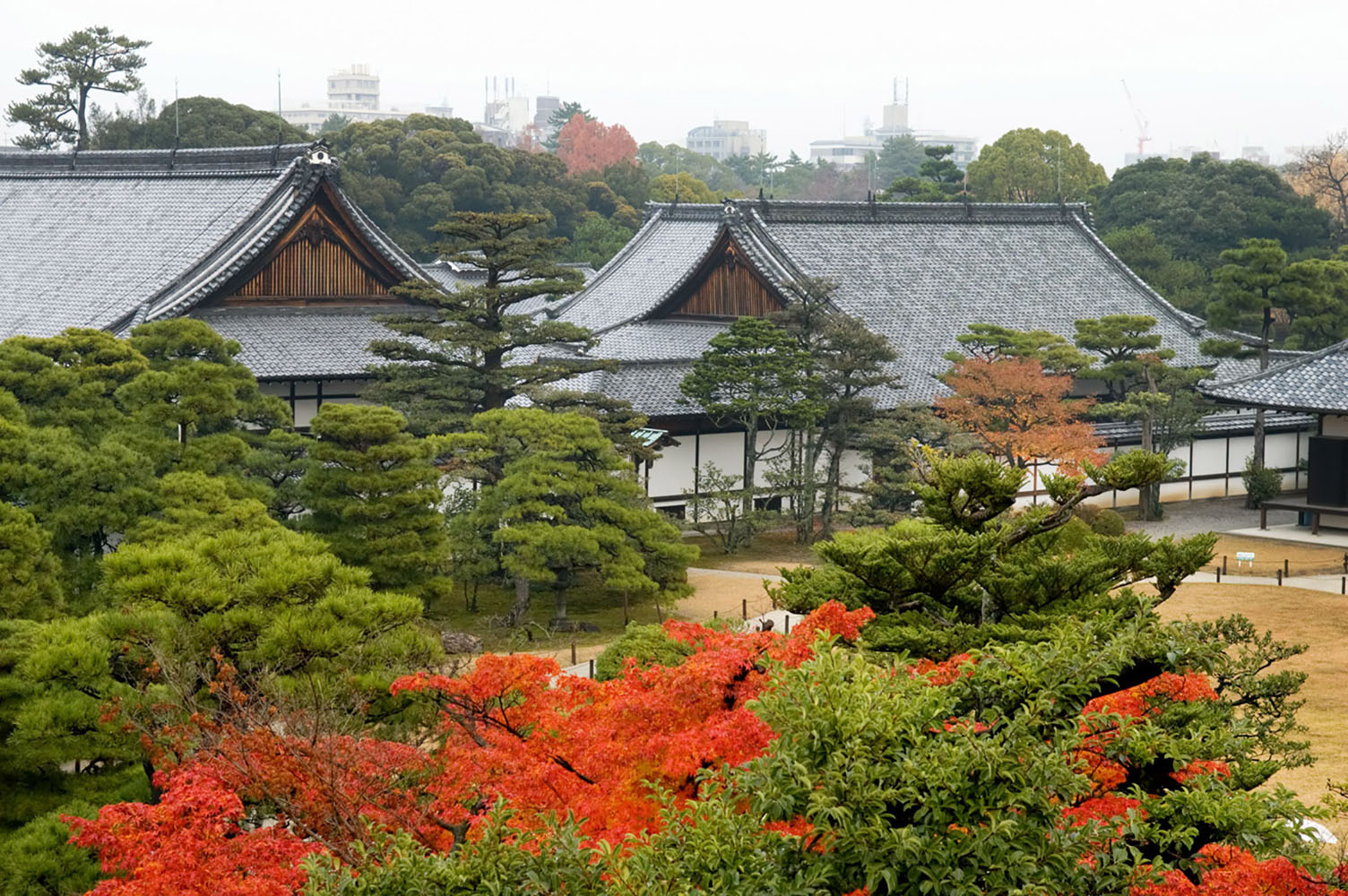 Built in the 17th century, Nijo Castle in Kyoto is one of the seventeen Historic Monuments of Ancient Kyoto. Stone walls and moats protect the castle grounds, and its gardens—located between the two main rings of fortification—feature beautiful plum and cherry trees. Named a UNESCO World Heritage Site in 1994, you can experience this historic property firsthand on one of our shore excursions. 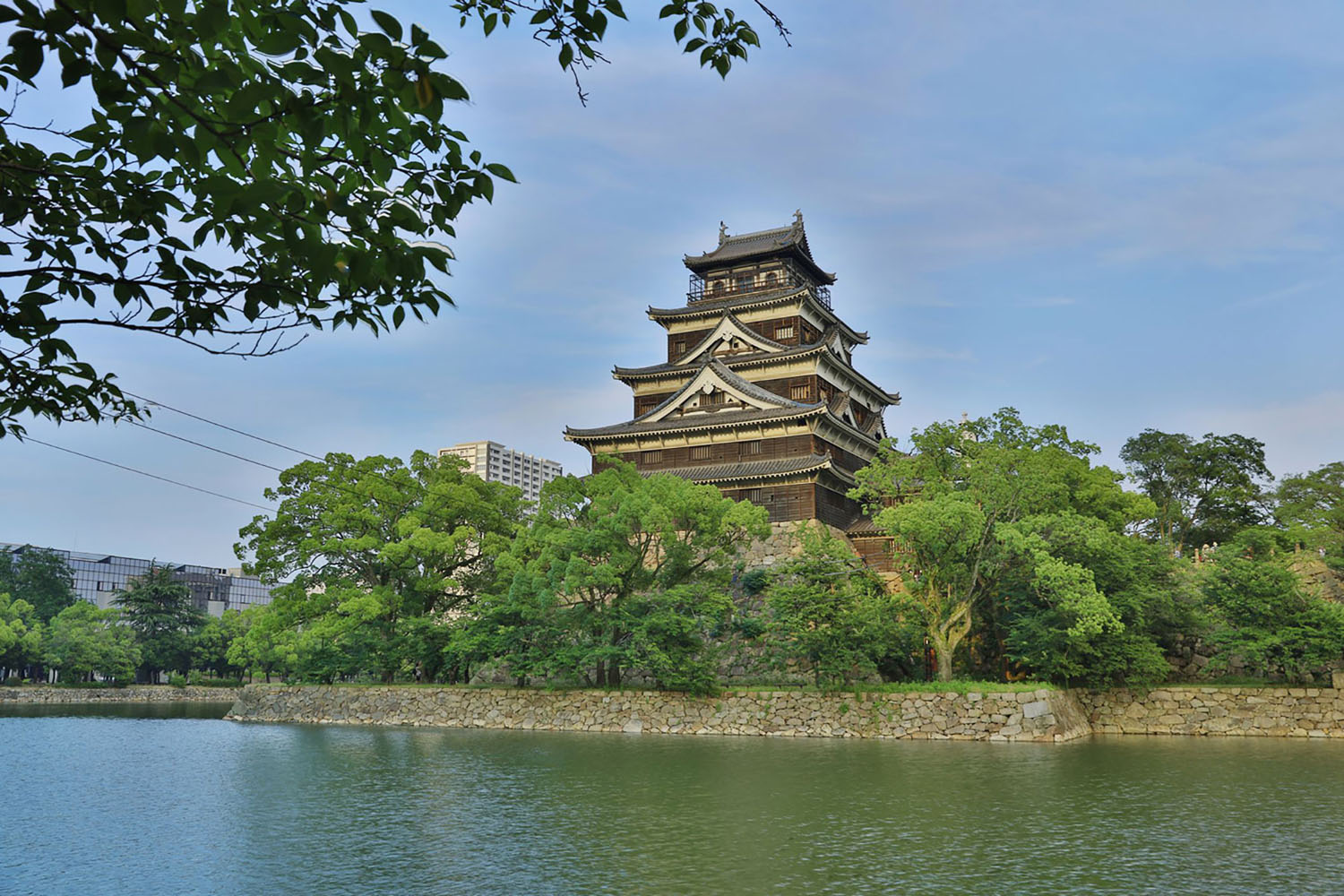 Several castles in Japan have also been meticulously restored or recreated after being destroyed. Kanazawa Castle, which operated from 1580 to 1871, was ravaged by a fire in 1881. It has since been restored and can be visited when touring the adjacent Kenrokuen, one of the Three Great Gardens of Japan. Kokura Castle in Kitakyushu was also decimated by fire in the 1800s, but was reconstructed in the mid-1900s to its former glory. Hiroshima Castle was tragically destroyed by the atomic bomb in 1945, but a replica, finished in 1958, now stands in its place. Get an up close look at the Hiroshima Castle, along with plenty of other landmarks in the area, when you travel to Japan with us. 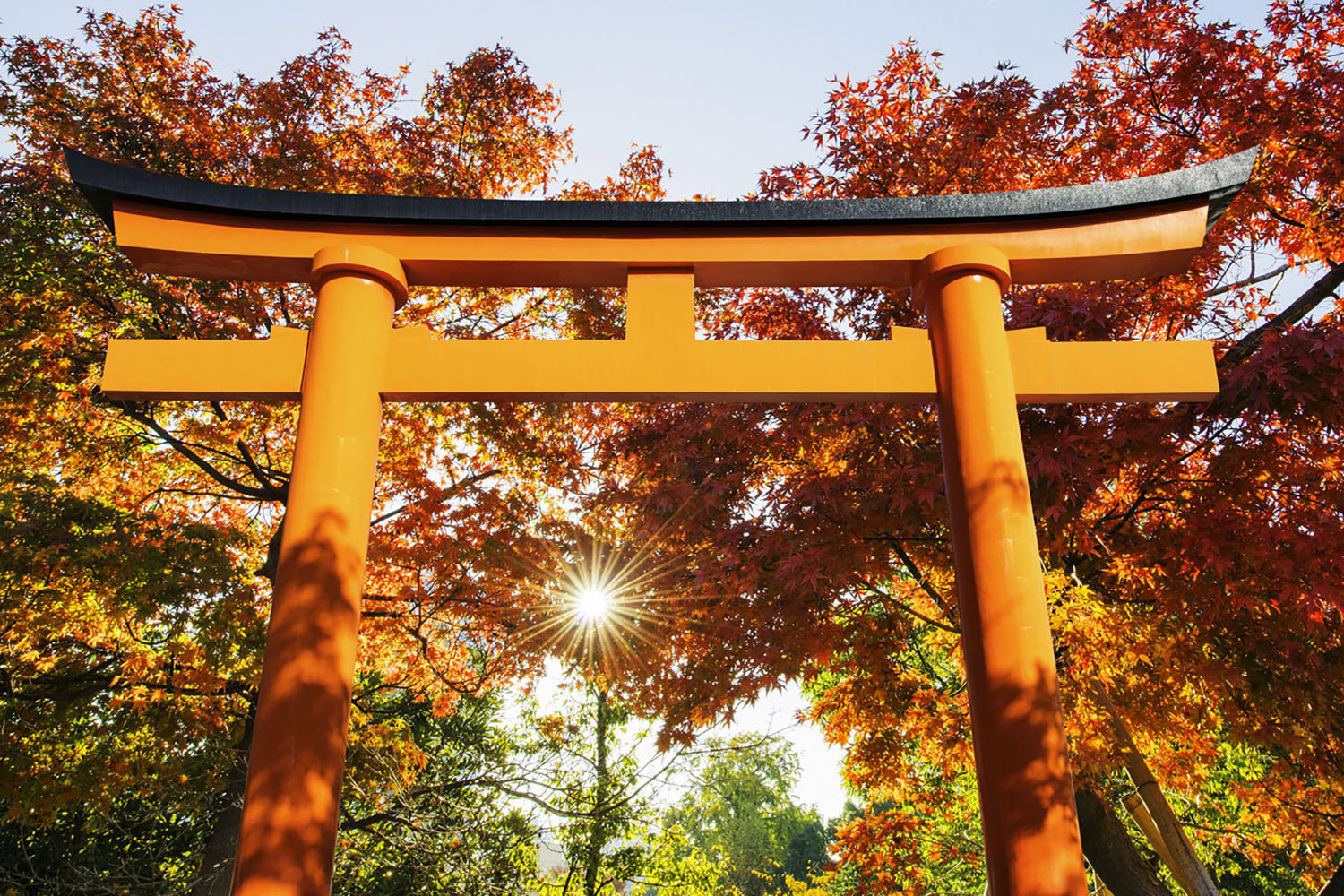 Shinto Shrines are the dwellings of the kami, Shinto deities. These deities can be forces of nature, elements of the landscape, and spirits or qualities of spirits. Loosely translated to English, kami means Gods, though this translation doesn’t fully capture what the word represents to followers of the Shinto religion. Kami are one with nature, representing both good and evil, and positive and negative characteristics.

In Tokyo, a trip to the Meiji Shrine should be on your schedule. Dedicated to the deified spirits of early 20th century Emperor Meiji and Empress Shōken, construction of this shrine began in 1915 and was completed in 1920. Unfortunately,  it was quickly destroyed during the Second World War, before being recreated in the 1950s. While it’s not Japan’s oldest or most sacred shrine, the complex is surrounded by a 170-acre forest and is a relaxing natural retreat in the heart of the bustling city.

Fushimi-Inari Taisha in Kyoto (near Kobe) is the head shrine of the kami Inari, a God integral to rice cultivation. It’s famous for its long hallways made of thousands of red torii, sacred Japanese gates. It was founded in 711, though the main structure was built in 1499. Fushimi-Inari Taisha shrine sits at the base of Mt. Inari-san, and is the starting point of the Fushimi-Inari hike—a trail up the mountain lined by torii, as well as many smaller shrines. Admire some of Kyoto’s finest shrines, temples and gardens on an immersive shore excursion into Japan. 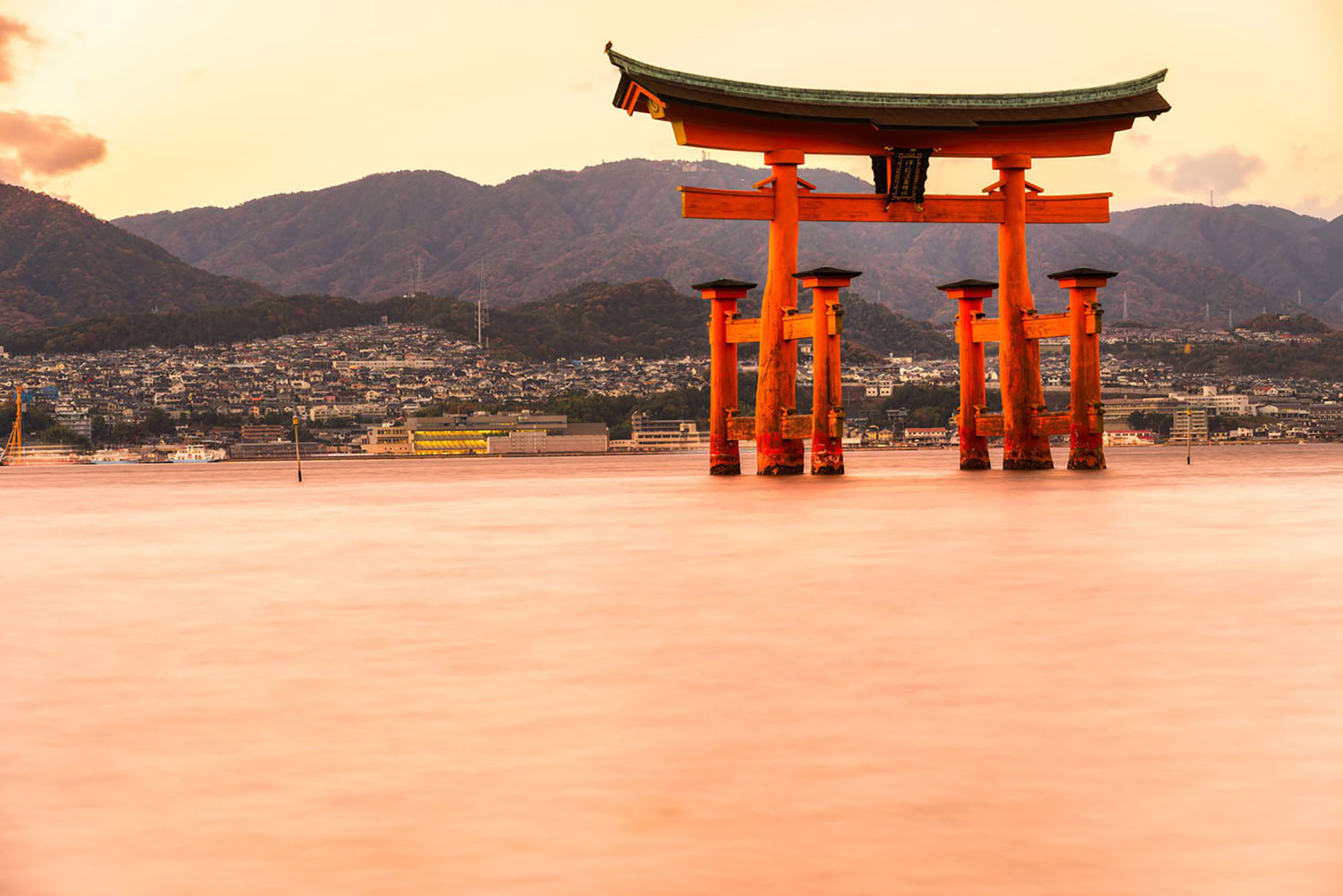 Visit Itsukushima Shrine on the island of Miyajima near Hiroshima to see the iconic 50-foot tall ‘floating’ torii. A visual marvel when the gate is partially submerged at high tide, it’s common for locals and tourists alike to kayak through the opening. Even at low tide, the torii remains popular, as visitors can walk on the bay floor to get a closer look at the structure. While many believe the first shrine structures here were built in the 6th century, today’s iteration of the shrine was actually designed in the 12th century. This UNESCO World Heritage Site is definitely the main attraction on the island of Miyajima, especially considering Miyajima translates to ‘Shrine Island’.

Temples are places of worship in Japanese Buddhism.

Two temples make Japan’s old capital, Kyoto, an alluring place to visit. Both can be experienced on one of our shore excursions, and are among the seventeen Historic Monuments of Ancient Kyoto. 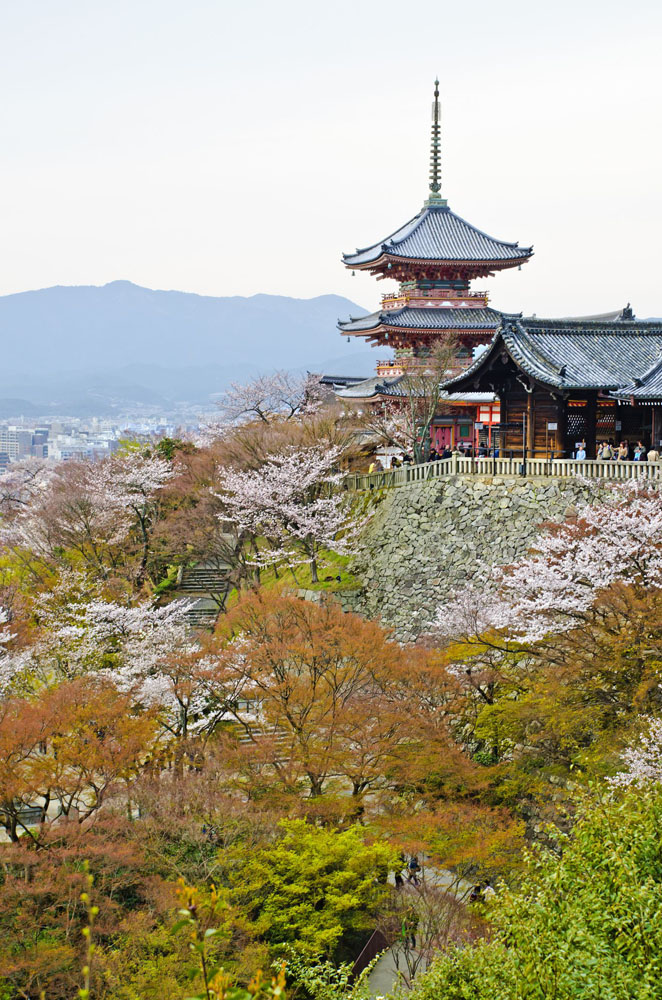 The temple of Kiyomizu on Mount Kiyomizu was founded in 778, with the current structures dating back to 1633. One of the details that makes this temple so special is that the entire structure was built without using a single nail, instead it uses a network of rails and pillars that penetrate each other, creating a strong and sturdy building. A waterfall runs beneath the temple, emptying into a pond below, creating a tranquil atmosphere you'll count yourself lucky to experience.

Also in Kyoto is Kinkakuji, more famously known as “Temple of the Golden Pavilion”. Its striking beauty and unique history has made it one of the most popular sights in Japan. The main hall is covered in gold leaf and is surrounded by a gorgeous reflecting pond. The building was constructed in 1397 as a villa for a shogun, a feudal lord, but it was his son who eventually converted it into a temple. In 1950, a young monk, obsessed with the temple, burned it to the ground. This story was made famous in a 1956 book, The Temple of the Golden Pavilion. Following the fire, the temple was rebuilt in 1955.

In Kanazawa, a stop in Teramachi will introduce you to a range of beautiful temples. This neighborhood is home to around 70 of them, including Myoryuji, also known as Ninjadera, or, “Ninja Temple”. Built as a place of worship in 1585 and moved to Teramachi in 1643, Myoryuji was used as an armed outpost in its new home. It’s famous for having many trap doors and secret passageways. This dual purpose makes it one of Japan’s most compelling buildings and inspired its nickname.

In Hiroshima, pay a visit to Fudoin Temple. It’s one of only a handful of buildings to survive the 1945 atomic bomb, making it a true persevering landmark in the area. It’s also surrounded by beautiful momiji trees, Japanese maples that have long been a symbol of Hiroshima.

Discover Even More Of What Japan Has to Offer

Castles, shrines, and temples are only scratching the surface of Japan. Discover more when you read our article on “Seven Things To Do In Japan”. Or, start planning your adventure today by browsing our upcoming voyages to Japan.

A Taste of Spain
Category: Cuisine

What to Expect in Spain and the Canary Islands
Category: Destination Immersion

Seven Reasons To Cruise To Alaska

We have a confession to make. There are more than seven reasons to cruise to Alaska. In fact, there are too many reasons to count, or at least to write...

Planning a vacation can be hard. You not only have to decide what kind of getaway you want, your vacation plans often also have to appeal to the travel...