Peru might not be as famous a travel destination as South American neighbors like Brazil and Argentina, but if you ask us, that simply adds to its charm. Cruise to Peru with us and you’ll come to understand why. Peru is a kaleidoscope of complex cultures, mystical ancient history, sophisticated cities, and astounding natural wonders.

Are you planning a trip to Peru, or just curious about what the destination has to offer? We’re here to help. These are a few of the best things to do in Peru.

South America’s most famous archaeological site is a bucket list destination for many travelers. And just because it’s nestled in the heart of southern Peru doesn’t mean you can’t see it during a South American cruise. It’s as easy as adding a pre- or post-cruise Land & Sea Package to your voyage! 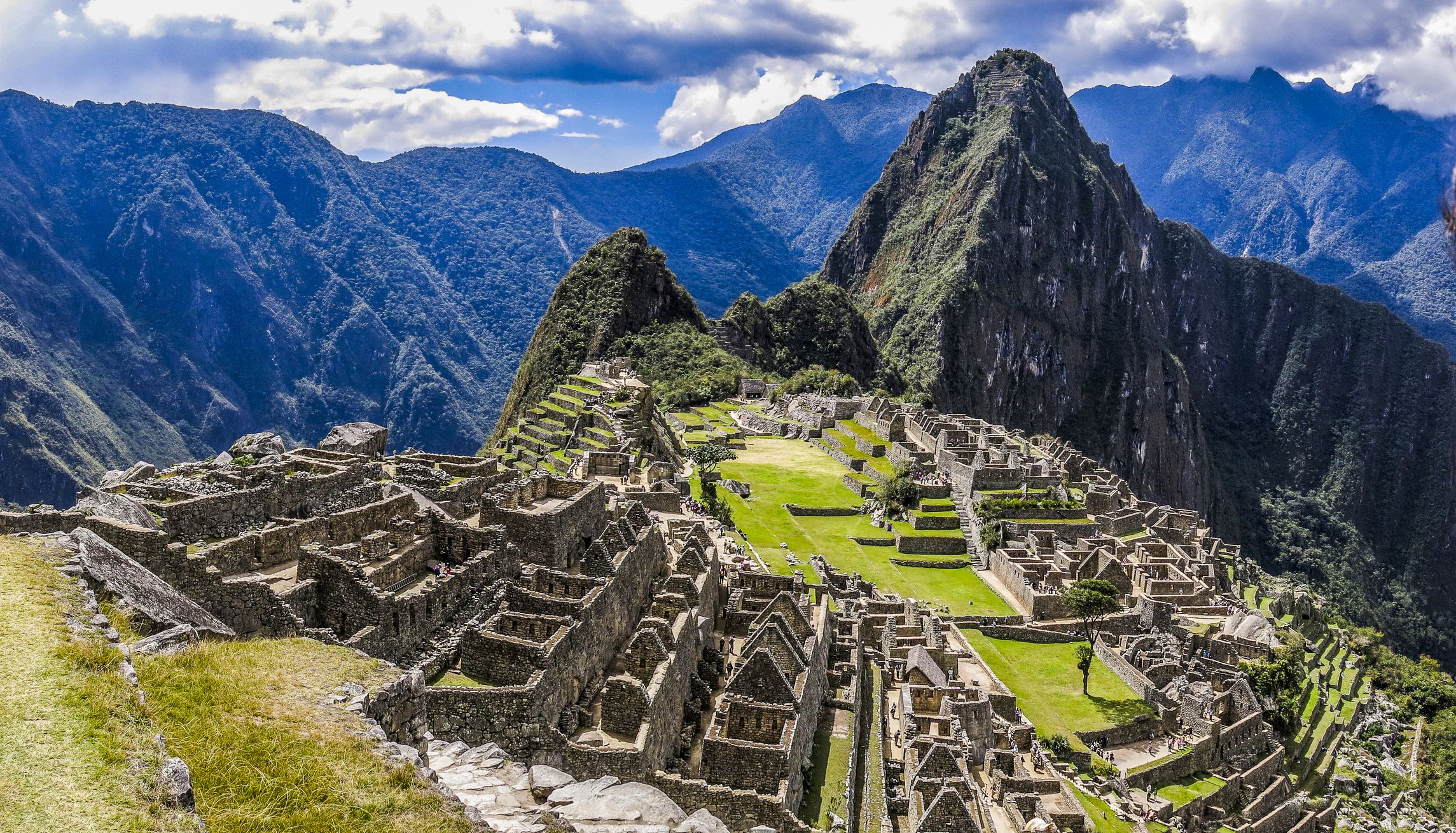 It’s believed that the Incas constructed Machu Picchu around 1450 as an estate for the emperor and abandoned it around a century later. Its location, perched between two sharp peaks in the Andes Mountains, is likely why it went undetected by the conquering Spaniards. It wasn’t until 1911 that the outside world became aware of the wondrous site, after an American historian happened upon it while searching for the last Inca capital city, Vilcabamba. Today, it’s a UNESCO Heritage Site and one of the Seven Wonders of the New World.

The ruins are surrounded by lush greenery with a cover of mist that adds to the mystical atmosphere. These are the main structures of Machu Picchu:

Thanks to its large size and prime location on the Sacred Plaza, it’s thought that this temple is where large religious ceremonies occurred.

This carved rock pillar is oft mistaken for a typical sundial, but the name intihuatana loosely translates to “hitching post of the sun”. So, what’s that? Rather than using it to tell the time of day, Inca astronomers used the intihuatana to predict annual solstices.

The Temple of the Sun

This elliptical structure is adjacent to what’s thought to have been the Emperor’s residence. A rock inside the structure possibly served as an altar.

The Temple of the Three Windows

This structure is situated on Machu Picchu’s Sacred Plaza, with windows situated to display the sunrise.

What makes Machu Picchu so impressive isn’t any one structure, though. It’s the sheer size, enigmatic legend, and stunning location of the complex. 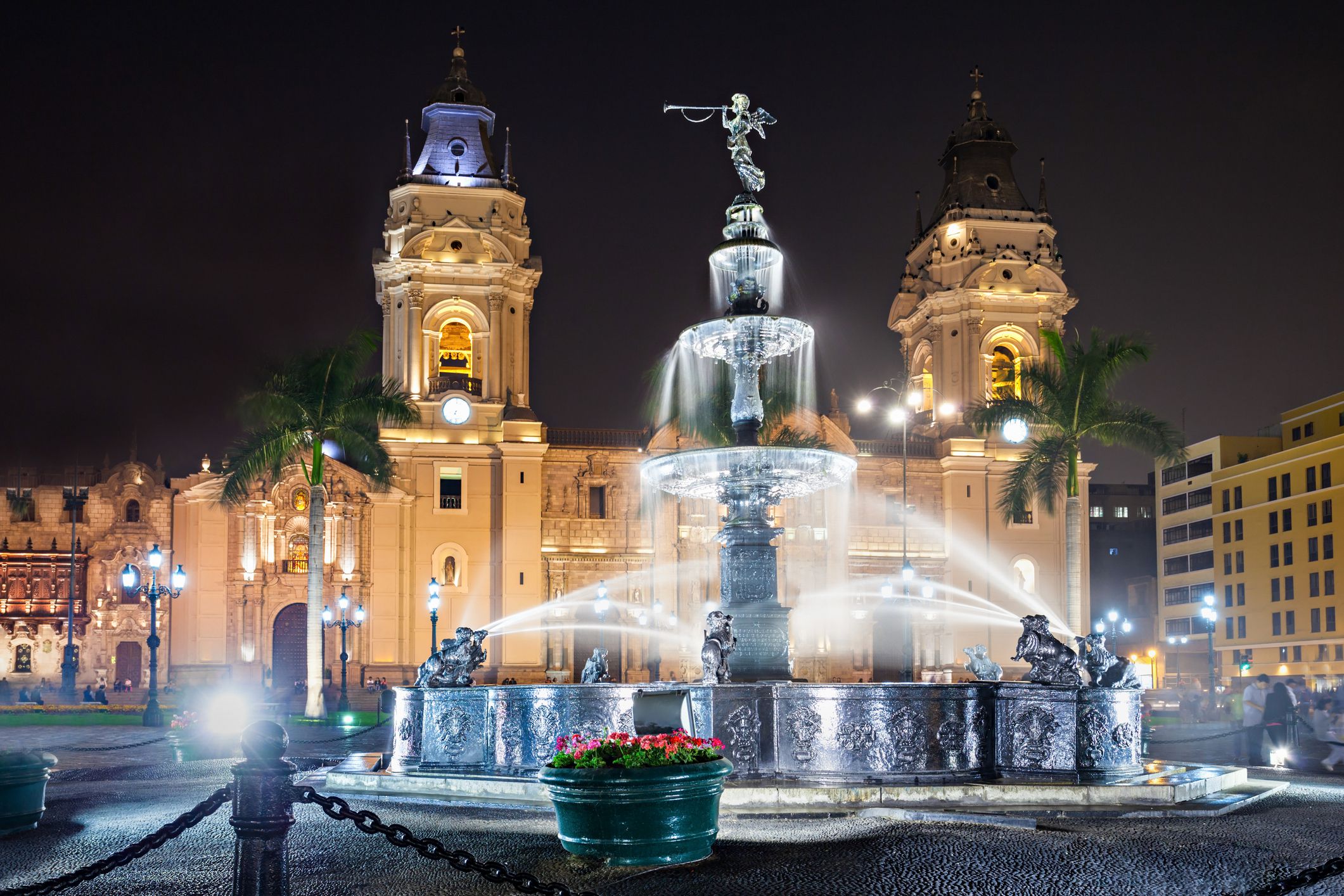 The area of Lima was originally occupied by the Inca and known by both Limaq and Itchyma. Lima was founded as a capital city in 1535, after the Spanish conquered the area. The historic center of Lima, also known as Ciudad de los Reyes (City of Kings), is of immense historic and cultural significance. It’s also, quite simply, a wonderful place to visit.

Lima’s architecture boasts Spanish Colonial, Spanish Baroque, and Spanish Neoclassical styles, as well as some French neoclassical and Art Nouveau styles. Intricately carved wooden balconies adorn many of the historic buildings in the neighborhood. A few of the historic center’s most impressive buildings include:

In addition to the historic center, the nearby neighborhoods of Miraflores and Barranco shouldn’t be missed. Miraflores is Lima’s most upscale neighborhood, while Barranco is favored by artists and writers and has a distinct bohemian vibe. We recommend exploring them on two wheels, during this bike tour.

These ancient geoglyphs in Peru’s Nazca Desert will impress you with their size and history. Scholars estimate that the massive designs date back to sometime between 500 BCE and 500 CE. The designs include simple lines and shapes, depictions of animals and humans, and floral designs. 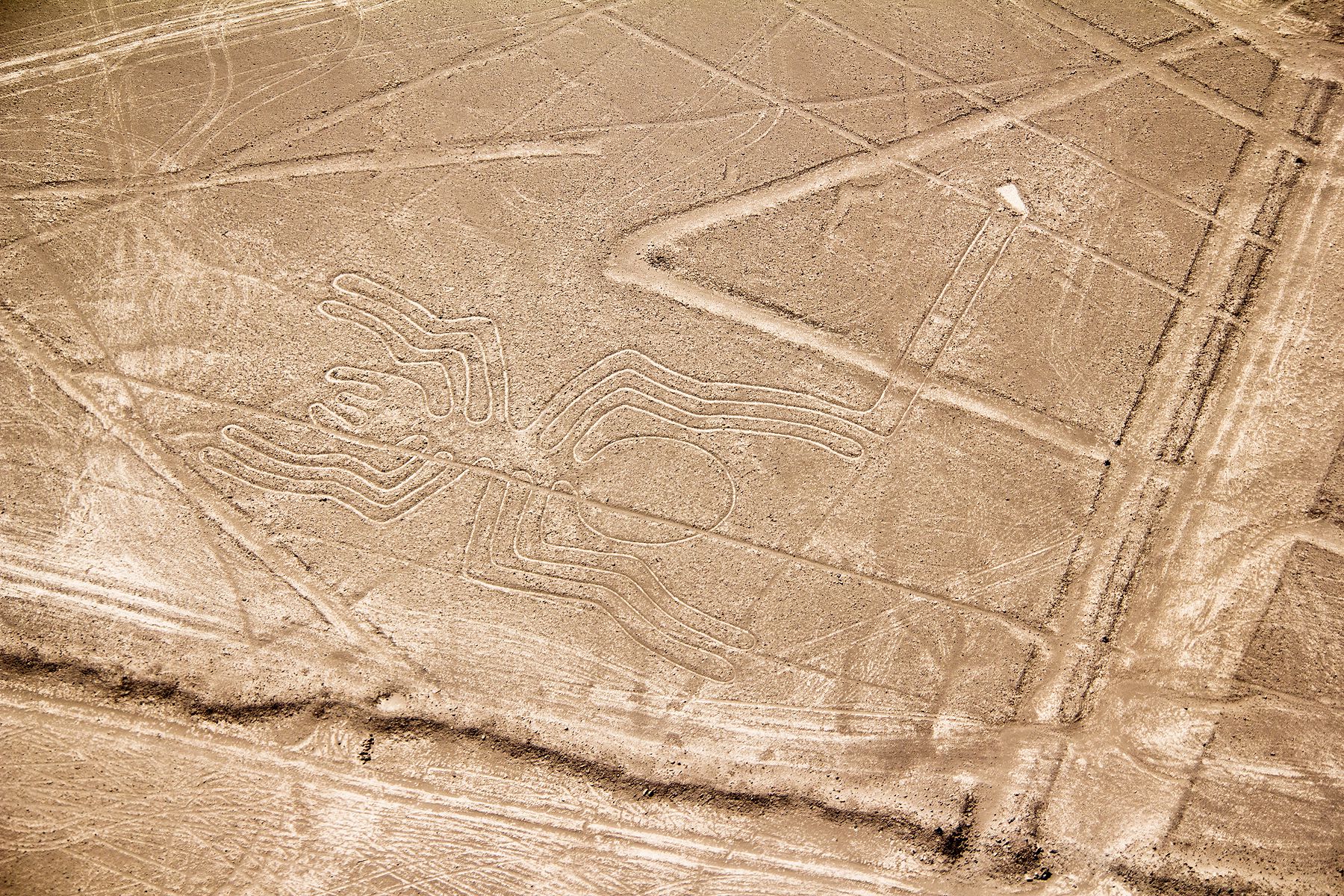 The geoglyphs are made with shallow lines in the ground, created by removing the reddish pebbles that cover the ground to reveal the lighter-colored ground beneath. Thanks to a lack of wind, dry climate, and isolated locale, the geoglyphs are well preserved.

The best way to get a sense of the sheer size of the geoglyphs is from above. When you cruise to Pisco, Peru, with us, join our Cruise Global, Adventure Local tour and fly over the mysterious Nazca Lines. Some of the geoglyphs span over 1,000 feet in length.

One of the highlights of cruising to Peru will be enjoying delicious Peruvian food! Peruvian cuisine can varies among the country’s regions. 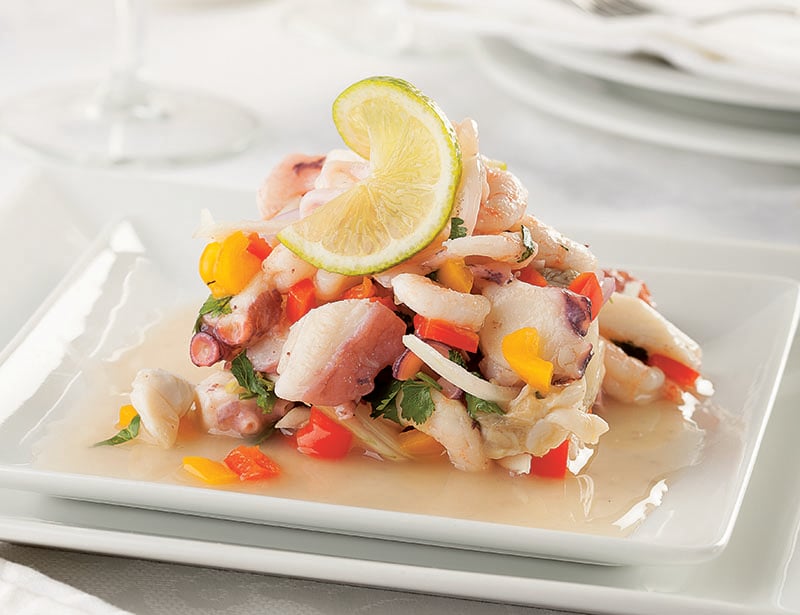 The cuisine of Peru’s coast, as you’d expect, makes frequent use of seafood. One of the country’s most famous and popular dishes is ceviche. Raw seafood (it could be octopus, tuna, sea bass, clams, sea urchin, or any other type of local seafood) is marinated, diced, and mixed with red onion and cilantro. It’s served everywhere from the fanciest restaurants to the humblest street food carts. Want to learn to make it yourself? Join us for a cooking class in Trujillo!

In the Andes Mountains, guinea pig (known as cuy) is a delicacy. It’s often seasoned and cooked over an open flame, but is also deep-fried and sold by street food vendors. Dining on guinea pig is a tradition that predates Incan times in Peru.

A visit to an organic farm is a fantastic way to explore the past and future of Peru’s culinary culture. You’ll learn about the essential ingredients of Peruvian cuisine (like potatoes, quinoa, and corn), and see how wind and solar energy powers the farm. Oh, and of course, you’ll partake in a delicious meal prepared with farm-fresh ingredients.

You’ll need a drink to wash down that incredible food, though. Peru’s national cocktail is the Pisco Sour, a frothy concoction made with Peruvian brandy. Pisco (also a city in Peru) is a white brandy produced by distilling grapes into a spirit. Authentic Peruvian pisco must be made in one of the country’s five official Denomination of Origin regions. It’s made in copper pot stills and is never diluted after being distilled. When you cruise to Lima with us, you can learn all about the art of handcrafting cocktails during a mixology class at an artsy boutique hotel.

Before the Incas, the Chimu people ruled Peru for centuries. Chan Chan was the Chimu Kingdom’s capital city, and the largest adobe city in the world. (That refers to the mud bricks exclusively used to construct the city.) The succeeded the Moche civilization around 900 AD, and were conquered by the Incas in approximately 1470. 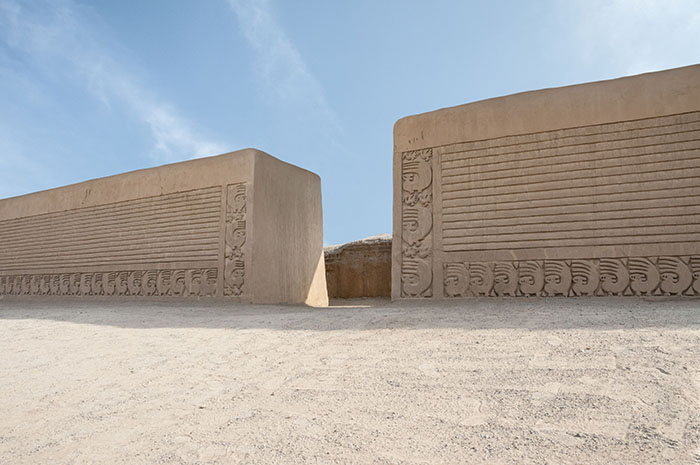 At its peak, Chan Chan would have been home to 100,000 people. Homes, temples, palaces, and other structures have been excavated to reveal a fascinating city. The Arco Iris Temple is among the best-preserved buildings and dates back to the 12th century. Chan Chan was built in one of the driest places on earth, yet a sophisticated irrigation system allowed their crops to flourish.

You can visit Chan Chan when you cruise to Salaverry (Trujillo), Peru.

Check Out the Paracas National Reserve

The Paracas National Reserve covers a huge swath of coastal land and tropical desert in Peru. It’s the oldest marine reserve in the country, designated in order to protect both the ecosystem and the cultural heritage of the Paracas people. 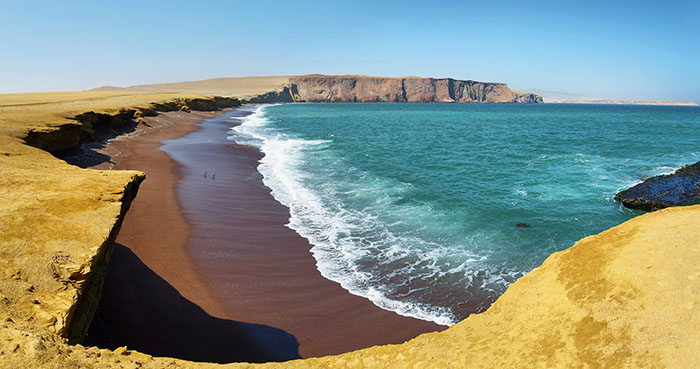 The reserve is renowned for its diverse wildlife (particularly birds), red sand beaches, and the Paracas Candelabra geoglyph—a design cut into soil that’s believed to date back to 200 BC.

A wildlife-watching tour is a great way to explore the Paracas National Reserve. Pack your binoculars, as you’re bound to spot many of the birds that call the reserve home. (More than 200 species are found here.) And birds are just the beginning! Dolphins, whales, turtles, and sea wolves occupy the coastal waters. For something a little more restorative, consider partaking in a Hatha Yoga class on the reserve’s red sand beach.

Cruise to Peru with Azamara®

When it comes to traveling in South America, you can’t beat an Azamara cruise. See the best of Peru and beyond during one of our voyages. You’ll love the diverse shore excursion options, and getting to enjoy our onboard amenities as your journey from one incredible destination to the next.

Music needs no translation to be understood and appreciated. It’s a cultural expression that transcends boundaries and borders, and offers an authentic...