Aboard The Azamara Journey - Part Three

The pace of port visits is picking up on this cruise onboard the Azamara Journey. We're visiting a new port, strike that, a new world every day now.

Liverpool is not at all what I expected. It's alive, modern and vibrant. Liverpool has a mix of history and ultra-modernity that works. It also has one of the most beautifully designed waterfronts I've visited by sea. There's a lovely pier dotted with modern museums, such as the Tate Liverpool, and historical buildings, as well as interpretive signage and even bicycles to rent by the hour. 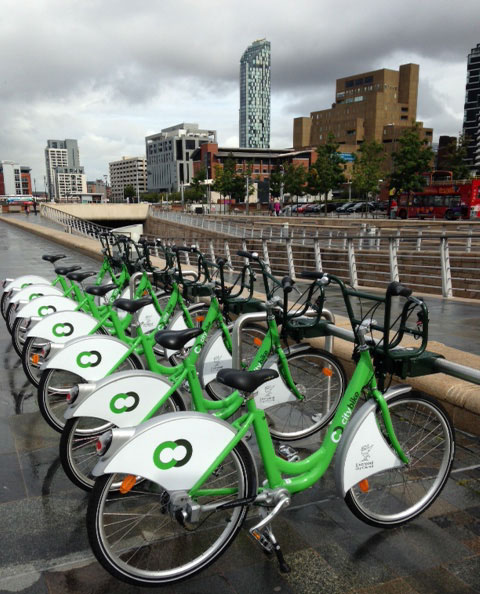 Being from San Francisco, I love a vibrant city and Liverpool seems to have it all. We found Bond Street, which my husband says was the Haight-Ashbury in its day. Now it's a hip street with boutiques and coffee shops. After walking quite awhile we decided to find a cafe and rest a few minutes. For no obvious reason we chose Bond Street Coffee. Glad we did. The owners are local lads happy to welcome the tired tourist. Without even prying, one young man came over to tell us that the coffee shop used to be called The Odd Spot, where the Beatles played twice in 1962, and he had a framed newspaper clipping to prove it. 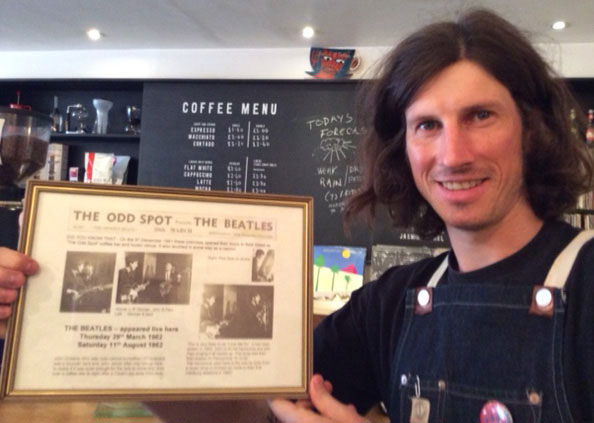 After coffee we found an out-of-the-way pub where John Lennon supposedly hung out. Ye Cracke hasn't changed a bit since the 1960's...it is still a neighborhood pub.  From there more site-seeing, a bite of fish & chips, and back to the ship for a quick nap.

Nighttime brought the spectacular complimentary AzAmazing Evening with a concert in the Anglican Church and upon return a fireworks display set to 60's British music, compliments of the Port of Liverpool. 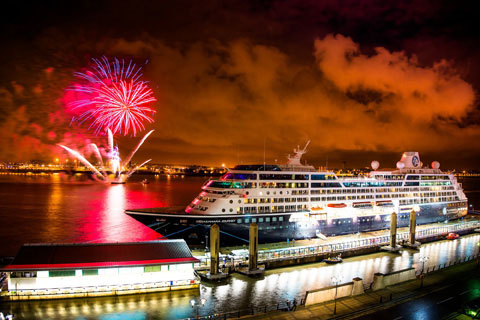 Next day we awoke in the sleepy small town of Holyhead, on the Isle of Anglesey, Wales. Night and day...from bustling metropolitan city to sailboats in a sleepy resort harbor. And I should mention the seas have been like glass so literally we went to bed and awoke in another world. Anglesey used to be a working industrial hub for coal mining, copper and aluminum. Now it seems to be a resort town with gorgeous white houses, flowering hydrangeas, and green fields with crops and sheep (12 million sheep compared to only 3 million humans.) 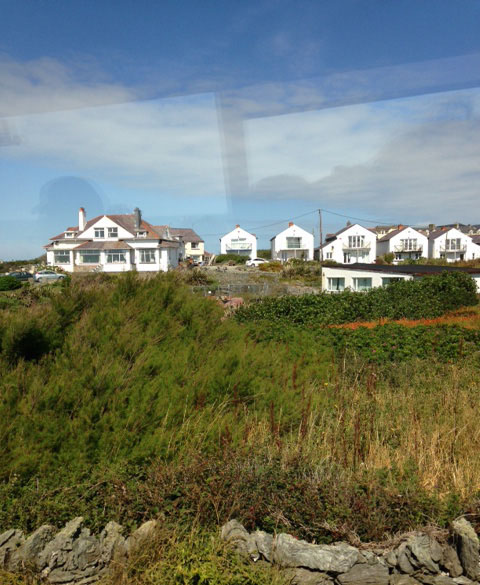 Peter and I took an organized panoramic bus tour in Anglesey...our first of the trip. We had a charming young local woman as our tour guide who told us all about her home island and even tried to teach all of us to speak a bit of Welsh. Good luck! This is the darnedest language with many guttural sounds unlike any heard before.

Many of the island's town names begin with "Llan", pronounced "thon", which translates roughly to "town of". One town name wins the  prize with 58 letters: Llanfairpwllgwyngyllgogerychwyrn­drobwllllantysiliogogogoch.

This translates roughly to "quaint scenic town located near to where Prince William and Duchess Kate spent three splendidly happy years while the handsome Ducati-riding prince was a macho RAF search-and-rescue helicopter pilot and the gorgeous, thin, super-friendly Duchess had her photo snapped pushing a shopping cart in the local grocery mart." (Ok, perhaps I'm mixing up the cheerful anecdotes we heard aboard the tour bus?!)

All in all, two interesting days exploring divergent cultures of the UK.

Our Azamara Ashore Land Experiences combine land and sea travel in a way that promises authentic, enriching experiences for explorers across the globe....

Infographic: How To Pack For The 2018 World Journey

Packing for a long trip can be tricky, especially when you’ll be visiting multiple locations in different climates. During the 2018 World Journey, guests...

Mexico evokes many different things for many different people. For some, it’s all blissful beaches and sunny seaside resort towns. For others, it’s...